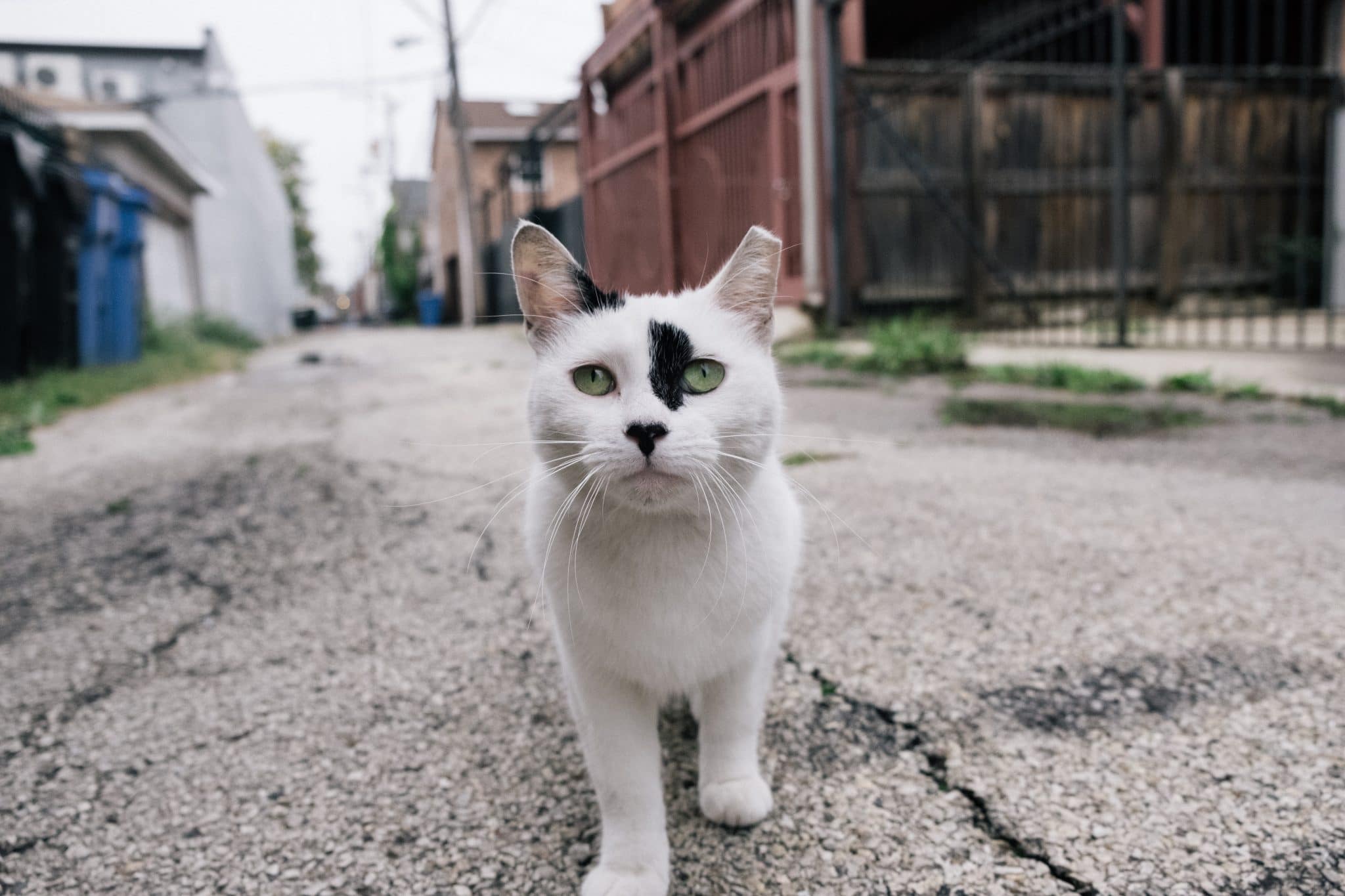 As the sun dips beneath the rooftops on Throop, Kevin wakes, yawns and stretches across the asphalt. He sniffs, tasting the usual street delicacies on the air: Birrieria Reyes de Ocotlan’s beef cheek, chicken and pickled onion at Pollo Express, and the distant sweet tang of Honky Tonk wood-roasted BBQ. The smells of Pilsen mingle: a rathole buried in the blockade between 16th and the railroad tracks. Spray paint. Dirt. Leaking oil. Metal. 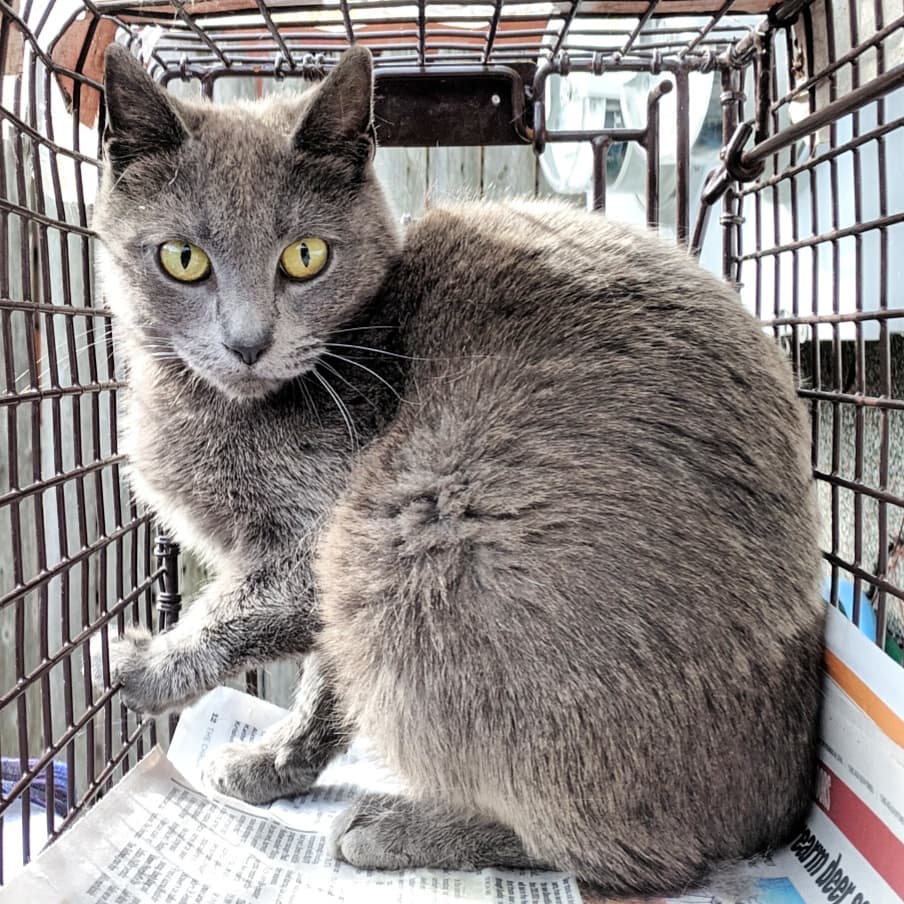 Kevin’s ears perk. The smell of mackerel can only mean one thing: Castle Blackpaw must be somewhere nearby, TNR-ing kittens today.

Kevin trots down the alley. Up ahead, a clump of pale, flaky meat cooks on the sidewalk, pooled by sweet, stinky juice. A few feet away, another meat pile and another beyond that.

Kevin, who bears a clipped left ear like a badge of honor, doesn’t take the bait. He knows not to follow that trail of breadcrumbs to the literal trap that lies in wait at its end.

Nearby, he hears a metallic click: a camera snap. Kevin turns and sees one of his many admirers, Valerie Shouldis. She lurks like paparazzi. Kevin trots forward, arches his back against her shin, and rolls on the ground so she can fawn, give him a scratch and take his photograph.

“Kevin is just giving me the same poses as last year,” Shouldis posts for her Instagram, “Cats Of Pilsen.” She’s been snapping pictures of the neighborhood’s abundant street cat population since 2018. Last year, she sold calendars, the proceeds going to local animal shelters. “I told [Kevin], a good #meowdel should be able to show some range!”

Kevin is the “Cats of Pilsen”’s coverboy, his green-eyed, round white mug splotted by an infamous black eye patch. He’s a superstar stray along this stretch of Pilsen turf. A local mechanic has fed Kevin for nine years. (Most street cats only live to five or six.) Commenters fawn over his photos and message, “I know that cat!” They call him Pirata/Pirate, Wilson and Oreo.

He is a cat with no name and many names, who belongs to no one… and everyone. 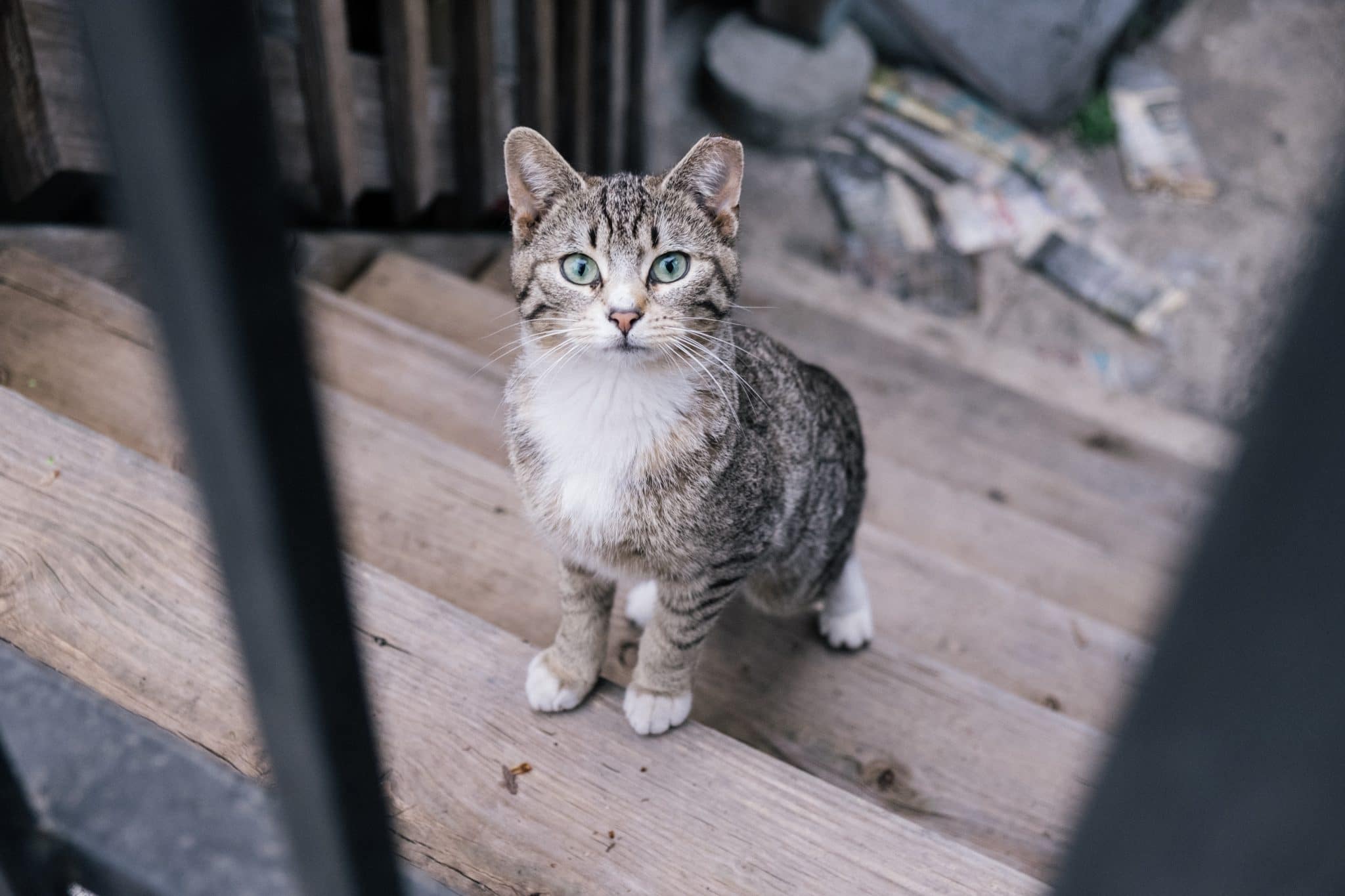 And he’s not alone. An estimated 200,000 stray cats roam Chicago. Neighborhood numbers are hard to come by, but one volunteer who worked South Side “epidemic areas” claimed to have personally trapped close to 400 cats over a two-year period in Pilsen alone.

“You’re running through alleys with wet food on your pants, feeling like a dumpster Disney princess,“ says Autumn Ganza, a force to be reckoned with in the cat-trapping community. She is the volunteer mastermind behind Castle Blackpaw, her own grassroots TNR community project. “You kinda start doing a thing, and people see you’re doing something that not a lot of people are doing, and they start asking for help.”

TNR—or, trap-neuter-return / trap-neuter-adopt—is the most effective, humane way to curb stray cat populations. A single pregnant female could birth a litter of a dozen kittens every twelve weeks. Not all are suitable for adoption, so rather than resorting to euthanasia or overcrowded shelters, TNR-ing finds, fosters or returns these furry denizens to a neutered life on the streets. When a cat colony has been stabilized, Ganza explains, “There are no more kittens. After they’re all vetted, they fight less, there’s no breeding aggression, no mating season, no crazy hormones. Usually there’s a caretaker. If not, we try to swing by, set up feeding stations and keep them fed once a week. Any cat who’s injured gets taken in for a feral maintenance package.”

Street cats benefit neighborhoods by hunting rodents: rats, mice, and even snakes. But if not spayed or neutered, the cats breed out of control—which is why TNR-ing is important. 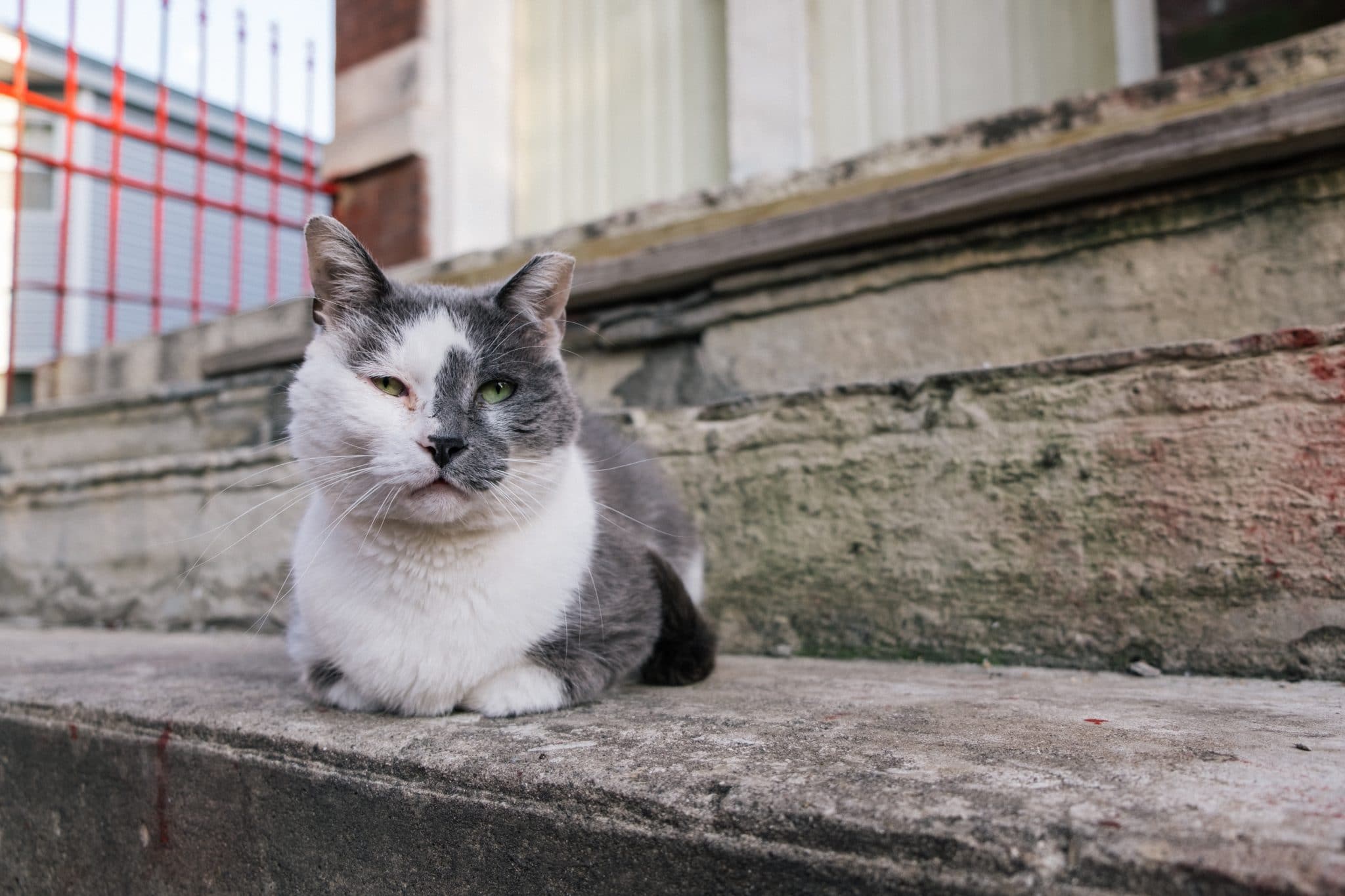 TNR trappers coerce strays into humane traps, then take them to PAWS Chicago to be vetted. A typical spa treatment at PAWS includes spay/neuter surgery, vaccinations, flea treatment, de-worming, tattooing, microchipping, and ear-tipping—or, clipping the edge off the cat’s left ear as a visual cue to future trappers. The cost for these services in low-income areas is $45.

PAWS has locations around Chicago and offers free TNR as a part of the Our Community Cats program in eight Chicago zip codes, but Pilsen isn’t one of them. When combating a feral cat population in the hundreds of thousands, there’s only so many resources PAWS can provide, and the South Side has a host of other issues that contribute to its street cat population. North Side neighborhoods have Tree House Humane Society and Harmony House for Cats, as well as more volunteers… and more money.

“Some people [on the South Side] are unable to take care of their own pets, so they end up putting them out,” says Ganza, who cites abandonment, economic pitfalls and a lack of education about modern pet care services. Many animals end up on the street, where they mingle with ferals and birth litters that exponentially increase the problem. Neighbors try to help the cats, she says. “There are a lot of feeders, people throwing out whole rotisserie chickens and beans and rice. They’re obviously trying.” But without TNR, the cat population will continue to grow.

Ganza and an army of volunteers have stepped up and taken ownership of the issue without additional city resources, treating the “trash cats” as their own and educating the neighborhood about what can be done to help. “I help people vet pets when [owners] can’t afford it. When I get food donations, I give them to feeders who can barely afford to feed themselves, let alone the cats.” 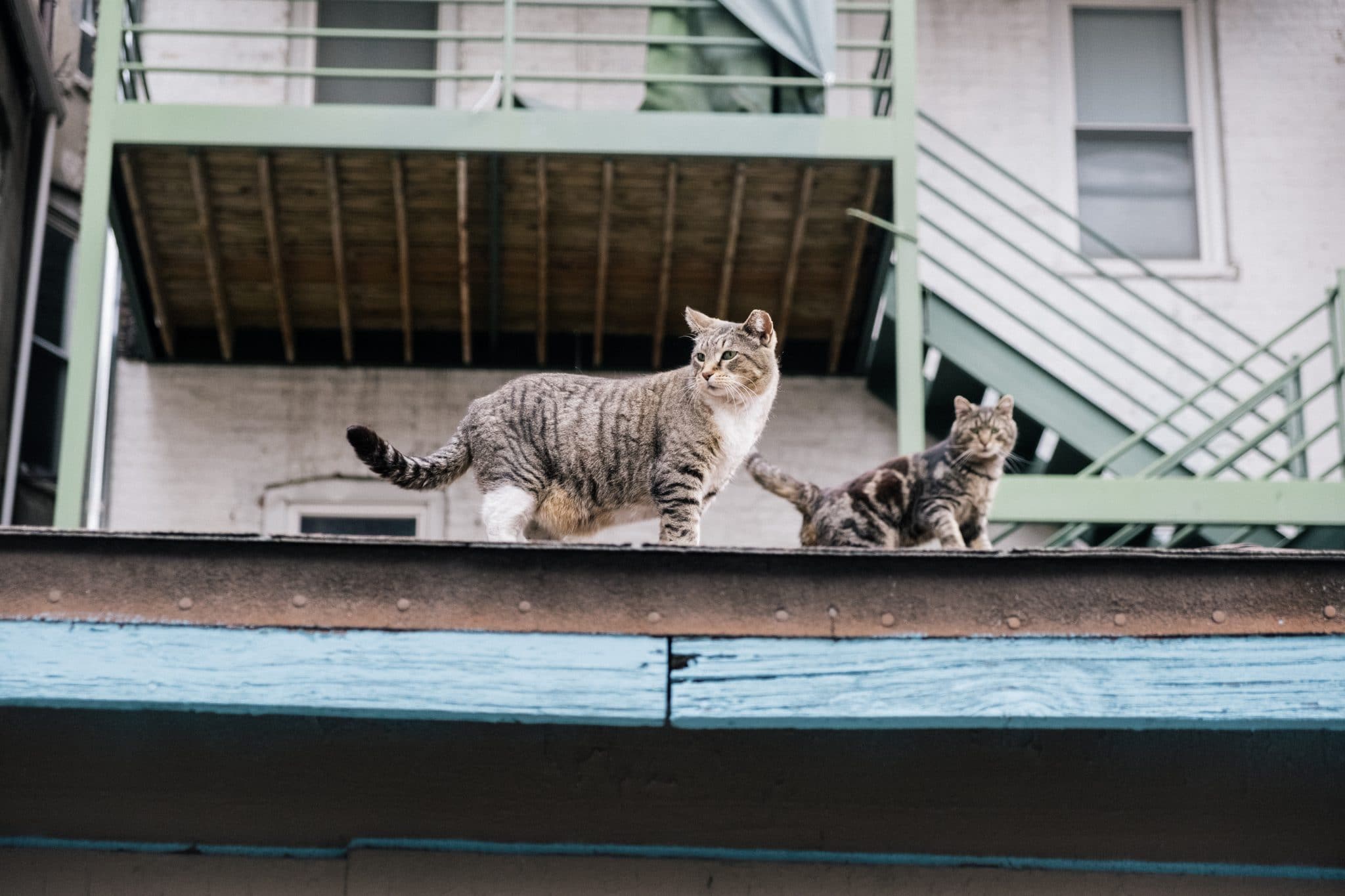 TNR-ing also prevents the spread of disease and hormonal fighting. In addition to panleuk (feline distemper) and feline leukemia, street cats must contend with a host of dangers. “Wounds. I’ve seen a lot of bad wounds this year,” says Ganza. “I released a cat with a partial tail amputation. Battle wounds from mating season, raccoon fights, hit by a car. It’s a hard-knock life out there.”

The notoriety of Pilsen’s street cat population has gained popularity on the internet, with Shouldis’ “Cats of Pilsen” and another Instagram photographer with thousands of followers, “Cat Man of Oakland.” “Cat Man of Oakland” regularly visits Chicago to photograph “‘hood cats.” He toured a Pilsen house overrun by strays recently, saying, “This yard is magical.”

Street cats have become a South Side thing. They differentiate neighborhoods like Pilsen, Kenwood, South Shore, Englewood and Garfield Park from their North Side counterparts. Without the same access to money and resources, South Siders step up and communally work to solve the problem themselves. The cats, once thought of as vermin or a nuisance, are now a beloved symbol of the South Side’s grit, beauty and adaptability.

In Pilsen, many apartment complexes and businesses have taken ownership of the cat population by feeding strays and calling community TNR volunteers like Ganza and Shouldis when they notice new kittens cropping up. Anyone who finds a stray in need can ask for help from Facebook groups like Chicago Community Cats. On Instagram, someone from Castle Blackpaw and Cats of Pilsen is always around with expertise, a trap to loan out, money for PAWS vetting, and addresses for foster homes and adoption. Neighbors who have been feeding the cats for decades can now be registered as official caretakers and receive benefits for the work they’re doing to help keep the cat population under control—and street cats like Kevin are healthier and happier for it. 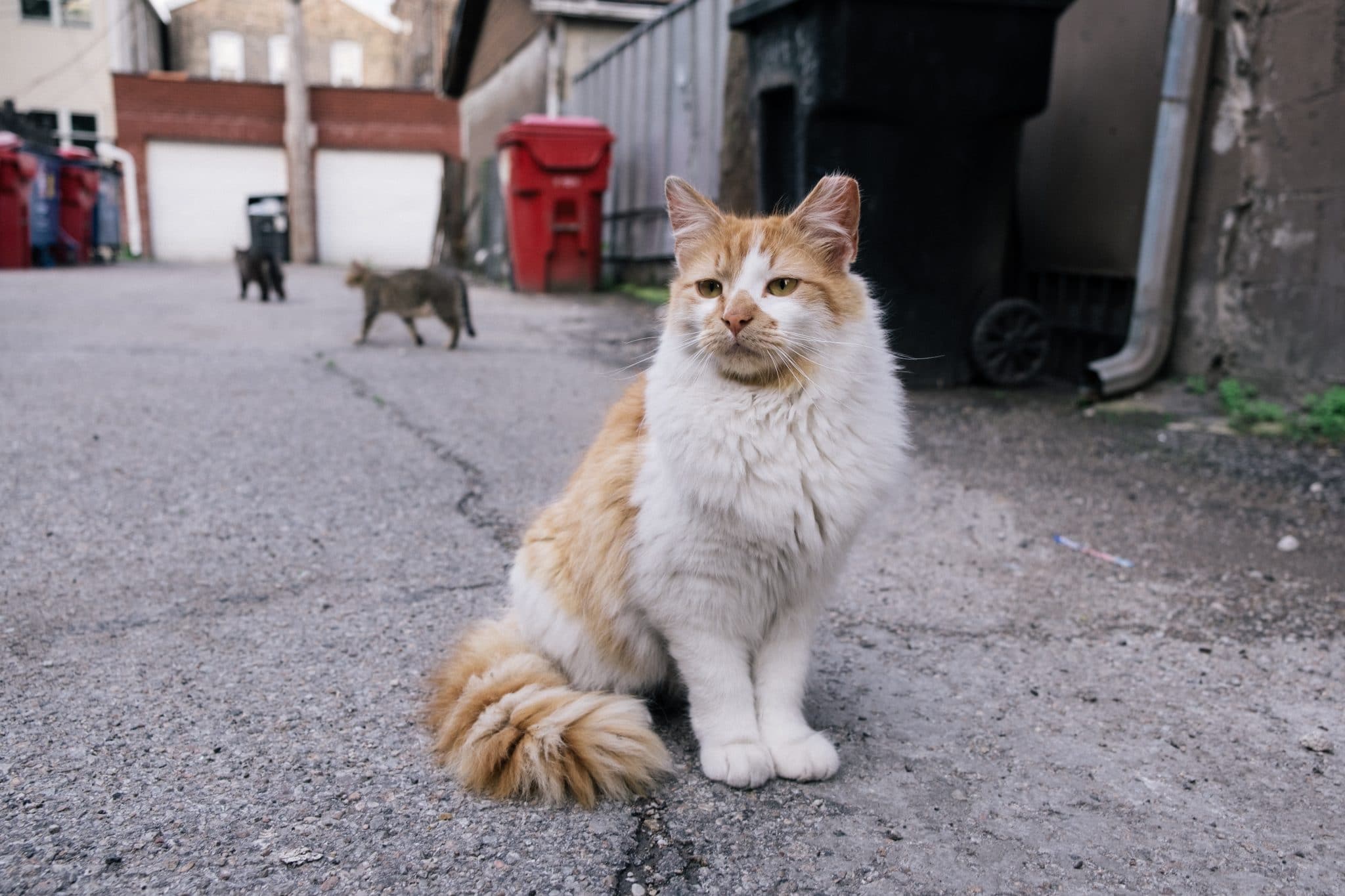 “It’s a great community,” says Shouldis, who acknowledges that organizations and volunteers are stepping up to fill a need that isn’t being managed by the city itself. “I talk to so many people—any neighbor I can—and I would say nine out of ten haven’t heard of TNR before. There’s still a lot of opportunity to get the neighborhood, the city, the nation more education on what TNR is and how it can help. It’s a good thing for feral cats to help control the population and make sure they have quality of life.”

Shouldis still hits the streets with her camera. She’s on the prowl for new centerfolds for the 2020 “Cats Of Pilsen” calendar, the proceeds of which will, once again, go to animal shelters and TNR community outreach groups.

“We’re not pretentious or snooty or anything,” says Ganza. “We’re nerds. Cat nerds. We’re just taking care of our little outside friends.”