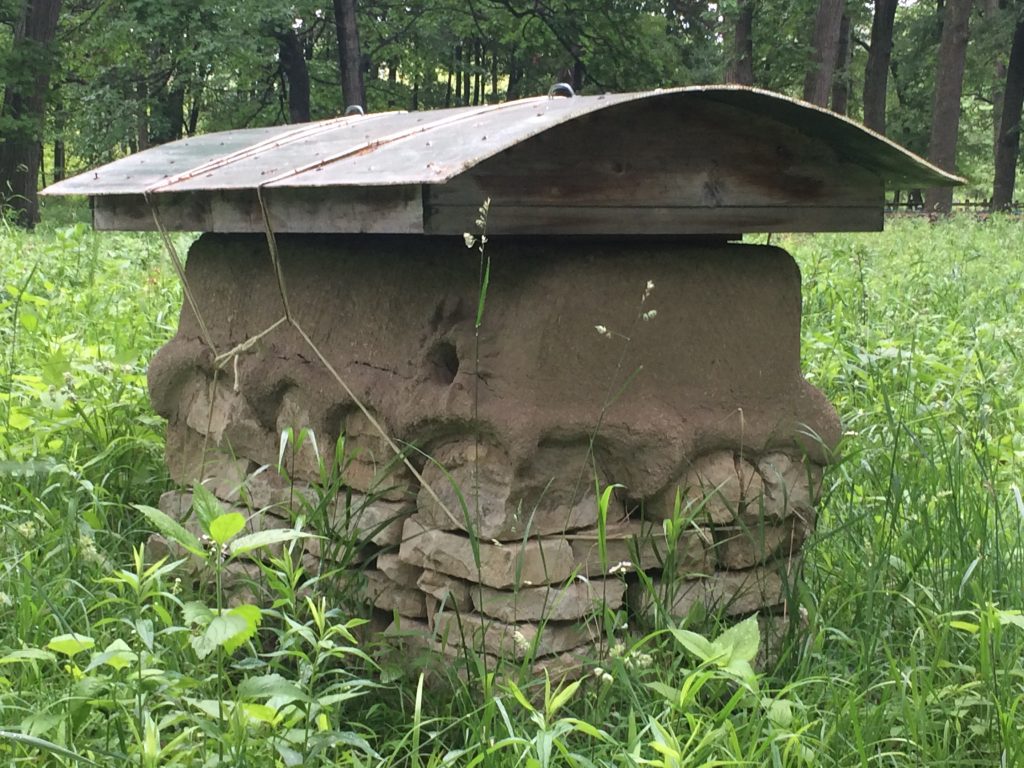 About 10 miles northwest of downtown Chicago the way the crow flies, or here it’s the honeybee, a wood-chip trail leads from the North Park Village Nature Center to the best example of what is known as natural building that we have in the city. Just off the trail in the thick of straggly vegetation stands a Kenyan-style Top Bar Beehive, built of a dry stack limestone foundation, a cob structure, and top bars made of pine. “[A] mutually beneficial condo with a sweet rental plan,” an informational sign erected nearby waggishly puts it.

Peter Poli, of Wilmot, Wisconsin, orchestrated the beehive build back in 2014 through the Chicago Natural Building Meetup Group. Poli, who runs his own plumbing business, is deeply concerned about our planet and loves doing “weird, challenging shit.” He got the idea after watching the 2010 film “Queen of the Sun,” a documentary by former Chicagoan Taggart Siegel, about the disappearance of honeybees. “Out of this came building a beehive out of mud. In a group setting. Where people could access it,” he tells me.

He pursued the North Park Village Nature Center as the beehive’s home for two reasons: it’s publicly owned space, falling on nearly sixty acres of Chicago Park District land and it’s also accessible by public transportation. Angelic Organics, a community-supported agriculture farm, in Caledonia, Illinois, north of Rockford, expressed interest and was a kindred spirit, but wasn’t selected because of its remote location. Poli’s aim was to expose the public to a “nonthreatening structure” that uses natural building techniques. (The 53 or 84 buses will get you there.)

In the essay “The Case For Natural Building,” advocate and builder Michael G. Smith defines the practice of natural building as “any building system that places the highest value on social and environmental sustainability.” Natural building prizes human labor and creativity, not capital and high technology. You build with what’s nearby. And once the structure is no longer viable, it can be ground down and absorbed naturally into the earth and environment. Typical natural building techniques include cob, strawbale, adobe and stone masonry. So those five- and six-hundred-feet LEED-certified office towers in the Loop? Not exactly.

As I was researching this story, I learned that more than ten years ago a nightclub, The Butterfly Social Club, opened on Grand Avenue near the intersection of Halsted and /Milwaukee. Nightclubs go up all the time in Chicago, but what made the Butterfly Social Club different is it had walls made of sand, clay and straw: that is, cob. It opened on Earth Day and espoused sustainability. It has since closed. The address given in its Internet afterlife doesn’t seem commercially occupied, but bookended by the bars Clover and Rebel & Rye. It’s unlikely the cob walls persist, although if they do that shouldn’t be an issue for current and future occupants. Apparently there is a cob house that is more than 10,000 years old.

In the city of Chicago, those launching their own natural building projects face a host of obstacles, from prohibitive building code restrictions to the health of our industrial land. That is why it’s helpful to set aside your Burnham for a moment and think little. Chris McClellan, a natural building advocate in Ohio better known in the community as “Uncle Mud,” writes me that, “Anywhere with strong regulations will feel less empowering to [the] average Joe to do for oneself when building. The way I have found to start to feel less helpless is to take on small projects, most of which will not require permits. Projects like a cob bench or pizza oven, or an earthen plaster on the wall or a backyard gazebo. These kinds of projects also tend to build a sense of community and awareness of how much you can do before it gets complicated.”

Even though any sort of initiative on Park District land by definition is complicated, Poli had a contact there and anyway this wasn’t his first build. He has been involved with natural building since the mid-2000s, after discovering “The Hand-Sculpted House: A Practical and Philosophical Guide to Building a Cob Cottage.” It’s the natural building community’s gateway text—it’s “Breakfast of Champions” or “On the Road.”

Poli, like most I spoke to for this story, has traveled to rural western Oregon to gain experience with natural building projects through the Cob Cottage Company, the organization founded by the coauthors of “The Hand-Sculpted House.” The Cob Cottage Company, in Coquille, Oregon, offers guidance, instruction and workshops, with the opportunity to have a hand in actual builds that the apprentice, or even more seasoned builder can apply to their own projects. While there, Poli worked on building a small home.

After securing the necessary city permits for the Nature Center build, in preparation Poli hauled in buckets of clay and sand from construction sites out in Antioch, Illinois, located just across the border from his home in Wilmot. He bought the straw in a feed store in Trevor, Wisconsin. His parents donated limestone from their construction company. And the pine for the top bars came from a lumberyard in Antioch.

The day of the build twenty or so volunteers turned out. Heather Haskins, who leads the Chicago Natural Building Meetup Group, one of the few resources for natural builders in the area and thus refers to herself as “The Walmart greeter of natural building in Chicago,” tells me labor in the city is never a problem. “People will come. I think people are really hungry for these types of projects.”

The volunteers pitched in with the limestone stacking and took part in something known as cob dancing. This is a communal stamping of the clay, sand and straw elements to pack the cob mixture together for the right consistency and durability, with the straw acting as rebar would in concrete. The cob structure fit onto the limestone foundation, with the top bars placed overhead. By the end of the build the group had assembled a beehive roughly five feet in height that is still in use today.

Poli believes at the time of the build there were no other examples of this type of cob beehive in the Midwest, possibly the United States. “At least in modern times,” he clarifies. And the Kenyan style in which it’s built is meant to simulate what the bees would like to find in nature, providing a cavity as in the hollow of a tree. “After that,” he says, “all the architecture is up to them.”