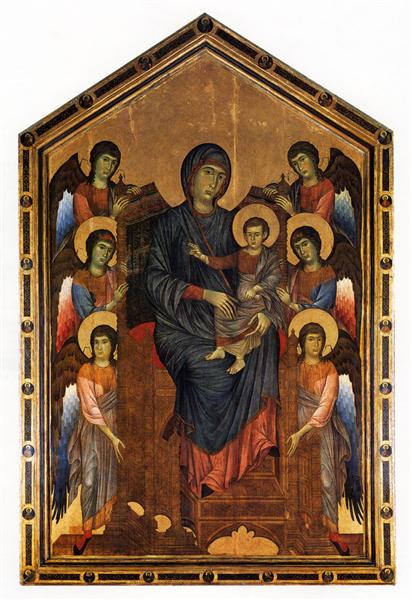 “The Madonna and Child in Majesty Surrounded by Angels,” by Cimabue. c. 1270

ARIES (March 21-April 19): “Beware of what disturbs the heart,” said Ibn Mas’ud, a companion of the prophet Mohammed. “If something unsettles your heart, then abandon it.” My wise Aries friend Artemisia has a different perspective. She advises, “Pay close attention to what disturbs the heart. Whatever has the power to unsettle your heart will show you a key lesson you must learn, a crucial task you’d be smart to undertake.” Here’s my synthesis of Ibn Mas’ud and Artemisia: Do your very best to fix the problem revealed by your unsettled heart. Learn all you can in the process. Then, even if the fix isn’t totally perfect, move on. Graduate from the problem for good.

TAURUS (April 20-May 20): Taurus social critic Bertrand Russell won the Nobel Prize in Literature in 1950. He’s regarded as the founder of analytic philosophy and one of the twentieth century’s premier intellectuals. But he went through a rough patch in 1940. He was adjudged “morally unfit” to accept his appointment as a professor at the City College of New York. The lawsuit that banned him from the job described him as being “libidinous, lustful, aphrodisiac and irreverent.” Why? Simply because of his liberated opinions about sexuality, which he had conscientiously articulated in his book “Marriage and Morals.” In our modern era, we’re more likely to welcome libidinous, lustful, aphrodisiac and irreverent ideas if they’re expressed respectfully, as Russell did. With that as a subtext, I invite you to update and deepen your relationship with your own sexuality in the coming weeks.

GEMINI (May 21-June 20): In her poem “What the Light Teaches,” Anne Michaels describes herself arriving at a lover’s house soaked with rain, “dripping with new memory.” She’s ready for “one past to grow out of another.” In other words, she’s eager to leave behind the story that she and her lover have lived together up until now—and begin a new story. A similar blessing will be available for you in the coming weeks, Gemini: a chance for you and an intimate partner or close ally to launch a new chapter of your history together.

CANCER (June 21-July 22): Some scientists deride astrology despite being ignorant about it. For example, they complain, “The miniscule gravitational forces beaming from the planets can’t possibly have any effect on our personal lives.” But the truth is that most astrologers don’t believe the planets exert influence on us with gravity or any other invisible force. Instead, we analyze planetary movements as evidence of a hidden order in the universe. It’s comparable to the way weather forecasters use a barometer to read atmospheric pressure but know that barometers don’t cause changes in atmospheric pressure. I hope this inspires you, Cancerian, as you develop constructive critiques of situations in your own sphere. Don’t rely on naive assumption and unwarranted biases. Make sure you have the correct facts before you proceed. If you do, you could generate remarkable transformations in the coming weeks.

LEO (July 23-Aug. 22): As you glide into the Season of Love, I’d love you to soak up wise counsel from the author bell hooks. (She doesn’t capitalize her name.) “Many people want love to function like a drug, giving them an immediate and sustained high,” she cautions. “They want to do nothing, just passively receive the good feeling.” I trust you won’t do that, Leo. Here’s more from hooks: “Dreaming that love will save us, solve all our problems or provide a steady state of bliss or security only keeps us stuck in wishful fantasy, undermining the real power of the love—which is to transform us.” Are you ready to be transformed by love, Leo?

VIRGO (Aug. 23-Sept. 22): Burrow down as deep as you dare, Virgo. Give yourself pep talks as you descend toward the gritty core of every matter. Feel your way into the underground, where the roots meet the foundations. It’s time for you to explore the mysteries that are usually beneath your conscious awareness. You have a mandate to reacquaint yourself with where you came from and how you got to where you are now.

LIBRA (Sept. 23-Oct. 22): It’s natural and healthy to feel both the longing to connect and the longing to be independent. Each of those urges deserves an honored place in your heart. But you may sometimes experience them as being contradictory; their opposing pulls may rouse tension. I bring this to your attention because I suspect that the coming weeks will be a test of your ability to not just abide in this tension, but to learn from and thrive on it. For inspiration, read these words by Jeanette Winterson. “What should I do about the wild heart that wants to be free and the tame heart that wants to come home? I want to be held. I don’t want you to come too close. I want you to scoop me up and bring me home at night. I don’t want to tell you where I am. I want to be with you.”

SCORPIO (Oct. 23-Nov. 21): The Louvre Museum in Paris displays 38,000 objects throughout its eighteen acres of floor space. Among its most treasured thirteenth-century artworks is “The Madonna and Child in Majesty Surrounded by Angels,” a huge painting by Italian painter Cimabue. When a museum representative first acquired it in the nineteenth century, its price was five francs, or less than a dollar. I urge you to be on the lookout for bargains like that in the coming weeks. Something that could be valuable in the future may be undervalued now.

SAGITTARIUS (Nov. 22-Dec. 21): Sagittarian performance artist Marina Abramovic observes that Muhammad, Buddha, Jesus and Moses “all went to the desert as nobodies and came back as somebodies.” She herself spent a year in Australia’s Great Sandy Desert near Lake Disappointment, leading her to exclaim that the desert is “the most incredible place, because there is nothing there except yourself, and yourself is a big deal.” From what I can tell, Sagittarius, you’re just returning from your own metaphorical version of the desert, which is very good news. Welcome back! I can’t wait to see what marvels you spawn.

CAPRICORN (Dec. 22-Jan. 19): Upcoming events may bedevil your mind. They may mess with your certainties and agitate your self-doubts. But if you want my view about those possibilities, they’re cause for celebration. According to my analysis of the astrological indicators, you will benefit from having your mind bedeviled and your certainties messed with and your self-doubts agitated. You may ultimately even thrive and exult and glow like a miniature sun. Why? Because you need life to gently but firmly kick your ass in just the right way so you’ll become alert to opportunities you have been ignoring or blind to.

AQUARIUS (Jan. 20-Feb. 18): Every writer I’ve ever known says that a key practice to becoming a good writer is to read a lot of books. So what are we to make of the fact that one of the twentieth century’s most celebrated novelists didn’t hew to that principle? In 1936, three years before the publication of his last book, Aquarian-born James Joyce confessed that he had “not read a novel in any language for many years.” Here’s my take on the subject: More than any other sign of the zodiac, you Aquarians have the potential to succeed despite not playing by conventional rules. And I suspect your power to do that is even greater than usual these days.

PISCES (Feb. 19-March 20): “If you are lucky enough to find a way of life you love, you have to find the courage to live it,” wrote Piscean novelist John Irving. In the coming weeks, Pisces, you will have the power to get clearer than ever before about knowing the way of life you love. As a bonus, I predict you will also have an expanded access to the courage necessary to actually live that way of life. Take full advantage!