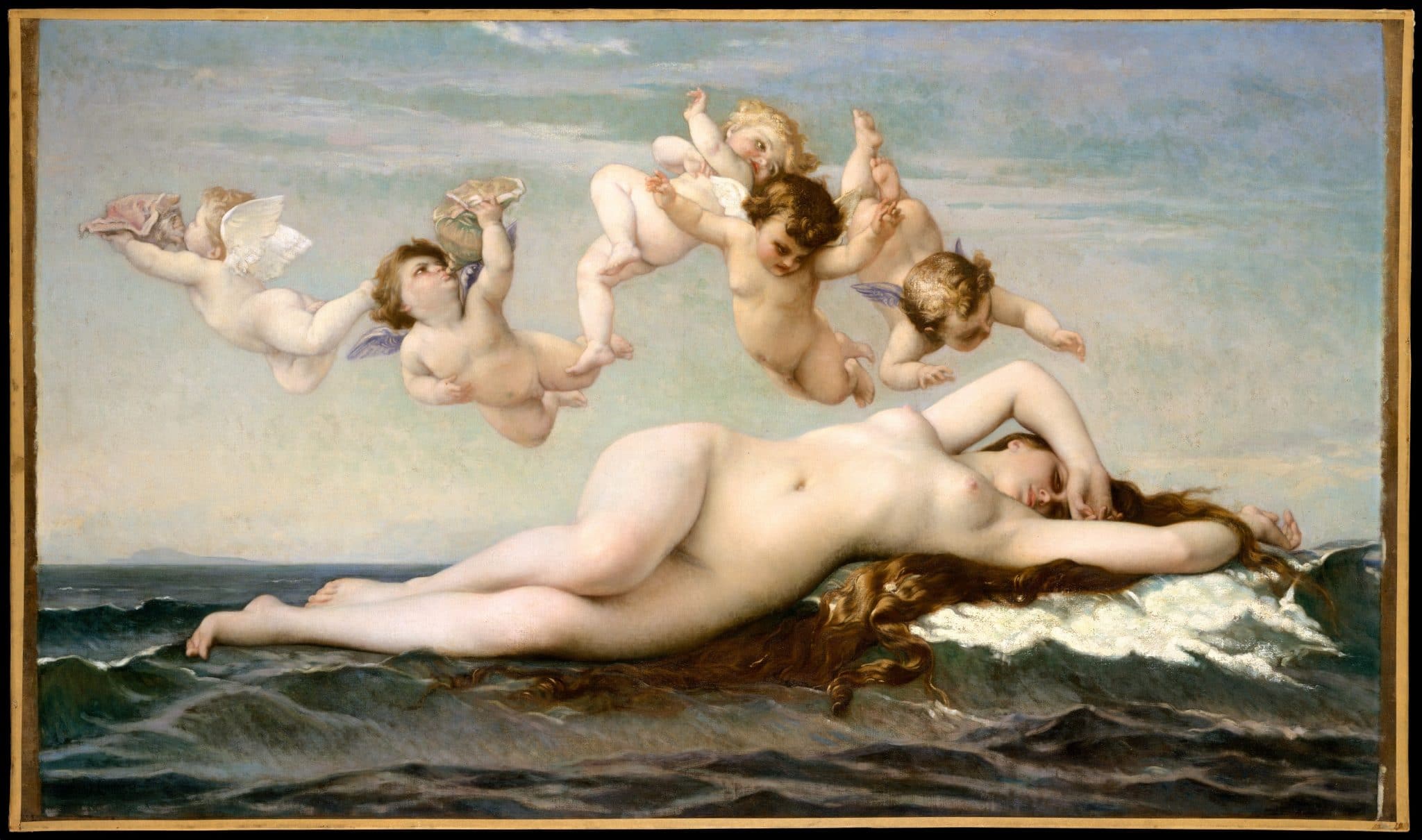 “The Birth of Venus,” 1875, Alexandre Cabanel/courtesy The Met collection

ARIES (March 21-April 19): You now have the power to make connections that have not previously been possible. You can tap into an enhanced capacity to forge new alliances and strengthen your support system. I urge you to be on the lookout for a dynamic group effort you could join or a higher purpose you might align yourself with. If you’re sufficiently alert, you may even find an opportunity to weave your fortunes together with a dynamic group effort that’s in service to a higher purpose.

TAURUS (April 20-May 20): “Victory won’t come to me unless I go to it,” wrote the poet Marianne Moore. In other words, you must track down each victory you’re interested in. You must study its unique nature. And then you must adjust yourself to its specifications. You can’t remain just the way you are, but must transform yourself so as to be in alignment with the responsibilities it demands of you. Can you pass these tests, Taurus? I believe you can. It’s time to prove it.

GEMINI (May 21-June 20): While at the peak of his powers as an author, Gemini-born Nobel Prize-winner Jean Paul Sartre consumed an array of mood-shifters every day. He quaffed at least a quart of alcohol, smoked two packs of cigarettes, and drank copious amounts of coffee and tea. His intake of pills included 200 milligrams of amphetamines, fifteen grams of aspirin, and a handful of barbiturates. I propose that we make Sartre your anti-role model during the next four weeks, dear Gemini. According to my analysis of your astrological indicators, your ability to discover, attract and benefit from wonders and marvels will thrive to the degree that you forswear drugs and alcohol and artificial enhancements. And I’m pleased to inform you that there could be a flood of wonders and marvels.

CANCER (June 21-July 22): I don’t think I’m boring. How could I be? I have an abundant curiosity and I love to learn new things. I’ve worked at many different jobs, have read widely, and enjoy interacting with a broad range of humans. Yet now and then I’ve had temporary relationships with people who regarded me as uninteresting. They didn’t see much of value in me. I tend to believe it was mostly their fault—they couldn’t see me for who I really am—but it may have also been the case that I lived down to their expectations. Their inclination to see me as unimportant influenced me to be dull. I bring this up, my fellow Cancerian, because now is an excellent time to remove yourself from situations where you have trouble being and feeling your true self.

LEO (July 23-Aug. 22): Soprano Helen Traubel and tenor Lauritz Melchior performed together in many productions of Wagnerian operas, often at the Metropolitan in New York City. Friends and colleagues but not lovers, they had a playful relationship with each other. A favorite pastime was figuring out tricks they could try that would cause the other to break into inappropriate laughter while performing. According to my quirky reading of the astrological omens, Leo, the coming weeks will be a propitious time for you to engage in similar hijinx with your allies. You have a poetic license and a spiritual mandate to enjoy amusing collaborative experiments, playful intimate escapades and adventures in buoyant togetherness.

VIRGO (Aug. 23-Sept. 22): Eighteenth-century author Samuel Johnson singlehandedly compiled the influential “A Dictionary of the English Language,” which remained the definitive British dictionary for 170 years. We shouldn’t be surprised that it was a Virgo who accomplished such an intricate and exhaustive feat. As a high-minded Virgo, Johnson also had a talent for exposing hypocrisy. In commenting on the Americans’ War of Independence against his country, he noted that some of the “loudest yelps for liberty” came from slave-owners. I propose that we make him one of your role models in 2020. May he inspire you to produce rigorous work that’s useful to many. May he also empower you to be a candid purveyor of freedom.

LIBRA (Sept. 23-Oct. 22): Is there a project or situation you’d love to create but have lacked the confidence to try? Now is a time when you can finally summon the necessary courage. Is there a long-running dilemma that has always seemed too confusing and overwhelming to even understand, let alone solve? Now is a favorable time to ask your higher self for the clear vision that will instigate an unforeseen healing. Is there a labor of love that seems to have stalled or a dream that got sidetracked? Now is a time when you could revive its luminosity and get it back in a sweet groove.

SCORPIO (Oct. 23-Nov. 21): Was there a more influential twentieth-century artist than Scorpio-born Pablo Picasso? He was a revolutionary innovator who got rich from his creations. Once, while visiting a gallery showing of art made by children, he said, “When I was their age I could draw like Raphael [the great Renaissance artist]. But it took me a lifetime to learn to draw like they do.” In accordance with your current astrological omens, Scorpio, I suggest you seek inspiration from Picasso’s aspiration. Set an intention to develop expertise in seeing your world and your work through a child’s eyes.

SAGITTARIUS (Nov. 22-Dec. 21): I know a Sagittarius man who has seen the film “Avengers: Endgame” seventeen times. Another Sagittarian acquaintance estimates she has listened all the way through to Billie Eilish’s album “When We All Fall Asleep, Where Do We Go?” 135 times. And then there’s my scholarly Sagittarian friend who has read the ancient Greek epic poem the “Iliad” thirty-seven times. I have no problem with this behavior. I admire your tribe’s ability to keep finding new inspiration in sources you already know well. But in my astrological opinion, you shouldn’t do much of this kind of thing in the coming weeks. It’s high time for you to experiment with experiences you know little about. Be fresh, innocent and curious.

CAPRICORN (Dec. 22-Jan. 19): Athens was one of the great cities of the ancient world. Its vigorous art, theater, philosophy, architecture and experiments in democracy are today regarded as foundational to Western culture. And yet at its height, Athens’ population was a mere 275,000—equal to modern Fort Wayne, Indiana or Windsor, Ontario. How could such a relatively small source breed such intensity and potency? That’s a long story. In any case, I foresee you having the potential to be like Athens yourself in the coming weeks and months, Capricorn: a highly concentrated fount of value. For best results, focus on doing what you do best.

AQUARIUS (Jan. 20-Feb. 18): According to my analysis, the year 2020 will be a time when you can have dramatic success as you re-evaluate and re-vision and revamp your understandings of your life purpose. Why were you born? What’s the nature of your unique genius? What are the best gifts you have to offer the world? Of the many wonderful feats you could accomplish, which are the most important? The next few weeks will be a potent time to get this fun and energizing investigation fully underway.

PISCES (Feb. 19-March 20): Physicist Niels Bohr won a Nobel Prize for his insights about quantum mechanics. But he was humble about the complexity of the subject. “If you think you understand it, that only shows you don’t know the first thing about it,” he mused. I’m tempted to make a similar statement about the mysteries and riddles that are making your life so interesting. If you think you understand those mysteries and riddles, you probably don’t. But if you’re willing to acknowledge how perplexing they are, and you can accept the fact that your comprehension of them is partial and fuzzy, then you might enjoy a glimmer of the truth that’s worth building on.

Homework: You can fling imaginary lightning bolts from your fingers any time you want. Prove it! FreeWillAstrology.com