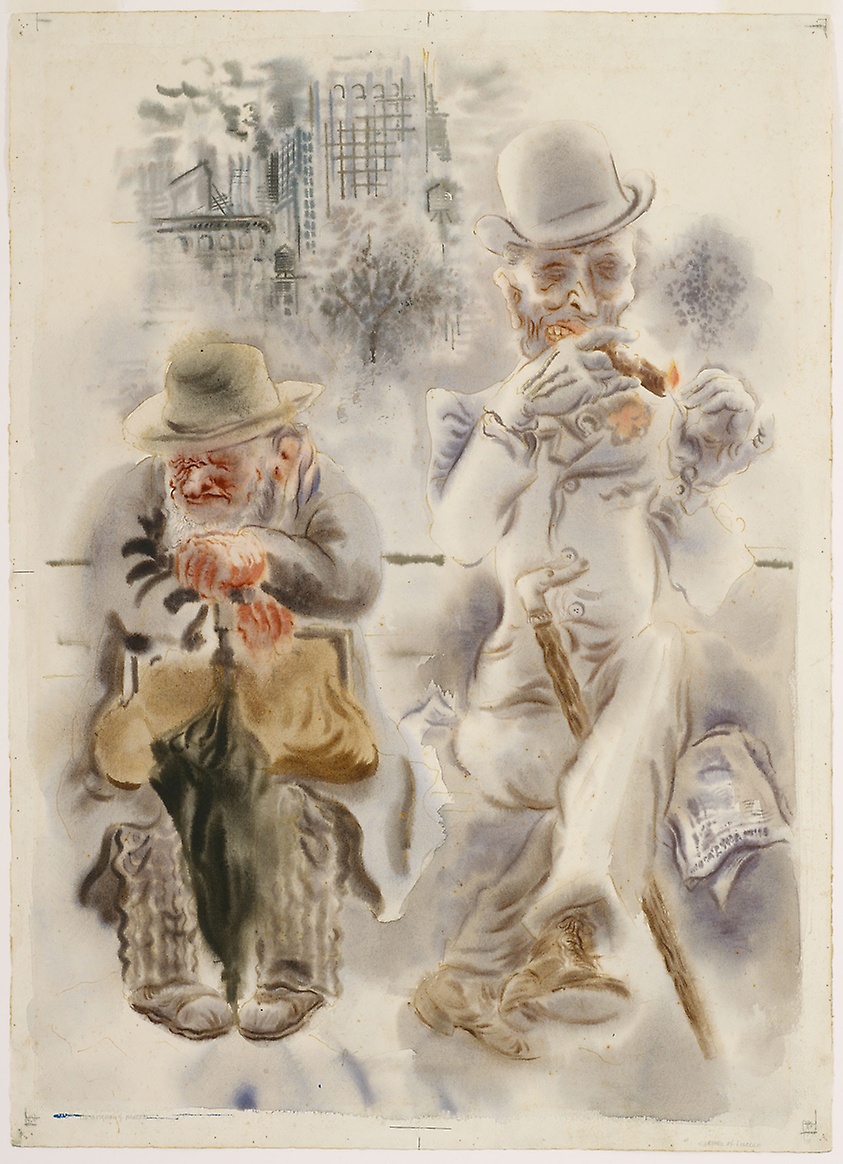 “The Avenue of Success,” by George Grosz,1935, Art Institute of Chicago

ARIES (March 21-April 19): Do you feel ready to change your mind about an idea or belief or theory that has been losing its usefulness? Would you consider changing your relationship with a once-powerful influence that is becoming less crucial to your lifelong goals? Is it possible you have outgrown one of your heroes or teachers? Do you wonder if maybe it’s time for you to put less faith in a certain sacred cow or overvalued idol? According to my analysis of your astrological omens, you’ll benefit from meditating on these questions during the coming weeks.

TAURUS (April 20-May 20): When she was alive more than 2,500 years ago, the Greek poet Sappho was so famous for her lyrical creations that people referred to her as “The Poetess” and the “Tenth Muse.” (In Greek mythology, there were nine muses, all goddesses.) She was a prolific writer who produced over 10,000 lines of verse, and even today she remains one of the world’s most celebrated poets. I propose that we make her your inspirational role model for the coming months. In my view, you’re poised to generate a wealth of enduring beauty in your own chosen sphere. Proposed experiment: Regard your daily life as an art project.

GEMINI (May 21-June 20): Have you ever dropped out of the daily grind for a few hours or even a few days so as to compose a master plan for your life? The coming weeks will be an excellent time to give yourself that necessary luxury. According to my analysis, you’re entering a phase when you’ll generate good fortune for yourself if you think deep thoughts about how to create your future. What would you like the story of your life to be on March 1, 2025? How about March 1, 2030? And March 1, 2035? I encourage you to consult your soul’s code and formulate an inspired, invigorating blueprint for the coming years. Write it down!

CANCER (June 21-July 22): Cancerian novelist William Makepeace Thackeray (1811–1863) is famous for “Vanity Fair,” a satirical panorama of nineteenth-century British society. The phrase “Vanity Fair” had been previously used, though with different meanings, in the Bible’s book of Ecclesiastes, as well as in works by John Bunyan and St. Augustine. Thackeray was lying in bed near sleep one night when the idea flew into his head to use it for his own story. He was so thrilled, he leaped up and ran around his room chanting “Vanity Fair! Vanity Fair!” I’m foreseeing at least one epiphany like this for you in the coming weeks, Cancerian. What area of your life needs a burst of delicious inspiration?

LEO (July 23-Aug. 22): Who loves you best, Leo? Which of your allies and loved ones come closest to seeing you and appreciating you for who you really are? Of all the people in your life, which have done most to help you become the soulful star you want to be? Are there gem-like characters on the peripheries of your world that you would like to draw nearer? Are there energy drains that you’ve allowed to play too prominent a role? I hope you’ll meditate on questions like these in the coming weeks. You’re in a phase when you can access a wealth of useful insights and revelations about how to skillfully manage your relationships. It’s also a good time to reward and nurture those allies who have given you so much.

VIRGO (Aug. 23-Sept. 22): Doom and gloom dominate the forecasts made by many prophets. They experience perverse glee in predicting, for example, that all the rain forests and rivers will be owned by greedy corporations by 2050, or that extraterrestrial invaders who resemble crocodiles will take control of the U.S. government “for the good of the American people,” or that climate change will eventually render chocolate and bananas obsolete. That’s not how I operate. I deplore the idea that it’s only the nasty prognostications that are interesting. In that spirit, I make the following forecasts: The number of homeless Virgos will decrease dramatically in the near future, as will the number of dreamhome-less Virgos. In fact, I expect you folks will experience extra amounts of domestic bliss in the coming months. You may feel more at home in the world than ever before.

LIBRA (Sept. 23-Oct. 22): I don’t require everyone I learn from to be an impeccable saint. If I vowed to draw inspiration only from those people who flawlessly embody every one of my ethical principles, there’d be no one to be inspired by. Even one of my greatest heroes, Martin Luther King Jr., cheated on his wife and plagiarized parts of his doctoral dissertation. Where do you stand on this issue, Libra? I bet you will soon be tested. How much imperfection is acceptable to you?

SCORPIO (Oct. 23-Nov. 21): Scorpio comedian John Cleese co-founded the troupe Monty Python more than fifty years ago, and he has been generating imaginative humor ever since. I suggest we call on his counsel as you enter the most creative phase of your astrological cycle. “This is the extraordinary thing about creativity,” he says. “If you just keep your mind resting against the subject in a friendly but persistent way, sooner or later you will get a reward from your unconscious.” Here’s another one of Cleese’s insights that will serve you well: “The most creative people have learned to tolerate the slight discomfort of indecision for much longer, and so, just because they put in more pondering time, their solutions are more creative.”

SAGITTARIUS (Nov. 22-Dec. 21): Sagittarian philosopher Baruch Spinoza (1632–1677) developed a vigorous and expansive vision. That’s why he became a leading intellectual influence in the era known as the Enlightenment. But because of his inventive, sometimes controversial ideas, he was shunned by his fellow Jews and had his books listed on the Catholic Church’s Index of Forbidden Books. Understandably, he sometimes felt isolated. To compensate, he spent lots of time alone taking wide-ranging journeys in his imagination. Even if you have all the friends and social stimulation you need, I hope you will follow his lead in the coming weeks—by taking wide-ranging journeys in your imagination. It’s time to roam and ramble in inner realms.

CAPRICORN (Dec. 22-Jan. 19): “Absolute reason expired at eleven o’clock last night,” one character tells another in Henrik Ibsen’s play “Peer Gynt.” I’m happy to report that a different development is on the verge of occurring for you, Capricorn. In recent days, there may have been less than an ideal amount of reason and logic circulating in your world. But that situation will soon change. The imminent outbreak of good sense, rigorous sanity and practical wisdom will be quite tonic. Take advantage of this upcoming grace period. Initiate bold actions that are well-grounded in objective rather than subjective truth.

AQUARIUS (Jan. 20-Feb. 18): Renowned Aquarian composer Franz Schubert (1797–1828) created more than 700 compositions, some of which are still played by modern musicians. Many of his works were written on and for the piano—and yet he was so poor that he never owned a piano. If there has been a similar situation in your life, Aquarius—a lack of some crucial tool or support due to financial issues—I see the coming weeks as being an excellent time to set in motion the plans that will enable you to overcome and cure that problem.

PISCES (Feb. 19-March 20): In 1908, British playwright W. Somerset Maugham reached the height of success. Four of his plays were being performed concurrently in four different London theaters. If you were ever in your life going to achieve anything near this level of overflowing popularity or attention, I suspect it would be this year. And if that’s a development you would enjoy and thrive on, I think the coming weeks will be an excellent time to set your intention and take audacious measures.

Homework: I declare you champion, unvanquishable hero and title-holder of triumphant glory. Do you accept? FreeWillAstrology.com