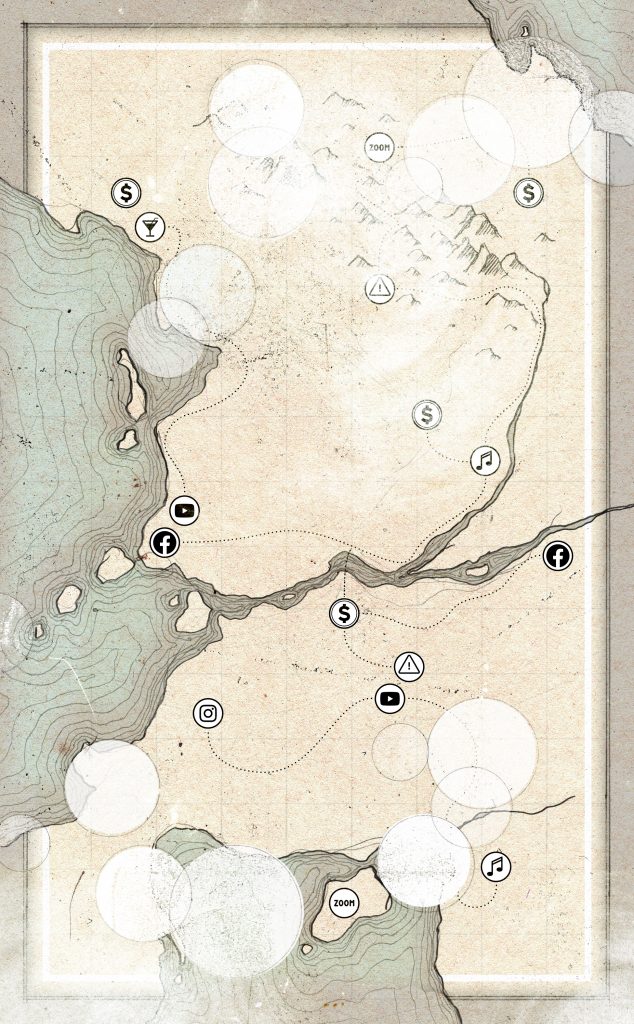 I open my eyes and find myself in the middle of a remote farm, lying down in a stable. I get up and walk outside to take in the views of the open plains, the long-running rows of corn and the small cottages nearby. I look for cues on where I should go or what to do next. I walk toward the edge of a field with a tall wooden gate. It’s open, and beyond I can see the gravel road is lined with towering trees, each spaced enough to reveal a dense fog spanning for what looks like miles. Despite the ominous appearance, it fills me with curiosity. I move ahead, in awe of the sheer height of the trees, when an odd noise from the distance finds its way to my attention. I catch a glimpse of a shadow that appears to be running in my direction at full speed.

I’m running. I know someone is closing in behind me but I don’t know how to look yet. I try to go faster, and in a sudden break of silence, I look down to find a large sickle going through my body. As my eyes track along a lengthy metal chain, I see it attached to the bloodied arm of my pursuer and everything loses color and shifts to black-and-white.

It was 2004 and that defining memory was the beginning of a journey that would open a universe of experience, while systemically destroying everything that was part of my physical life. The place was World of Warcraft, the now-infamous multiplayer online role-playing game that occupies more than one-hundred-million players across the globe. After my first login abruptly ended at the wrong end of an Abomination’s grasp, I knew I needed to go back, and I did. In this new reality, I would spend the next six years building a community of friends, straddling time between the physical world and the infinite one on the other side of the screen. I forged the perfect place to escape when I needed to—one I felt couldn’t exist in reality. As I reached a troubling milestone of a year’s worth of playtime, 365 days logged into the game, the real-world toll was becoming apparent. My relationships with family strained. My work suffered. I lost friends, and eventually my marriage.

It would take years to recoup from the damage and find a healthy balance, but as stark as things might seem, there were positives. I learned how powerful online and virtual connections could be. I channeled inspiration from different games like Eve Online, Mass Effect and Final Fantasy into my work as a designer and software engineer to craft award-winning apps and websites. It showed me that large-scale collaboration is possible, where I’d guide teams of up to one-hundred players to achieve a single goal, and those skills translated to me as a mentor and leader. It taught me to be understanding of the limits of an internet connection, and be patient with the unnatural pauses of latency. When I reflect on those times, the memories of the places and achievements are as solid as any I’ve had in real life, or IRL, as we would say.

The pandemic has thrust the entire world into a virtual one. It underscores the dramatic shortcomings of available tools to maintain a human connection and a functioning society. For most people I know, the consensus is that online interaction is not enough, and that it can never compare to things the physical world has to offer— romance, concerts, workplace interactions, drinks with friends or dancing. I agree that technology cannot entirely replicate our experiences in the real world, but my years of gaming taught me that we can certainly do better.

The advent of online gaming, which took off in the early 2000s, has moved well beyond video and chat to enable immersive, engaging and expansive experiences. The same technology that powers our social networks can exceed “liking” a video, sending an Animoji or giving us virtual backgrounds. Many games allow you to use senses of sight, hearing and touch to get closer to the content. When you deconstruct the problem that gaming solved, it makes it easier to apply its core principles into other areas of our online lives. Simply put, gaming can allow us to come together in a virtual space, in solidarity, to collaborate or create meaningful interactions.

Like most of us who have used Zoom, I have struggled to connect with friends and family. I feel trapped—limited to the same screen, with all voices at the same volume, without being able to replicate our usual interactions. Each time I sit in front of a webcam to catch up with someone, I miss what games once offered me. That feeling of being able to enter a space—truly occupy it—and have the freedom to move in and out of different conversations. In World of Warcraft, I would spend hours with friends in infinite caverns. At times, I would be with as many as forty people all battling a common enemy, carefully coordinated through practice and voice chat. Other times, I would simply take a walk with a close friend along the mountains of Azeroth, where we would share our deepest secrets or just observe the breathtaking scenery.

As Chicago cancels summer events, I am saddened that we won’t have the usual festivals, concerts and bars to attend. I would long for anything to temporarily replicate these staples of life, and I can see game mechanics making it possible. Fortnite, another online multiplayer game, recently hosted a Travis Scott virtual concert. It attracted more than twenty-seven million people. Participants emerged into a new world. One where players could follow Travis as his one-hundred-foot avatar traversed different scenes. Each person becoming part of what reminded me of a psychedelic music video. And I could see myself doing that, too. Going to a virtual Lollapalooza, starting the day at the south stage, and eventually making my way to see the Strokes, joined by my partner and close friends as we dance to our favorite songs.

I am by no means advocating that we should all move online or that virtual experiences can replace what we have in real life. But in moments where we are forced to isolate at home, online gaming technology can certainly offer us what I once had—whether you’re having a drink with a friend, consulting with your doctor through telemedicine, or engaging a classroom full of students. Over the years, although far from perfect, gaming has excelled at bringing people together by making experiences more engaging. It is my hope that current social media and collaboration platforms take this as an opportunity to rethink the way we can interact online.