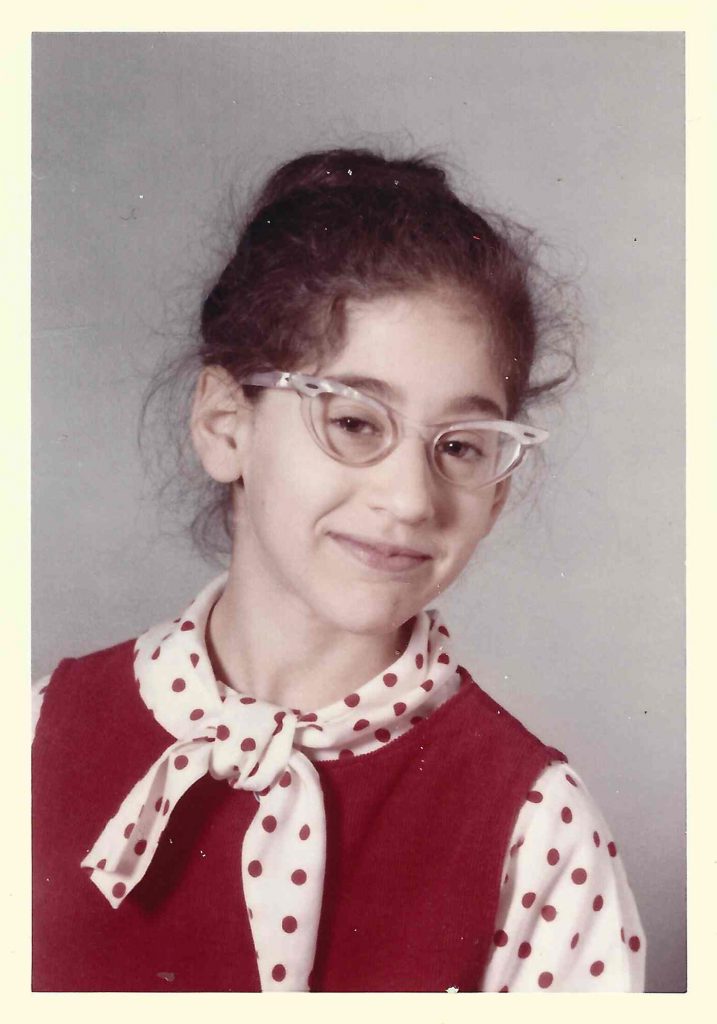 The author in third grade

For many years I didn’t understand the appeal of summer camp. The rituals and traditions were alien, unfathomable. At one camp they told us to make lanyards but never told us why or what they were. At another, which was “quietly Jewish” (a scholar’s term), they served bacon, which I knew I wasn’t supposed to eat. Toward the end of the session at that camp (in the Ozarks; I didn’t know where I was but I knew that Ozarks wasn’t a state) sponsored something called Red and Black, when the campers were divided into two teams that competed for points. Why this rivalry? And I couldn’t grasp why we were graded on how well we made our beds and swept our cabins. (I didn’t realize that there is something militaristic about even the most benign summer camps.)

And it was all outside. 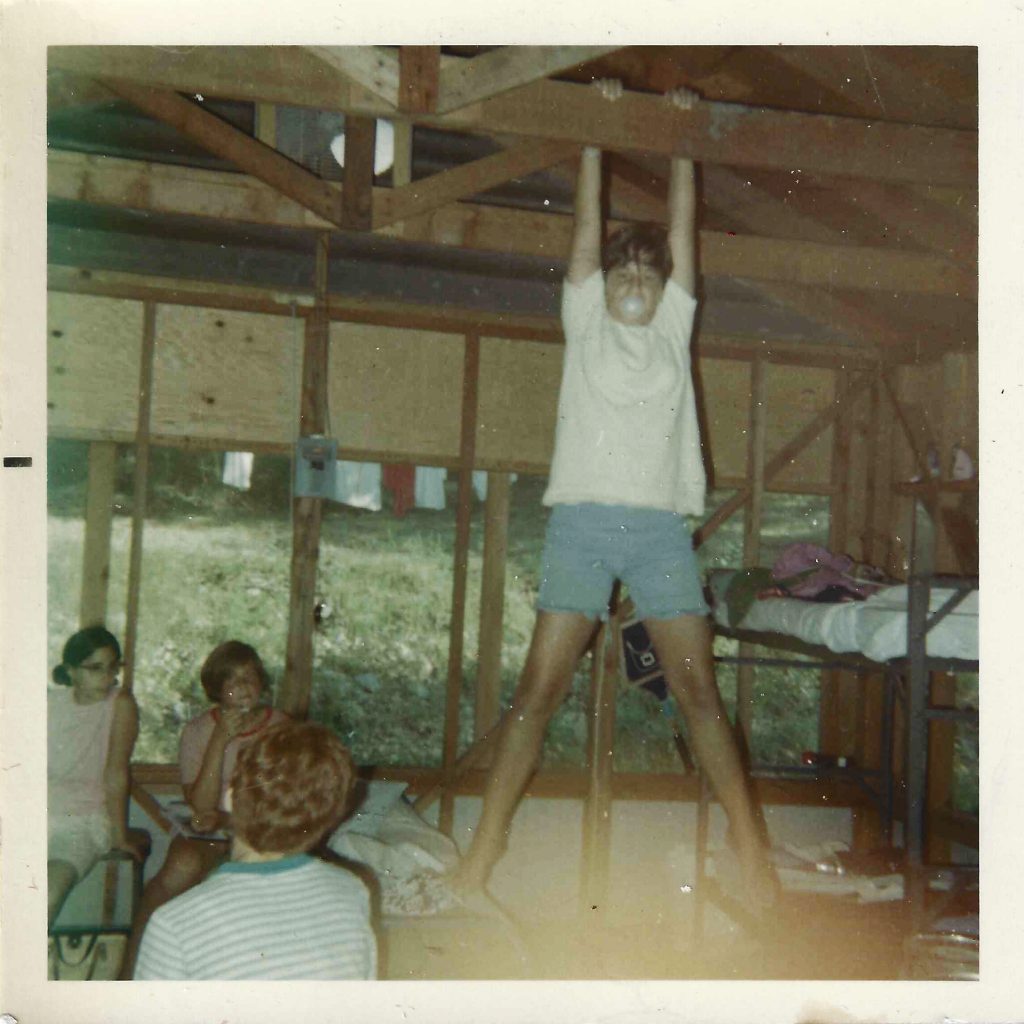 Bunkmates at the second camp in Missouri

admit I was “all exited [sic],” as I wrote in my diary the day before I left for overnight camp the first time. I was eight years old, tall for my age, bookish and shy. My sister and friends had gone to this camp. It was maybe five or six hours from our house in Houston and was a (Jewish) camp. The parenthesis meant that all the campers seemed to be Jewish but the fact wasn’t mentioned much, though we recognized the Sabbath by wearing white. The more Zionist and serious local kids (or those who had parents who were) went to Camp Young Judea. The more religious went out of state to Camp Ramah, which from secondhand descriptions sounded like living in an open-air synagogue.

The morning before I left I looked in the mirror and noticed a small lump under my jaw. I thought maybe I had mumps, which had been going around. I doubted myself, though, as I did most in most things, and I didn’t tell my parents. I felt slightly guilty that I didn’t. They drove me to a parking lot where I hesitantly boarded the bus for Echo Hill Ranch. We arrived, were assigned our cabins, and so on. Years later, the owners’ son Kinky Friedman—singer, author, and outrageous gubernatorial candidate—described Echo Hill as a camp for over-privileged kids. We were mostly middle-class kids (some upper-middle) who went to public school; our parents were the children of immigrants. At camp we met kids whose parents our parents knew—through Jewish fraternities and sororities at the University of Texas, via other mysterious ways that Jewish Texans knew other Jewish Texans.

More than an aside: My career as an asthmatic began when I was three days old. The affliction still comes upon me after a cold or when I’m exposed to dust, mold or pollen. Because I was sick so often, I missed one-third of my nursery-school classes; I have the illustrated report card to prove it.

I don’t have asthma “attacks.” My asthma creeps, not leaps. I start wheezing, then my chest gets tight. When I was young, my mother would give me a Tedral pill dissolved in a spoonful of Coke. That medicine was later taken off the market. If the Tedral didn’t help enough, I’d take prednisone and maybe an antibiotic; I still take those two for bronchitis. Then as now, the cough would break up and within a week or two or three I’d be back to normal, breathing clearly and being wary, and continuing to take preventive meds.

I started allergy shots when I was three. I stopped at thirteen after spending a night in the ICU on an oxygen tank, but that’s another story. The first night at Echo Hill I was wheezing and miserable. No one had considered that the Great Outdoors would be rife with mold and pollen, and the cabin with dust and more mold. As I lay on my bunk bed, I silently repeated, to comfort myself, “Someday I’ll be as famous as Louisa May Alcott.” Like always, I imagined there was a miniature German village in my chest. I suppose the wheezing must have reminded me of accordions. I felt a counselor slip a second pillow under mine, to elevate my chest. 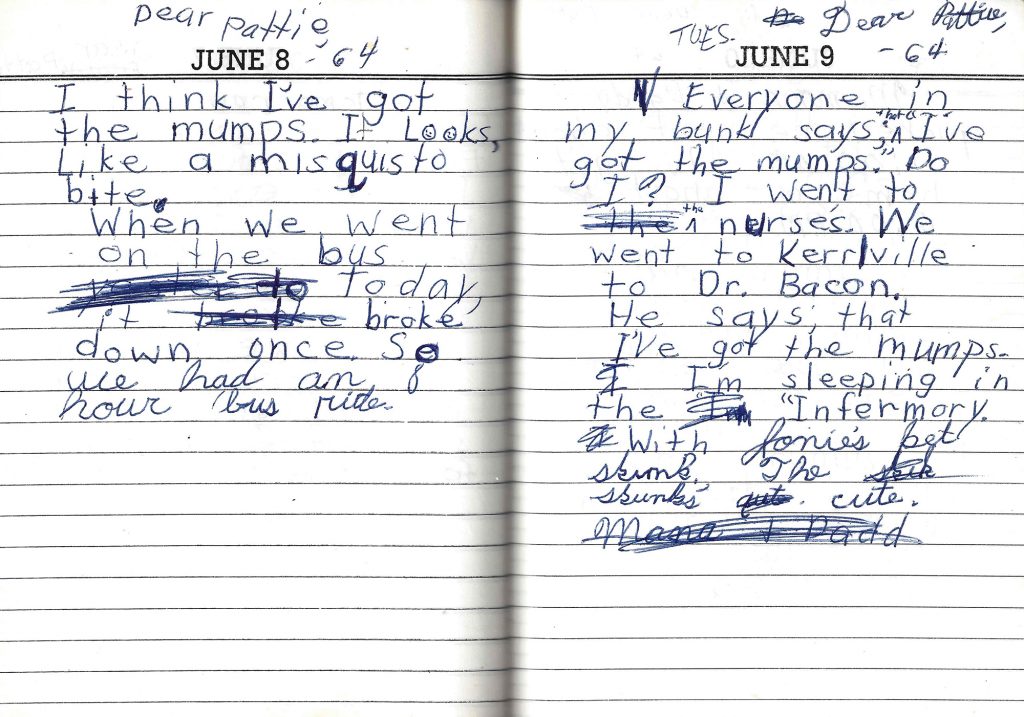 The author’s diary about mumps at camp

The next day my glands were swollen. My self-diagnosis was confirmed and I packed up my shorts and tops with name tapes my mother had sewn on, and I moved into the infirmary. A friendly denatured skunk walked around, as domesticated as a cat. The place was air-conditioned, which helped filter out allergens. I lay in bed and read the books on hand. I read “Pollyanna.” Instead of “said with feeling,” the author often used the term “ejaculated.” I was only a rising third grader, and a naïve one at that, but the verb seemed more than strange.

And the next day my parents picked me up.

And there was Titanic Night, which was like a themed talent show. I got a white cloth and colored it with yellow crayon. I took to the stage and said I had been on the Titanic diapering my baby when the ship hit the iceberg, and my child went overboard. And (fake moaning) all I had left was her dirty diaper.

My performance was deemed the funniest and I was awarded a certificate.

I had asthma the whole time. Let me just say that having asthma at a place that’s supposed to be fun, isn’t. Suffering gives you a bad attitude and you question everything. As they say, nihilism means nothing to the dancing peasant, and I think that holds true for the average camper.

A few years later, a bunch of children and pre-teens in the neighborhood turned their attention to another (Jewish) camp, the one in the Ozarks. Besides hailing from Texas, kids came from the greater cities of the South (Memphis, Atlanta, Chattanooga), the lesser cities of the Midwest (St. Louis, Kansas City) and small towns within both regions. I went to this camp for two years and asthma followed. My so-called “best friend” there used to make fun of my noisy breathing as we climbed the slope to the mess hall. The second year after severe asthma, I took prednisone and got my period twice, which in those days meant no swimming. That summer an older camper, a lifer, went to town with a counselor for a dental appointment. There was a car accident and she died. She had been sitting in the passenger seat, which other campers called the “death seat.” The camp closed after that summer.

I feel for kids now whose summer camps are closed this summer. In a way I envy their love of the institution. I don’t think I hated camp, but not being able to breathe means you can’t enjoy yourself very much. I thought that telling my parents I’d rather stay home would be a defeat, a failure to do my duty. Camp was a waste of my parents’ money and my time and health. But I look back with fondness at that day in infirmary, with the friendly skunk and the fictional girl who always found the best in everything.