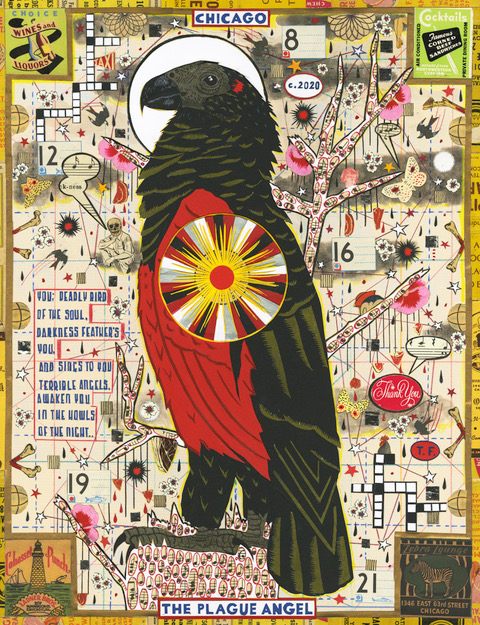 “The Plague Angel” by Tony Fitzpatrick

Every Angel is terrible…
—Rilke

The idiot man-child Donald Trump is having a campaign rally in Tulsa today. The silent whistles of racism are ringing like church bells in the ears of every card-carrying monster in the Midwest and Plains states. It is not lost on the rest of us that holding this bigoted tractor-pull on the day after Juneteenth is a signal to his base—white supremacists, gun nuts and other drool cases who have sworn they will not wear masks or social distance. The deluded fool thinks that by not talking about the virus and ignoring it, he can pretend the whole tragic death spiral is over.

It is not—by any stretch of the imagination. He will look out at his adoring throng of human sacrifices and spout feel-good bromides about a fictitious booming economy and “winning” as well as demonizing, lying about and disparaging anything even remotely decent.

He is the village idiot—elevated to icon by the feeble-minded, the bigots, the privileged and the paralyzingly stupid.

Drunk with power and mentally unravelling to the point where he needs two hands to sip water. A more public demonstration of a manifestly mentally ill man is unprecedented in American politics. Every time I see him attempt to speak publicly I think: “speed freak.”

Every hardcore tweaker I’ve ever known has a similar vocal delivery: halting, dissociative, dry-lipped garbling of the simplest of words. What’s almost comical is when he attempts three-syllable words or any writing with the most basic nuance.

Yeah—that third syllable is a bitch.

He is not a thinker. He is a creature of opportunity and has raised the elements of chaos and distraction almost to a grimy art form. He’s a scavenger who preys on the weak-minded and fearful; and those governed by their common shared hatreds. This is Lord of the Flies, in real time, and he is a mad dog—only—cowardly.

“In the land of the blind, the one-eyed man is king.”

He has to know that people will die because of this rally. That his rolling goat-fuck of a presidency will soon be kicked to the curb. That 120,000 Americans died because of his incompetence and more will die as his political rallies of the truly unfortunate examples of the human zoo roll on.

5:44am Sunday
The good news about Trump’s Tulsa corona-fest is the venue was only half-full. Maybe working-class Americans are finally onto him. Perhaps his act has finally begun to wear thin, even among the mouth-breathers and drool-cases that cast their lot with him in 2016. Among the way-less-than-capacity crowd were a number of paid actors who got fifteen dollars an hour to pretend they support the moron. Funny, the only time the GOP seems willing to pay a decent minimum wage is at Trump rallies.

He claimed the paucity of support was due to “some very bad people” outside the arena. The police reported that while the protest was enthusiastic, it was peaceful. This is not the first time Trump has lied about the goings-on at one of his shitkicker pep rallies. In March of 2016, he was scheduled to speak at the UIC Pavilion, here in Chicago. My daughter insisted on going. It was not long after my heart surgery and I was still wearing a brace on my left leg. I also was well aware of what went on at his rallies. Just days before, some senior citizen had sucker-punched a young Black man at one of his gatherings with the tacit approval of the crowd. The cops jumped on the Black kid. All of this happened while Trump exhorted the crowd to “Knock the crap out of them.”

There was no way I’d let my daughter go there without me. I had a brace on my leg and a cane. As we moved toward UIC, right near the intersection of Van Buren and Racine, it was announced that Trump had cancelled—leaving about 20,000 of his supporters inside the venue to make their way home through about five times that many protestors. Kind of a dick move in and of itself.

Trump told the press that the police had requested that he “reschedule.”

Of course, this was a lie. The CPD had made no such request. In fact, the one person who was guaranteed safe passage in and out of the venue was Trump.

It is not an accident that his people chose UIC. It is a stone’s throw away from the city’s largest Latinx population—who he’d been demonizing his whole campaign. This neighborhood is also, proudly, one of our most diverse.

Trump just wanted footage of Chicago, our city, as an out-of-control beast (“What the hell is going on in Chicago?”) to use for campaign fodder. He didn’t get it. While there were skirmishes and it was ferociously anti-Trump, it was largely peaceful—despite his followers and creeps trying to incite incendiary actions that they could capture on their cell phones. That night, Trump left Chicago with our boot-print on his fat ass.

He’s been loath to come back ever since.

What has to happen in November is massive voter turnout. The defeat of Trump must be so resounding, it must also relegate this GOP of his making to the dustbin of history. In their enabling they damn near created the American equivalent of Hitler or Pol Pot. Have NO doubt that this man is capable of far, far worse than he has already perpetrated—we already have children in cages on the border. A hateful campaign against Black, Muslim and Latino Americans, as well as women, immigrants and anyone else who evinces fairness and decency. We have 120,000 American fatalities from COVID-19, which scientists tell us could have been merely a fraction of this death toll had our country been proactive and vigilant and NOT insisted it was a “Democratic Hoax.” So far? This miserable example of a president has touched all of the bases for the want-to-be dictator.

November is coming. Stick a fork in his ass—he’s done.

The Plague Angel…
You; Deadly Bird of the soul,
Darkness feathers you,
and sings to you,
terrible Angels
awaken you
in the howls of the night…

As always, Tony is both a great writer and a great artist. For a real treat, get a copy of his book “Dime Stories,” with dozens of paintings originally in New City.