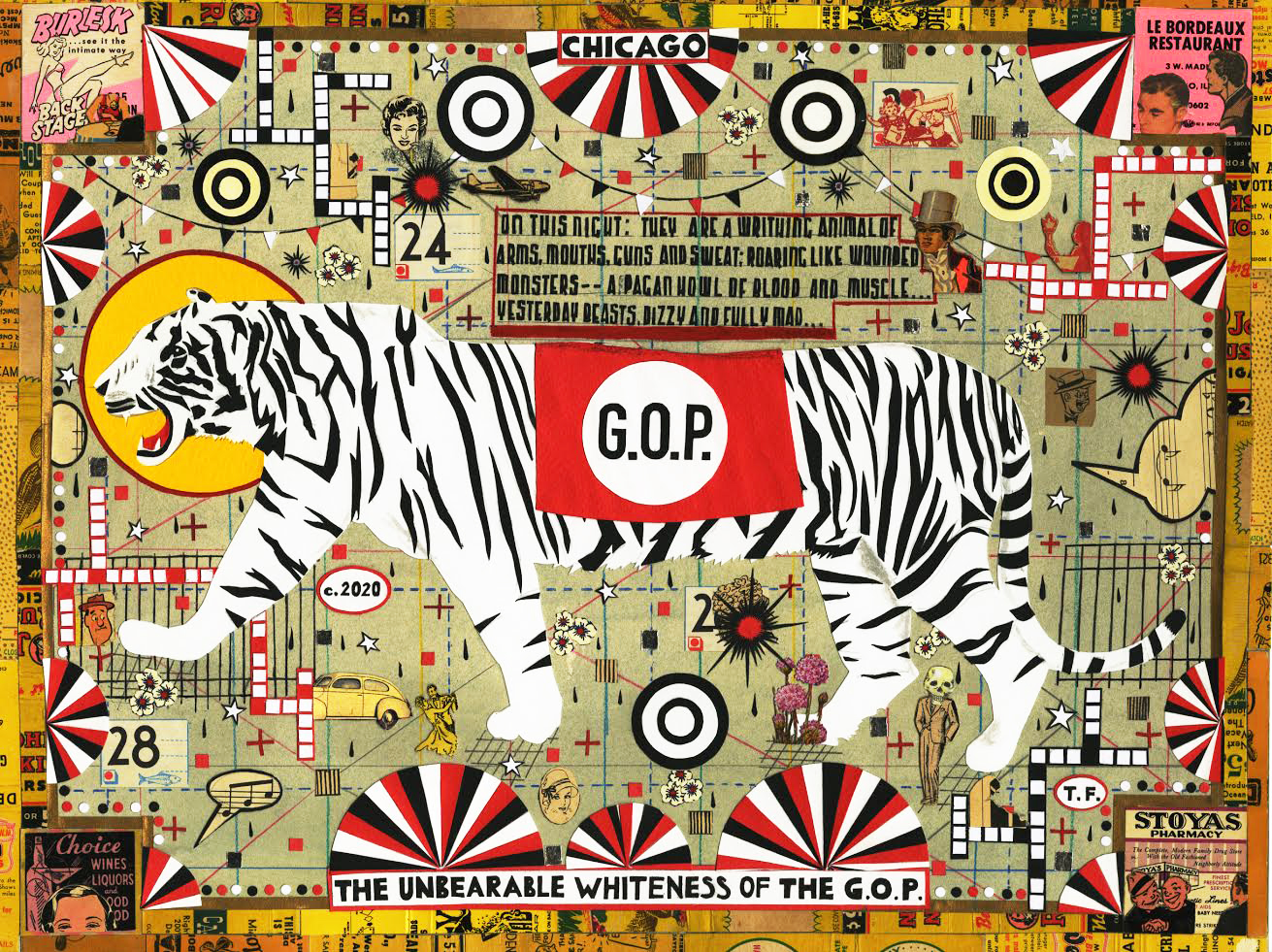 The Unbearable Whiteness of the G.O.P. by Tony Fitzpatrick

On This Night:
They Are A Writhing Animal
Of Arms, Mouths, Guns And Sweat:
Roaring Like Wounded Monsters:
A Pagan Howl Of Blood And Muscle.
Yesterday Beasts—Dizzy And Fully Mad…

The White Noise that is Donald Trump continues along his path of abject ugliness all the while finding new ways to be the most reprehensible creature in the history of American politics. His latest gambit is to attempt to abolish the Affordable Care Act for the sole reason that this was the jewel in the crown of President Barack Obama’s administration.

Trump’s cheap and blind rage at Obama’s achievements are easily understood when one contrasts Trump’s achievements—which is to say, none. In the reflection of contrasts, Trump can see himself for the small, banal and utterly insufficient man he is. Obama is beloved. Trump is not.

Obama has an easy charisma and a radiant charm. Trump does not.

Obama is presidential and dignified. Trump is a circus ape in a bad suit, who has piss-colored cotton candy for a haircut.

Trump would rather be feared than respected or admired.

Still, one must admire his acumen for piling calamity on top of calamity in order to BE the twenty-four-hour news cycle. He thinks if he can achieve all-chaos-all-the-time, he can crowd COVID-19 off the front page.

Now that the Trump Virus has killed over 125,000 Americans and is spiking with unprecedented ferocity in the South and the Southwest, perhaps it is dawning on those who voted for him and still support him that he is—literally—killing them. For three-and-a-half years I’ve tried to fathom why the people who suffer the most under Trump are so adamant in their support of him and I think I’ve figured it out: he is their reflected selves.

Really. In him they see their own deficiencies, failure and lack of curiosity about anything other than themselves. He absolves them of their own shitty choices and disappointments. He assures them that their woe is someone else’s doing: Black people, Muslims, immigrants, women and the well-educated. He panders to racists with “White Power” videos in his tweets. He refers to Black Lives Matter activists as “terrorists” while the KKK gets a pass. He never runs out of scapegoats or human sacrifices.

George Lincoln Rockwell would have been at home in Trump’s America. For those of you too young to remember, Rockwell was a former military man who founded the American Nazi Party in 1959 and viewed Adolf Hitler as “The White Savior” of the twentieth century. In his lifetime, he was considered deeply unpleasant and a fringe loon. He had the habit of wearing a swastika on his armband and was repudiated by Republicans and Democrats alike.

The other thing that’s been beyond me since November 2016 is how willingly Republicans ceded their party over to Trump and his Evangelical Nazis. The G.O.P. of his making is an unholy creature composed of equal parts of racism, misogyny, xenophobia and religious mania. One wonders if any of them remember honorable men like Everett Dirksen, Jack Kemp, Barry Goldwater or even Abraham Lincoln. While one might have taken issue with the policies of the above-mentioned men, one never doubted their seriousness in trying to make life better for Americans. I wonder if Pence, Graham, Barr, Nunes, Jordan and the other Vichy-style enablers ever think about how they’ve dishonored these men and their legacy of fair play. One must credit Mitt Romney and Jeff Flake for speaking out loudly against Trump from the beginning—I agree with neither man about anything else—but their vocal opposition to Trump has been admirable—or what passes for admirable these days.

I also am astonished at how docile the press has been when questioning these assholes. I long for the return of Sam Donaldson, Dan Rather or Mike Wallace—who would not tolerate evasions or dodges.

It is time to take off the gloves and hit them harder and harder. It is the only thing a bully understands. Walk into the monster’s cave—and spit in his mouth. We’ve seen how rattled Trump gets when reporters press him even a little—the time has come to press him a LOT.

This past Sunday, Pence gave an interview with “Face the Nation” wherein he lied, parsed, evaded and misled the American people with bullshit about “flattening the curve” while the day before Florida announced more NEW cases of COVID-19 than any state has ever had in a single day and this walking Q-Tip, with a straight face, continued to lie and prevaricate. At a certain point one wished the reporter would have said “Mr. Vice President, this is a lie—and your lies are costing thousands of Americans their lives. How Dare You.” Pence isn’t quick enough on his feet to respond in a salient way—he may be less eloquent than Trump if this is possible. I gave myself permission to hate Pence when he could not bring himself to utter the words “Black Lives Matter”—a fucking company man to the end.

I’ve taken some heat about the accompanying art piece. I posted it on Twitter, Facebook and Instagram and a bunch of wingnuts accused me of conflating the G.O.P. with Nazis.

They’re absolutely right. I did.

I think that the current monsters masquerading as leaders are every bit as capable of this darkness.

I don’t believe there is the least semblance of anything good in the Republican Party anymore as long as Trump is its leader. We already have children in cages on the border. Militarized police agencies murdering Black Americans with impunity. Policies of hatred and hostility toward our Latinx, LGBTQ and Muslim brothers and sisters. Just yesterday, it was revealed that Trump’s office crush, Vladimir Putin, put a bounty on American Soldiers serving in Afghanistan.

So you tell me… Where am I being unfair?

Our Republic is like a fish out of water right now, trying desperately to right itself. And you know what they say about fish: they rot from the head down.

Kafka once reminded his readers, I believe it was either in “AmeriKa” or “The Castle,” memory fades as the years fly by, in his analogy regarding a toolbox that everything that fits in a toolbox ought to be about repairing what is possible with the proper tools. This can be interpreted in numerous ways of course and certainly one of them is the proper use of words to approach a problem that needs repair. You “nail” it here,Tony! Terrific writing. I hear you…loud and clear.