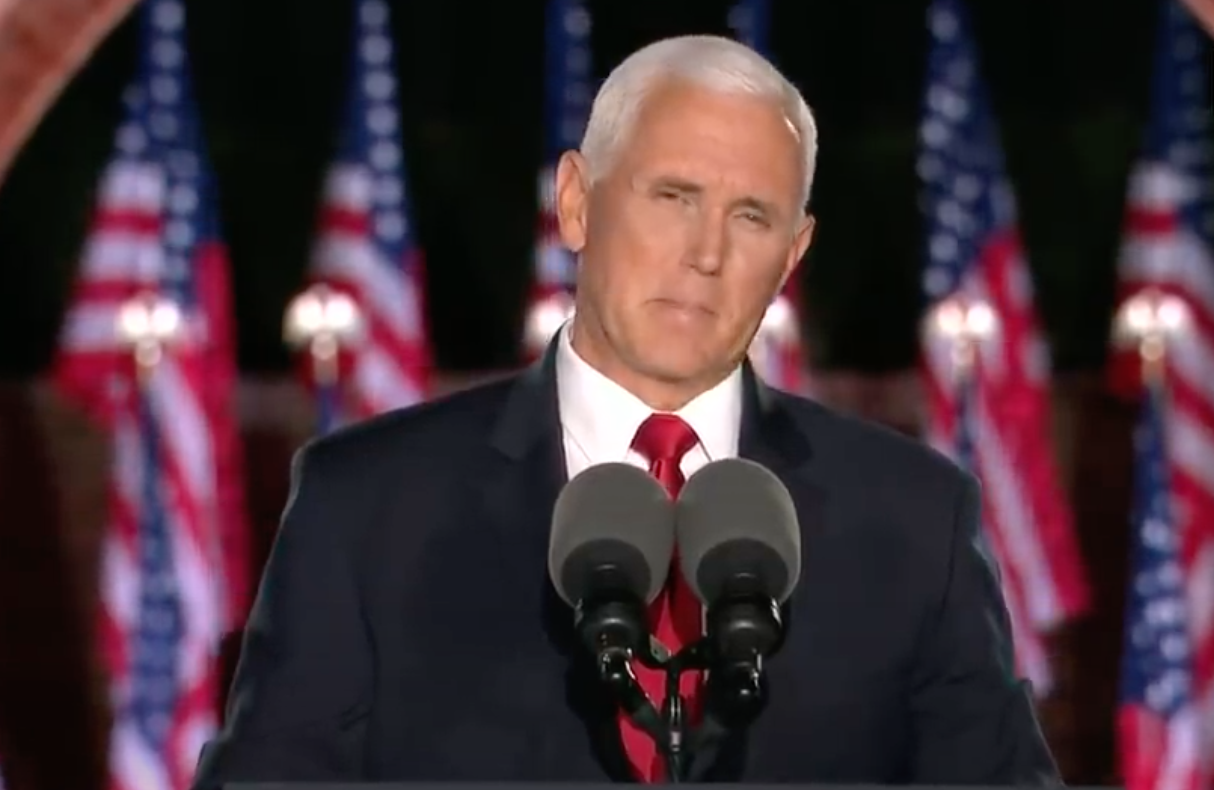 While news, big news, was breaking all across America on Wednesday night regarding continued violence in Kenosha, Wisconsin over the murders of two Black Lives Matter protesters in the wake of the police shooting of Jacob Blake, you wouldn’t have known it from watching the third installment of the Republican National Convention. The entire National Basketball Association opted to NOT play last night in protest. Not the RNC. To them, this was happening in someone else’s America. An America where some spoiled little shit, a cop wannabe, travels to another state and murders two protesters with an AR-15 and then walks away without being detained, or even questioned by police. A seventeen-year-old with his own AR-15. A weapon of war.

I kept waiting for the Republicans to address this. It never happened. The CNN hosts kept reminding us that most of the programming had been prerecorded before the party conducted its third three-hour kneel-and-bob session for Donald Trump.

In the minutes leading up to the broadcast, CNN hosts were all over this. Anderson Cooper tried gamely to infuse the evening’s proceedings with the story that should have been front-and-center in the convention: the police shooting an unarmed Black man in the back seven times and paralyzing him.

The talking heads on Cooper’s panel were some of the usual suspects, including the nauseating Rick Santorum who could not, for the life of him, pull his head out of his ass long enough to quit parroting the Trump “law and order” party line to save his life. It’s funny watching Anderson Cooper’s face when he is talking to someone in public life who is so balefully stupid that it is beyond words. He knows Santorum cannot help it, and it is hard to hold a logical debate or conversation with someone incapable of logic.

The convention opened with one Rabbi Spero offering a “prayer” which was a thinly veiled rah-rah for law and order and Trump Rabbi Horse’s Ass did nothing to uplift the spirit of those watching. Not one word about the dead in Wisconsin.

What would a Trump pageant be without a Barbie Army of telegenic women to sell his bullshit? South Dakota Governor Kristi Noem, or as I call her, “The Stepford Governor” opened the evening’s comments with more “Trump Good, Biden Bad” la-la that has been droned on about so many times, it could be a sleep-aid app.

Next came Scott Dane, the executive director of “Associated Contract Loggers & Truckers of Minnesota,” pissed off at “environmentalists” who are trying to “ruin our way of life” by protecting old-growth forests so the earth can breathe. I want to tell Log-Boy that there are 53,000 loggers in ALL of America—as opposed to 570,000 truckers, and a few million Uber drivers. Fifty-three-thousand is not that many jobs over a nation and geography as vast as the U.S. I’m betting a logger’s job skills translate to many other industries as well. Find a different gig, pal. There is a reason nobody sells buggy-whips or has livery stables anymore. Of course, he blames Biden.

Fifteen minutes in: Someone finally mentions the hurricanes coming up the Gulf Coast.

I’m getting pissed. The perpetually aggrieved White privilege of this whole charade is manufactured, mechanical, pull-at-the-heartstrings manipulation that is the very core of “Trumpism.”

Retired Lieutenant General Keith Kellogg served his country honorably and I am grateful for his service but I don’t need him to explain public policy to me or pitch a lot of boo-hoo about our country being in “decline.” I want to tell the good general:  it’s only been in decline since your boss got elected.

The Trump people are relentless in running the “God Squad” at us.

Tera Myers is the mother of a child born with Down syndrome. One cannot help but sympathize with her. I’m in awe of ANY parent who has a special-needs child. I know how hard they have to work on behalf of their child. But that is what parenthood IS. We always advocate most urgently for our children. That she used this story to frame a stealth attack on a woman’s right to choose is nothing short of nauseating.

From there Kayleigh McEnany, Lara Trump and Karen Pence all did their bit to prop up these two mutts. A collection of morons cheerleading for bigger morons, all of them were pimping the “pro-life” company line and all of them lied through their teeth. A more self-congratulatory gathering is beyond possibility.

Two hours in: Not a mention of Jacob Blake; the two men murdered in Kenosha… nothing.

Michael McHale, president of the National Association of Police Organizations, confirmed every awful fear you’ve ever had about how self absolving the blue wall is about brutality. His speech was scary, unaware, stupid and steeped in superiority and privilege. He also took the opportunity to trash our city: Fuck You Cop.

They also made vile spectacle of a young, legless man named Madison Cawthorn, who is a newly minted “real estate investor,” whatever that is, and Republican nominee for Congress from North Carolina.” He, like ALL of the GOP, is fond of invoking Martin Luther King when it suits them—they also cherry-pick Dr. King’s words to tailor their privileged narrative. They made a production of him standing up on prosthetic legs and as they did that, I could not help but think of Jacob Blake and how he’ll never stand again.

Jacob Blake will not be mentioned at all in this Red State gang-bang.

When Pence finally speaks, after a big gooey montage of his non-achievement, it makes sense he was a radio guy. I was once a radio guy and believe me, you meet some grade-A morons in that industry. For every great radio person you meet, like Lin Brehmer or Terri Hemmert or the late and sorely missed Studs Terkel, you also sadly meet idiots like Mike Pence; who if he’d ever had an original thought, it died of loneliness. He was on one of those red state radio gabfests that stoked the fears and hatreds of rust-belt America.

His speech was an unctuous hand-job of well-worn conservative platitudes and unaware blather about the robust economy—huh?—and inflating Trump’s non-achievement into achievement. He also did a brief mention of “Kenosha.” It’s weird: his speech was in real time, he had the opportunity to address the shooting of Jacob Blake and the two murdered men. Not Pence. For Mike Pence, ever the “company man,” this was happening in someone else’s America.