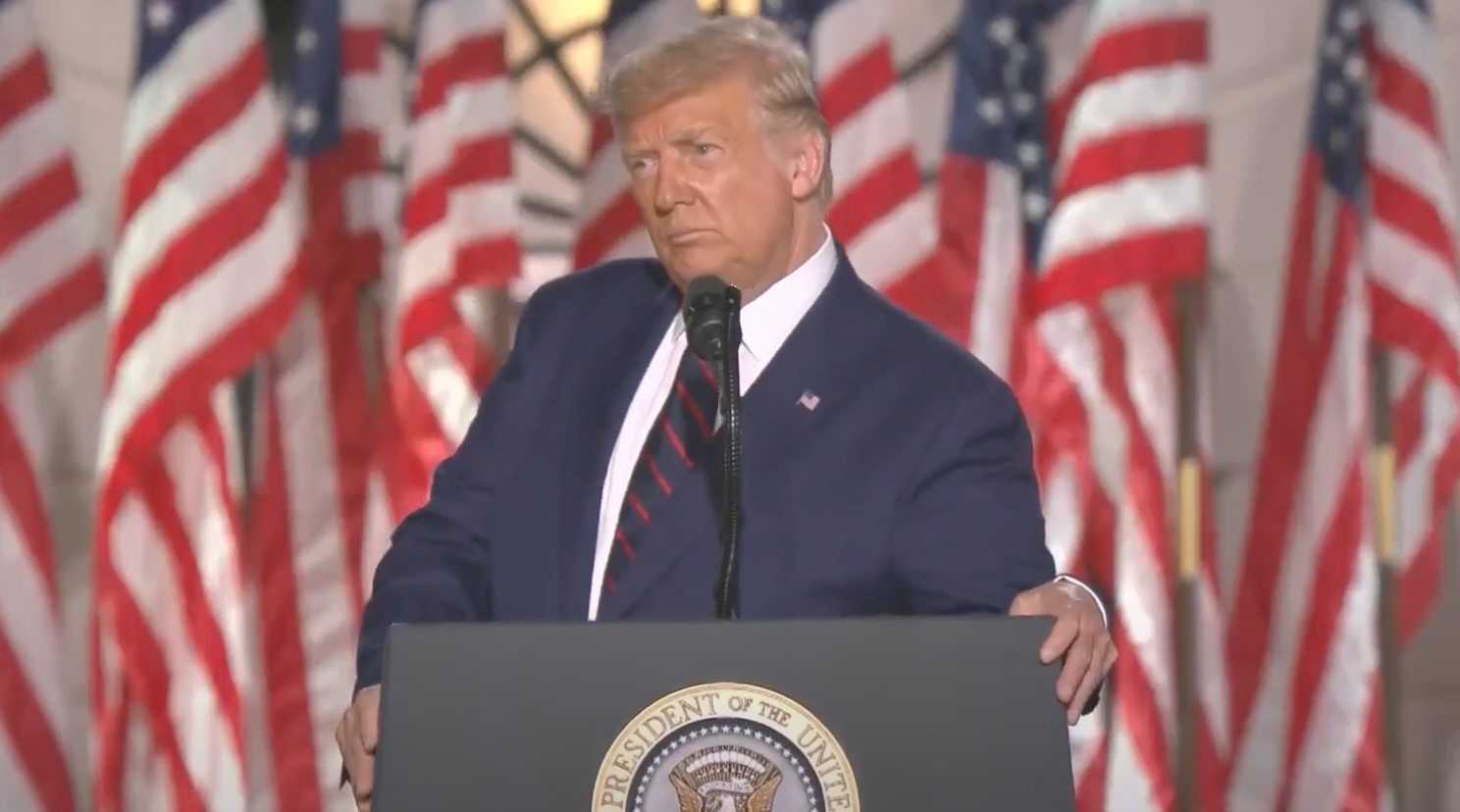 When you voluntarily stick your own head into the ideological commode that is the Republican National Convention, you maybe have no right to bitch—but I’m going to. Last night, the whole chessboard became visible: keep painting Joe Biden with the word “socialism.” Keep acting as if the COVID-19 pandemic is China’s fault and perhaps a premeditated, intentional act of sabotage. Keep pimping the “pro-life” agenda in order to rob women of their reproductive rights. Keep yelling, “They’re coming to take away your guns!!!” Keep evading ANY responsibility for the unrest in our cities and towns across this country. Keep using the grief of people of color to embroider into a narrative of the victimhood of the Republican Party.

The tsunami of bullshit unleashed last night was appalling in its cynicism and dishonesty. It was also beneath contempt in using Black Americans as props, while their fellow Black citizens are continually degraded, economically impoverished and murdered on American streets.

The absolute blindness and denial manifest in the GOP vision is criminal on its very face.

On the left, we are accused of living in a bubble. I cannot think of a more carefully constructed bubble than the one crafted and burnished across the 400 years that is white privilege. Over the last four nights, the amount of entitlement and faux piety on display was beyond the pale. As citizens, we no longer recognize our own country.

The moment the human zoo that comprises the Trump base needs to come to is the realization that the rioting, the pandemic and 180,000-plus American deaths, and the loss of nearly one-third of our economy are byproducts of the Trump presidency.

From the moment the bigoted, homophobe preacher Franklin Graham gave his opening prayer and endorsement of Donald Trump, the whirlwind of bullshit landed with the force of a Category 5 hurricane. Say this for the assholes: this thing was choreographed like the opening of a Broadway show. And, as I learned from Neil Steinberg’s column this morning, they tapped a couple of producers from “The Apprentice” to polish this turd. They also went out and hired really good speechwriters. Trump himself, who could not cobble together a fucking grocery list on his own, stayed on the prompter and they made him eliminate his proclivity for wandering off into diversions and delusions in his speech—his handlers, and believe me, for this event, he was handled, finally got him to listen.

A couple thousand people on the White House lawn—all of the dumb fucks not wearing masks or practicing social distancing—listened while Trump gave a longwinded, heavy-on-accusations-and-denials-as-well-as-light-on-verifiable-facts acceptance speech. They applauded every thirty seconds like trained seals and when the camera panned around, one got a look at the grimy specimens that comprise this slob’s universe. Mnuchin, Barr, the QAnon lady who just won a primary, and Rudy Giuliani, who looks more and more like Simon Bar Sinister from “Underdog” everyday. Giuliani gave a batshit, rubber-room-worthy speech endorsing Trump. It appears that Rudy no longer has all of his dots on his dice. He screamed and yelled about the lawlessness on American streets and lack of respect for cops. He did all of this braying without mentioning once that this was all occurring in Trump’s America. Volitional blindness. Get off my lawn!

The oddest thing about Trump’s speech itself is that none of it was memorable. There was one moment when he referred to a “Biden-Bernie manifesto,” which is laughable, but not to his crowd of mouth-breathers and monosyllabic Neanderthals.
Not once did he denounce the white morons in camo waltzing around American cities toting weapons of war IN FULL VIEW OF LAW ENFORCEMENT. So I’m a little more than indifferent when the GOP runs cops at us with the Blue Lives Matter boohoo. For them to stand back and cede the powers of law enforcement to the mob is a stone dereliction of duty. A friend of mine, the good journalist Robert Chiarito, was in Kenosha the day of the murders of two protestors. He was hard-pressed to find any cops. He posted on Facebook that he was wondering where the Wisconsin State Police were, or the Kenosha Police. The only place he saw any cops were some sheriff’s officers around the county building. His post ended with the now-prescient thought: “I have a bad feeling about this.”

Earlier in the evening, the GOP trotted out Ben Carson to mouth some law-and-order la-la regarding the attempted murder of Jacob Blake by Kenosha cops. It rang hollow and was backloaded with the “pro-life” agenda. Ben isn’t long on nuance or subtlety.

Trump’s strategy is a master class in gaslighting: accuse your opponent of acts that you, yourself are guilty of. He acts as if the unrest, rioting and looting are happening in Biden’s or Obama’s America. He cannot cop to the God’s honest truth that ALL of this is a direct result of almost four years of Trumpism. The body count of the Trump presidency, starting with Heather Heyer in Charlotte, is unrelentingly grim. Do not forget Heyer—she died a decent and principled human being. She was run down by a muscle car driven by a white supremacist I will not name. It should have been apparent THEN that Trump was at war with the very notion of a more equitable America for all Americans. He referred to the white supremacists as “very decent people.”

Ivanka Trump was tasked with the introduction of her loser father, which she did with alacrity. The most prized of the Barbie Army in Trump’s cabal, she is also the most natural politician of the bunch, at complete ease spewing bullshit. She’s likable in a way that is scary. The other morons are completely forgettable but she could be in public life for a long time and this should scare the fuck out of you.

Earlier, the GOP exploited the grief and pain of Ann Dorn, the widow of a St. Louis policeman who was shot to death while attempting to arrest looters in a pawn shop in the aftermath of the George Floyd protests. Again, one cannot help but empathize with her loss and pain. Dorn’s daughters, however, are angry at Trump using their father’s memory to further his agenda. Officer Dorn himself didn’t like Donald Trump one bit and was especially incensed at Trump’s frothing vitriol directed at Colin Kaepernick. I only can hope that Ann Dorn someday realizes that her husband’s death was due to criminals and not people peacefully protesting for change, and that a great much of this is due entirely to the long, sad shadow of Trumpism.

There were others who spoke earlier, more Black Americans cynically used as props and one cannot hold this against them. They’re unknowing elements of a Trump Reality TV show, a pageant of bullshit in which their good faith is misused and abused. EVERYONE is a dupe to this guy. Alice Johnson’s story moved me (Trump granted her clemency for post-prison criminal justice reform) but to see her used this way makes one despair of human beings.

A bullet-headed moron who runs the UFC, one Dana White, gave a full-throated endorsement while one wondered how this outpatient ever got near a presidential campaign. So did Tom Cotton, the moron senator from Arkansas who blathered on and on and said nothing salient.

The Muellers, whose daughter Kayla, was held hostage, tortured and murdered by ISIS, were brought out so that the Trump campaign could exploit their overwhelming grief in order to blame Obama and Biden for the acts of madmen.

It is beyond belief, the GOP’s willingness to employ parasitic strategies in order to exploit the pain of real Americans. It is the pornography of grief.

That number will only grow: some scientists and medical experts think it could go as high as 300,000 before the end of the year. These are facts Trump cannot hide from or blame the Chinese for. He closed his eyes while a plague took hold of our country and laid waste to 180,000 of our citizens. Our streets bear all of the marks of four years of Trump. Shops and stores are boarded up because the police cannot stop murdering unarmed Black men.

As a reflex we must remember to wear a mask everywhere we go. Americans view each other with distrust, contempt and suspicion. Thirty-percent unemployment. Everything that keeps a culture healthy—the arts, sports, live music, community gatherings, wakes, weddings, funerals, graduations, picnics—has been shut down. We are immensely more alone in the world. Decent countries will not have us. All of this ran through my mind as I watched a demagogue, who would burn down the world in order to further aggrandize and enrich himself, accept the nomination of the Republican Party.

Tony brings the fire and passion–just as he does in his art. A needed voice of anger and disgust in these troubled times.