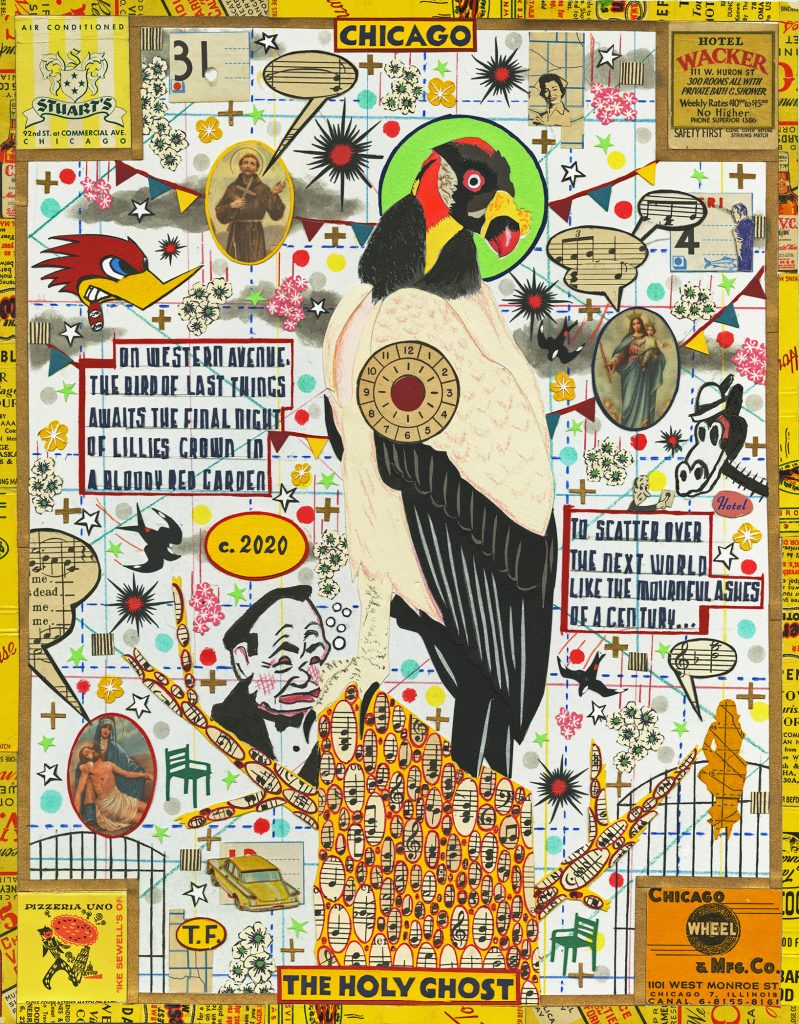 As the COVID-19 pandemic rolls on, one cannot help the sinking suspicion that this is the beginning of a new epoch in the life of the world, not the end. The efforts at feigning “normalization” and “reopening” only add more fatalities and sickness to our country.

I’ve attempted to hide from this by walking in the park and by making some of my works into jigsaw puzzles to avoid financial disaster and perhaps take people’s minds off of the current plague, however briefly. This period threatens to dehumanize us; coarsen us to the need and pain of others around us. For some reason Western Avenue is my metric—my measuring stick—for it is a street peopled by working people: Puerto Rican, Mexican, white, Black, Polish, Ukrainian, Italian. It is the mix of people I’m around every day. The wear on all of us is psychologically, and sometimes physically, visible.

Combine this with the protests, riots and looting that are the direct consequence of the continued wholesale slaughter of young, unarmed Black men and you have a world that would have been almost unfathomable just one year ago. We also are burdened with the least possible competency of leadership in the history of the Republic. We live under the rule of a nihilistic, racist, misogynistic, greedy and stone-ignorant wannabe plutocrat and thirty or forty percent of us think this is just fine?

There are people I cannot talk to and will never make peace with because of their support for this fraud. People I used to like. People who have bought into the fear and resentment of anyone unlike themselves. I try to keep my marbles by walking in Humboldt Park and watching people celebrate being alive there. There are those in this neighborhood who avoid the park on weekends or the weekend of the parade—this year I made sure I was there. The smell of food cooking on a grill. The loud salsa and jazz made me feel alive and grateful for all of the people in Humboldt Park, who are unafraid of color, or music or food, or the hot weather or cool weather. Nobody ever gets more joy out of a public park than my neighbors here. When I watch them celebrate life, I feel more alive myself. It pulls me out of the tailspin of Irish melancholy.

This park has been my coping device for the last six months. Each day I leave there after a dose of nature, birds and the fellowship of some friends, ready to face the day and able to cobble together something like hope.

A few months hobbled by with unrelentingly grim tallies of the dead. The news filled with the daily rants, tantrums and moronic statements and lies of a man so starved for attention he’d gin up the body count with inaction and “alternative facts,” going as far as suggesting people eat and ingest bleach to combat the virus. A narcissism so toxic that it is impervious to facts and medical science.

He stands next to the nation’s acknowledged expert on pathogens and viruses and insists Dr. Fauci is wrong and HE is right because of “what his gut tells him.” (Here’s a newsflash for the “Gut”: maybe tell him about fewer Big Macs and more salads.) Trump looks like a walking heart attack. There have been whispers about “mini-strokes” and the possibility of a heart attack. I do not wish this on anyone, although were it to happen, it would certainly go down as my favorite heart attack or stroke. Just sayin’.

It’s hard to find anything like faith in your fellow man at this fractured moment, yet I have it. I always tell myself that the most precious assets we have as a community are each other. I believe this. I do not have a deity, an imaginary friend in the sky. I believe in the common decency of human beings, because I have seen it, I have been the beneficiary of it. At every juncture in my sixty-one years on this planet, people have had to cut me a break. I am a deeply flawed man and the kindness and understanding, and at times the forgiveness of other people, is what has sustained me. I’m not special, I think everyone has moments, flaws, idiotic digressions and mistakes which make them as human as the next person. The lesson is not to let them define you—learn from your missteps. I say all of this because the pandemic has brought our flaws, as well as our strengths, into high relief. It also makes me cling harder to my faith in the inherent decency and kindness of my community.

I went last Sunday to walk in Humboldt Park—to feed the ducks with my pals Kevin and Joe. I could smell food cooking on the grill and it made me wish I could grab a plate and pass my pasty Irish ass off as a Puerto Rican family member. There were Tito Puente songs blasting so joyfully I even danced a little while I walked and some women smiled and shook their heads. I guess I lack a certain rhythm. For a time, all of the Trump bullshit, despairing coronavirus bulletins and soul-crushing racial division were in another place.

There were families fishing and feeding the geese, riding in those four-seater bicycle wagons which I have no fucking idea what they’re called. I overheard people talking about baseball—you want to find some Sox fans?—go to Humboldt Park. I wear my Sox stuff and I am among friends there. There were also guys selling paletas and Italian ice—sometimes when we run into the one guy, my friend Rodney gives him a couple of extra bucks and the guy will pour a shot of rum into the coconut Italian ice. I’ve been there so many Sundays I know people by name, hell, I know their dog’s names. It is a great place to befriend dogs, they’re everywhere.

I walked out of the park talking to the people I’ve gotten to know over these last months—catching up with them, wishing them well, grateful for their company and their music and presence in this beautiful many acres of nature in the middle of a big and cruel and angry city. When we start moving down Western Avenue, we are back in the world of angry working people who’ve been hobbled by the pandemic and stores are still boarded up and people eye one another with suspicion and distrust. This is Western, the Working Class 500, who along with the poor are the Americans who take the brunt of every shut-down and economic inequity.

I feel, sometimes, that the Holy Ghost of Fate hovers over us watching for a weakness, watching for the moment that takes away our better self, watching and waiting for us to surrender. I look around for a moment that offers some respite from this odd dread in the middle of a beautiful day.

About a block ahead I see a young Black kid help an older woman gather her groceries, which spilled when a wheel came off of her cart. He holds off traffic with one hand and gathers her rolling cans with the other. He manages to gather it all and get her to the other side of the most unforgiving avenue in the city. When they realize that the wheel on the cart is shot, he hoists the two bags out of it and follows her down the sidewalk. They are laughing and walking along like old friends. It takes place in a minute to a minute-and-a-half, but it is enough.

I hope this is contagious. I hope random acts of kindness become a priority to us. I hope we achieve regime change in November. I hope we come to embrace better selves. I hope we learn to trust each other. I hope to be less angry.