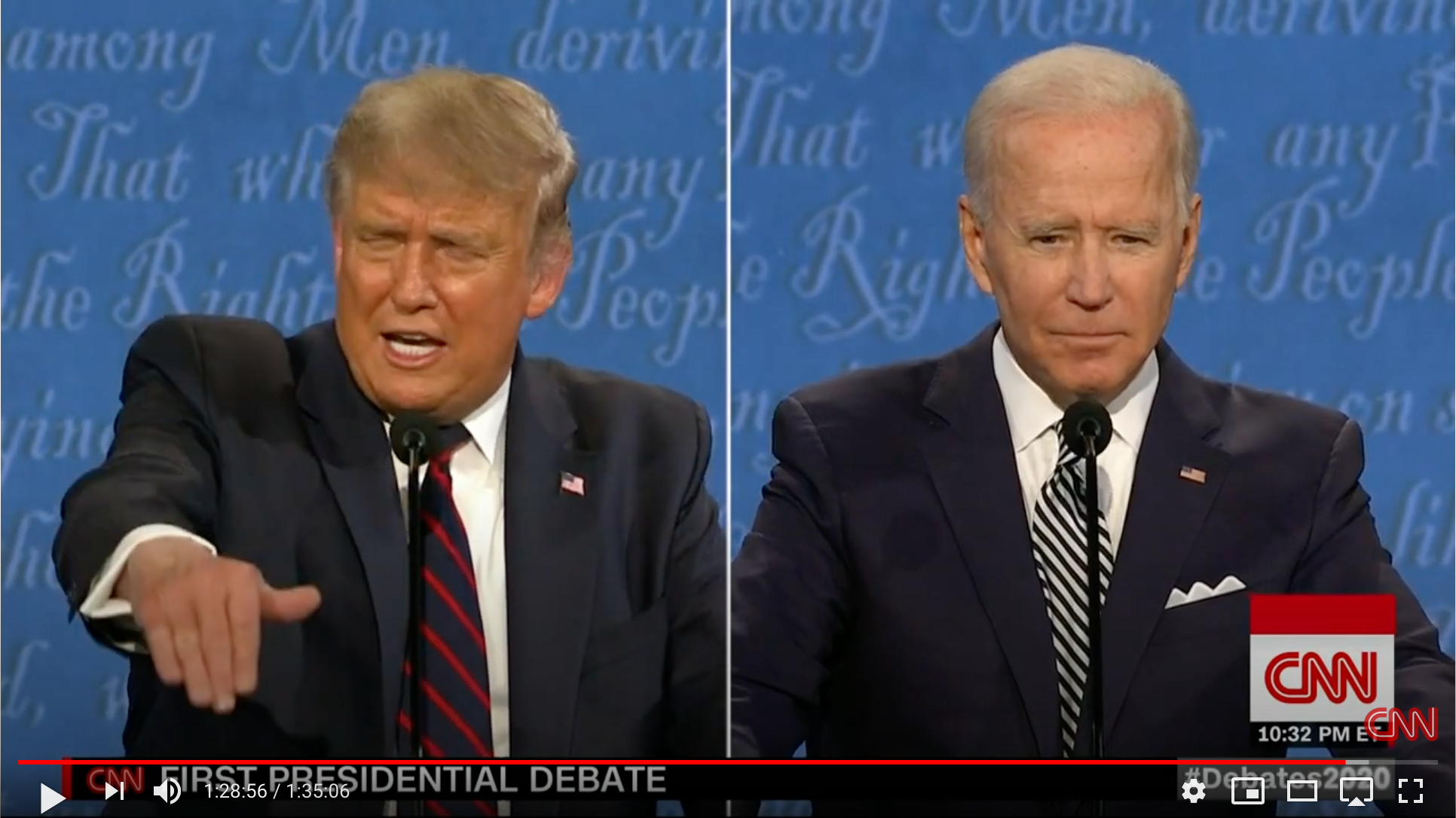 In the pre-coverage of the last night’s first Biden-Trump debate, one of the CNN talking heads introduced us to fourteen “undecided” voters who were waiting on last night’s debate to see which of the candidates they would vote for. Honest. I shit thee not. There are still Americans who are “undecided.”

I said to my dog, Huey, “Huey, look at them carefully… Those are the fourteen dumbest motherfuckers in America.” Huey emitted a low groan and went back to sleep.

I should have joined him. The only thing comparable to last night’s debate I’d ever witnessed before was when I was seven years old at Lincoln Park Zoo. I was in the Primate House and the apes were flinging heaping handfuls of chimp shit at each other. The only difference was they looked like they were having fun.

It opened with Trump saying the word “socialist” like Rain Man every fifth or sixth word, and it was on. His strategy remained: chaos. Interrupt, interject and accuse. Make sure there is a hateful and personal ad hominem attack attached to every bit of commentary. Attack, attack and attack, omitting any element of truth.

I wish I could say Biden bested him, but I can’t. Biden has made a believer out of me but he’s debating a creature who may well be debate-proof. All night long. Trump danced a tango on Chris Wallace who could not control the candidate. In fact, Biden, tired of being interrupted every three seconds, resorted to the same thing and pretty soon we no longer had a presidential debate but a raucous corner bar-style hurling of invective and accusation. We didn’t learn a goddamned thing.

Biden sportingly tried to bring things back to a sober reality by nailing Trump with facts: 200,000 Americans dead on his watch and his shameful hiding of the pandemic’s lethality right from the beginning. Trump, knowing he cannot defend this, started blubbering “The Chinese Plague”!!! and “If it were on your watch, Joe? TWO MILLION would have died… La La La La La.”

Biden then defended what Trump is certainly trying to undo—Obamacare. He said he realized there should be a public option and it needed work. I kept wishing Joe would have reminded this shaved ape that it was Republicans who gutted much of the ACA and that Obamacare was a policy crafted, in part, by that well-known socialist Mitt Romney.

It was nearly impossible for Biden to make any salient point because Trump, per his strategy, interrupted constantly and interjected lies, liberally trying to shake Biden off his game. At times, it worked. Nobody in the history of presidential debates has ever had to debate anyone like Trump. He is boorish, unaccountable, dishonest beyond the pale and, apparently, there will be no consequences for his appalling behavior. In Donald Trump World, which is where he lives in his head, he’s the King of Shit Mountain.

It seems to me there is a way to Trump-proof these debates—do them in soundproof studios and when he starts his shit or goes over the allotted time, turn his mic OFF.

The same goes for Biden. I want to blame Chris Wallace, but given the setup there was not a lot he could do. He was up against a man who ignores the rules and who has never suffered the consequences for violating them. The ONLY thing Trump has, the only thing that works for him, is VOLUME. Take it away and he’s fucked. Take away the media and he is a babbling Brownshirt in a football stadium with a few thousand pissed-off shitkickers.

Last election I wholeheartedly blamed CNN and MSNBC for the ascension of Donald Trump. They gave oxygen to what would grow into a roaring bonfire of hate, racism, misogyny, greed and xenophobia. They thought he was good TV: “Grab them by the Pussy!!! Ooooh, what appalling and hateful thing will fatty say next???”

What seemed to especially rankle Trump was Biden telling him he was not smart. This is Trump’s Achilles’ heel. He’s a dumbfuck and he knows it, which is why, for him to be “the smartest guy in the room,” he must search high and low for other dumbfucks. Which explains EVERYONE around him. Even the ones who are merely evil, greedy dumbfucks. Like Miller. Like Barr. Like McConnell. Like Navarro. Then there are just your garden-variety dumbfucks, like Pence. The dipshit blonde woman who is his mouthpiece; McEnany. Or the Crypt Keeper, Conway. If Biden can keep pounding away at how egregiously stupid Trump is, it is a good way to rattle him.

I hope so, because nothing else seems to stick. Not 200,000 COVID-19 fatalities, not Russia putting bounties on American soldiers, not the frightening and worsening state of the environmental health of the planet, not referring to our war dead and veterans as “losers and suckers,” not fucking the government by paying next to NO taxes for the last fifteen years, not his inciting of racial violence and doubling down on demonizing Black Americans and sending out dog-whistle messages to the alt-right armed militias: “stand back and stand by.”

It should be obvious that what Trump has planned is not merely trying to steal the election, but a coup d’état. He plans on taking America by force, if he deems it necessary. He has turned the process into Babel. It should be obvious he’s out of his mind and drunk with power and it isn’t funny. He knows there are no consequences.

Let’s show him different. Let’s vote him out. Vote because your life depends on it. Because it does.

I have NO idea who won the debate last night. Neither do you. It was a Shitshow top-to-bottom.

I only know who lost. The American people.