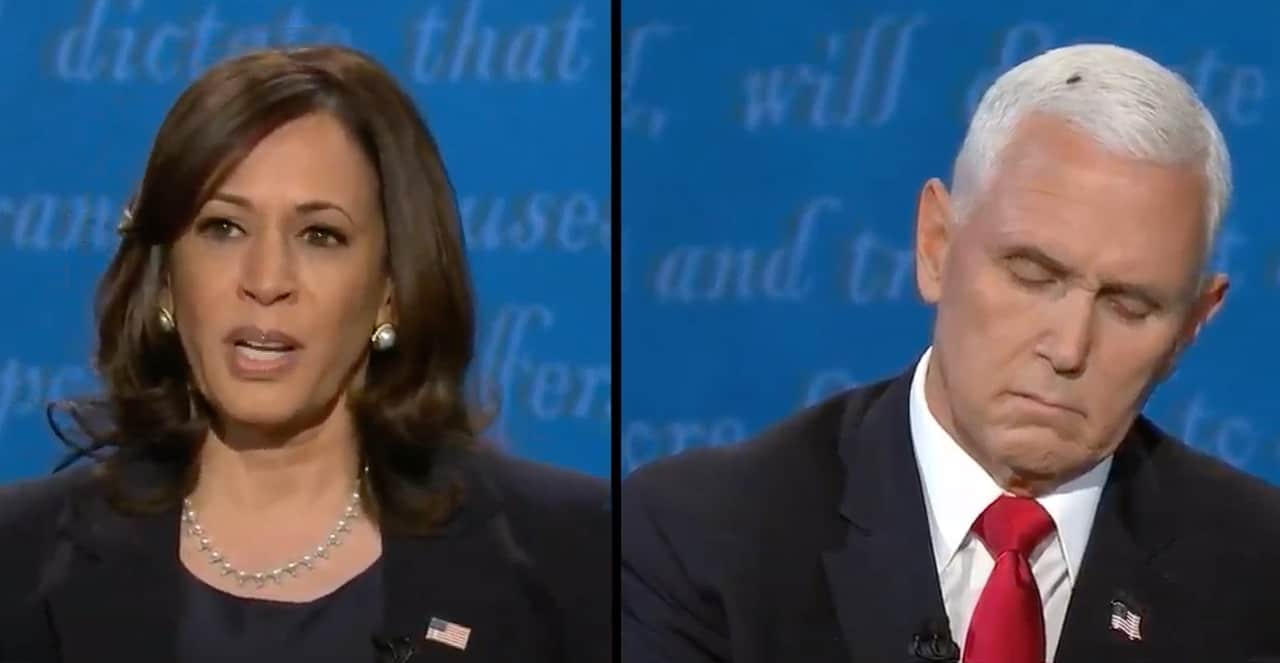 At times the disparity of the mismatch was like watching a lawnmower run over a chipmunk.

Or Rahm Emanuel trying to play one-on-one with LeBron James. It damn near wasn’t fair. Vice President Mike Pence was so outmatched, outthought and outclassed that he, like his boss, sought to gain advantage by running over his allotted time, talking over Senator Harris and trying to get her to take the “anger bait.” She didn’t. She smiled, reminded him that she was speaking and took a tone with him one might take with a senile relative or an especially dim dog.

And then she kicked his ass.

Moderator Susan Page did what she could to rein in his disregard for the rules and, I thought, toward the end asserted herself better, but it’s woefully honest that Mike Pence does not like being corrected by women. Particularly Black women. His tone the whole night was one of “middle-aged white guy mansplaining to these dizzy broads what’s-what.” It is a tone that cost him mightily as far as optics went, especially when the giant fly was trapped on his head for three minutes. Evidently, his coif was so dense with hairspray that the poor little bastard was trapped there for a while. I know what the fly had to be thinking: “Fuck!!! I’m glue-trapped to Mike Fucking Pence—Jesus !!! What a dumb fucking way to die.”

I can only assume the fly found a way to sever its own limb and free himself: thoughts and prayers to the fly.

Kamala opened strong by detailing the White House’s abysmal handling of the COVID-19 pandemic, detailing point-by-point just what it has cost this country, and done to this country. She deftly underlined the Rose Garden clusterfuck that was likely responsible for a dozen or more infections. She caught Pence flat-footed. He went on and on in a robotic Company Man drone about how the event was “outside,” as if that means anything when the crowd was largely mask-less and not observing even the most rudimentary semblance of social distancing. Pence then went on to mouth the company line regarding COVID -19: “The President, Donald J. Trump, and I believe in and trust in the American people to have the good sense to determine what’s best for them.”

I thought, You dumbfuck: 210,000 dead American citizens and this is the best, most nuanced thinking regarding this plague you can think of? “Trust the American people?” Half the assholes won’t wear masks, or take precautions to stop the spread of the plague. Shutdowns and shelter-in-place had to be LEGALLY mandated before the “American People” would act in a self-protective manner. This is 2020 and the most dangerous population on this planet is “The American People,” so intoxicated by the utter mythology of their “liberty” that they’ll think nothing of killing their fellow citizens to avoid wearing a mask.

Watching Pence trot out Trumpism after Trumpism gives one a window into how entirely delusional the whole enterprise is. He practically salivates at the idea of overturning Roe v. Wade and abolishing same-sex marriage. He does not even attempt to veil his idiocy; that Supreme Court Nominee Amy Coney Barrett is a member of “People of Praise” does not trouble anyone within 500 feet of Trump. It should scare the hell out of them. It is a cult-like gaggle of women-hating “Christians” who insist women must be subservient to men in marriage. There is not even a whiff of equality in their ethos.

Harris then went on to detail how Trump’s own physicians lied when detailing his case of COVID-19 and she point-by-point reiterated how manifestly dangerous his behavior has been since then, starting with the asshole taking a spin around the parking lot potentially exposing his Secret Service detail, and continuing with him removing his mask to demonstrate what a big, hard guy he is. To insist he feels good and has benefited from medical care—available only to him—that he thinks of as a “cure.” One cannot stress enough how blindly arrogant and dangerous these verbal nuggets of “fool’s gold” are. We are still in the middle of an aggressive pandemic that kills more and more people every day and the best medical and scientific minds agree that we are a long way from anything like a cure. We’ve only arrived at possible treatments.

Harris also underlined the troubling amount of debt that Trump is in and how he has used the Russians like an ATM, taking money from oligarchs since the eighties, in exchange for what? The fact that Trump paid $750 in taxes in each of two of the last ten years and none in the others. All while claiming to be a billionaire. Pence mouthed the company line that Trump has paid millions upon millions of dollars in taxes “over the years.” Which years, Q-Tip?

Harris literally laughed at his ass when he suggested the best thing for our environmental woes is “the free-market economy” …what??? At this point Pence had shit the bed. She knew it. He knew it. And nobody would tell him about the fly on his head.

Harris then administered the coup de grace. She brought up the 300,000 manufacturing jobs lost under Trump and Pence. So much for the “Trump Economy.” She also brought up the tax breaks that the wealthiest one percent of our country got, enabling them to profit monstrously while working Americans suffered through a pandemic and a shutdown that scientists agree was, in all probability, avoidable had we listened to science and the CDC from day one.

She also hammered Pence with Trump’s disgraceful and despicable description of our veterans and men and women who died in defense of our country as “losers and suckers.”

At this point Pence started to babble about how a victim of ISIS was Obama’s fault and, by proxy, Biden’s. It was bullshit but what is a Trump lackey to do when a strong woman is kicking his ass around the block? Blame Obama!

Pence tried to stress the law-and-order company line accusing Harris of being part of “Biden’s socialist plan to defund the police”—he also mentioned a bill sponsored by Alexandria Ocasio-Cortez that Harris had signed on. That one thing was not related to the other, never mind, the genius Mike Pence just wanted to invoke AOC and Senator Harris in the same sentence. It backfired.

Kamala Harris was considered a tough law-and-order prosecutor in California, so much so that many on the left distrusted her in the beginning. Again, at the suggestion she is part of some wide “socialist conspiracy,” Harris merely laughed at him and smiled. As if talking to a backward child.

At about eighty minutes in, I looked through my notes and realized Pence had not answered ONE question he’d been asked. He was especially cagey regarding a question about the peaceful transfer of power when they lose. He didn’t have an answer. He also didn’t realize it is a likely inevitability. He just trotted out the company line. It’s obvious Trump does not trust him to carry the ball as far as any REAL plans or, what passes for ideas, goes. A good guess is there is no plan. There are no ideas.

Part of the overwhelming sadness of the last four years is the poverty of the imagination, the absence of an ideology for Americans to embrace. The Trump years have been a Ponzi scheme for the aggrandizement and greed of one man: Trump. Mike Pence has faithfully carried his foul water, like all good company men do. Fuck you, Company Man.