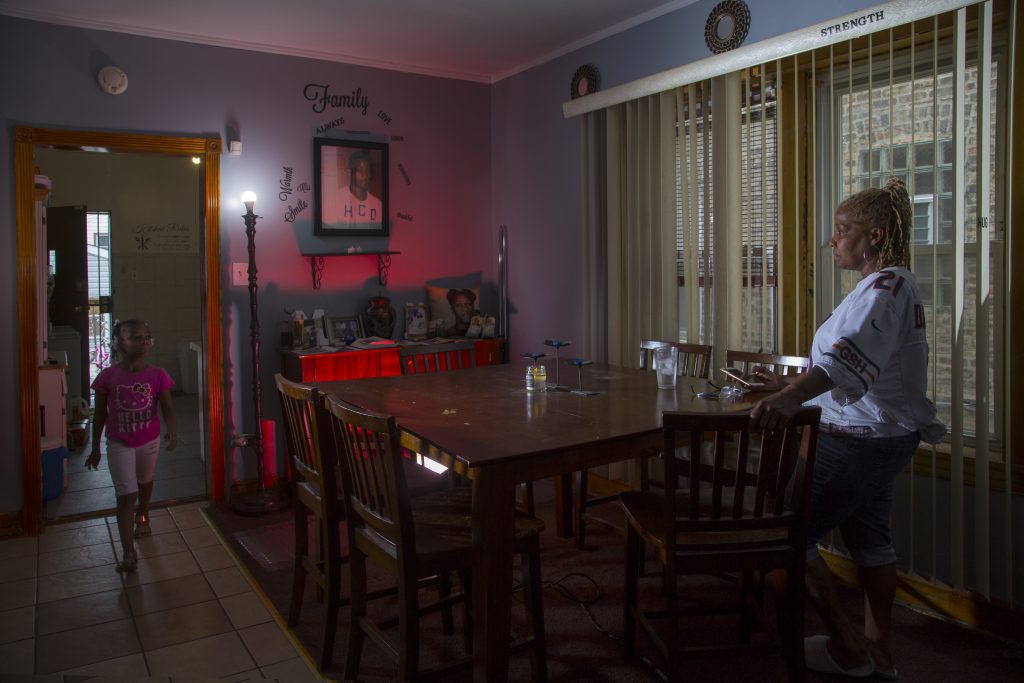 I have long held the impression that Chicago overstates its debt to work and machines, while giving short shrift to love and music. Perhaps I have held this belief since the Dawn of the Age of Gentrification. I’ll date that market bulldozing rendering of urban space around here to sometime between the razing of the Henry Horner projects and the old Chicago Stadium on the “Near” West Side and the re-wrapping of Lake Shore Drive around the front side of Soldier Field, to the reopening of vehicular traffic to State Street, that Great Street, as it coursed through the Loop up high, at least since then.

To wit, my mother’s brother’s mother-in-law passed away here in the Chi-town, Illinois during the late summer of 2020. Midway through these times of COVID shelter, bronze statue-razing and Twitter-triggered smolder. This is the American-born side of my family, for those wondering the name. My mother and her brother George were born here in Chicago; South Side Catholic kids from back in the days of doo-wop, bobby socks, suspenders and color-coded human flight. From this bitter Earth, as Dinah Washington sang it so.

My mother’s sole brother George graduated De La Salle High School, a true Meteor before his time, Class of 1961. The year after Richard Daley fils, he who was responsible for sending the mighty rigs to lift Lake Shore Drive from aforesaid earth and re-plant its path heretofore. George the Meteor finished top three in his class and went on to our shared collegiate alma mater, the University of Illinois at Urbana-Champaign. Along his way, young George married into a family settled in South Lawndale. My beloved American-born maternal grandmother just called it “The West Side, Over There.”

The matriarch of that family Over There was known as Mother Henry. A woman of love and family and food and gospel and the baptist God. An aficionado of uplift on that electric blues part of town. How do I explain the sound of the word “baby” from Mother Henry’s lips? Beyond soothing, made you feel like a newborn, all fresh and reborn. Mother Henry could cook, too, baby, fix a plate like few others. She spent a literal centennial on this bitter earth, most of it in this Home as Sweet as they sing it to be. Saw it all. To paraphrase the preacher’s eulogy at Mother Henry’s funeral, the Will of Whatever Gods may be done, in Alpha to Omega.

She was born in the middle of the 1919 influenza outbreak, right at the close of what they call the “Red Summer” of Race Riots, a prelude to harvest time; not even a full year post-armistice to settle the Great War. As a child, she lived through the Roaring Jazz Age and the St. Valentine’s Day Massacre and Prohibition (she would have been a leading teetotaler, if they called women of her Delta soul skin such righteous names). Mother Henry saw her brothers and her husband Joe and such Invisible Men off to fight in WWII and Korea, to save the world of some other men. She came up here to Chicago midway through the Great Migration—just as First Wave became Second, as per the take of her fellow centenarian, the great Timuel Black. I think she arrived in Chicago before Martin Kennelly and Boss Daley and the New Deal machine ground through the middle of my Grandma’s South Side, bent and curved around the Loop to fashion a path through toward the north and west. I have no idea how Mother Henry and them made it Over There before the bosses and the machines paved the Dan Ryan.

From afar, she heard of the dead Kennedys and a slain King, Minister X and Chairman Fred. Pop-pop-pop-pop-pop went cold steel echoing the Amphitheatre. Man-made munitions splaying magic bullets, dispatching of mythic heroes. She would have been about my current age, forty-nine, in 1968.

Nam and Watergate she made it through, too. Son-in-law George served in the National Guard during that police action, just like Bush 43. No spur deferment, but a conscription allowance, in the terms of the times. Afforded for an only son engaged in critical studies. Civil Engineering in Champaign back in those days? Critical. A “Black man?” as my father would have said upon meeting him, heavy Yoruba tongue clicking, mind all agog at the peculiarities in this country of his arrival. A nigh invisible boy? I-L-L-. Mother Henry made plates for all of them as they combated “the Menace” between their studies at the Armory off of old Parkway Boulevard, right before that became the Reverend Doctor King’s Drive. And she likely said a prayer for Tricky Dick Nixon as he waved two-fisted peace signs from that helipad beyond the Rose Garden, baby.

The end of colonial empires; fall of the Warsaw Pact; redrawing of the Balkan map; East Africa and the Levant; the administrations of both Rich Daleys; Mayor Harold. She outlived Prince, Mike Jackson, Whitney, Luther, James Brown the Godfather of Soul, Phyllis. Not to mention Billie, Nina, Mahalia, Bobby Womack, Nat, Dinah, Lou Rawls, Pops Staples and Curtis Mayfield, all of whom knew God and muses in their sacred and profane ways. 9/11 and two rich Bushes? P-lease. Mother Henry made it through both terms of the administration of a man who worked the Gardens out south named Barack. I often imagine the Louisiana Hot Five dance my own grandmother would have kicked up had she lived long enough to see that guy elected president. A Black man? In this country? From this city? How do you say “Sweet Home” in Yoruba? Mother Henry would have called the country’s forty-fourth president “baby” to his grinning face, for certain.

Mother Henry almost made it through the 45 experience (with a lower case “e,” unlike Jimi’s query. Let’s just call it that and leave it be). Almost. Only to succumb in the times of COVID shelter, distanced from those whom she fed and so loved? I think not. No submission to a disease nor to its pathology in that woman. Just time. She lived long and prospered, indeed, by the Grace of her God, and she lives on.

I imagine that she is in a room without time or walls, checking up on my grandmother and my father, and the son-in-laws Meteor George and Oscar Parker, her husband Joe, and all the great souls gone long before now on through these days. The Panthers, Coach JT, Landon “Sonny” Cox, all sitting around, listening to sacred, happy, blue gospel tunes singing their Muddy truths. She’ll wait ‘til the ditty plays through on the Good Lord’s record player and only then, she’ll ask each of the folk, “Can I fix you a plate, baby?”