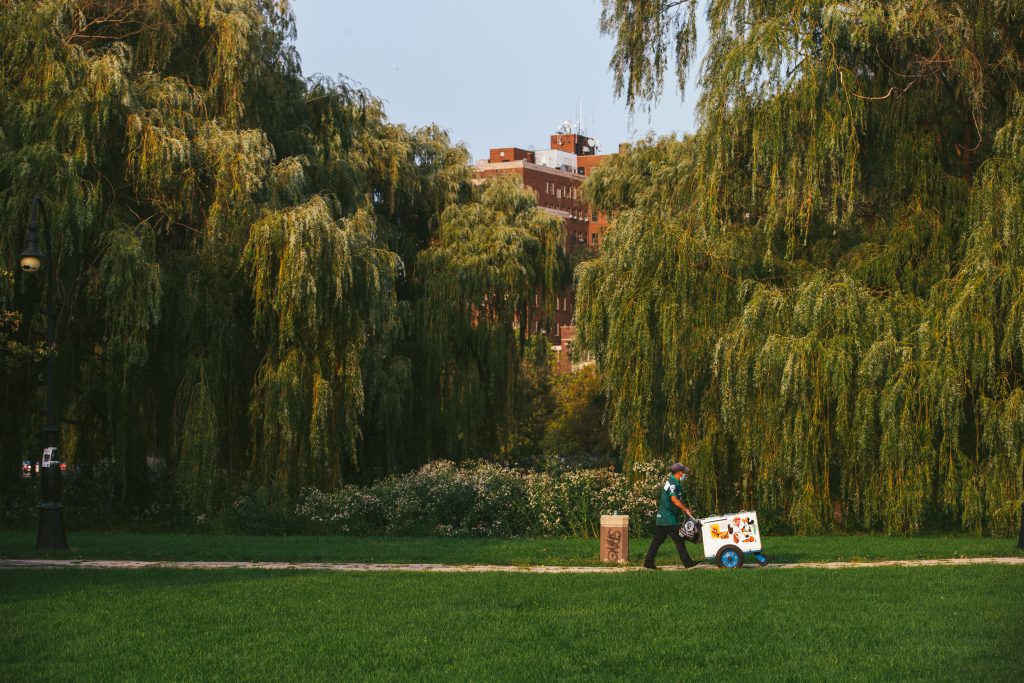 One bitter irony of real estate development, it is often said, is the convention of naming places for what they aren’t. Every office park named for a creek is a concrete desert; every subdivision with a hill in its name is flat. Even among this inglorious company Jackson Park stands out for its perversity. President Andrew Jackson’s legacy—defense of slavery, hostility to abolitionism, violent removal of indigenous tribes—is the exact opposite of the ideals that the park, once known as Lake Park, was designed to demonstrate. And yet it is also a smirking, swaggering irony, for Jackson Park today is no more a tribute to Jackson than a monumental middle finger.

Jackson Park’s six-hundred acres are a succession of episodes unfolding along a North-South axis, along the Lake Michigan shoreline. The topography subtly shifts, as does the mood. A lyrical pond near the Museum of Science and Industry, then meandering paths of the Japanese Garden. Patches of dense wilderness, then level soccer pitches. Lagoons filled with calm water, then crowded beaches. Frederick Law Olmsted, who designed Jackson Park in the decade following the Civil War, was convinced by his travels across slave states that the fate of democracy depended on whether white people and Black people could share physical and social space. Olmsted’s landscapes intended to be, quite literally, the common ground of the American experiment. An abolitionist idea; then—or, at any rate, soon—a center dedicated to America’s first Black president.

Could Olmsted have predicted that, a century after he sited the White City there, Jackson Park would become Black space? “I’m a romantic,” Elbert Phillips says. Phillips curates DJ sets with precision, craft. In Chicago’s House music culture, he is known for mixing the unexpected. “When I get to 57th Street, when I make that right turn, I might hear music. It’s sunny. I’m anticipating that pleasant energy.” Phillips walks to the park, or cycles there. “Last week, there was an all-female lineup. These girls, some of them were into rare grooves. I heard some things I haven’t heard before; I heard a punk rock song.”

Black music. Black wellness. Black love. A Black walking group. A boat club with regattas led by a Black commodore. A longstanding Pan-African Soccer Tournament, its diasporic players and coaches all Black. Black yogis and joggers. Black families, picnicking in the sun. At night, Black men meet other Black men in a park known for its Down Low appeal.

James Baldwin rode “through dark, murmuring—and, at this hour, strangely beautiful—Chicago, along the lake” after he left Elijah Muhammad’s house in Kenwood. “We returned to the discussion of the land. How were we—Negroes—to get this land?” As Confederate rebels mustered, Olmsted marked a rectangle of Manhattan for the country’s first public park, a proposal centered on a radical notion. Before he became America’s first parks designer, Olmsted journeyed through the South, recording encounters with a land and people that were alien, unimaginably brutal. He came to the South to write dispassionate dispatches for a newspaper; he returned an anti-slavery zealot. Central Park was an argument, made spatially, for common ownership and racial belonging. Olmsted scholar Garrett Dash Nelson has written that Olmsted’s parks are important “not merely for what they look like, but because of whom they belong to.” Yet in order to acquire the land that would become Central Park, a thriving African American cluster—Seneca Village, where homeownership rates exceeded fifty percent—was destroyed. Baldwin might have also asked about how this land, once gotten, is to be kept.

But Jackson Park is more landfill than land, a miracle of landscape architecture and manure. In a swampy hinterland, well beyond Chicago city limits, Olmsted built a sturdy breakwater, shipped in 200,000 cubic feet of dirt, and topped it with a layer of fertile manure sourced from nearby stockyards. Jackson Park was to become the centerpiece of the World’s Columbian Exposition of 1893. Its two-hundred buildings, molded of horsehair and plaster, greeted throngs of visitors. Only one remains in Jackson Park, repurposed as the Museum of Science and Industry. “As a Sunday ritual we walked to MSI,” Michelle Boone recalls. From the southern edge of Jackson Park, where her grandmother lived, Boone and her family walked nearly three miles, their lunches packed for a day at the museum. “It was a safe space,” she says, “and free.”

From the beginning of the Great Migration until Boone’s childhood, the share of Chicago’s Black residents grew from two percent to a third of the population. Most were confined to the Black Belt, a string of neighborhoods on the South Side. Excluded from most of the city by housing covenants, new arrivals found overcrowded apartments and streets. Jackson Park’s open spaces offered the promise of relief but access to them proved hard-won. Parks were sites of racial conflict until they were, as historian Brian McCammack puts it, “conceded” by white residents and transformed into de facto segregated Black space. Like other families in the Black Belt, Boone’s made Jackson Park a touchstone of social life and kinship. At annual family reunions three decades strong, “patriarchs would grill all the meats, set up a boombox, a couple of coolers, and games for kids.” Her sister was married in the Japanese Garden. Boone, who served as the city’s cultural commissioner and now oversees public programming at Navy Pier, still knows her way around the park’s tree-lined paths. “It’s a constant presence in my life,” she says.

On Wooded Island, a Burr Oak remains from the White City. In his plan for Jackson Park, Olmsted envisioned a mix of wild, forested areas interspersed with sunlit open spaces. Since 1990, Jackson Park has hosted the Chosen Few Old School Reunion Picnic, an event that is to House music what the U.S. Open is to tennis, except that at the Picnic, everyone is on the court. A genre created by Chicago’s African American DJs and producers, House music is in its full expression during a weekend in July when crowds celebrate at no fewer than 120 beats per minute. There are tents, coolers, kites. There is flirting, costumes, hugs. People dance in a clearing, surrounded by northern white oak, smooth blue American aster and pin oak, which Olmsted planted for shade. A site of Black creativity, love, and joy. In urbanist-speak, it’s a “heterotopia,” a place that exists outside of white-dominated spatial imagination. “Downtown is not concerned with us,” Phillips, the DJ, says. Over the treeline, its towers are barely visible in the distance.