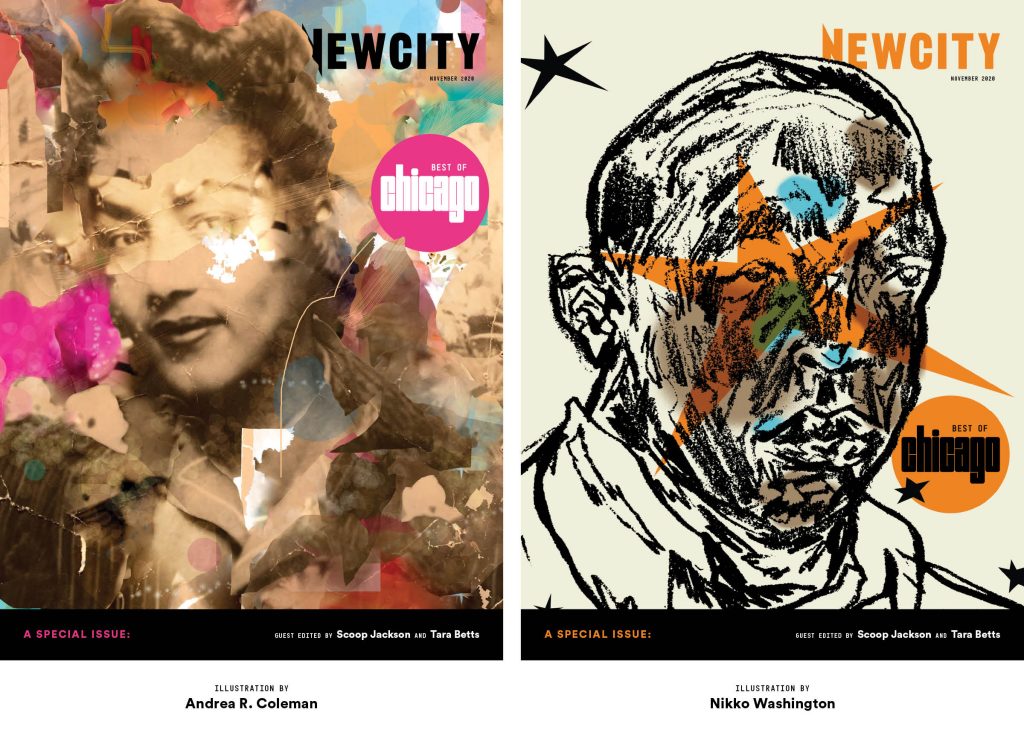 We are looking at Chicago long after Jean Baptiste DuSable witnessed this land, long after the Great Migration fanned out from train stations to Chicago’s South and West Sides, and almost a century after Robert Johnson’s rendition of “Sweet Home Chicago” became a citywide anthem played on televised events to celebrate this city’s rich cultural and historic heritage, long after the 1919 Red Summer that set the uncomfortable stage for the city’s racial divide and dynamics that, to this day, still exist. Newcity approached us to co-edit a landmark Best of “Our” Chicago issue that isn’t just about declaring a Black “Who’s Who” listing that celebrates who’s the hottest, best, most popular and where you should spend your money.

We wanted to assemble a Best of Chicago issue that celebrates some of the people, places, creative landmarks, food and history threaded through the cloth of the entire city interwoven by a Black Chicago fabric. Imagine trying to pull that thread out of the city. You can’t. Everything that makes it robust, vibrant and memorable depends on that thread, but if you took it out, Chicago wouldn’t be that rich, vibrant weave. It would be a jumbled mess of material, sitting there. Accomplishing nothing. Instead, Chicago is a city that always feels like home, even with its segregation, its neighborhoods that unfold around CTA color-coordinated lines and roll through surrounding suburbs, and its yawning absence of Black communities in its mainstream media.

For this issue, we wanted to address that absence. We wanted not only to be more than a promotional moment and dodge the positioning of acting as a tastemaker. We wanted to talk about how the city is the residence and birthplace for so many places and people that never made the Newcity lists before, but also we wanted to use this space to talk about how Chicago ain’t Chicago without the places and people you only know if you know.

With that said, this is not a comprehensive, tell-all Best of Chicago guide to Black Chicago. It is only a beginning. We would’ve loved to do more. (And we will.) We would have loved to include more firsts, more surprises, more leaders. We wanted to include more of what’s on the West Side, more people who function in the shadows, more unsung heroes, more businesses shaping change. (And we will!) What we did cover represents the soul of this city, which led to amazing contributions from Black writers, photographers and artists across the city. There are names that you might expect, of course, like Eve Ewing, Noname, Theaster Gates, Lena Waithe, Eric Williams of The Silver Room and Ayana Contreras. There are longer features by Isaac Perry, Bryan Crawford, Raymond Alexander, F. Philip Barash and Bayo Ojikutu, as well as Frank Tempone’s profile of author and radio journalist Natalie Y. Moore. There are lots of places to see and people to know better in this issue, but we also want to extend the affirmations with a “We See You” section. Whenever you tell someone “I see you,” it’s that head nod, that greeting that acknowledges you without a word, a quiet affirmation, a li’l bit of love.

As the city creeps through the ongoing pandemic, continued protests and the pending elections, we finally hear people who’ve never before acknowledged police brutality finally talking about #BlackLivesMatter, Black businesses, universal health care, and #DefundThePolice. We wanted to celebrate the activists, old and new, places and people who are connected to this concrete—working, thriving, and adding to the shimmer and snap of the bright bolt of cloth unfurled along Lake Michigan, stitching itself into that name expelled from DuSable’s lips so long ago, of the sweet home he discovered—Chicago.

TARA BETTS is the author of “Break the Habit” and “Arc & Hue” in addition to her role as lit editor of Newcity. Her interviews and features have appeared in publications such as Sixty Inches From Center, NYLON, The Source, Poetry magazine, Hello Giggles and Mosaic Magazine.

SCOOP JACKSON  is a lifelong South Sider who has contributed to Newcity for more than two decades. He’s been part of ESPN since March 2005, as a writer for its print and digital properties, as well as a regular guest on the sports network’s TV and radio shows. His most recent book, “The Game is Not a Game: The Power, Protest and Politics of American Sport,” was published earlier this year.