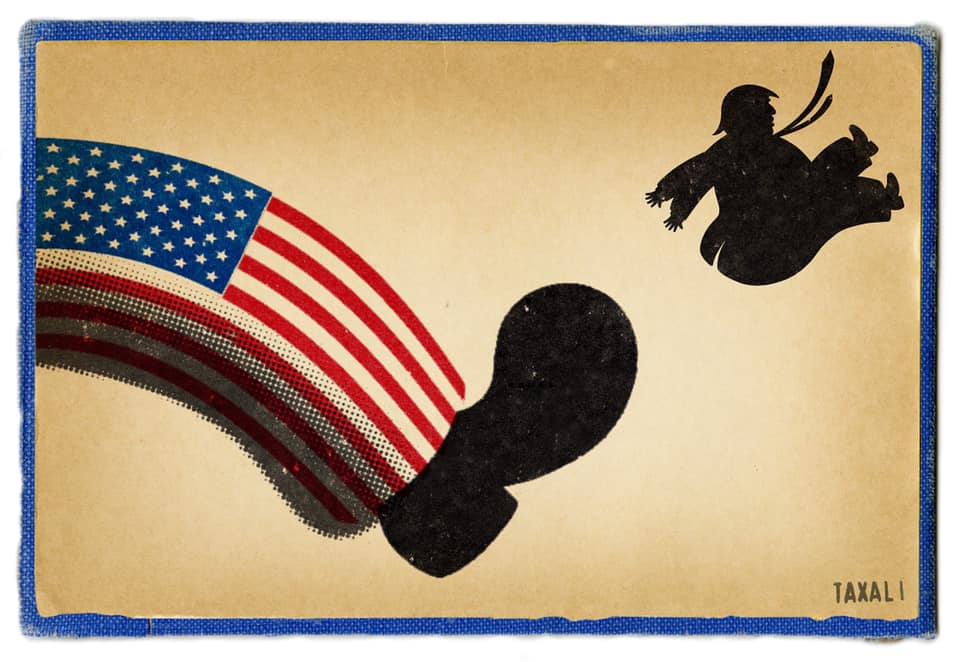 Joe Biden will be the forty-sixth president of the United States. Everywhere I looked on this beautiful, balmy Indian summer Saturday, people were celebrating; peals of joy and happiness rang out everywhere in our city. I don’t think I’ve ever been more proud of Americans. From Brooklyn to Berkeley, people were out dancing in the street, smiling, hugging and buzzing along to pop-up dance parties. I heard somebody say, “It’s like a war was over,” and this is precisely it. For four years, this bloated gasbag went to war with every notion of decency, equitability and human kindness in favor of enriching he and his friends, while exploiting Black, Muslim and immigrant Americans. He so cheapened the American discourse that we now find ourselves divided and polarized in a truly tragic way. Luckily, we were not so polarized that we could not recognize the essential decency of Joe Biden and Kamala Harris. They ran a substantive campaign merely by illuminating policy, and being the diametric opposite of Trump. They outflanked him by setting a serious example of actual competence.

This is a red-letter day in America. Flushed along with him, the revolving cast of mental and moral defectives: Pence, Barr, Giuiliani, his two moron sons Beavis and Butthead, Ivanka and Jared, Stephen Miller, Kellyanne Conway—the Cryptkeeper—and a whole host of fuckheads. Gone. Some of them will, no doubt, write tell-alls, though I doubt it will be Don Jr. or his idiot brother Eric. They strike me as a chip off the old sludge in that neither one of those nitwits could write a grocery list.

Trump will continue to piss and moan that he was robbed, that he was cheated, that the election was “stolen” from him, but because there is no credible evidence, he will be ignored. His own party as well as Fox News has already turned on him and as soon as his fat ass takes one step onto Pennsylvania Avenue on January 21, I believe the Southern District of Manhattan would like a word. In short, what goes around comes around. One has the feeling the karma boomerang just hit him in the sack—hard. Mike Pence and “Mother” will go back to Indiana where he’ll probably resume his career as a right-wing radio blabbermouth who can put you to sleep inside of three minutes. One has to believe that Dan Quayle has had a sigh of relief that HE is no longer the biggest asshole to ever come out of the Hoosier state.

We will, no doubt, hear of other horror stories of the Trump White House. I see a whole list of bestsellers coming out of this cabal of monsters—all enablers, all culpable, and a whole bunch of them criminal. This was the looting of the U.S. government. When we get a better look at all of the “deals,” we are sure to find the president enriched himself and his friends at the expense of the American people. He’s never been other than a snake-oil salesman and a bully and an absolutely for-shit businessman. When he took office he was involved in more than 2,000 cases of litigation, mostly for non-payment. Here in Chicago, creditors had to forgive over $290 million in debt over Trump Tower. His whole wretched career, he was and is a deadbeat, a loser who was born on third base and thought he hit a triple. And now he is DONE. Stick a fork in his fat ass.

What comes next is pretty simple: exhale, be calm, and pay no attention to the Sturm und Drang that Trump and his creatures will try to make of this. They will file specious and frivolous motions and lawsuits and it will change nothing. He lost: the American people have spoken and he lost. He lost. He lost… I just like saying it.

Now we have a new day in America. We have work to do. Freedom demands participation. A better, more equitable, less racist, more honest and compassionate country will require we the people. Reach out to your neighbors, lend a hand and even though we must wear masks, smile at them and give them a nod. Seventy-five million of us did the right thing. We repelled a monster.

Celebrate our new president and our new vice president, the first woman of color and woman to become vice president. That she can walk out to Mary J. Blige informs us she has swag for miles as well as a formidable and restless intellect. Celebrate these days: We chose the right ones.

And everywhere in my city, freedom rang.