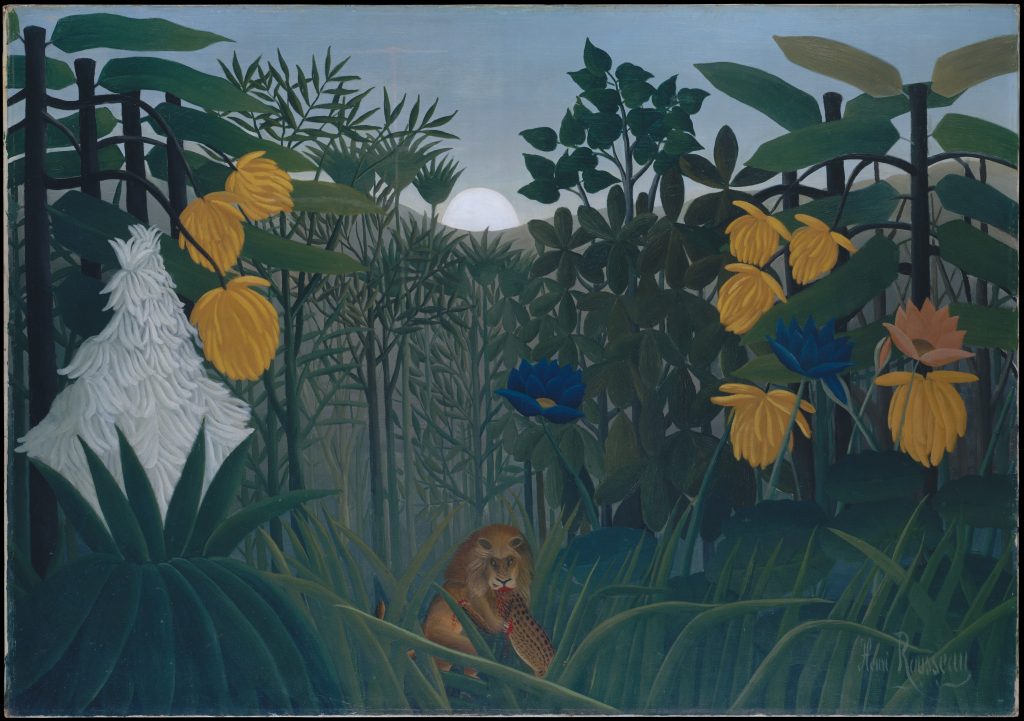 “The Repast of the Lion,” Henri Rousseau/courtesy The Metropolitan Museum of Art.

ARIES (March 21-April 19): “Love can’t always do work,” wrote novelist Iris Murdoch. “Sometimes it just has to look into the darkness.” From what I can tell, you’ve been doing that recently: looking into the darkness for love’s sake. That’s a good thing! You have been the beneficiary of the blessings that come through the contemplation of mysteries and enigmas. You’ve been recalibrating your capacity to feel love and tenderness in the midst of uncertainty. I suspect that it will soon be time to shift course, however. You’re almost ready to engage in the intimate work that has been made possible by your time looking into the darkness.

TAURUS (April 20-May 20): Author Barbara Kingsolver says, “Don’t try to figure out what other people want to hear from you; figure out what you have to say.” That’s always valuable advice, but it’ll be especially useful to keep in mind during the coming weeks. You’re probably going to feel more pressure than usual to tell others what they wish you would tell them; you may experience some guilt or worry about being different from their expectations of you. Here’s the good news: I’m pretty certain you can be true to yourself without seeming like a jerk to anyone or damaging your long-term interests. So you might as well say and do exactly what’s real and genuine.

GEMINI (May 21-June 20): “The violets in the mountains have broken the rocks,” wrote playwright Tennessee Williams. I think that’s a poetic but accurate description of the feat you’ve been working on lately, Gemini. You’re gently smashing through stony obstructions. You’ve been calling on your irrepressible will to enjoy life as you have outsmarted the rugged, jagged difficulties. You’re relying on beauty and love to power your efforts to escape a seemingly no-win situation. Congratulations! Keep up the good work!

CANCER (June 21-July 22): Cancerian rapper Vince Staples says, “I feel like it’s impossible to be completely yourself.” Why? Because ideally we’re always outgrowing who we have become; we’re moving beyond the successes we have already achieved. There is no final, whole, ideal “self” to inhabit and express—only more and more of our selfness to create.  Staples suggests we’d get bored if we reached a mythical point where we had figured out exactly who we are and embodied it with utter purity. We always have a mandate to transform into a new version of our mystery. Sounds like fun! Everything I just said, Cancerian, is an empowering meditation for you right now.

LEO (July 23-Aug. 22): “I am my own sanctuary and I can be reborn as many times as I choose throughout my life.” Singer-songwriter Lady Gaga said that, and now I offer it to you to use as your motto. According to my analysis of the astrological omens, it’s a fabulous time to be your own sanctuary. I invite you to rebirth yourself at least twice between now and the end of November. What’s the first step you’ll take to get started?

VIRGO (Aug. 23-Sept. 22): The National Football League is a giant socialist enterprise. It earns billions of dollars of revenue, and shares it equally with each of its thirty-two teams. So the team in Green Bay, Wisconsin, population 105,000, receives the same payout as the team in Chicago, population 2.7 million. I advocate a comparable approach for you in the coming weeks. Just for now, distribute your blessings and attention and favors as evenly as possible, showing no favoritism toward a particular child or friend or pet or loved one or influence. Be an impartial observer, as well. Try to restrain biases and preferential treatment as you act with even-handed fair-mindedness. Don’t worry: You can eventually go back to being a subjective partisan if you want. For the foreseeable future, your well-being requires cordial neutrality.

SCORPIO (Oct. 23-Nov. 21): “I hold a beast, an angel and a madman in me,” wrote Scorpio poet Dylan Thomas (1914–1953) in a letter to a friend. That sounds like a lot of energy to manage! And he didn’t always do a good job at it—although he did at times tap into his primal wellspring to create some interesting poetry. I’m going to use Thomas’ words in your horoscope, because I think that in the coming weeks you can be a subtle, refined and mature blend of a beast, angel and madperson. Be your wisest wild self, dear Scorpio!

SAGITTARIUS (Nov. 22-Dec. 21): Activist and author Rebecca Solnit writes, “The grounds of my hope have always been that history is wilder than our imagination of it and that the unexpected shows up far more regularly than we ever dream.” In my astrological estimation, her grounds for hope should also be yours in the coming weeks. The future is more wide-open than you might think. The apparent limitations of the past are at least temporarily suspended and irrelevant. Your fate is purged of some of your old conditioning and the inertia of tradition. I encourage you to make a break for freedom. Head in the direction of the Beautiful Unknown.

CAPRICORN (Dec. 22-Jan. 19): The famous Leaning Tower of Pisa doesn’t stand straight, but tilts at an angle. Why? The soil it was built on is soft on one side. So the marble-and-limestone structure began to tip even before it was finished. That’s the weird news. The good news is that the tower has remained standing for more than eight centuries—and has stayed intact even though four major earthquakes have rolled through the area. Why? A research team of engineers determined it’s because of the soft foundation soil, which prevents the tower from resonating violently with the temblors. So the very factor that makes it odd is what keeps it strong. Is there a comparable phenomenon in your life? I believe there is. Now is a good time to acknowledge this blessing—and enhance your use of it.

AQUARIUS (Jan. 20-Feb. 18): Even if you tend to pay more attention to what’s going wrong than what’s going right, I ask you to change your attitude for the next three weeks. Even if you believe that cynicism is an intelligent perspective and a positive attitude is a wasteful indulgence, I encourage you to suspend those beliefs. As an experiment—and in accordance with astrological potentials—I invite you to adopt the words of activist Helen Keller as your keynote: “Every optimist moves along with progress and hastens it, while every pessimist would keep the world at a standstill. The consequence of pessimism in the life of a nation is the same as in the life of the individual. Pessimism kills the instinct that urges people to struggle against poverty, ignorance and crime, and dries up all the fountains of joy in the world.”

PISCES (Feb. 19-March 20): Researchers in the UK found that sixty-two percent of the adult population brags that they’ve read classic books that they have not in fact read. Why? Mostly to impress others. George Orwell’s “1984” is the top-rated book for fake claims, followed by Tolstoy’s “War and Peace,” James Joyce’s “Ulysses,” and the Bible. I hope you won’t engage in anything like that type of behavior during the weeks ahead. In my opinion, it’s even more crucial than usual for you to be honest and authentic about who you are and what you do. Lying about it might seem to be to your advantage in the short run, but I guarantee it won’t be.

Homework: What’s the one thing you have never said to your best friend that you really should say? FreeWillAstrology.com