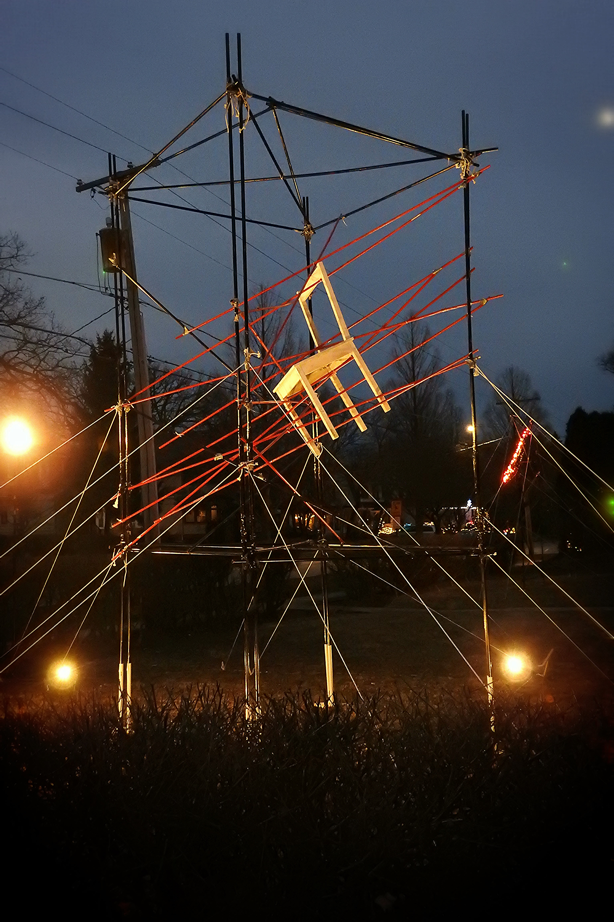 Better than a garden gnome?

Highland Park artist does not need to wait for an institutional commission to get his art out in the world: he simply puts it in the front yard of his home at 340 Temple Avenue, which he’s been doing for five years. This year’s project, entitled “Sheltered,” is pictured above. What kind of reaction does he get from visitors and neighbors? “Very positive,” he says. “Some people cry when they see it.” And the ultimate endorsement from his UPS driver: ” ‘I am not sure what it is but it is Badass’.”

Abloh is blowing up

Chicago-based (half the time) Louis Vuitton menswear artistic director Virgil Abloh launched his new collection the day after the inauguration and it is THE conversation. Vogue has a seventy-piece slideshow and an essay about the work’s impact:

“Abloh has mustered an educational encyclopedia of answers to the ineluctable questions that have been troubling all designers: over the point of fashion, of shows, of making clothes in the face of the Black Lives Matter movement and all the crises that blew up in humanity’s face last year.”

Bookends & Beginnings, the Evanston indie based in a charming alley space, is adding a second storefront when it opens its gifts and stationery boutique at 1716 Sherman Avenue on Saturday, January 23. In addition to the expected fare of stationery, tchotchkes and notecards, the store promises “many ‘local color’ items, such as ‘Evanstonopoly,’ books about Evanston and Chicago, and locally crafted jewelry.”

The late international gospel legend who lived in Chicago most of her life is going to have a renaissance, with the Lifetime biopic “Mahalia” (trailer above) plus at least one more film in the works about her life. Both star Danielle Brooks as the “Queen of Gospel” according to Shadow & Act.

A way around the Cuban embargo

World-music venue Hothouse has been grappling with the vagaries of US foreign policy for most of its thirty-four years. This year, the pandemic created an opportunity to get ahead of the expected Biden administration relaxation of his predecessor’s return of the Cuban embargo by presenting “Hothouse Meets Havana,” a virtual music festival featuring an exchange of artists between the island nation and Chicago. The festival started yesterday and continues through January 24. Details and lineup here.

No backlash at these awards

While the Grammys face a backlash for being tone-deaf in a year of racial reckoning, the 39th Annual Chicago Music Awards, produced by Ephraim Martin, are probably NOT going to suffer a similar fate, with best African, Latin and Asian entertainers interspersed among the usual, and not usual—five DJ categories—awards. Common, Kanye West and Joanie Pallatto are slated for special awards. You can vote and find out how to attend here.

Diversity means more than a hire

“The new generation of executives are coming in with a range of titles — the Hammer Museum in Los Angeles hired Russell Davis as “chief of human resources, equity and engagement”; the Art Institute of Chicago is searching for a “senior vice president of people and culture” — but they have a broad mandate that ranges from recruiting more trustees of color to changing the internal culture.”