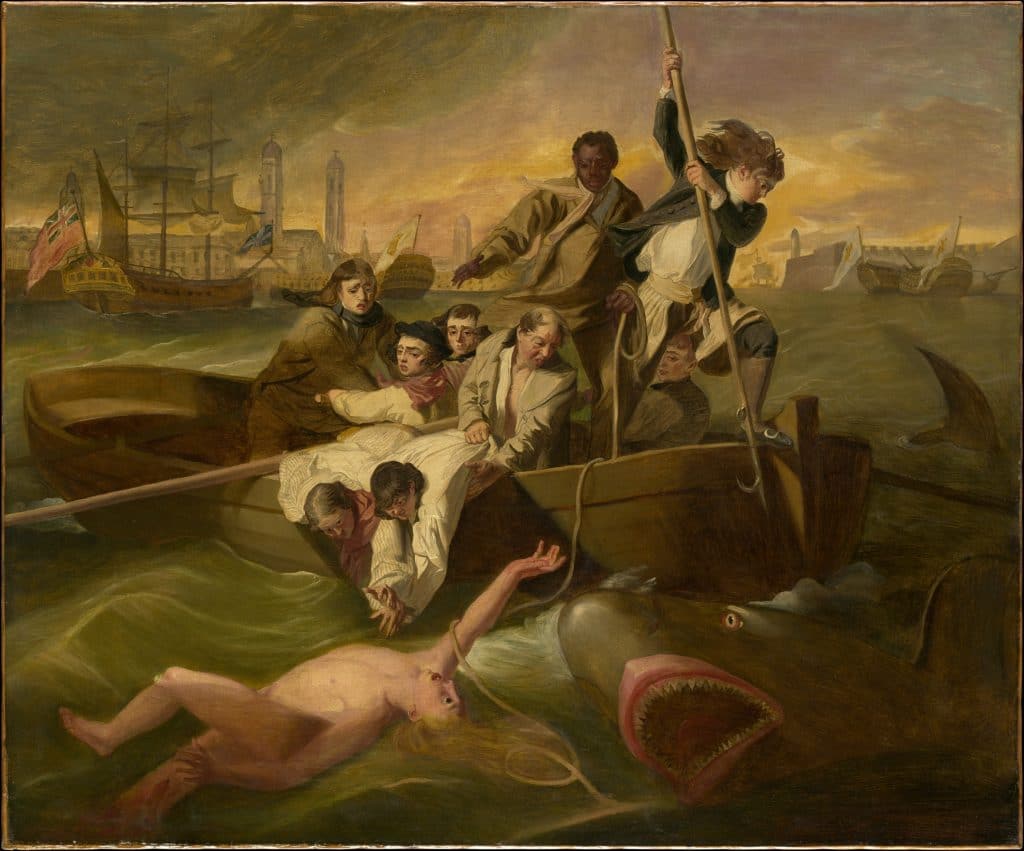 “Watson and the Shark,” John Singleton Copley/courtesy The Metropolitan Museum of Art

ARIES (March 21-April 19): Atheists like to confront religious people with accusations like this: “If God is so good, why does he allow suffering in the world?” Their simplistic, childish idea of God as some sort of Moral Policeman is ignorant of the lush range of ruminations about the Divine as offered down through the ages by poets, novelists, philosophers and theologians. For example, poet Stéphane Mallarmé wrote, “Spirit cares for nothing except universal musicality.” He suggested that the Supreme Intelligence is an artist making music and telling stories. And as you know, music and stories include all human adventures, not just the happy stuff. I bring these thoughts to your attention, Aries, because the coming weeks will be a favorable time to honor and celebrate the marvelously rich stories of your own life—and to feel gratitude for the full range of experience with which they have blessed you. PS: Now is also a favorable phase to rethink and reconfigure your answers to the Big Questions.

TAURUS (April 20-May 20): Blogger Rachel C. Lewis confides, “I love being horribly straightforward. I love sending reckless text messages and telling people I love them and telling people they are absolutely magical humans and I cannot believe they really exist. I love saying, ‘Kiss me harder,’ and ‘You’re a good person,’ and, ‘You brighten my day.'” What would your unique version of Lewis’ forthrightness be like, Taurus? What brazen praise would you offer? What declarations of affection and care would you unleash? What naked confessions might you reveal? The coming days will be a favorable time to explore these possibilities.

GEMINI (May 21-June 20): It’s a good time to become more of who you are by engaging with more of what you are not. Get in the mood for this heroic exercise by studying the following rant by Gemini poet Adam Zagajewski (who writes in Polish), translated by Gemini poet Clare Cavanagh: “Read for yourselves, read for the sake of your inspiration, for the sweet turmoil in your lovely head. But also read against yourselves, read for questioning and impotence, for despair and erudition, read the dry, sardonic remarks of cynical philosophers. Read those whose darkness or malice or madness or greatness you can’t yet understand, because only in this way will you grow, outlive yourself, and become what you are.”

CANCER (June 21-July 22): You’re on the verge of breakthroughs. You’re ready to explore frontiers, at least in your imagination. You’re brave enough to go further and try harder than you’ve been able to before. With that in mind, here’s a highly apropos idea from Cancerian novelist Tom Robbins. He writes, “If you take any activity, any art, any discipline, any skill, take it and push it as far as it will go, push it beyond where it has ever been before, push it to the wildest edge of edges, then you force it into the realm of magic.” (I might use the word “coax” or “nudge” instead of “force” in Robbins’ statement.)

LEO (July 23-Aug. 22): In her story “Homelanding,” Margaret Atwood writes, “Take me to your trees. Take me to your breakfasts, your sunsets, your bad dreams, your shoes. Take me to your fingers.” I’d love you to express requests like that. It’s a favorable time for you to delve deeper into the mysteries of people you care about. You will generate healing and blessings by cultivating reverent curiosity and smart empathy and crafty intimacy. Find out more about your best allies!

VIRGO (Aug. 23-Sept. 22): You’re about to reach the end of your phase of correction and adjustment. To mark this momentous transition, and to honor your ever-increasing ability to negotiate with your demons, I offer you the following inspirational proclamation by poet Jeannette Napolitano: “I don’t want to look back in five years’ time and think, ‘We could have been magnificent, but I was afraid.’ In five years, I want to tell of how fear tried to cheat me out of the best thing in life, and I didn’t let it.”

LIBRA (Sept. 23-Oct. 22): It’s not a good time for you to be obsessed with vague abstractions, fear-based fantasies, and imaginary possibilities. But it is a favorable phase to rise up in behalf of intimate, practical changes. At least for now, I also want to advise you not to be angry and militant about big, complicated issues that you have little power to affect. On the other hand, I encourage you to get inspired and aggressive about injustices you can truly help fix and erroneous approaches you can correct and close-at-hand dilemmas for which you can summon constructive solutions.

SAGITTARIUS (Nov. 22-Dec. 21): The poet Nayyirah Waheed has some advice I want you to hear. She writes, “Be easy. Take your time. You are coming home to yourself.” I will add that from my astrological perspective, the coming weeks will indeed be a time for you to relax more deeply into yourself—to welcome yourself fully into your unique destiny; to forgive yourself for what you imagine are your flaws; to not wish you were someone else pursuing a different path; to be at peace and in harmony with the exact life you have.

CAPRICORN (Dec. 22-Jan. 19): “The chief object of education is not to learn things but to unlearn things,” wrote author G. K. Chesterton. He was exaggerating for dramatic effect when he said that, as he often did. The more nuanced truth is that one of the central aims of education is to learn things, and another very worthy aim is to unlearn things. I believe you are currently in a phase when you should put an emphasis on unlearning things that are irrelevant and meaningless and obstructive. This will be excellent preparation for your next phase, which will be learning a lot of useful and vitalizing new things.

AQUARIUS (Jan. 20-Feb. 18): Sergei Rachmaninoff (1873–1943) ultimately became one of the twentieth century’s most renowned composers. But his career had a rough start. “Symphony No. 1,” his first major work, was panned by critics, sending him into a four-year depression. Eventually he recovered. His next major composition, “Piano Concerto No. 2,” was well-received. I don’t anticipate that your rookie offerings or new work will get the kind of terrible reviews that Rachmaninoff’s did. But at least initially, there may be no great reviews, and possibly even indifference. Keep the faith, my dear. Don’t falter in carrying out your vision of the future. The rewards will come in due time.

PISCES (Feb. 19-March 20): Ancient Greek playwright Euripides was popular and influential—and remains so to this day, 2,400 years later. But there’s a curiously boring aspect in five of his plays, “Andromache,” “Alcestis,” “Helen,” “Medea” and “The Bacchae.” They all have the same exact ending: six lines, spoken by a chorus, that basically say the gods are unpredictable. Was Euripides lazy? Trying too hard to drive home the point? Or were the endings added later by an editor? Scholars disagree. The main reason I’m bringing this to your attention is to encourage you to avoid similar behavior. I think it’s very important that the stories you’re living right now have different endings than all the stories of your past.

Homework: Listen to and download my music for free. soundcloud.com/sacreduproar