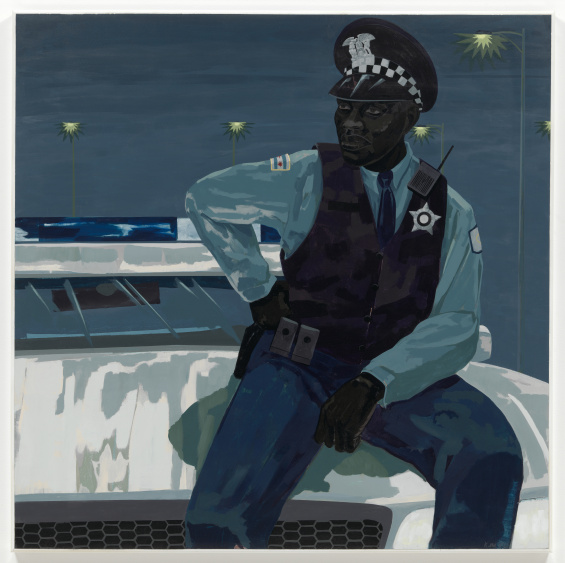 The art of loss

Former Chicagoan Naomi Beckwith joins current Chicagoan Theaster Gates, along with Julie Mehretu and Massimiliano Gioni in a virtual panel tomorrow about the New Museum’s exhibition “Grief and Grieving: Art and Mourning in America,” which opens today. Chicago artists in the exhibition include Dawoud Bey, LaToya Ruby Frazier, Theaster Gates and Kerry James Marshall, each of whom will share virtual conversations with curators on various dates linked in their names.

From the New Museum’s website: “From February 17 to June 6, 2021, the New Museum will present “Grief and Grievance: Art and Mourning in America,” an exhibition originally conceived by Okwui Enwezor (1963-2019) for the New Museum, and presented with curatorial support from advisors Naomi Beckwith, Massimiliano Gioni, Glenn Ligon, and Mark Nash. “Grief and Grievance” will be an intergenerational exhibition, bringing together thirty-seven artists working in a variety of mediums who have addressed the concept of mourning, commemoration, and loss as a direct response to the national emergency of racist violence experienced by Black communities across America. The exhibition will further consider the intertwined phenomena of Black grief and a politically orchestrated white grievance, as each structures and defines contemporary American social and political life. “Grief and Grievance” will comprise works encompassing video, painting, sculpture, installation, photography, sound, and performance made in the last decade, along with several key historical works and a series of new commissions created in response to the concept of the exhibition.”

Joffrey Ballet dancers Edson Barbosa and Dara Holmes, performing in Chicago, are among forty-six dancers from leading companies dancing in their home cities featured in the short film (just over five minutes) “Match.” It’s part of films.dance, which is described as “one of the most ambitious international dance film projects ever undertaken, Films.Dance engages more than 150 artists from fifty-two cities in twenty-five countries, culminating in fifteen short films that have been shot during the course of the pandemic.” The free-to the-public series is funded in part by Chicago’s Harris Theater.

A private-equity company headed by Strauss Zelnick, CEO of Take-Two, the video-game company behind the best-selling “Grand Theft Auto” series is on the verge of buying Chicago’s legendary Second City for a reported $50 million, according to the Financial Times. Given Second City’s well-publicized issues around racial equity that came to a head last year, it’s an unexpected match-up, since GTA has long been plagued with its own accusations of misogyny.

Or maybe “Waiting for Lefty,” the comedy?

The Chicago Reader has published a long piece about the reopening plans of local galleries and museums.

“‘I think we’ve seen, especially for larger institutions across the region, layoffs have been pretty common this year,’ says Charity Counts, executive director of the Association of Midwest Museums. Counts says large museums are actually in a unique bind: They have a specific revenue model that relies on keeping the doors open to sell tickets but also are too large to be eligible for certain PPP (Paycheck Protection Program) funding and other forms of coronavirus relief. In addition to ticket revenue, they often rely on memberships.”