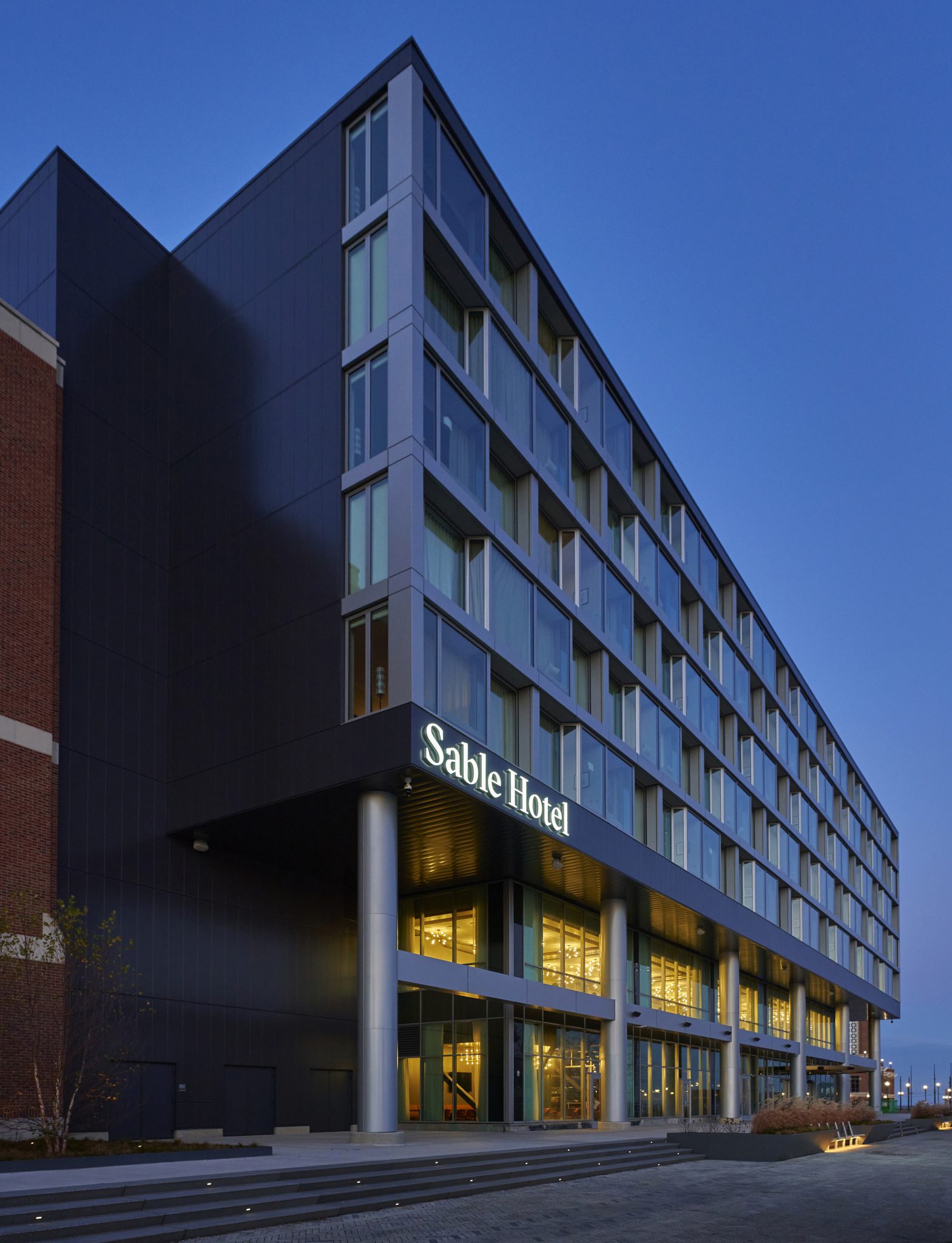 Room with a view

The Sable, the new hotel on Navy Pier, opens today. Designed by Chicago-based KOO (both architecturally and inside), the low-rise building will be the only hotel in the city with views from its vantage point east of Lake Shore Drive.

From KOO’s press release: “To make the most of this unique location, KOO started with a window box as the organizing principle for the design of the facade and guest rooms. Each of the 223 guest rooms feature a window seat from which to view Chicago’s unparalleled skyline and the lake’s striking, deep-blue waters. The angled surfaces of each room’s window seat create a textured exterior that reflects the ever-changing range of light, shadow and color of the lake.

“KOO’s interior design pulls inspiration from the location’s history as a port—and the USS Sable after which the hotel is named—by incorporating subtle nautical cues like weathered brass, ship building materials and the use of smooth curves similar to those of a ship’s interior cabin. These motifs are layered with elements drawn from 19th century Pageant of Progress held at the Pier and from the USS Sable’s pre-WW II life as a Great Lakes luxury passenger cruise ship. The color palette is grounded by mixed neutrals and highlighted by a spectrum of blues and blue- greens like the colors of Lake Michigan, balanced with an overall ambiance of luxury.”

Save the Emmett Till & Mamie Till-Mobley House Museum

Preservation Chicago has started a petition drive to block an ordinance that would “prohibit new house museums in Chicago’s residential neighborhoods,” citing the Emmett Till & Mamie Till-Mobley Home, the MOJO Muddy Waters House Museum, the National A. Philip Randolph Pullman Porter Museum expansion, the Lu Palmer Mansion and the Phyllis Wheatley House, all places that honor the city’s Black legacy. The petition will be presented at the Chicago City Council Zoning Committee on March 23.

Working on the Quads

2019 Newcity Literati of the Moment Eve L. Ewing and her husband Damon Jones have created the Ewing-Jones Scholarship to support one young person to attend the Leadership Academy at the W.E.B. Du Bois Scholars Institute, hosted at Princeton University.

The longtime owner of The Mutiny, the Logan Square punk-rock club that closed in 2018, has died of prostate cancer. Block Club Chicago has a long obituary of Mroz, including this nugget:

“The dive bar had a reputation for rowdy shows; musicians would tear down the ceiling or run around naked as they played — and Mroz would look the other way. One night, Mroz’s office went up in flames as a band was playing. Within two hours of firefighters putting out the blaze, the bar was open again, even with Mroz’s office charred.”

The longtime music director of Ravinia, as well as the Metropolitan Opera, has died of unreported causes. Levine was long one of the titans of classical music, until sexual misconduct allegations brought his career to a crash landing.

No Dead for Wrigley, yet

The concerts canceled in 2020 at Wrigley Field due to the pandemic have been rescheduled, including Guns N’ Roses July 21 and Lady Gaga August 27.

Victory Gardens Theater has appointed onetime child actor Ken-Matt Martin, currently associate producer at the Goodman, as its new artistic director. At Goodman, he co-created and curated the Future Labs new play development program. Chris Jones, writing in the Tribune, said that Martin “is the latest example of a surely unprecedented wave of incoming Black artistic talent with the challenging task of leading the Chicago theater and dance communities out of a bruising pandemic.” Jones added “none of this new group of artistic leaders was born here, nor did they emerge from one of the city’s many training programs, a traditional source of artistic leadership for the city.”