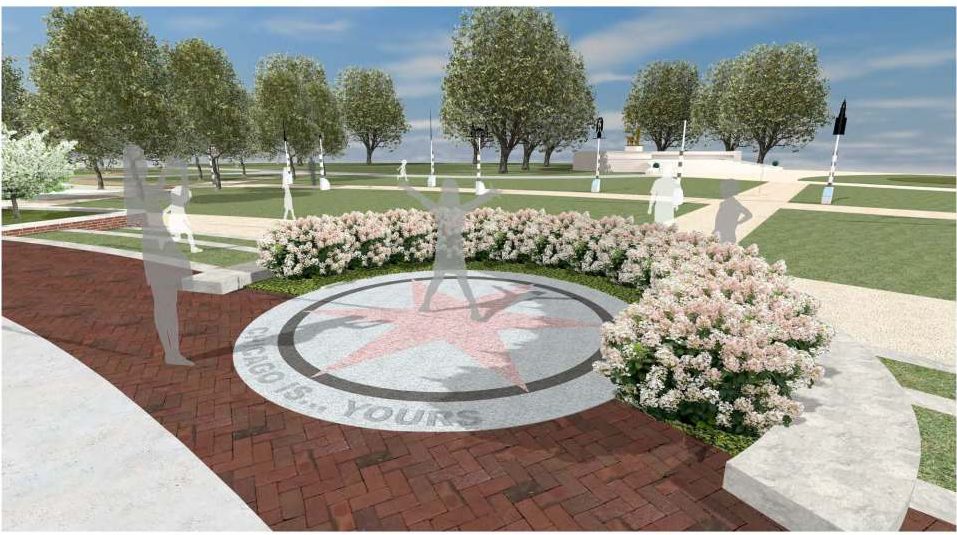 Rendering of part of the Richard M. and Shirley H. Jaffee History Trail at the Chicago History Museum

In the face of substantial pressure, Ald. Sophia King withdrew her ordinance to regulate house museums. Yesterday’s Sun-Times carried a story that revealed that King lived a few doors down from one such museum, the Elijah Muhammad House Museum at 4847 South Woodlawn, and that she had held up that redevelopment for several months without explanation.

The Chicago History Museum released plans for the Jaffee History Trail, which it describes as “an interpretive path through the park space around the Museum, will incorporate features such as the ‘Fire Blob,’ a rarely seen relic from the Great Chicago Fire of 1871 and the Couch Tomb, a reminder that the area once housed a Chicago city cemetery.”

Aldermen Michael Rodriguez (22nd) and Byron Sigcho-Lopez (25th) are proposing the city refund a portion of the $4,400 liquor license fee paid by bars and restaurants due to the pandemic, at an estimated cost of $40 million.

The onetime University of Chicago teacher, who was honored as a member of the 2010 and 2012 Newcity Lit 50, Adam Zagajewski died in Krakow, Poland, at the age of seventy-five. Newcity previously reviewed his poetry collections “Eternal Enemies” and “Unseen Hand.”

Jamie Kalven, the investigative journalist who brought the story of the Laquan McDonald police murder to public attention, is stepping down “to make way for the next generation of leadership,” he told Robert Feder.

Permits have been submitted for several hundred festivals this summer, according to Block Club Chicago. But all are in a wait-and-see mode, according to the city.

From Block Club Chicago: “More than 240 permit applications for festivals and events have been submitted to the Chicago Park District for 2021, according to public records obtained by Block Club. Organizers of Pitchfork, Ruido Fest and ARC Music Festival are seeking permits for Union Park, while Riot Fest and Summer Smash have applied for permits at Douglass Park, predicting 15,000 to 45,000 attendees, records show.”

Here’s his bio, as provided by the theater: “Sebastian Fabál (he/him/his) is an award-winning musical theatre writer, educator and dramaturg. A Cuban-American from Miami, Florida, he moved to Chicago after 7 years in New York City where he received his MFA in Musical Theatre Writing from NYU’s Tisch School of the Arts. While living in NYC, Sebastian’s 9-5 career began with overseeing various music and grand publishing rights for some of the stage’s most beloved artists through the Rodgers & Hammerstein and Boosey & Hawkes catalogs. As a composer, lyricist and bookwriter, Sebastian’s work explores the complexities of the second-generation Latinx experience, specifically the weird identity spectrum of neither being American or Cuban enough to be immediately accepted in either community. Since moving to Chicago 6 years ago, he’s worked as a musical dramaturg with The Second City, taught several musical writing classes through Chicago Dramatists, the Dramatists Guild Institute and Porchlight Music Theatre, and has co-founded the Chicago Musical Theatre Collective. Sebastian was most recently the Sr. Director of Customer Experience at Reverb.com, the marketplace for musicians, where he oversaw the global Sales and Customer Services teams through an acquisition by Etsy in the fall of 2019. Husband and father to two adorable spitfires bound to take over the world. www.jsebastianfabal.com

The staff at the community arts and culture nonprofit Experimental Station have formed a union and requested recognition from the entity’s board.