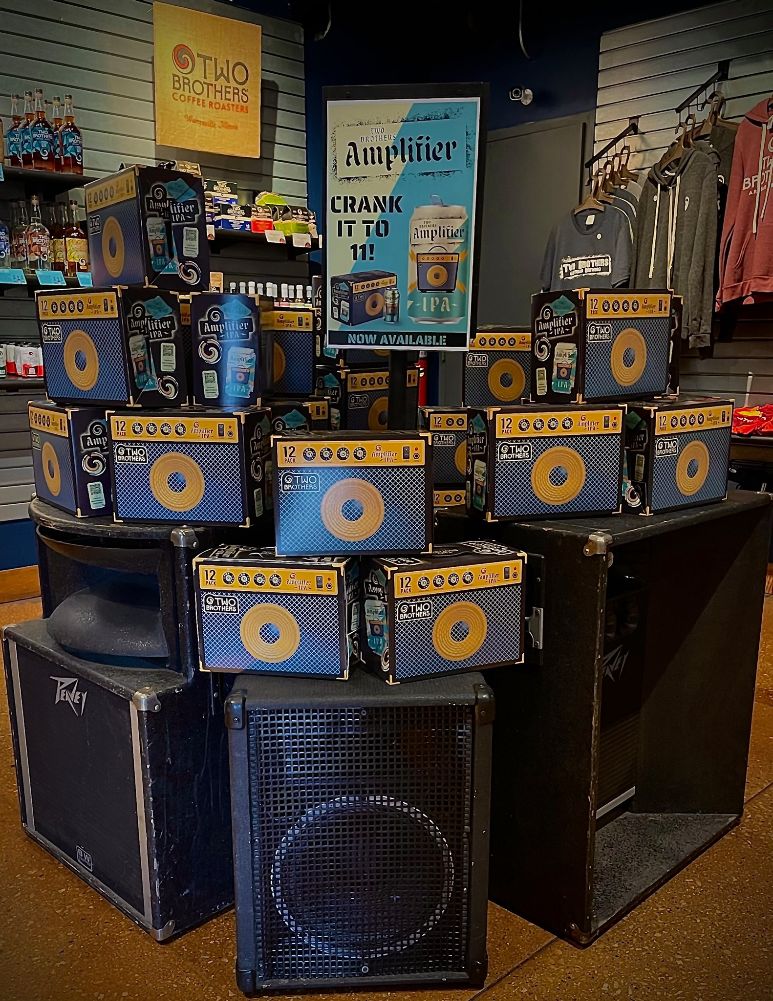 Who is that masked Manny?

Manny’s Cafeteria and Delicatessen will give away free food today, ending at 1,000 sandwiches or the first customer who comes in without being properly masked.

Two Brothers brewing is leaning into its historical music affinities for the launch of its new beer, Amplifier IPA, describing it as “big, juicy notes of citrus blast out of this fruit-forward IPA, with plenty of hops on the reverb to create some serious volts of flavor.” Nate Azark of 12 Line Studio created the packaging.

Evanston-based Bookends & Beginnings, owned by Nina Barrett, is suing Amazon in federal court for price fixing in a suit that the law firm bringing it hopes to broaden into a class action.

From the Detroit News: “Amazon’s restrictive contracts with major publishers has made it impossible for book retailers to beat Amazon on price, Seattle law firm Hagens Berman alleges in the suit. The contracts, with publishers Hachette, HarperCollins, Macmillan, Penguin Random House and Simon & Schuster–known as the ‘Big Five’–prohibit the publishers from selling books to other retailers for less than the price they offer Amazon, provisions Hagens Berman has said are ‘anticompetitive.'”

The tug-o’-Trib intensified, with Florida investor Mason Slaine, a minority Tribune investor, committing $100 million toward the bid led by Stewart Bainum. Slaine hopes to acquire the Orlando Sentinel and the Sun Sentinel in Fort Lauderdale as part of the deal. No response yet from Darth Alden.

Longtime Chicago blues guitarist Dion Payton has died at seventy. His career was marked largely as a live artist, with a long history at Checkerboard Lounge and Kingston Mines.

Get a tool card

The Chicago Tool Library is offering free seeds to its members as gardening plans get underway.

If you’re unfamiliar with this organization, the press release describes it: “The Chicago Tool Library is a nonprofit lending library located in Bridgeport that works a lot like a book library but, instead of books, they house an inventory of tools and equipment for building, gardening and home repair, and they also lend other unexpected items like stand mixers, pasta machines, podcasting microphones, a 3D printer and even camping equipment.”

Illinois Arts Alliance has launched a petition calling for the city of Chicago to invest $25 million in COVID relief for creative businesses. Signers so far include a vast swath of Chicago’s cultural organizations ranging from the largest to the smallest.

It reads in part, “Let us model the ways we invest as a city not only in downtown festivals, but also in elevating the efforts, energy, and deep commitment that our creative community has demonstrated in supporting our most impacted Chicagoans. If we agree that the arts are critical to the lifeblood of this great city’s vitality and its future, we also need to agree to investing public resources to support this work. “