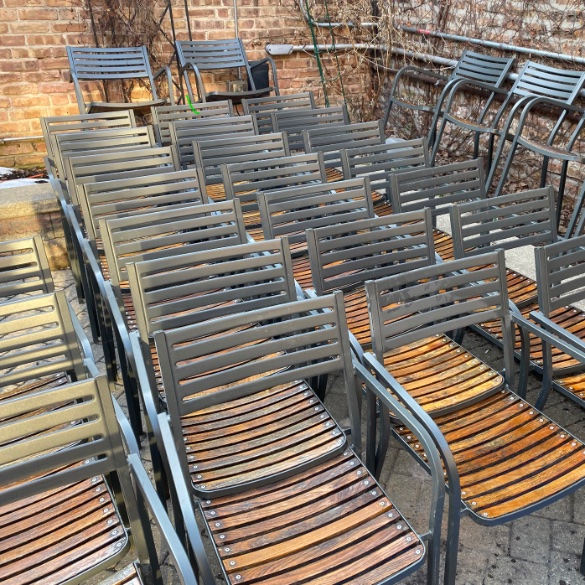 No-longer-secret secretive photographer Vivian Maier gets a fresh European look-see in Paris and Milton Keynes, fifty miles or so northwest of London. The Musée du Luxembourg in Paris mounts the show, organized by Madrid-based probate company diChroma photography, from September until January 2022, with M K Gallery in Milton Keynes exhibiting the work from June to September 2022. The Paris show will include previously unseen works, including Super 8 films along with audio recordings which “throw new light on her practice,” according to the press release.

New York’s New Museum has announced the artists for its fifth triennial, “Soft Water Hard Stone.” and running from October 27 to January 23, 2022. The exhibition will devote four floors to new work by forty artists working across twenty-three countries, including Brandon Ndife of Hammond, Indiana.

A Day Designed For Rick Valicenti

Graphic designer Rick Valicenti got his day in the sun in Columbus, Indiana. Via Jonathan Nesci on Instagram, by proclamation of Mayor Jim Lienhoop, April 1 was Rick Valicenti Day: “I ask all those present to join me in celebrating the contributions of Mr. Rick Valicenti to the City of Columbus.” The proclamation, notably, is in the design director of Thirst’s own UltraBronzo font.

Foxtrot in the Crotch

The 117-year-old edifice on the northwest Milwaukee-Damen wedge of the six-way intersection sometimes known as “The Crotch” has been home to long-lasting and short-lived restos since 1995: Soul Kitchen, Francesca Forno, Publican Anker and Café Cancale. The Wicker Park location across from the Damen Blue Line stop will soon be occupied by a Foxtrot Market location with café seating in a setting cheek-by-jowl with Austin arrival YETI Chicago and its branded wares in former Double Door digs. Alderman Daniel La Spata requested clearance for a walk-up window for the landmarked building. “We’re so, so excited about this location,” chief marketing officer Carla Dunham tells Block Club Chicago. “We love that neighborhood. We wanna come in and be an amenity to the whole neighborhood. We’re thrilled about the location.” Will the location’s history be noted? We have our doubts that Soul Kitchen’s signature appetizer, fried sage leaves, will be among the twenty-first-century upscale takeout.

Cubs opening day brought out sub-freezing temps and shivering crowds that couldn’t order from roaming vendors, but there’s mobile ordering via QR code for food to be brought to seats or pickup up nearby, Eater Chicago reports. A Trib takeout travels through a subjective belly-bust of twenty-four of what could be the city’s best hot dog stands.

Dough Kneaded For Campaign Against Anti-Asian Racism and Violence

A group of chefs from around the country respond to anti-Asian harassment and discrimination with a collaboration through food, launching the #doughsomething campaign. Chefs have created dough-based dishes for their menus, with a portion of April proceeds benefiting the group. “We need to come together in solidarity to help with awareness and support to fight AAPI hate,” Beverly Kim, chef-owner of Parachute and Wherewithall says in the group’s release. “As chefs and restaurateurs, we can use our platforms through food to bring our communities together as a united front. Through food, we seek to bring communities together to fight injustice, heal and celebrate diversity.” Participating Chicago institutions include Bang Bang Pie, Bungalow by Middle Brow, Demera Ethiopian, Floriole, Honey Butter Fried Chicken, Kasama, Kumiko, Longman & Eagle, Lost Lake, Luella’s Southern Kitchen, Lula Cafe, Mom’s/Marz Brewing, Monteverde Restaurant, Parachute, Parson’s Chicken and Fish, The Dandy Crown, The Long Room, Tubers Donuts and Wherewithall.

Andersonville’s Hopleaf Bar reopened Friday in the next wave of social reopening: “Hopleaf is coming out of hibernation,” the nearly two-decade-old better-beer mecca announced after closing operations at the end of patio season. “But the pandemic is NOT OVER YET,” the Hopleaf site cautions, “so wear your masks… We’ve spaced out tables and replaced some windows to make a safe and pleasant experience.”

Supermarket executive Bob Mariano returns to Chicago with a downsized fresh market, the Trib reports. Once a Dominick’s exec, the seventy-one-year-old businessman started namesake Mariano’s in 2010, and is now launching Dom’s Kitchen & Market in a converted strip mall in Lincoln Park in June. He hopes this is the first of many small fresh markets for a new generation. “If you look at what has happened in the years since we did Mariano’s, the customer has changed,” Mariano says. “People are looking for easy, quick, fun, poised to go and get food. We’re not the laundry detergent, paper towels place.”

The Trib looks at the reevaluation of Ernest Hemingway’s legend, through the latest Ken Burns documentary on PBS, as well in the Village of Oak Park. The best quote that reporter Christopher Borrelli evokes comes from Mary Dearborn, author of 2017’s “Ernest Hemingway: A Biography”: “I see his decline as psychotic depression. People didn’t know what to do with him. He was bipolar, really. He tried walking into an airplane propeller. He thought lights were on late in a bank because the IRS was going through his records.” Burns’ film, she says, “feels forward-looking. Because it complicates his myths. And shows a great writer crippled by them. I’m not sure he was even aware how damaging his legend—which he had a large part in constructing—was to himself. But the more we learn about him, the more it feels like a different person was in there.” Meanwhile: 140 filmmakers open-lettered PBS for more diversity and less Ken Burns: “It isn’t the time dedicated to Burns’ programming that the letter questions, but rather the time that is—or isn’t—given to other filmmakers, especially Black, Indigenous and other filmmakers of color.”

The Sunday Trib asks music industry professionals what’s next after a barren year. “As the ‘first to close, last to open’ (based on tiered lockdown restrictions), the music industry in Chicago and across the country has quietly faced some of the most brutal side effects of a world on pause… Not only did the pandemic eliminate (legal) concerts, parties and live performances; it may have eliminated an entire generation of emerging music industry professionals. The industry, of course, is comprised of more than just the musicians who make the music. There are the venue owners, the event producers, the bartenders and teachers and fans, among many others. And the success of the industry hinges on each facet coming together to create a symbiotic relationship of music consumption.”

Dental implants for legendary seventy-three-year-old Chicago stagehand Jolly Roger (born Chris Shaw) will cost $40,000, building on the four teeth he has left, reports the Sun-Times. The costs for the six-foot-eight concert constant’s surgery will be covered by a GoFundMe that’s garnered over $47,000 from nearly 400 donors. “That’s the part I’m going to find interesting, is if it’s going to change my looks,” Mr. Roger told Grace Asiegbu. “I know it won’t make me look any better; let’s hope it doesn’t make me look worse.”

Three new Luminarts Fellows have been named: in Strings, Claire Bourg; Winds, Zachary Good; and Piano, Muzi Zhao. The trio will receive $7,500 each and continued support from the foundation through professional development, performance opportunities and project grant funding.

The Wall Street Journal reports that the Swiss billionaire and the Maryland hotel magnate have assembled a fully financed, nearly $700 million bid for the Tribune Publishing Co. and its nine large-market dailies, versus the takeover deal previously struck with notorious hedge fund Alden Global Capital LLC. A special committee of the Trib’s board found the proposal by Stewart Bainum and Hansjörg Wyss superior to Alden’s $635 million gambit. The fully financed bid, including $600 million from the two men personally, gives the duo access to private financial data to allow for due diligence and further negotiation. “If Alden loses the deal,” notes the WSJ, “it would mark a stunning, eleventh-hour turnaround for the New York hedge fund, and a major victory for critics who say its model of aggressive cost-cutting has hurt the local news industry.”

The Oriental Institute at the University of Chicago named Theo van den Hout as interim director on April 1. The Arthur and Joann Rasmussen Professor of Hittite and Anatolian Languages, author of several books, is a member of the Royal Dutch Academy of Arts and Sciences, a Guggenheim Fellow and a Senior Fellow at the Institute for the Study of the Ancient World at NYU. He is also chief editor of the Chicago Hittite Dictionary.

Tempest in a Stovepipe?

An abbreviated Library and Museum (ALPLM) release, then a reply from the Foundation.

“As of April 1, the ALPLM no longer has an operating agreement with the Abraham Lincoln Presidential Library Foundation. That means the Foundation won’t be raising money or selling memberships on the ALPLM’s behalf. It won’t offer programming in conjunction with the presidential library or continue using state office space free of charge. The decision to part ways was made reluctantly and only after months of fruitless attempts to negotiate with the Foundation. The Foundation simply would not provide fundamental fiscal information or commit to future cooperation. It wouldn’t even agree to regular meetings with ALPLM executives. Without a commitment to work cooperatively to support ALPLM’s mission and provide meaningful transparency and accountability for the taxpayers of Illinois, it does not make sense to renew the ALPLM’s agreement with the Foundation. So, what does this mean for operations at the Abraham Lincoln Presidential Library and Museum? The short answer is that very little will change… Under the circumstances, the Abraham Lincoln Presidential Library and Museum must move forward on its own.”

A portion of the Foundation reply: “For months, the Abraham Lincoln Presidential Library Foundation (the “Foundation”) has been working hard and in good faith to negotiate with the State of Illinois and the Abraham Lincoln Presidential Library and Museum (ALPLM) to reach a new Memorandum of Understanding (MOU) to govern the relationship between the parties [but] we were unable to come to an agreement. Throughout the negotiations, the State and ALPLM were inconsistent, unreasonable and threatening in their demands, and spreading misinformation about the Foundation, leading us to question if they were indeed negotiating with us in good faith. As importantly, they also consistently demonstrated a fundamental misunderstanding of the Foundation’s role and responsibilities as an independent 501 (c) (3) organization. The Foundation is not a subsidiary of, nor vendor to the State of Illinois… We are puzzled and disappointed at this entirely avoidable outcome. We are especially shocked and dismayed that… the State and ALPLM unilaterally moved to evict the Foundation from our offices… As a result of the State and ALPLM’s heavy-handed and punitive tactics, we are left with no choice but to temporarily suspend our discretionary financial support to the ALPLM. The Foundation has historically existed to provide support and maximize resources for the benefit of the ALPLM, which has amounted to over $42 million since the Museum and Library opened to the public… President Lincoln said: ‘A house divided against itself cannot stand.’ The Foundation sadly agrees and remains committed to working towards better days ahead.”