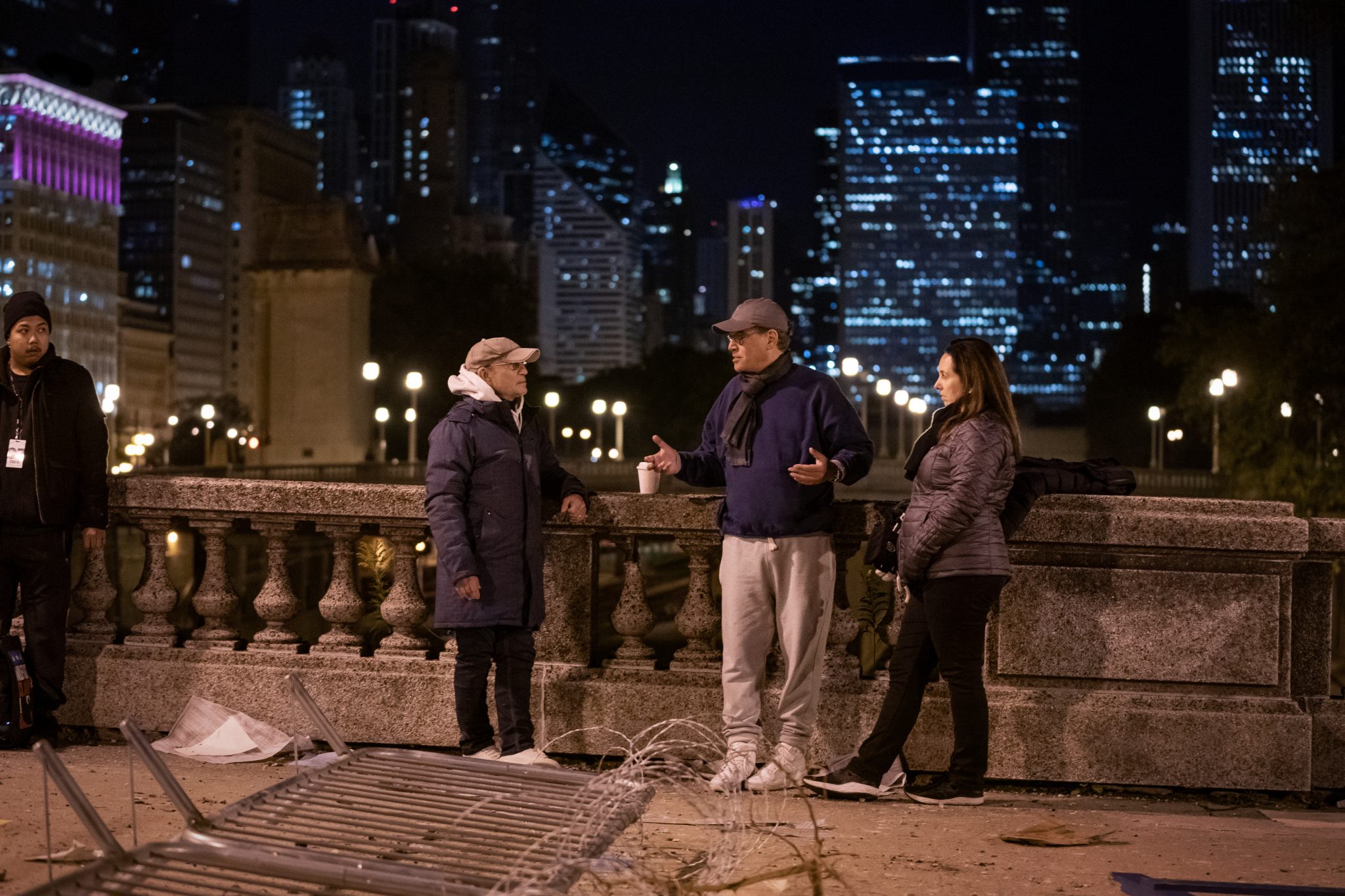 “Aaron Sorkin as Writer/Director in ‘The Trial of the Chicago 7′”/Photo: Niko Tavernise, NETFLIX © 2020

Non-profit digital startup incubator 1871, located in the Merchandise Mart, is expanding into the western suburbs, they announce in a release, intending to acquire Naperville-based innovation center hub88. “This will expand our physical footprint along the Illinois I-88 corridor and enable us to support more entrepreneurs, growth-scalers and innovators… Located in the historic innovation center of the Nokia-Bell Labs campus, hub88 empowers entrepreneurs to discover, test and commercialize products and services, with a focus on innovative technologies.”

“The Trial Of Chicago 7” Wins Another, But May Not Mean Much For Oscar

Los Angeles Times awards reporter Glenn Whipp considers the Oscar chances of “The Trial of the Chicago 7” after the set-in-Chicago, only partially shot-in-Chicago Aaron Sorkin script win for best ensemble at Sunday’s Screen Actors Guild Awards. (The Oscars have just over 9,900 voters; SAG, approximately 160,000.) “The winner of this award went on to take the best picture Oscar 12 of 25 years, including last year when ‘Parasite’ won both prizes,” Whipp writes. “Still, it’s easily the SAG Awards’ least-trustworthy Oscar precursor.” He also notes that “Chicago 7″ and “Minari” were the only SAG ensemble nominees even in the best picture race. “Oscar frontrunner ‘Nomadland’ was absent because its cast was populated mostly by nonprofessional actors, and guild voters aren’t going to reward that. The ensemble omission used to be a big deal until recent years, when ‘The Shape of Water’ and “Green Book’ won the best picture Oscar without a SAG cast nomination. So ‘Nomadland’ partisans have little cause for concern.”

Chicago cross-media production house Sarofsky rebrands, with a refreshed website showcasing what’s good and new in their busy world. “We get further faster than anyone else,” the site offers. “Bringing kinship & excellence to the intersection of art, design, technology & film production. We pride ourselves in our process which allows for premium work with a more fluid, realistic production mentality.” Showcased examples from the regular Marvel Studios contributors (who have created title montages for many Marvel titles including “Guardians of the Galaxy” and “Captain America: Civil War”) include material for the Russo brothers’ kinetic recent Apple production, “Cherry.” Sarofsky’s ninety-second sizzle reel is here. (Principal Erin Sarofsky was ranked in Newcity’s Film 50 in 2017 and 2019.)

Columbia, Missouri’s Como magazine interviews True/False Film Fest’s incoming operations director Carly Love on how the Midwest’s most-renowned nonfiction film festival destination will shift itself from jam-packed venues in town to verdant parks in the great outdoors. “This year how people move through the fest is much more detailed work, because in a normal year, we’re inside venues like the Missouri Theatre that are built out already for experiences like sitting to watch a movie. At Stephens Lake Park, we are taking a blank slate and having to build what the venue looks like. A lot of my team’s work has been centered on how people move through these new venues, what that looks like from a ticketing standpoint, and what kind of staff and equipment it takes to make that successful.”

How Many Books Were Hounded Out Of Libraries in 2020?

The Sun-Times carries Hillel Italie’s AP report on The American Library Association finding that more than 270 books were challenged in 2020 compared to 377 the year before. That number, however, overlooks a great number of complaints that are never publicized, and the association says the infrastructure to compile complaints was disrupted in the pandemic year. Biggest offenders to the readily offended include Harper Lee, Sherman Alexie, John Steinbeck. “Alex Gino’s ‘George’ was the most frequently criticized book, with objections including LGBTQ content and ‘not reflecting the values’ of the community. The No. 2 book for complaints was Ibram X. Kendi’s and Jason Reynolds’ ‘Stamped: Racism, Antiracism, and You,’ challenged in part for ‘selective storytelling incidents’ that do not reflect racism against all people. A second book co-written by Reynolds, ‘All American Boys,’ faced complaints about political bias, bias against men, and the inclusion of rape and profane language. Others in the top 10 include Angie Thomas’ bestseller about police violence, ‘The Hate U Give.'”

“Blow Your House Down”: Late To The Moment To Hate?

In the New York Times, Dani Shapiro reviews Chicago writer Gina Frangello’s “Blow Your House Down,” headlining it a “rage-fueled memoir of a marriage-ending affair”: “’Blow Your House Down’ posits itself as a feminist manifesto, and its author veers between the two poles that are the greatest no-no’s in writing about the self: revenge and justification bordering on self-congratulation. She does this in increasingly dizzying recursive loops, arriving again and again at the same descriptions, questions and conclusions, without ever deepening her inquiry. She begins by placing herself and her story into a sociological context, hoping, one can only assume, to enlarge it by association: ‘You may have noticed that anger is making a comeback for women,’ she writes early on. ‘It might be fair to say that this is the moment I’ve been waiting for since the sixth grade.’ … Frangello compares her book to those of iconoclastic literary women through time, ranging from Jean Rhys to Marguerite Duras to Kathy Acker to Mary Gaitskill. (She finds them wanting.)” (The Times has an excerpt here.)

For The Love Of Books, World Travel And Poland

Block Club Chicago catches up with the March 19 passing of Lincoln Park writer, librarian and world traveler Leonard Kniffel, 73. Kniffel had been editor of the American Library Association’s American Libraries periodical. After his 2012 retirement, he became executive director of Chicago-based Polish American Librarians Association as well as a board member of the Polish Museum of America in Noble Square. “He was so proud of anything he did relating to Poland,” his widow, Carlon Walker said. “He had a generosity to promote all things Polish heritage and help people understand the history.”

Trib investigative reporter Todd Lighty tweeted on a gamy maneuver at Tribune Publishing the day after the Wall Street Journal reported on an alternative purchase plan to New York hedge fund Alden Global Capital’s plans. “The silence of Tribune Publishing editors over the treatment of their journalists is telling. [Tribune Publishing] offered $400 to frontline journalists—those who risked their safety to cover a pandemic and civil unrest—in exchange to fire them at will. That’s not a bonus but a screw you. Tribune Publishing’s ongoing mistreatment of its journalists explains why so many have fled its newsrooms for better jobs… Talent drain has been relentless. Journalists have even quit without a job. Think about that. Potential new owners have appeared on the horizon. Newslight, an entity owned by wealthy businessmen Stewart Bainum and Hansjörg Wyss, have made a credible bid to save Tribune Publishing from avarice hedge fund Alden Global Capital and its handmaidens.” Later, he continued: “The Chicago Tribune is worth subscribing to and supporting. I am very proud to work here every day. But damn, the company makes it really hard sometimes. This is astounding disrespect to our journalists, just flabbergasting stupidity.”

Adds City Hall reporter and Chicago Tribune Guild president Gregory Pratt: “Tribune Publishing wants Guild journalists to agree that they can lay any of us off at any time in exchange for a $400 bonus. Unbelievable and shameful. In what world?… We really need @chicagotribune bosses @colinjmcmahon and @chrissywtaylor to stand with the newsroom here and tell Tribune Publishing to stop the nonsense. The disrespect being shown to our journalists is deeply damaging to the paper and morale.” And Trib investigative reporter Joe Mahr: “I don’t expect any bonus to make up for the 3-week layoff we took to help the company. But it’s laughable to give a bonus to non-union, then tell us we can have one too if we give up a key union protection. That level of bad faith reinforces why we unionized in the first place.”

Tribune Offer Comes In Through The Window, But Journalists Still Find The Doors

“What has Tribune Publications done to help its journalists get the potentially life-saving COVID-19 vaccine?” tweets Trib investigative reporter Todd Lighty in another thread. “Nothing. Zilch. Nada. Squat. What has the Chicago Tribune Guild done? It has helped more than 40 journalists—including non-union newsroom managers—get the coveted vaccine.”