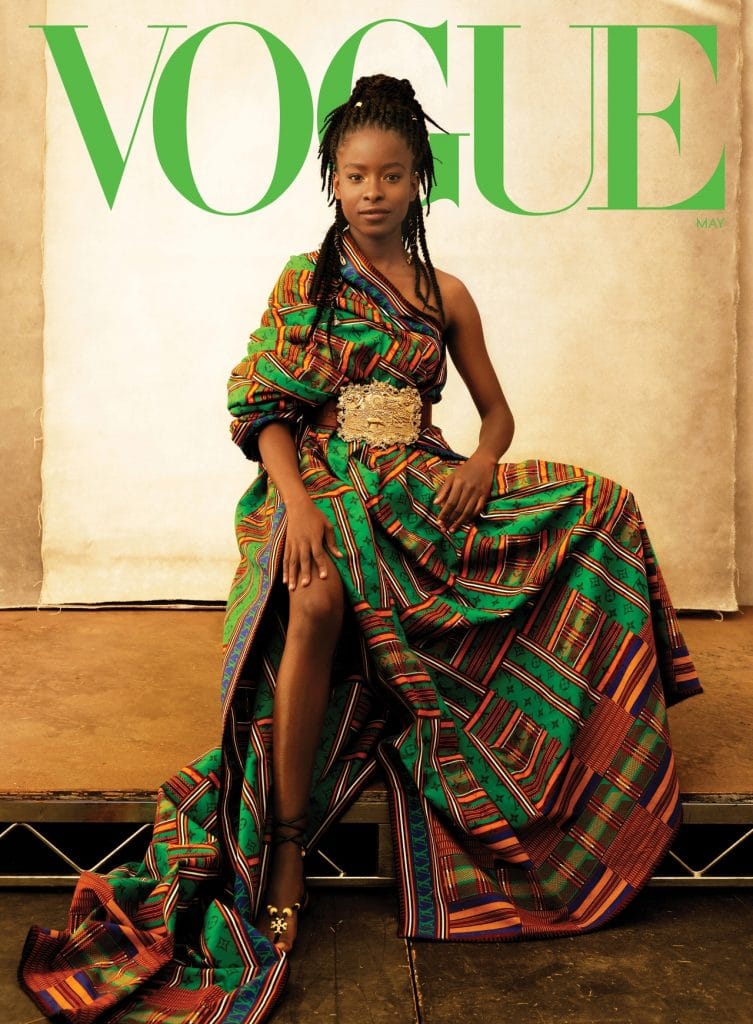 The Sun-Times reports on vocal members of the public at meetings of the advisory committee of the Chicago Monuments Project, under the hand of Mayor Lori Lightfoot, considering the potential removal of at least forty-one statues of Christopher Columbus, Italian fascist leader Italo Balbo and former presidents, including Abraham Lincoln. “The expectation that the figures that we memorialize in these monuments have to reach some unattainable bar in terms of their level of perfection is impossible to reach,” said committee leader Erin Harkey, the first deputy commissioner of the Department of Cultural Affairs and Special Events.

Poet Amanda Gorman celebrates her pair of Vogue covers, citing finery by Chicago’s Virgil Abloh: “Honored to be the first poet EVER on the cover of @voguemagazine, & what a joy to do so while wearing a Black designer, @virgilabloh. This is called the Rise of Amanda Gorman, but it’s truly for all of you, both named & unseen, who lift me up.” Abloh describes the genesis of his clothing at Vogue: “It’s important to know that we’re a young generation painting new pictures because the original pictures were erased. I’m not here to just repurpose historical images. There is a current generation that is eager, a 17-year-old somewhere that might be hiding their ethnicity or shy about having friends come over because the food smells different or his parents might eat differently, there are different traditions. What I represent as a designer is to expand the space; the garments are side effects.”

Estate of Fashion Gets Real

West Side fashion brand Fort Maner, its brick-and-mortar presence at 2819 West Harrison endangered by years of  unpaid taxes by the landlord, gets around the crisis by buying the building their storefront has been in since 2018, reports Block Club Chicago. ““I can do what I want. I can make my place bigger. I can hire more people from the community,” co-founder Tyshaun Hunter told Block Club. “It means the world to me.”

Lee Bey, the Sun-Times editorial board member who photographed and wrote “Southern Exposure: The Overlooked Architecture of Chicago’s South Side,” has dropped a Spotify mix of over fifty songs, largely by Chicago natives, to amplify the edifices one passes. “In my mind when I put this together, I’m in like a ’77 Mercury Marquis, an ’83 Buick Regal, an Electra 225 from the ’70s,” Bey tells Block Club Chicago. “There’s this kind of cruise these cars can do that the music is for.” The playlist includes Sam Cooke, Minnie Riperton, Marshall Jefferson, Byron Stingily and the poetry of Noname and Jamila Woods.

Curious City stalks a baker’s dozen of plain, wild bagels of Chicago at the Curious City podcast. Partially drawn from suggestions from listeners and social media, the search showed “there were great bagels in Chicago, although ones with ‘New York’ in their name seemed to fare particularly well.”

Netflix has reportedly paid as much as $30 million for a twenty-one-years-in-the-making Kanye West documentary series, directed by longtime friends Coodie & Chike (Clarence “Coodie” Simmons and Chike Ozah), who directed early music videos for West, including “Two Words,” “Through The Wire” and “Jesus Walks pt. 3.” Variety reports that figure may be too high, adding that the series, likely to run later this year, will “include never-before-seen footage of West, and will cover his career in music and fashion, his failed 2020 presidential bid, and the death of his mother, Donda West.”

The 2021 PitchBLACK Awards will honor documentary director-producer and Northwestern professor Marco Williams and announce PitchBLACK Forum winners at a virtual event Friday night. There will be a keynote address from Colin “Topper” Carew, producer of the sitcom “Martin,” and the creator of the CODE NEXT/Google Innovation Lab, which provides free, computer science education programs to Black and Latinx high school students in their own communities. Williams, ranked on Newcity’s 2020 Film 50, will receive the Black Public Media Trailblazer Award, which “recognizes documentary filmmakers with more than two decades of experience working primarily in public media as a producer, director, writer or editor, who also have a strong track record of mentoring media makers.” Tickets here.

The fourth season of “The Chi” surfaces on Showtime May 23 with an emphasis on interactions between police and the Black community. Vic Mensa, West Side native and rapper Da Brat, and Chicago native Jason Weaver have been added to the cast, the Sun-Times’ Evan F. Moore reports, taking in a newly released trailer.

A Chicago Bookstore Voice on How Bookstores Can Thrive

At LitHub, Seminary Co-op Manager Alena Jones writes about systemic factors underlying the problems faced by independent bookstores in “Toward a Definition of Contemporary Bookselling.” “Illuminating the work of bookselling is crucial,” she writes. “The more we can describe and advocate for our work, the better chance we have of it being valued, monetarily as well as conceptually, by the reading public. A clarification of definitions is necessary, but not all sufficient to establish a healthy ecosystem for bookstores. Just as crucial is examining the conflicting understandings we have of bookstores—including the assumptions and expectations built into those understandings—to learn how we have developed our current tottering gait; to articulate what historical, cultural, and economic factors have contributed to it; and, finally, to imagine future conditions under which bookstores can thrive.”

The Tribune published Eric Zorn’s rapid response to the death of thirteen-year-old Adam Toledo this week. Here’s how the Tribune Opinion page’s social media positioned Zorn’s column: “It’s too early to say what led to the fatal shooting of Adam Toledo by Chicago police, but it’s also too soon to make him a cause celebre. It’s never too early to stop pretending that 13-year-olds are inherently harmless.” Zorn’s column is headlined: “Let’s wait before turning slain 13-year-old Adam Toledo into a martyr.” “It’s not too early to stop romanticizing and infantilizing 13-year-olds,” the veteran columnist writes. “The key detail in this story, the detail that has made this a national and international topic of interest, is Toledo’s age… He was not a ‘baby.’ A 13-year-old pointing a gun, if that’s what he did, is as dangerous as a 23- or 33-year-old, maybe even more dangerous given what we know about the lack of judgment and impulse control in adolescents… Looming over these facts, whatever they turn out to be, will be the bigger question of how we can better support young people — all people — in our most disadvantaged, crime-riddled communities.”

Response was fast and fierce, locally, nationally and within the paper. Talia Lavin, author of “Culture Warlords: My Journey Into the Dark Web Of White Supremacy,” posted: “child murder: is it good? by this guy.” Greg Greene of Planned Parenthood Action summarized: “To risk stating the obvious, ‘maybe state-sponsored summary execution is just what this kid deserved’ is a breathtaking take to put to paper.”

Laura N. Rodriguez, a Tribune journalist, tweeted, “We should have waited to publish any opinion pieces about Adam Toledo’s case. I’m extremely disappointed and yes, let me clarify that editorial/opinion pieces do not reflect our reporting… I’m feeling pretty ashamed & frustrated because there have been ongoing conversations in the newsroom about the harmful narratives that we have the power to feed and create about Black and brown people in our city.”

Zorn is not new to the shooter-and-shooting beat, including a column last February, when he took flak for taking up the Kyle Rittenhouse shooting case and bringing in George Zimmerman and Trayvon Martin: “Justice doesn’t concern itself with whether the person on trial was a busybody or a wannabe or a naif. Justice asks what happened in those few critical, fraught moments that led up to and concluded a fatal altercation. Justice says that the dreadful as well as the righteous have a right to defend themselves. Zimmerman showed that truth. I predict Rittenhouse will confirm it.”

Katie Beck and Ricardo José Rivera are the newest Luminarts Fellows in Classical Voice. “Over 40 voice applicants applied and of those eight were selected as finalists and reviewed by our final jurors,” reports the foundation. “Our newest Fellows will receive $15,000 each and continued support from the Foundation through professional development, performance opportunities, and additional project grant funding.” Here’s a video of Beck and Rivera.

On the first day the federal government invited first-come, first-served applications for $16 billion in aid for nightclubs, movie theaters and other arts organizations slammed by the pandemic, the system crashed, the New York Times’ Ben Sisario and Stacy Cowley report. The Small Business Administration’s Shuttered Venue Operators Grant program, The Times quotes Robert Gomez, the primary owner of Subterranean, “It’s all been about, ‘Where am I going to get funding from?’” The owner of a small club in Phoenix says of the grants, “There is no Plan B.”

A half-dozen Chicago figures were among the 184 Guggenheim Fellows named late Thursday: