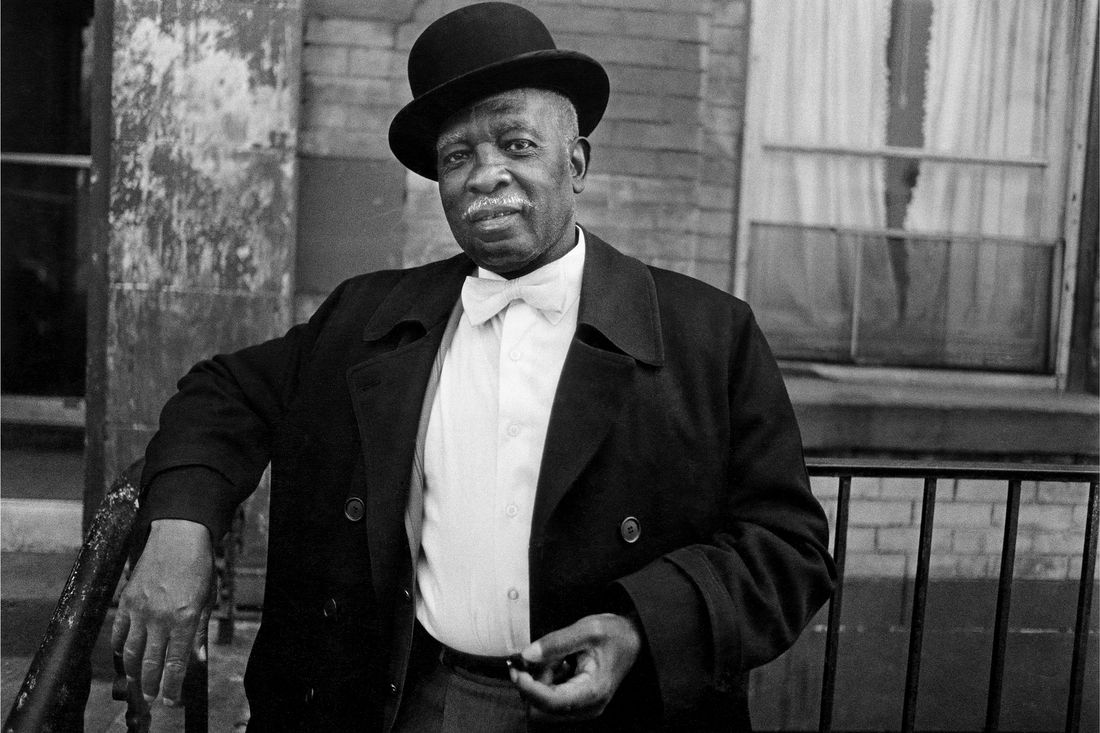 Surveying his nearly half-century of work, Chicago photographer Dawoud Bey’s retrospective, “An American Project” opens at the Whitney Museum of American Art in New York, including 35mm, Polaroid and large-format images. “We feel both the passion and contempt that he holds for his complicated country,” Sasha Bonét writes at Vulture. “In a street corner filled with rubbish, Bey sees the poetics of home. In a boy at a bus stop, he sees a Rembrandt painting. Where one sees an ocean, he sees the people who drowned in route to freedom. His visual poetics show the America we want to forget.” Bey and Bonét excavate six key images. (MacArthur fellow Bey was number one on the 2018 Art 50 and is now in our Art Hall of Fame.)

Denise Gardner has been elected as The Art Institute of Chicago’s chairperson of the Board of Trustees. Gardner follows Robert M. Levy as the leader of the governing body of both the School of the Art Institute of Chicago and the museum. In a release, Art Institute of Chicago trustee Tom Pritzker says, “As we looked for a chair who could fit our needs in the coming years, Denise emerged as the clear leader. Her vision for the Art Institute reflects our commitment to an inclusive understanding of human creativity.” Beyond her art collecting activities and her professional background—president of Insights & Opportunities, cofounder of Namaste Laboratories, vice president of Soft Sheen Products—Gardner has served on the boards of The Chicago Community Trust, Chicago Public Library, and Chicago Humanities Festival and currently holds positions on the boards of The Arts Club of Chicago and the Gaylord and Dorothy Donnelley Foundation. Her relationship of nearly three decades with the Art Institute as a volunteer and philanthropic leader includes fifteen years as a trustee and five years in her current role as vice chair of the board. Advocacy for historically underrepresented artists and audiences matter to Gardner. She says, “I look forward to working with the institution’s leadership and staff to fully realize our aspiration of ensuring that people of all ages from throughout the Chicagoland area and beyond, particularly children, see the Art Institute of Chicago as a place where they are welcome and truly belong.” “Her election may mark the first time a Black woman was elected to lead the board of a major U.S. art museum,” notes ARTnews. (Gardner is also a member of Newcity’s 2019 “Art 50.”)

The Chicago Workers Cottage Initiative, partnering with Preservation Chicago, has recruited SAIC students from a Preservation Planning Studio class led by Charles Pipal, adjunct professor in the Historic Preservation Department, to conduct a pilot survey of a part of the Logan Square neighborhood. “The workers cottage is a small-scale gable-roofed building type constructed by the thousands in Chicago from the 1850s to late 1910s as affordable working-class housing,” the CWCI relays “Their design is narrow and long to accommodate the typical 25-foot-wide lot in Chicago.” “If you could buy a house on Etsy, it would be a workers cottage,” says Tom Vlodek, with the Initiative. “These homes are increasingly succumbing to demolition as the move for taller, wider and longer single-family homes presses across Chicago.” “We have a remarkable legacy with these workers cottages,” the group’s release quotes Ward Miller, executive director of Preservation Chicago. “We are honored to be working on this campaign to elevate these homes and ensure greater protections.”

A Million Dollars In The Sky For Kanye’s Nike Air Yeezy 1 Prototypes?

Kanye West’s 2008 Grammy Awards Nike Air Yeezy 1 sneaker prototypes  will be up for sale at Sotheby’s, carrying an estimate of more than $1 million.

Having A Drink At “The Office”?

Twenty additional restaurants have joined High Road Kitchens Relief Program, which describes itself as “independent restaurants that provide food on a sliding scale to low-wage workers, health care workers, first responders, and others in need.”  “We’re proud to be part of the fifty-plus Chicago restaurants participating in this citywide effort to tackle food insecurity and promote longterm equity in our communities,” posts participant kitchen Takorea Cocina on Instagram. “We will be giving out 125 meals a week. No questions asked.” Of its initiatives, High Road Kitchens posts that it “provides jobs for restaurant workers and a subsidy for responsible restaurant owners who commit to paying a living wage and following equitable employment practices.” A list of restaurants is here, including Lula Cafe, Bar Sotano, Boulevard Sports Lounge, Carmelo’s Taco Place, Cousin’s Grill, Nipsey’s Restaurant, Peach’s on 47th, Split-Rail, Wherewithall, The Woodlawn and Wynwood Kitchen & Spirits.

It’s The Exhibitors That Got Small

The Tribune’s Michael Phillips reports on the vanishing of Navy Pier IMAX and what appears to be permanent closures of ArcLight Chicago in Lincoln Park and Glenview. The 300-seat Navy Pier space will likely be turned over to a non-movie-related ride or attraction; “no theater operators [are] on the table right now,” a Navy Pier spokesman says. Twelve theaters remain in the Chicago area that use some form of IMAX technology at smaller scale, including the Regal City North and screens in multiplexes in Naperville, Niles, Oak Brook, Schaumburg, Skokie, South Barrington and Woodridge.

Whether a permanent closure or a bargaining tactic over months of unpaid rent, the Decurion Corporation, the holding company that controls ArcLight says that it is turning over the keys to their locations, including 300 ArcLight and Pacific Theatre screens in California and the ArcLight locations in Lincoln Park and Glenview.

“It’s undeniable that ArcLight’s demise dims [a] growing flame of optimism for moviegoing,” writes Ryan Faughnder in The Wide Shot, the Los Angeles’ Times film biz newsletter. “For exhibition’s cheerleaders, it’s a reality check and a further sign that it will be a long road to recovery for theater chains… How will movies be released after the pandemic upended the norms of film distribution? Few people think the business is returning to movies being released exclusively in theaters for months before you can watch them in the living room. Studios say they still support—and need—theaters. But if anyone has come up with a grand, convincing, unified theory about what the movie business will look like… we haven’t heard it.”

“Let the wows flourish,” Phillips concludes, “on the other side of life… Let the wows find their rightful place in every art form we know and love. Including the movies.”

Halfway To The Scary Season

Extravagant horror hits Pilsen: Programmed and hosted by the team that brought you last year’s “Music Box of Horrors presents 31 Nights of Terror at the Drive-In” event and presented by Creepy Co., “Half-O-Ween 2021: Horror Weekend at the Drive-In” takes the Chi-Town Movies Drive-In in Pilsen for the weekend of April 30-May 2 to present five classic horror films with pre-shows. “Halloween III: Season of the Witch” kicks off late Friday, with double features on Friday and Saturday: “Midsommar” and “Alucarda”; and “Friday the 13th Part III” with “Sleepaway Camp.” Tickets here.

The American Writers Museum invites all today to an online preview of their May 14 reopening at its fourth anniversary. The YouTube event will offer a first look at the new virtual exhibit, “Ray Bradbury: Inextinguishable,” a chance to ask questions and win trivia prizes. Check in here.

Definition Theatre announced the recipients of its Amplify new play commissions, chosen from feedback from the Definition Theatre ensemble and showcase audience. Recipients include “Lot 110” by Nora Carroll; “Corazones” by Luna Dragon Mac-Williams; “What a Time to be Alive (You Say That Every Time)” by Paul Michael Thomson; and “are you ready to smash white things?” by Ireon Roach. As a part of the program, each winner will be part of a play development process with Definition Theatre that includes a payment of $2,000, two workshops and a public reading of the play. (“Definition Theatre is a culturally diverse theater dedicated to telling language-driven, relationship-oriented, socially relevant stories about and created with underrepresented communities in Chicago,” the company relates. “Our ensemble is a collective of artists, art administrators, educators, and designers who prioritize working towards and representing a more equitable theatre industry.”)

See Chicago Dance, the dance industry’s nonprofit service organization, has set June for the ninth edition of  Chicago Dance Month, which “honors the artists and companies that are eager to get back in front of audiences,” SCD says. “Chicago Dance Month is excited to highlight a full slate of live and virtual performances, classes and more from Chicago’s dance community.” Details here.

Evan F. Moore talks to filmmaker and Second City alum Adam McKay about the third episode of the “Death at the Wing” podcast, which he produces and hosts, debuting today, which considers the life, politics and death of Simeon hoops legend Ben Wilson.