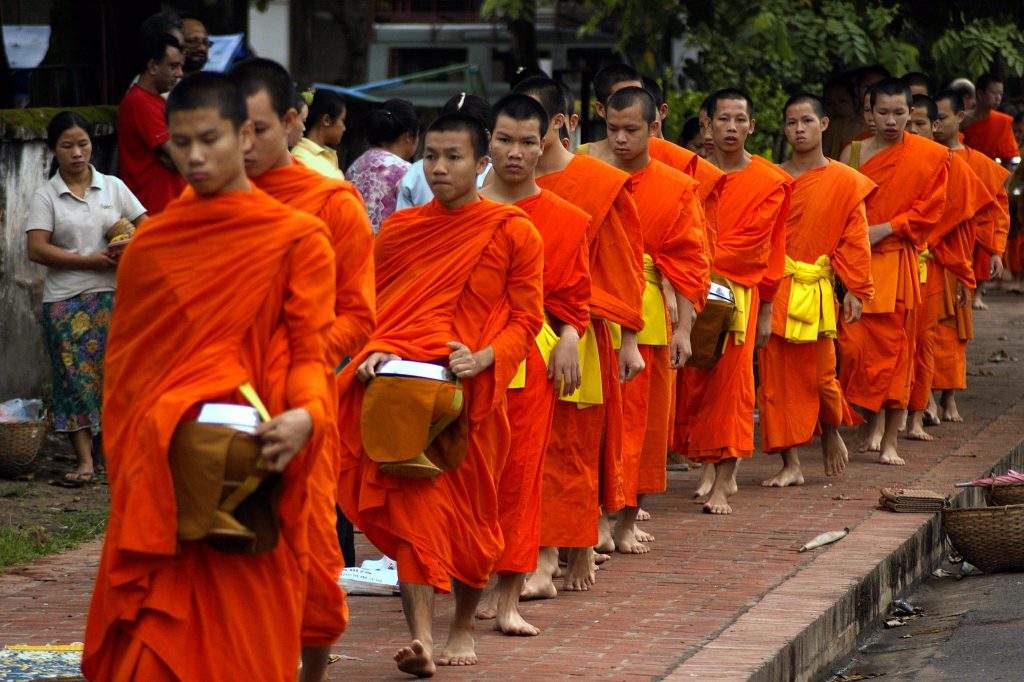 Buddhist monks with their “begging bowls”

ARIES (March 21-April 19): Blogger Emma Elsworthy wrote her “Self-Care List.” I’ll tell you a few of her fifty-seven action items, in hopes of inspiring you to create your own list. The coming weeks will be a perfect phase to upgrade your focus on doing what makes you feel healthy and holy. Here are Elsworthy’s ideas: Get in the habit of cooking yourself a beautiful breakfast. Organize your room. Clean your mirror and laptop. Lie in the sunshine. Become the person you would ideally fall in love with. Walk with a straight posture. Stretch your body. Challenge yourself to not judge or ridicule anyone for a whole day. Have a luxurious shower with your favorite music playing. Remember your dreams. Fantasize about the life you would lead if failure didn’t exist.

TAURUS (April 20-May 20): Some traditional Buddhist monks sit on city streets in Asia with a “begging bowl” in front of them. It’s a clay or iron container they use to solicit money and food from passers-by who want to support them. Contemporary American poet Marianne Boruch regards the begging bowl as a metaphor that helps her generate new poems. She adopts the attitude of the empty vessel, awaiting life’s instructions and inspiration to guide her creative inquiry. This enables her to “avoid too much self-obsession and navel-gazing” and be receptive—”with no agenda besides the usual wonder and puzzlement.” I recommend the begging bowl approach to you as you launch the next phase of your journey, Taurus.

GEMINI (May 21-June 20): Gemini-born Paul Gauguin (1848–1903) is today regarded as an innovative and influential painter. But his early years provided few hints that he would ultimately become renowned. As a teenager, he attended naval preparatory school, and later he joined the French navy. At age twenty-three, he became a stockbroker. Although he also began dabbling as a painter at that time, it wasn’t until the stock market crashed eleven years later that he made the decision to be a full-time painter. Is there a Gauguin-like turning point in your future, Gemini? If so, its early signs might show itself soon. It won’t be as dramatic or stressful as Gauguin’s, but I bet it will be quite galvanizing.

CANCER (June 21-July 22): A research team found that some people pray for things they are reasonably sure God wouldn’t approve of. In a sense, they’re trying to trick the Creator into giving them goodies they’re not supposed to get. Do you ever do that? Try to bamboozle life into offering you blessings you’re not sure you deserve? The coming weeks will be a favorable time for you to dare such ploys. I’m not guaranteeing you’ll succeed, but the chances are much better than usual that you will. The universe is pretty relaxed and generous toward you right now.

LEO (July 23-Aug. 22): In 2013, the New Zealand government decided to rectify the fact that its two main islands had never been assigned formal names. At that time, it gave both an English and Maori-language moniker for each: North Island, or “Te Ika-a-Maui,” and South Island, or “Te Waipounamu.” In the spirit of correcting for oversights and neglect, and in accordance with current astrological omens, is there any action you’d like to take to make yourself more official or professional or established? The coming weeks will be a favorable time to do so.

VIRGO (Aug. 23-Sept. 22): Author Grant Morrison observes that our heads are “big enough to contain every god and devil there ever was. Big enough to hold the weight of oceans and the turning stars. Whole universes fit in there!” That’s why it’s so unfortunate, he says, if we fill up our “magical cabinet” with “little broken things, sad trinkets that we play with over and over.” In accordance with astrological potentials, Virgo, I exhort you to dispose of as many of those sad trinkets and little broken things as you can. Make lots of room to hold expansive visions and marvelous dreams and wondrous possibilities. It’s time to think bigger and feel wilder.

LIBRA (Sept. 23-Oct. 22): Libran author bell hooks (who doesn’t capitalize her name) has a nuanced perspective on the nature of our pain. She writes, “Contrary to what we may have been taught, unnecessary and unchosen suffering wounds us, but need not scar us for life.” She acknowledges that unnecessary and unchosen suffering does indeed “mark us.” But we have the power to reshape and transform how it marks us. I think her wisdom will be useful for you to wield in the coming weeks. You now have extra power to reshape and transform the marks of your old pain. You probably won’t make it disappear entirely, but you can find new ways to make it serve you, teach you and ennoble you.

SCORPIO (Oct. 23-Nov. 21): I love people who inspire me to surprise myself. I’m appreciative when an ally provides me with a friendly shock that moves me to question my habitual ways of thinking or doing things. I feel lucky when a person I like offers a compassionate critique that nudges me out of a rut I’ve been in. Here’s a secret: I don’t always wait around passively hoping events like these will happen. Now and then I actively seek them out. I encourage them. I ask for them. In the coming weeks, Scorpio, I invite you to be like me in this regard.

SAGITTARIUS (Nov. 22-Dec. 21): “Where did last year’s lessons go?” asks Gillian Welch in her song “I Dream a Highway.” Now I’m posing the same question to you—just in time for the Remember Last Year’s Lessons Phase of your cycle. In my astrological opinion, it’s crucial for you to recollect and ruminate deeply on the breakdowns and breakthroughs you experienced in 2020; on every spiritual emergency and spiritual emergence you weathered; on all the scary trials you endured and all the sacred trails you trod.

CAPRICORN (Dec. 22-Jan. 19): Capricorn painter Henri Matisse had a revolutionary influence on twentieth-century art, in part because of his raucous use of color. Early in his career he belonged to the movement known as Fauvism, derived from the French term for “wild beasts.” During his final years, he invented a new genre very different from his previous work: large collages of brightly colored cut-out paper. The subject matter, according to critic Jed Perl, included “jungles, goddesses, oceans, and the heavens,” and “ravishing signs and symbols” extracted from the depths of “Matisse’s luminosity.” I offer him as a role model for you, Capricorn, because I think it’s a perfect time to be, as Perl describes Matisse, both “a hard-nosed problem-solver and a feverish dreamer.”

AQUARIUS (Jan. 20-Feb. 18): “The guiding motto in the life of every natural philosopher should be, ‘Seek simplicity, but distrust it.’” Aquarian philosopher Alfred North Whitehead wrote that, and now I’m proposing that you use it as your motto in the coming weeks, even if you’re not a natural philosopher. Why? Because I suspect you’ll thrive by uncomplicating your life. You’ll enhance your well-being if you put greater trust in your instinctual nature and avoid getting lost in convoluted thoughts. On the other hand, it’s important not to plunge so deeply into minimalism that you become shallow, careless or unimaginative.

PISCES (Feb. 19-March 20): In ancient Greek comic theater, there was a stock character known as the eiron. He was a crafty underdog who outwitted and triumphed over boastful egotists by pretending to be naive. Might I interest you in borrowing from that technique in the coming weeks? I think you’re most likely to be successful if you approach victory indirectly or sideways—and don’t get bogged down trying to forcefully coax skeptics and resisters. Be cagey, understated, and strategic, Pisces. Let everyone think they’re smart and strong if it helps ensure that your vision of how things should be will win out in the end.

Homework. I’m in the mood for you to give me predictions and past life readings. Send your psychic insights about my destiny. [email protected]