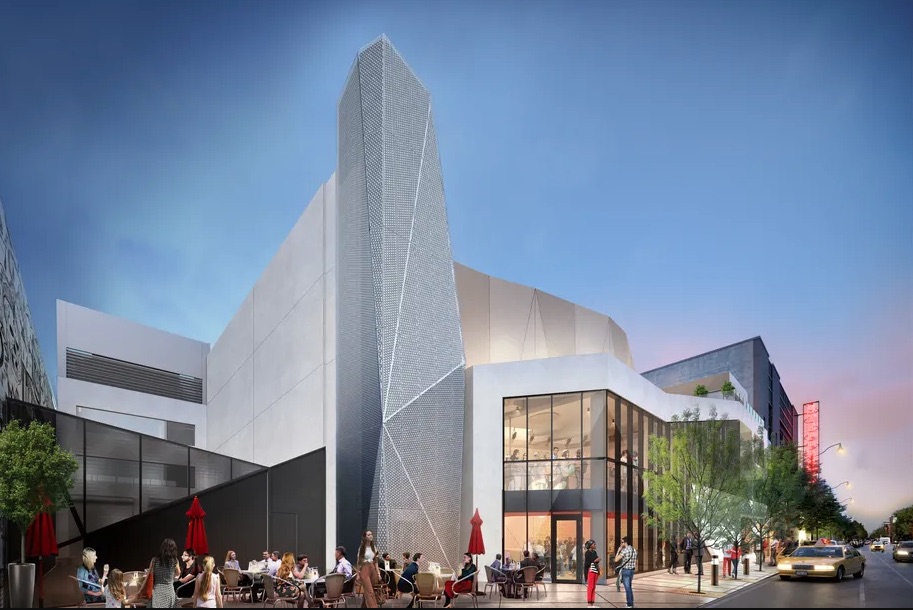 Skidmore, Owings & Merrill has completed its renovation of Willis Tower, including an observation deck and an interactive exhibit on the role of architecture in Chicago’s identity. “The Skydeck is part of SOM’s ongoing design stewardship of the building, which began with the building’s conception and continued in 2009 with the addition of the Ledge,” notes Surface.

Chicago Architecture Biennial announced the initial list of contributors selected by Artistic Director David Brown for the 2021 edition, “The Available City.” The list includes contributors from cities around the world including Cape Town, Caracas, Chicago, Copenhagen, Dublin, Paris, Basel and Tokyo. For the 2021 edition, Brown paired teams of global designers and Chicago community groups to explore uses of vacant spaces in the city, CAB described in a release. Each pairing will respond to critical issues such as health, sustainability, equity and racial justice. Installations, projects, activations and programs will be presented on digital platforms and on sites located throughout Chicago neighborhoods including North Lawndale, Woodlawn, Bronzeville, Pilsen, South Loop, the Loop and Edgewater. Over the coming months, teams will participate in a hands-on, community-driven design process that will activate latent spaces including community gardens, decommissioned schools, and storefronts, in addition to vacant lots. Read about each of the contributors here, including, from Chicago, The Bittertang Farm, Borderless Studio, Central Park Theater Restoration Committee, Englewood Nature Trail, Gensler (Stone Soup Group), in care of Black Women, Ania Jaworska, Open Architecture + Under The Grid, PORT, and ProjectHOOD.

Surface chats up Norman Kelley on restoring a riverfront space. Asked to restore “an outmoded Chicago lobby to its former glory, the Chicago and New Orleans–based firm tapped into a deep appreciation of the 1979 building’s context and the design by the original architect, Joseph Fujikawa, who emulated the style of Mies van der Rohe. The renovated lobby at 303 East Wacker Drive honors Fujikawa and this architectural sensibility with Luminary, a newly opened café-bar.”

Eater Chicago visits the Hot Dog Box, a Bronzeville father-daughter encased-meats enterprise working out of a shipping container. “I’ve been searching for my life’s purpose and hot dogs are my channel,” founder Bobby Morelli tells Eater. “If I have to go sell hot dogs on the corner to not have the pressure and stress of corporate America, I’m going to sell hot dogs and be at peace.” Working with his nine-year-old daughter Brooklyn, Morelli opened the site in August “inside a fire-engine red shipping container inside the Boxville marketplace just east of 51st and the Green Line…. The Hot Dog Box opened with a tight two-dog selection: a traditional Chicago-style sausage dragged through the garden, and a creation dubbed the Bronzeville Bourbon Dog, with smokey barbecue sauce, sport peppers, bacon, and carrot-cabbage slaw.” New attractions moving into summer include the “Compass Steak dog (four-ounce filet mignon hot dog, shrimp, spinach, creamy chipotle hot honey sauce) and a smoked teriyaki salmon hot dog (spinach, teriyaki sauce, green onions, toasted sesame seeds).” Here’s the Hot Dog Box Instagram, following their “elevated gourmet hot dog culinary experience,” as well as their music video.

In a batch of antique reviews, aggregation site Rotten Tomatoes unearthed an eighty-year-old review of “Citizen Kane” by a dead, imaginary Chicago Tribune movie reviewer, “Mae Tinee.” The negative notice by Tinee, a group pseudonym, dislodged Orson Welles’ film from atop its highest-rated films, to a 99, allowing “Paddington 2” to be touted as The Greatest Film Of All Time. Latter-day Tribune film critic Michael Phillips, a real person, cites the 1941 Tribune notice: “It’s interesting. It’s different. In fact, it’s bizarre enough to become a museum piece. But its sacrifice of simplicity to eccentricity robs it of distinction and general entertainment value.”

“We are excited to welcome Michelle Boone as the next president of the Poetry Foundation,” writes Caren Yanis, board chair in a release. “We’re confident in Michelle’s organizational and strategic planning skills to strengthen and sustain audiences for the art of poetry. Our goal is to become an equitable organization that fosters dignity and integrity, builds trust with partners and community members, and sustains and [builds] resources, including Poetry magazine and PoetryFoundation.org. Michelle brings deep experience in organizational management and community engagement.” Boone brings more than twenty years of professional community, civic, and cultural experience in leadership positions, at Navy Pier and with the Joyce Foundation, as well as a tenure as commissioner for Chicago’s Department of Cultural Affairs and Special Events (DCASE). In her role at Navy Pier as chief program and civic engagement officer, Boone served on the Executive Leadership Team; her responsibilities included the development and presentation of arts and cultural public programs, festivals and special events; and supporting Navy Pier’s diversity, equity, and inclusion strategies and staff engagement.

Alden Global To Pack On Millions In Debt For Tribune Buyout?

A familiar stockyard scent rises in the air at Tribune Publishing: Alden Global Capital could force Tribune Publishing, largely debt-free, to take on $375 million in loans so Alden can take it private. Newsmatters, from Digital First Media Workers, reports. “Alden Global Capital says it can buy Tribune Publishing with surplus cash on hand, but the former New York hedge fund’s merger agreement with Tribune appears to contradict the claim,” writes Julie Reynolds. “Doubts about Alden’s ability to purchase Tribune with cash are reinforced by a costly U.S. Department of Labor investigation, mounting lawsuits over broken lease agreements, and a stealthy exit from the top floor of Manhattan’s glamorous Lipstick Building to an unmarked virtual office in South Florida. Tribune shareholders are scheduled to vote on Alden’s bid to take over the company on May 21… The fine print in a slew of government documents shows a convoluted, Faustian bargain at work… Alden is likely to force Tribune to borrow hundreds of millions of dollars… The largely debt-free Tribune could take on $375 million in loans just so Alden can take it private — and, if history is our guide, it would then extract as much cash as possible and run Tribune into the ground. It’s an arrangement tantamount to going into debt to pay the hitman who’s targeting you. There are ample warning signs that Alden doesn’t actually have the cash on hand to buy Tribune’s outstanding shares.”  Replies Trib writer Steve Johnson on Twitter: “This is the more attractive offer that the @tribpub board likes? Try harder, trustees. Think better.”

At WTTW’s website, Paris Schutz reports on last-minute local efforts to obtain the Trib. “There are still active talks behind the scenes to come up with a bid that could derail Alden’s $630 million plan… Some of the city’s most noteworthy philanthropic groups have stepped up their efforts at putting together a rival bid in recent days, multiple sources confirm. Those organizations include the MacArthur Foundation – known for doling out the $625,000 MacArthur Genius Grant every year and claiming to manage about $7 billion in philanthropic investments around the world. The Pritzker Traubert Foundation – co-founded by Chicagoans Penny Pritzker and Bryan Traubert – have been active in recent talks. Pritzker and Traubert are the sister and brother-in-law of Governor Pritzker. The foundation is known for giving out the $10 million Chicago prize to help spur investment in disadvantaged Chicago neighborhoods… Sources also say the Ford Foundation has been involved in recent talks. Sources say the organizations have talked about the idea of forming a nonprofit entity to buy a controlling stake in the company but have been more focused on facilitating discussions between potential deep-pocketed investors.” Schutz quotes former Tribune investigative reporter Gary Marx: “Our city and state are in crisis right now. There is an ecosystem of journalism here. There are small nonprofits that are good at what they do. But there is no organization that can replace the Chicago Tribune in terms of being the voice of the city, in terms of holding our leadership accountable.”

Steppenwolf Theatre Company announced its 2021-22 comeback season in a new 50,000-square-foot theater building and education center on Halsted Street. “Designed by architect Gordon Gill of Adrian Smith + Gordon Gill Architecture (AS+GG) with theater design and acoustics by Charcoalblue, the transformed Steppenwolf campus will change the way Chicagoans and visitors experience the company’s cutting-edge theater with a new 400-seat Round Theater—one of its kind in Chicago—an education center, breathtaking city views, and new bars for community and socializing,” the theater says in a release. For the first time in Steppenwolf’s forty-six-year history, each play in the 2021-22 season is written by an ensemble member. Steppenwolf will build on the global reach of its virtual stage (currently streaming in all fifty states and more than twenty countries) with a lineup of new virtual works by ensemble members Tina Landau, Tracy Letts and Tarell Alvin McCraney. In November, Steppenwolf welcomes audiences back with the revival of “Bug,” by ensemble member Tracy Letts, directed by David Cromer with ensemble members Carrie Coon and Namir Smallwood reprising their roles. “The set of ‘Bug’ is still on the stage and our chapter with that production is not closed. These stunning performances—and this award-winning production—will once again reverberate throughout the building and welcome back our audiences to the Steppenwolf they know and love: brave, brazen, and defiant,” says artistic director Anna D. Shapiro.

Lightfoot Floats “Vax Pass”: “You want to be part of the fun, get vaccinated”

Chicago Public Health Commissioner Dr. Allison Arwady says she expects the city to maintain a form of a vaccination passport requirement next month for access to events geared toward young adults. “You get a vaccine, you’ll be able to get into a concert or get into an event,” the Tribune quotes Arwady. “For younger people, how can we make vaccine something that people are excited about getting?” Another campaign called “Vax and Relax” will encourage people to get vaccinated, with sponsored partnerships to provide free haircuts and manicures. “We all want to put this behind us and getting people vaccinated is the way to do this, so I don’t think of it as a bribe… There’s a big national conversation as you know about, about vaccination proof and vaccination travel. My goal at this point is to say, you want to be part of the fun, get vaccinated.”

The Sun-Times’ Fran Spielman reports that Mayor Lightfoot says “the goal will be to use the system as an incentive to bolster vaccination rates among young people most likely to attend outdoor events like Lollapalooza and Riot Fest.” Preferred seating at concerts could be a benefit of carrying the Lightfoot card. “We’re gonna be looking at ways in which we can incentivize people to get vaccinated and do that by looking at preferred seating. Preferred admission,” Spielman quotes the mayor. “The opportunities for opening up the city increase with the number of people who get vaccinated. So, please folks. There’s plenty of opportunity now all over the city to get vaccinated for free. Don’t be a bystander. Get in the game.”