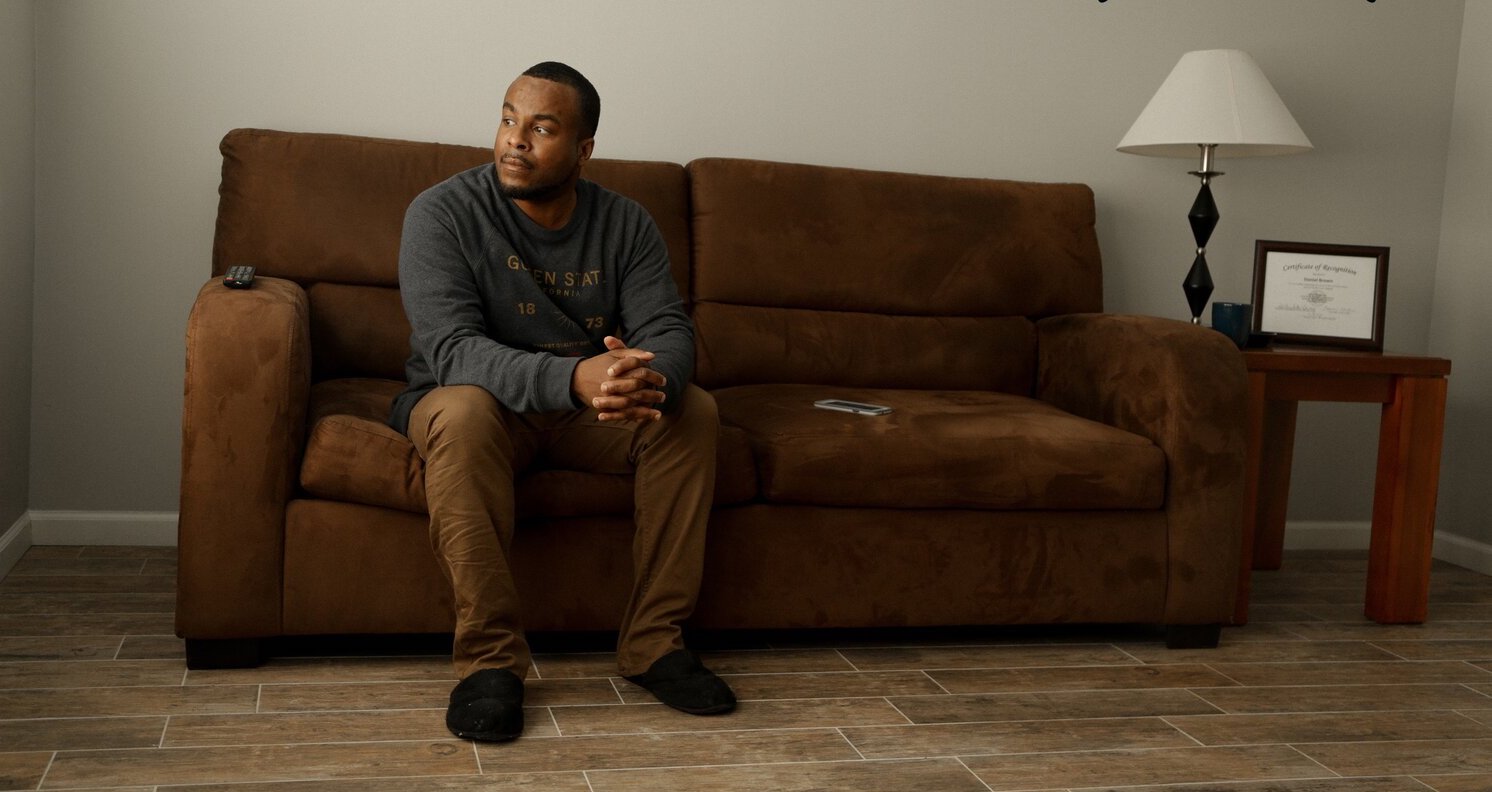 Margaret Byrne’s “Any Given Day” debuts at Hot Docs

Kerry James Marshall’s 1991 painting “Nat-Shango (Thunder),” a portrait of an enslaved man, Nat Turner, who led an 1831 rebellion in Virginia, will be up for auction, reports ARTnews. “The painting will be sold during Christie’s contemporary art evening sale on May 11, where it is expected to achieve a price of $6.5 million–$8.5 million.”

Thirty-five historic but decades-vacant Pullman Row houses are being restored to be sold as affordable housing, reports Block Club Chicago.

Evan F. Moore reports at the Sun-Times on the opening of Turner Haus, Chicago’s only Black-owned brewery. The brewery will share space within local coffee shop chain Sip & Savor’s location in the historic Rosenwald Court Apartments in the 4600 block of South Michigan by summer’s end. Owner Steven Turner says the brewery’s on-tap beers will be named after family matriarchs, including “Helen,” “Lola” and “Marlene.” “A coffee house and a microbrewery — two brothers doing it,” Sip & Savor’s owner Trez V. Pugh III tells Moore.

Former Au Cheval chef Sam Engelhardt opens En Passant in Logan Square at 3010 West Diversey, with “old-world comfort food” including duck confit and apricot terrine with mustard, pickles and sourdough, kefta-spiced cauliflower among the globally inspired dishes, reports Block Club Chicago. “It’s the only industry I feel is home,” Engelhardt tells Mina Bloom. “Whatever the industry is going to turn into, it’s beyond my control. All I know is I’m a part of it and I’m here to stay.”

A Face Behind Asia On Argyle

The Reader’s Philip Montoro profiles Jennifer “Nuky” Pham, who is part of the Celebrate Argyle campaign and books musicians and artists at pop-up events for Asia on Argyle’s cross-cultural creative collaboration group Haibayô. “Celebrate Argyle started at the beginning of the year. Every time we did a video for any of the restaurants, the funding from Dish­Roulette meant the restaurant got a $750 grant. We’re now sharing other resources—my pharmacy is a COVID-19 vaccination site, and we have a new partnership with Lyft, where you can get a ride credit to visit Asia on Argyle. Mainly we just want folks to come to Argyle Street and care about it.”

Hot Docs Debut for Margaret Byrne’s “Any Given Day”

Filmmaker Margaret Byrne‘s latest, “Any Given Day,” a portrait of three figures facing mental illness across five years, debuts this week at Hot Docs in Toronto. Canada’s POV Magazine looks at the latest longitudinal doc from the maker of “Raising Bertie” (Film 50 2017). “‘Any Given Day’ goes to very dark places, as it rightly should, while giving a frank portrait of the reality of living with mental illness… Byrne herself checks into a hospital during the course of filming and teaches her subjects that it’s okay to hit the pause button and refresh. At any moment, Byrne could have turned off the camera. However, she keeps rolling in the hardest times and allows both her fear and her concern for her subjects’ well-being to permeate the film. ‘Any Given Day’ is a film that ‘goes there.’ … In the film’s strongest moments, ‘Any Given Day’ invites comparison to ‘Hoop Dreams’ and ‘Time’ — films with very different subjects, which benefit from the filmmakers’ impulse to ask tough questions that hold society to higher standards.”

Chicago Film Society is one of Chicago’s august exhibition entities that has had fewer opportunities to push cash through the machine during the pandemic; a small new gesture is the crafting of a CFS tote to purchase and brandish from this link. “Ten years in the making, this CFS tote bag is robust enough to carry thirty cans of soup or two 2000 foot reels of 35mm film, but stylish enough to blend in with any of your favorite outfits. It has wildly exceeded everyone’s expectations and we are thrilled to offer it to the public while supplies last.” (CFS are part of the 2019 Film 50.)


Five To Midnight For Tribune Publishing

Only a few days left for the Tribune Publishing special committee to consider whether to pop Tribune Publishing entirely into the maw of Alden Global Capital or to allow leeway for other suitors who would maintain local journalism. Tweeted the Chicago Tribune Guild on Friday: “If you have the means to prevent a hedge fund from killing us to skim the profits, please act now.” The account was responding to New York Times media reporter Katie Robertson, who reports that “Stewart Bainum, the Maryland hotelier who is trying to buy Tribune Publishing, told the special committee this week he’d triple his investment to $300m, while he continues to seek extra backers, sources tell me. But time is running out…”

NPR media correspondent David Folkenflik: “Md hotel magnate Stewart Bainum Jr ups own stake to $300M in bid agst Alden Global Capital Wants to run BaltSun as non-profit; has investors for some markets; might hold onto NY Daily News. The catch: finding a partner to buy ChiTrib as part of overall $680 million bid.This according to two people w knowledge Bainum originally offered $65M for BaltSun as part of $630M sale to Alden, known for severe cuts; after haggling he bid for whole company. A billionaire philanthropist with interest in ChiTrib emerged and withdrew. Vote on Alden nears. Bainum made his offer [April 29]. Trib special committee on sale earlier rejected his offer as non-binding. It offered no comment tonight. (Alden holds 50% of shares but not part of cmte.)” Bloomberg reports that “Bainum is seeking help from deep-pocketed individuals interested in preserving local journalism. He has approached leaders of major foundations in Chicago about joining him in the bid, but has yet to find a willing partner.”

“Alden, Tribune Publishing’s largest shareholder with a 31.6% stake, reached an agreement in February to buy the rest of the company at $17.25 per share and take it private,” leads The Tribune Friday reportage: “The proposed merger will require approval from two-thirds of Tribune Publishing’s other shareholders… ‘We have enough people interested in a large number of the other properties that we’re not worried about the other properties, plus they’re smaller,’ the source said. ‘The challenge is that the Chicago Tribune essentially represents almost a third of the overall deal.’ … The challenge to finding a backer for the Chicago Tribune may come down to… “Tribune fatigue,” a weariness among Chicago’s business and civic elite to the plight of the city’s newspaper after years of changing ownership and financial struggles… While Alden’s $633 million offer is fully financed, the hedge fund reserved the right to… take on up to $375 million in debt to close the deal, according to its equity commitment letter filed with the Securities and Exchange Commission. An Alden spokesman did not respond to a request for comment Friday.”

Reading the Tribune’s own report. BuzzFeed reporter George Papajohn tweets ruefully, “Keep reading these 8 words over and over, and each time they sting. Each time they raise the same question: How can this be? ‘No one wants to own the Chicago Tribune.'”

Block Club Chicago headlines their “List Of Chicago Aldermen Indicted, Raided Or Implicated By The Feds, Criminally Charged Or Convicted Since 2019.” They write, “Chicago is routinely named the most corrupt city in the United States. We’ve had 30 aldermen convicted of corruption since 1973.”

Southside Weekly examines eighty years of media descriptions of children who died in encounters with the Chicago Police Department. “It’s never just one story, one article, one journalist. If we can’t hold each other accountable as peers and colleagues, then nobody else can.” An analysis bylined by Madison Muller, Alex Stein and Edward Vogel. “Newspaper coverage has relied heavily on department accounts of police killings at least since 1945, when James Gavin, police reporter for the Chicago Daily Tribune, wrote a breathless roundup of the fourteen ‘bandits and burglars’ killed by CPD ‘protectors and defenders of the home front’ in 1944—a year that saw the Chicago police kill two children under eighteen,” the Weekly reports. “CPD has a long history of killing children. From 2013 to today, Chicago police officers have killed more people under the age of eighteen than any law enforcement agency in the United States.”

Chris Jones at the Trib has details on Ravinia reopening: “Capacity, artistic plan, food, lawn in two halves, shows outside of the Pavilion.”

Deanna Isaacs breaks down the money behind the sweet-sounding “Arts 77” initiative at the Reader. “$60 million! For an arts community devastated by the pandemic and facing an uncertain future, that’s an impressive figure. It sounded like manna from heaven. What it mostly is, however, is manna from the future.” Much of it will be drawn from the capital improvement budgets of the city and the Park District. “It’s money intended for long-term infrastructure projects and funded by long-term public debt. So a lot of that $60 million will pay for brick-and-mortar-and-equipment improvements to civic and cultural facilities. At least $40 million will be spent to upgrade ”theater, music, dance, and visual art presentation capabilities’ at city cultural centers, many in parks on the South and West sides.” Isaacs breaks down the smaller dollar amounts and individual grants in her rundown.