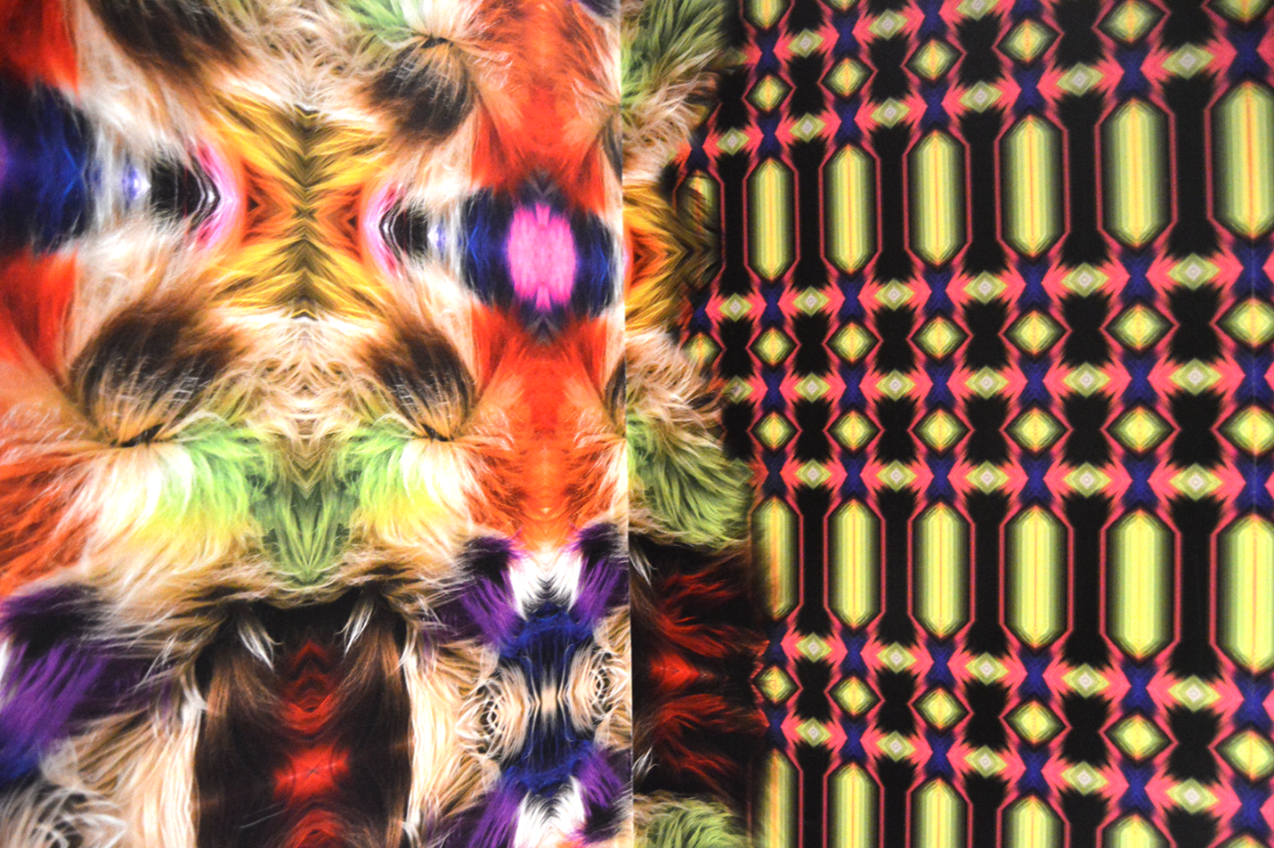 Goodbye, Karl Wirsum
Reports of the death of Chicago painter Karl Wirsum, born in 1939, a mainstay of the Hairy Who and the Chicago Imagists, filtered onto Instagram and Twitter on Thursday afternoon. From Corbett vs. Dempsey on Instagram: “We are mourning the loss of one of Chicago’s true originals. Corbett vs. Dempsey celebrates Karl Wirsum’s joyful life and work and his profound generosity as a teacher and colleague. We are so proud to have known him and to represent his rich legacy.” From journalist Nicole Rudick, here; graphic artist Chema Skandal here; and cartoonist and illustrator Max Huffman here. (Newcity review of Wirsum’s 2019 show at CvD here.)

River North’s 21c Museum Hotel Chicago in River North announce a site-specific installation by artist Nick Cave and designer Bob Faust (Newcity Designers of the Moment, 2020). “As a way to bring the energy and impetus of Nick Cave’s artwork outside of traditional museum walls, Cave and Faust have created nine patterns that pair to result in sixteen floors of bespoke installations.” The installation, “Wallworks,” is the latest addition to 21c Museum Hotel Chicago’s collection of contemporary art, on display throughout guest rooms and event spaces. “When tasked with activating the elevator lobbies throughout 21c Chicago, Cave and Faust quickly conceived of each landing as part of a portal system to define and make memorable each embarkation and debarkation. Installed in the elevator lobbies on floors 2-17, each is a diptych of complementary patterns designed from individual detail photos of Cave’s iconic ‘Soundsuits’ and ‘Tondos.'” Faust says, “These mini-installations envelope you with good juju. The relationship of pattern and scale to the architectural and compressed space is no accident, it’s an offering,” says Faust. “I like the energy we can get from the remixing process that this work requires,” Cave says. “I have to let go of the direct connection to the original work and embrace the role a simple detail can make for itself.”

Chicago-based Richard H. Driehaus Museum has appointed Anna Musci to the role of Executive Director, after more than a year of holding that post in an interim capacity. The Museum also announced that Trustee Zachary Lazar will take over as Board President, stepping into that role after Driehaus’ unexpected passing in early March. Musci came to the museum after a career in banking and wealth management, including as a financial advisor for UBS Financial Services and Oppenheimer & Company. A lifelong Chicagoan, Musci is a sustaining member of the Junior League of Chicago, where she has held advisory, committee chair and board positions; past Board member of Famous Door Theatre Company; past Advisory Board member of Chicago Lights tutoring and a Recording for the Blind volunteer.

The Netherys family behind Shelbyville, Kentucky’s Jeptha Creed Distillery has introduced their products to Illinois, including Jeptha Creed Kentucky Straight 4-Grain Bourbon, Vodka, Hot Pepper-Flavored Vodka and Blueberry-Flavored Vodka. (Jeptha Creed also makes moonshine and brandy.) Farming in Kentucky for five generations, the family grows or locally sources the grains used in their spirits, considering themselves a “ground-to-glass” concern. “Since all of their spirits are produced using corn, owners Joyce and Autumn Nethery wanted to be thoughtful about which corn they used. They planted two fields: one of non-GMO yellow corn, and one of heirloom varietal Bloody Butcher corn.” As the fields ripened, they observed the local wildlife and discovered a sign of the quality of the heirloom varietal: animals walked through the yellow corn to eat the Bloody Butcher corn. Available at Binny’s and other retailers; more information here.

Delivery apps DoorDash and Instacart, as well as Uber and Lyft spent “at least $1,190,000 on thirty-two lobbyists to persuade members of Congress on the PRO Act, first quarter disclosure reports show,” reports The Intercept. “The bill, which the House of Representatives passed in early March, would allow many gig workers to unionize and make it harder for companies to union-bust, among other changes. Uber alone spent $540,000 in the first quarter of 2021 lobbying on ‘issues related to the future of work and the on-demand economy, possible anti-competitive activities that could limit consumers access to app-based technologies,’ the PRO Act, and other related labor issues. Lyft spent $430,000, DoorDash $120,000 and Instacart $100,000 on lobbying on the PRO Act and other issues… The PRO Act would make the most pivotal changes to labor law since the 1970s. In addition to giving many gig workers the right to unionize, it would grant employees whistleblower protections and prohibit companies from retaliating against participants in strikes and other union-related activities.”

The fruits of the Roosevelt-era Works Progress Administration chronicling America during the Depression include The Federal Writers Project, which produced 1939’s still-fascinating “The WPA Guide To Illinois,” as well as enabled meaningful explorations by Studs Terkel, Zora Neale Hurston, Ralph Ellison, Saul Bellow, Conrad Aiken, Edward Dahlberg and Nelson Algren. Some minds in past years have wondered if that more distant past could be repeated; California congressman Ted Lieu thinks the time is now. Lieu’s goal, according to The Los Angeles Times, “is to document the pandemic’s impact on American life, honor the lives lost, employ struggling writers and academics and create a national archive of work from our time, just as the original FWP left us with a rich collection of guidebooks and oral histories, including the first-person Slave Narratives. The bill, the 21st Century Federal Writers’ Project, was introduced on May 6. The project would entail $60 million administered by the Department of Labor to nonprofits, libraries, news outlets and communications unions.” Lieu told the Times that the “pandemic has accelerated layoffs and position reductions at many news outlets, and many freelance and gig writers have also seen opportunities shrink. We can leverage their unique abilities to capture the drastic and unrelenting cultural shifts that are occurring throughout our nation and the many years of cultural shift that will follow. Not only will this program serve as a jobs program for many talented people, it will also supplement the national narrative and capture invaluable stories that may otherwise go untold.”

The Society of Midland Authors announced winners of its 2021 awards for the best books written by Midwest authors and published in 2020. The winners, one in each of six categories, were chosen by six panels of judges from almost 300 books submitted in Adult Fiction, Adult Nonfiction, Children’s Fiction, Children’s Nonfiction, Biography and Memoir and Poetry. The annual competition is open to authors who live in, were born in, or have strong ties to Illinois, Indiana, Iowa, Kansas, Michigan, Minnesota, Missouri, Nebraska, North Dakota, Ohio, South Dakota or Wisconsin. The six winning authors receive a $500 award and a recognition plaque. The 2021 winners are: adult fiction, Tiffany McDaniel (Circleville, Ohio), for “Betty”; adult nonfiction, Jack Shuler (Granville, Ohio), “This Is Ohio: The Overdose Crisis and the Front Lines of a New America”; children’s fiction, Helen Frost (Fort Wayne, Indiana), “All He Knew”; children’s nonfiction, Alan Page and Kamie Page (Minneapolis), “Bee Love (Can Be Hard)”; poetry, Nandi Comer (Detroit), “Tapping Out: Poems”; biography and memoir, Riva Lehrer (Chicago), “Golem Girl: A Memoir.” More information and a list of honorees is here.

Chicago rapper G Herbo faces fresh new federal charges alleging that he lied to an FBI agent, reports the Tribune, “investigating whether his crew used stolen identities to make up to $1.5 million in fraudulent charges for extravagant services. The criminal information filed in federal court in Springfield, Massachusetts, charged Herbo with making a false statement to a federal agent, which carries up to five years in prison. According to the charges, Wright, 25, lied to a federal agent in November 2018 about his relationship with Antonio Strong, a Chicago rap promoter and the alleged mastermind of the identity theft scheme.”

Governor Pritzker announced that Illinois will move into a new stage of reopening on Friday, May 14. The “Bridge Phase” allows expanded capacity limits for businesses and gatherings before moving to a full reopening in “Phase 5.” Unless there are significant reversals in statewide indicators, the governor’s office announced in a release, Illinois could enter “Phase 5” as soon as Friday, June 11. Meanwhile, the vaccine program extends to the offices of doctors and small medical providers, allowing them to order and administer shots onsite.

Angela Ford of The Obsidian Collection closed on a $1.25 million loan to become owner of Bronzeville’s Lu Palmer Mansion. “Ford is free to establish a museum there but needs a zoning change from the alderman to rent space or otherwise make money,” reports the Sun-Times. “The nonprofit seeks to establish a museum, library and archive within the 12,000-square-foot building once owned by the late famed journalist and his wife. It also wants to offer community meeting space for rent and modest retail, such as coffee and T-shirts… Ford complains the alderman stopped responding to her ever-more-urgent requests for help as she sought to close a loan that was predicated on the zoning change.”

“A lawsuit filed by an Adler Planetarium astronomer against American Girl for creating a doll in her likeness without permission was dismissed this week,” reports the Sun-Times. “Lucianne Walkowicz sought unspecified damages and wanted American Girl to stop selling the doll.”