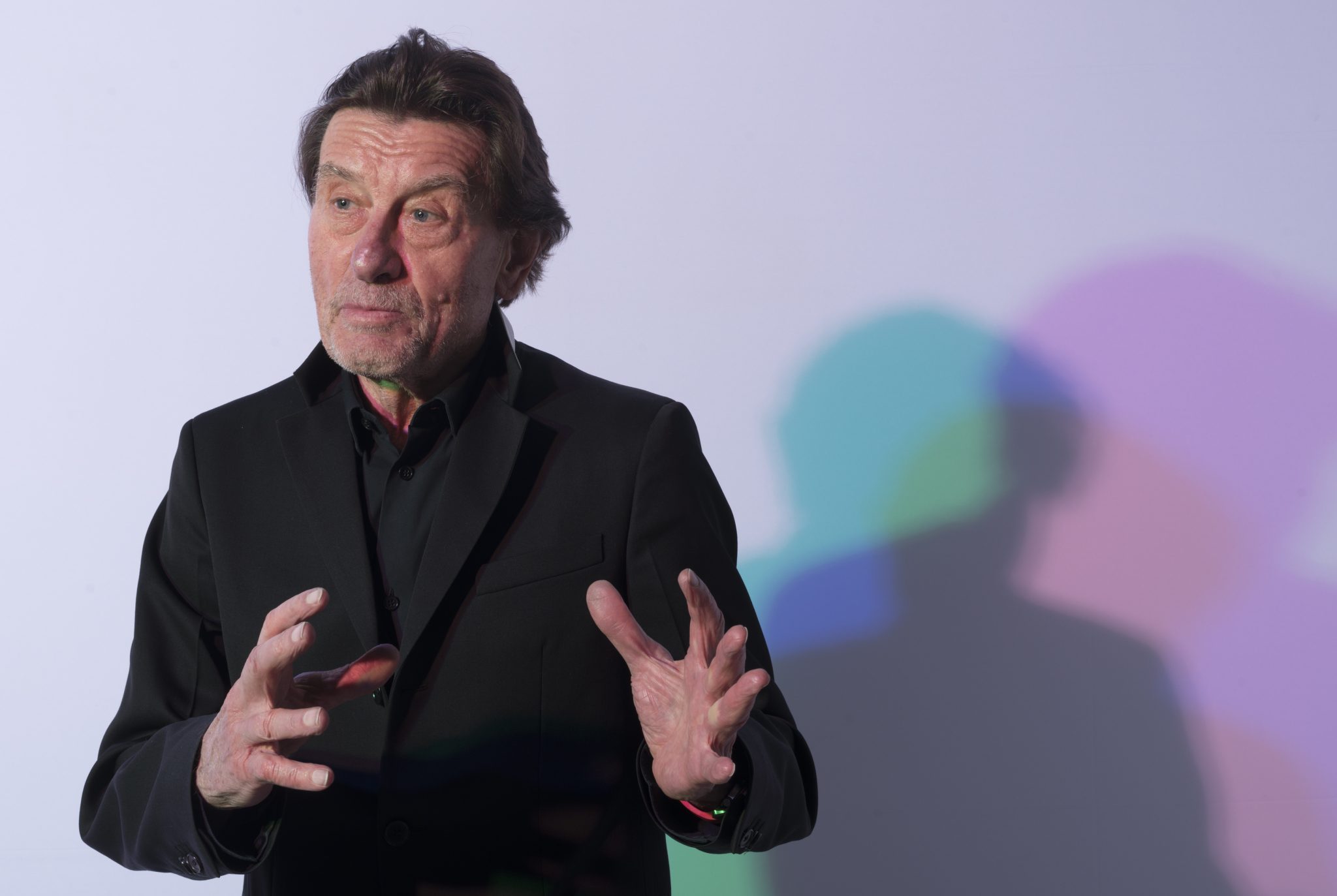 Helmut Jahn photographed for the 2018 Newcity Design 50, by Nathan Keay

The 2021 Terrain Residency recipients are Erin Washington, Sarah Aziz, Adam Farcus and Catherine Reinhart. “Along with financial support, residents are provided with time, space and resources for the development of public projects that align with the mission of Terrain Exhibitions: public art installations, architectural interventions, performances, social practice, and community programs.” The residency is hosted by the Springfield Art Association/Enos Park Residency for Visual Artists and is located in Springfield.

“Jahn and I spoke via Zoom a couple of weeks ago. He was in his office, seated in the northern light of the windows of the Jewelers Building, wearing black. He was focused and friendly, if slightly awkward,” writes F. Philip Barash, whose interview with Helmut Jahn for Newcity’s May issue cover story was the architect’s last. “We started by speaking about the Thompson Center and its impending sale by the State of Illinois but soon veered to other topics that were on his mind. Jahn lamented that the new generation of real estate development is timid, enthused about upcoming projects and pursuits around the world, and beamed as he told stories about his son and grandchildren. Looking over the interview notes I’m struck by both how ordinary our conversation was and, in the shadows cast by his death, how strangely ominous. I have known Jahn for well over a decade and have written about him in the past. But until this interview, I never grasped so clearly his relationship with risk-taking. Reflecting on his career and on his life, he kept returning to the subject.”

“Before the architect Helmut Jahn designed United Airlines Terminal 1 at Chicago’s O’Hare International Airport in the late 1980s, travelers coming or going from one of the world’s greatest architectural cities made a quotidian trudge through a boring portal,” Chris Jones writes at the Trib. “Jahn replaced that grim trajectory with a sensually thrilling explosion of light, sound and excitement. He put the romance back in travel, even for the humblest traveler, signaled Chicago’s cultural centrality toward of the dawn of the twenty-first century and created a much-copied model for new airports all over the world.”

“Where Helmut had lunch: Cupola of Jeweler’s Building, 35 East Wacker,” Blair Kamin remembers, with pictures. “The tour boat guides say Capone hung out there during Prohibition but as far as I know, that’s an urban legend. Whatever the case, Helmut gave it a po-mo makeover; it was perfect place to woo clients (+ critics).”

“The City News Bureau offices were in that building in the 90s,” tweeted Shamus Toomey, Editor-in-Chief, Block Club Chicago. “When I worked there, I loved seeing him pull into the underground parking lot with his light green Porsche 911, his fedora and his steel briefcase. He looked like a star.”

Heather Cherone, WTTW Chicago’s politics reporter, tweets: “Governor Pritzker mourns the death of Helmut Jahn, says he was an artistic genius,” but Pritzker adds, “The Thompson Center never lived up to Jahn’s vision,” that it’s “not the greatest example” of Jahn’s work.

“I was in Helmut Jahn’s presence only once and that was when Mayor R. M. Daley announced the Jahn designed transformation of Block 37 circa 1990. Never happened,” Eddie Arruza tweets with pictures of the towers that were not to be.

Deutsche Welle: “One of Germany’s star architects who achieved worldwide fame died in an accident…”  “We wanted to build buildings that combined solid architecture and engineering. A building has to be utilitarian and not just aesthetically pleasing,” he told DW in an interview in 2015. “We were interested in sustainability before the word ‘sustainability’ even existed.” Writes DW, “The glass-clad James R. Thompson Center in Chicago, one of Jahn’s most significant creations from the 1980s, is considered a Chicago landmark and a prime example of the postmodern architectural style. Its unique shape in comparison to the surrounding landscape has also given it a host of nicknames, such as ‘the Spaceship.’ In 1986, it earned the Distinguished Building Award of the Chicago chapter of the American Institute of Architects, with the jury calling it ‘the Pantheon of Chicago.'”

Sushi and Steak on Rush

Mansion on Rush opens on May 15 in the Gold Coast, “a Japanese fusion restaurant, bar and Champagne Lounge with Latin flair,” a release promises. “The concept by restaurateur Rodrigio Ferrari Millicardi is a sophisticated yet comfortable and distinctly Chicago experience featuring a sleek, stylish interior with global music, delectable fare and the highest level of service… The 160-seat restaurant is an escape from the crowded sidewalks below into a sophisticated yet comfortable and distinctly Chicago experience…We paid attention to every detail in the restaurant, from the custom millwork in the lounge to the original murals in our VIP entrance,” says Ferrari of his five-years-in-the-making first solo project. “The high-end design details provide a style unique to Mansion on Rush.” The concept features “intricate details and sleek designs including gold, silver, and pearl notes throughout the restaurant, mosaic and herringbone marble tiles, comfortable seating built to custom specifications to ensure guests can truly relax and enjoy their gastro experience in style. No corner was left untouched. Every area is designed with luxury in mind,” the release relates. “The raw bar features a tambura tide stone with plush seating so diners can observe the master sushi chefs at work. The ladies’ room boasts a herringbone marble tile with white gold accents and custom marble countertops for the ultimate ‘bathroom selfie’ backdrop.”

In The VHS Backroom At Borelli’s Pizza

“For the 2020 Chicago Independent Media Alliance fundraiser, I created bets at each level—I had to wear a dress, high heels, dye my hair and drink a beer (2nd in life),” tweets Reader co-publisher Tracy Baim (with video). “So PLEASE support the 2021 campaign here, through June 11.”

Chicago Tribune editorial page editor Kristen McQueary links to a narrow, seething range of reader comments, collated by the paper’s editorial board: “Let’s just be direct to the members of the Chicago City Council who are considering changing the name of iconic Lake Shore Drive to DuSable Drive: It would be a mistake… Would New York City rename the Empire State Building? Would San Francisco redesignate the Golden Gate Bridge? Would New Orleans rename Bourbon Street?” From Elmhurst: “It is a Chicago icon. It is a federal highway. It is bigger than any one ethnic group, person or race.” From Oak Park: “Two roads in the city that are internationally known are State Street and Lake Shore Drive. They are both celebrated in songs, stories and legend.” From Chicago: “Let there be a Ronald McDonald Drive or a Boeing 747 Drive or a Xfinity Lake Road, and let that fund a DuSable Initiative at improving human development in Chicago.” From Chicago: “Alderman David Moore, in introducing racism as the underlying issue, does a disservice to a legitimate debate about the renaming of a portion of Lake Shore Drive to honor Jean Baptiste Point DuSable.” From Evanston: “Whether or not DuSable personally hurt anyone, he started a migration and is a symbol of all the losses that followed. Is this too ‘woke’? I am wondering if any local Native American organizations have been asked to weigh in on this.”

Stand-up-and-coming Chicago comics audition for the Montreal Just For Laughs Comedy Festival in three just-announced dates, May 13, 20 and 27.

“Like countless other artists, Michael Martin’s death came just as he seemed to be hitting his stride professionally, after years of pursuing his passion while paying the bills with jobs such as waiter, groundskeeper, and housecleaner,” writes Kirsten Lambert at the Reader. “He played a prominent role in the 2020 independent film ‘Bloody Nose, Empty Pockets,’ which [was nominated] for the Grand Jury Prize at Sundance. One film critic had even talked about mounting a campaign to get Martin a Best Supporting Actor nomination for his work. He had recently wrapped a short, ‘The Butterfly Keeper,’ in which he played one of the two leading roles… Though Martin had lived in New Orleans for the past 20 years, he grew up in Minneapolis and took theater classes at the University of Minnesota before settling in Chicago in 1993. When he first moved here, his job as a telemarketer at the Chicago Symphony Orchestra led to a lifelong bond with a fellow telemarketer, Beau O’Reilly—a founding member of the Curious Theatre Branch… Martin went on to found his own storefront theater company, Great Beast, as well as writing, producing, and acting in multiple productions during his time in Chicago.”

Governor Says No On “Vaccine Passports”

“I do not think we should require people to have a vaccination passport. I think people may want to have one, so I hope they’ll be available,” Kelly Bauer of Block Club Chicago quotes Governor Pritzker. “But that’s a private decision. Private businesses will make their own decisions if they require proof of vaccination.”

Is Chicago In The “Midwest”?

“Is ‘Midwest’ really an accurate description of Chicago’s place in North America?” asks Edward McClelland at Chicago. “Do we really belong in the same geographic basket as Des Moines, Kansas City, Indianapolis, Cincinnati and Sioux Falls, cities with which we have very little in common culturally, linguistically, or politically? And more broadly, aren’t the commonly accepted boundaries of the Midwest—west of the Appalachians, north of the Ohio River, south of the Canadian border, and east of the Rockies—too broad to be tagged with a single rubric?” (His answer is categoric.)

Putting “Great” Back Into State Street?

“Building consensus and communion about what makes a block, sidewalk, or entire street ‘great’ is a messy and involved process,” writes Max Grinnell at the Reader. “It’s never easy and one might even say that there are as many opinions about what constitutes a ‘great’ street as drops of water in Lake Michigan…. I’ve always had a soft spot for State Street, that great street. When I first came to Chicago more than 25 years ago, I walked up and down during the days of the little lamented pedestrian mall and found a range of marvelous urbane moments, including Louis Sullivan’s intricate Carson Pirie Scott entrance, hot dog vendors, and an array of small businesses, including Soul by The Pound, Mort Cooper’s (a men’s clothing store), and the Music Mart at DePaul’s Loop Center.”