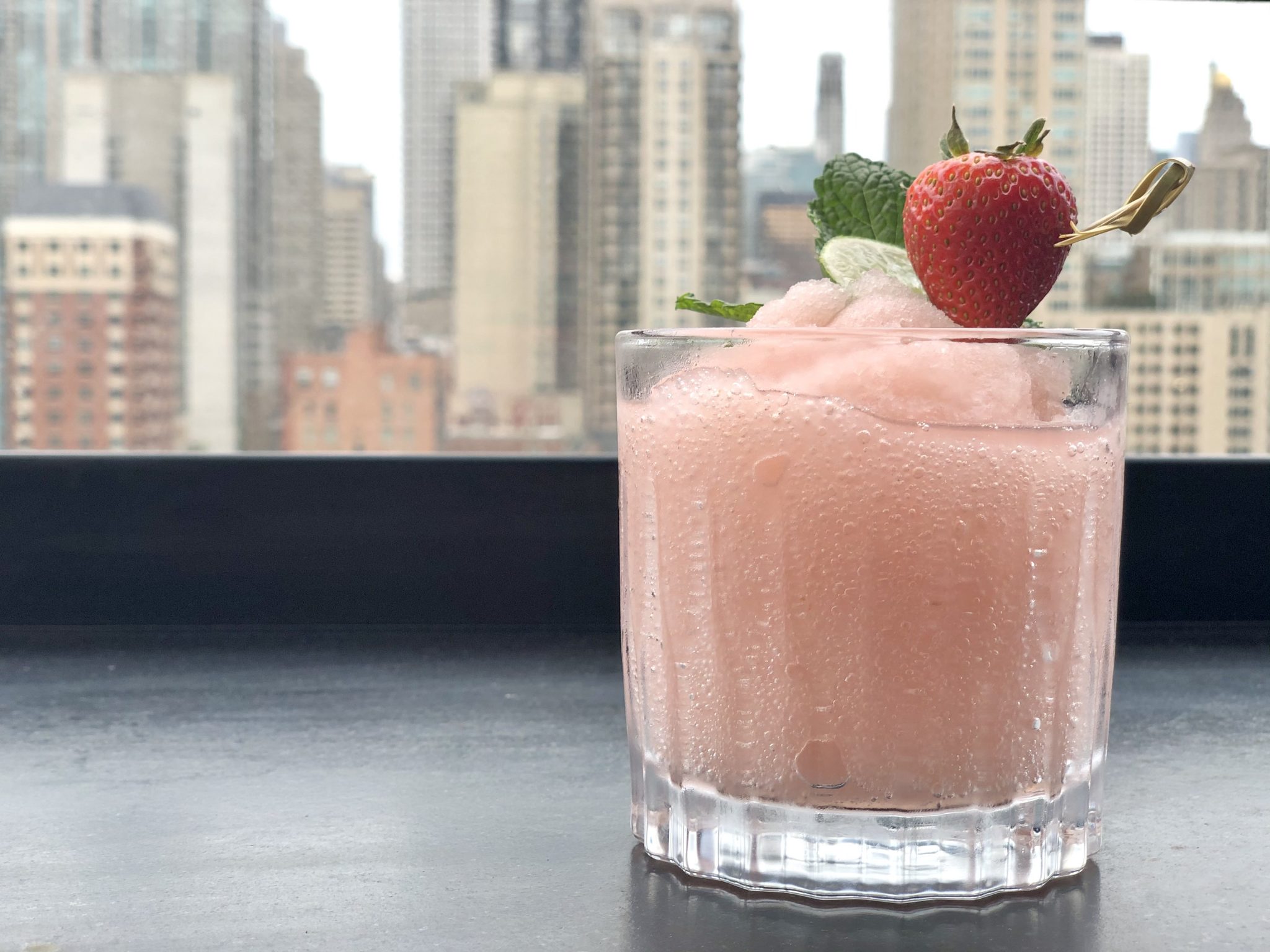 Cocktails at the rooftop bar avec

Art Expositions LLC announces a new annual fair, “EDITIONS Chicago – The Print, Photography & Art Book Fair,” which will run September 23-26 at Navy Pier. EDITIONS is affiliated with International Fine Print Dealers Association (IFPDA) and the Association of International Photography Art Dealers (AIPAD). In-person panels, screenings, performances, digital events, and other initiatives will be presented at Navy Pier but also throughout the city. “EDITIONS Chicago aims to embrace the growing interest and range of limited-edition prints, photographs, multiples, and art books from within and outside of Chicago, securing strong connections with international organizations AIPAD and IFPDA,” EDITIONS writes on their website.

“There are fears over what could happen to a towering stained-glass work at financially troubled Chicago Loop Synagogue and a mosaic at River Grove’s old Guerin Catholic high school,” reports the Sun-Times. “Leaders of Chicago Loop Synagogue say the 92-year-old institution might not last another 18 months unless regular worshippers return,” adds Block Club Chicago.

The Trib touts its first dining review since the hiring of co-food critics Nick Kindelsperger and Louisa Chu: “Once upon a time, we used to publish these things called ‘restaurant reviews.’ Remember those? Well, they’re finally back — check out Nick Kindelsperger’s first! Soul & Smoke operates out of a commissary kitchen, but it’s serving some of the best barbecue around.”

After the debut of Chicago’s second avec restaurant in River North, One Off Hospitality and partners Donnie Madia, Paul Kahan, Eduard Seitan and Terry Alexander have opened bar avec, a 1,200-square-foot open-air rooftop bar on the eighth floor of 640 North Lasalle that seats 110 (eighty under current restrictions). “Inspired by the leisurely style of dining and drinking found at casual seaside diners in coastal Spanish and Portuguese towns dotting the Iberian Peninsula, bar avec takes that charm and combines it with sweeping views of Chicago’s magnificent downtown skyline,” the company says in their release. “The come-as-you-are spot welcomes guests with a delightful reprieve from bustling city life, while a talented all-star team provides a lively and comfortable rooftop setting for anything from quick drinks and bites, day drinking and brunch with friends, or a full dinner under the stars.” The menus have been planned by One Off’s culinary director Perry Hendrix, executive chef Paul Kahan and avec River North’s chef de cuisine Ross Henke. Says Hendrix: “Simple, satisfying food meant to be enjoyed in the fresh air—with plenty of drinks.”

David Roeder talks to five anonymous local leaders and reports back at the Sun-Times over the Tribune Publishing investment perplex: “It’s an open question why, with the Chicago Tribune at a crossroads, no wealthy people from Chicago have stepped up to keep the paper away from Alden [Global Capital]… Sources say anybody who wants a seat at this poker table needs about $250 million… It could appeal to a buyer with an ego or one who wants a national platform, but there the Tribune falls short.” Digital subscriptions are a sticking point; even the ambitious Los Angeles Times presently has far fewer online subscribers than the Washington Post and New York Times. “Without the national scope of the Times or Post, it doesn’t have the revenue potential…  The paper itself has really been in play for a couple of years. Sources say all the usual suspects have been approached — the Crowns, the Pritzkers, Morningstar Chairman Joe Mansueto, Ken Griffin… A younger generation of CEOs, many imbued with the gospel of tech, don’t have the same regard for old school media… Years of upheaval severed the newspaper’s ties with corporate leaders and the North Shore social register.” Plus: not all moneyed men and women crave the spotlight. “Billionaires are most comfortable in the shadows. Any savior of the Chicago Tribune would have their every move and fiscal interest scrutinized”—which happened to Stewart Bainum’s short-lived co-suitor Hansjörg Wyss with a New York Times shot across the bow—”not to mention fielding appeals from newfound friends seeking influence.”

Chicago’s Princess Mysteria Was The 1920s’ Most Radical Advice Columnist

Slate: “Princess Mysteria (Vauleda Hill Strodder), a mentalist (or mind reader) who performed on the vaudeville circuit, wrote the column ‘Advice to the Wise and Otherwise’ for the Chicago Defender from 1921-30. Hill, who represented herself as being of East Indian origin (but who was, according to records, born in Kansas in 1895), appears in historian Julie Golia’s new book, ‘Newspaper Confessions: A History of Advice Columns in a Pre-Internet Age,’ as a fascinating figure within the early-twentieth-century boom in advice writing. The Defender, a prominent Black newspaper with nationwide distribution, hired Mysteria for the job of advice columnist after publishing her correspondence from the road. Because the performer specialized in answering audience questions about the intimate details of their lives—’love, lost money, and illness’—she seems to have made a natural segue into the role of advice-giver.”

At the Reader, Leor Galil writes about the shape of music fest season 2021 as well as once-overs the lineup, which is headlined largely by women performers, including Kim Gordon, Angel Olsen, St. Vincent, Erykah Badu and Phoebe Bridgers. “After 15 months of the pandemic, which many of us spent social distancing or completely isolating,” writes Galil, “the prospect of cramming a season’s worth of festivals into a few weeks feels like stumbling onto a treadmill that’s already running at 20 miles per hour. The CDC’s guidelines continue to be confusing and ill-considered, so that many Americans have little idea how much danger the virus still presents to them… Festivals can of course affect public health, as last summer’s Sturgis rally demonstrated. They’re often huge tourist magnets, encouraging travel—according to a 2013 press release from the mayor’s office, eighty percent of 2012’s Lollapalooza crowd was from outside Chicago.” Tickets and all three days’ full bills are here.

How Are Local, Independent Music Venues Holding Up?

“Without live shows to provide revenue, venue owners, employees, and musicians have all had to hustle day in and day out simply to pay rent,” writes Kendall Polidori at the Reader. “The Save Our Stages Act passed Congress in December 2020 as part of a $900 billion stimulus bill, and it’s supposed to provide around $16 billion to struggling independent music venues, theaters, museums and movie theaters. But months later, Chicago venues have yet to see any of that federal funding… Robert Gomez, owner of Subterranean and Beat Kitchen and cochair of the Chicago Independent Venue League (which represents more than forty local venues), reminds the SBA that his entire industry ground to a halt last year—and that support has to include timely action to be meaningful.” “Chicago’s independent music venues, along with venues across the country, acted responsibly by closing their doors during the pandemic,” Gomez tells Polidori. “We are counting on the SBA as the consequences for our businesses become more dire each day.”