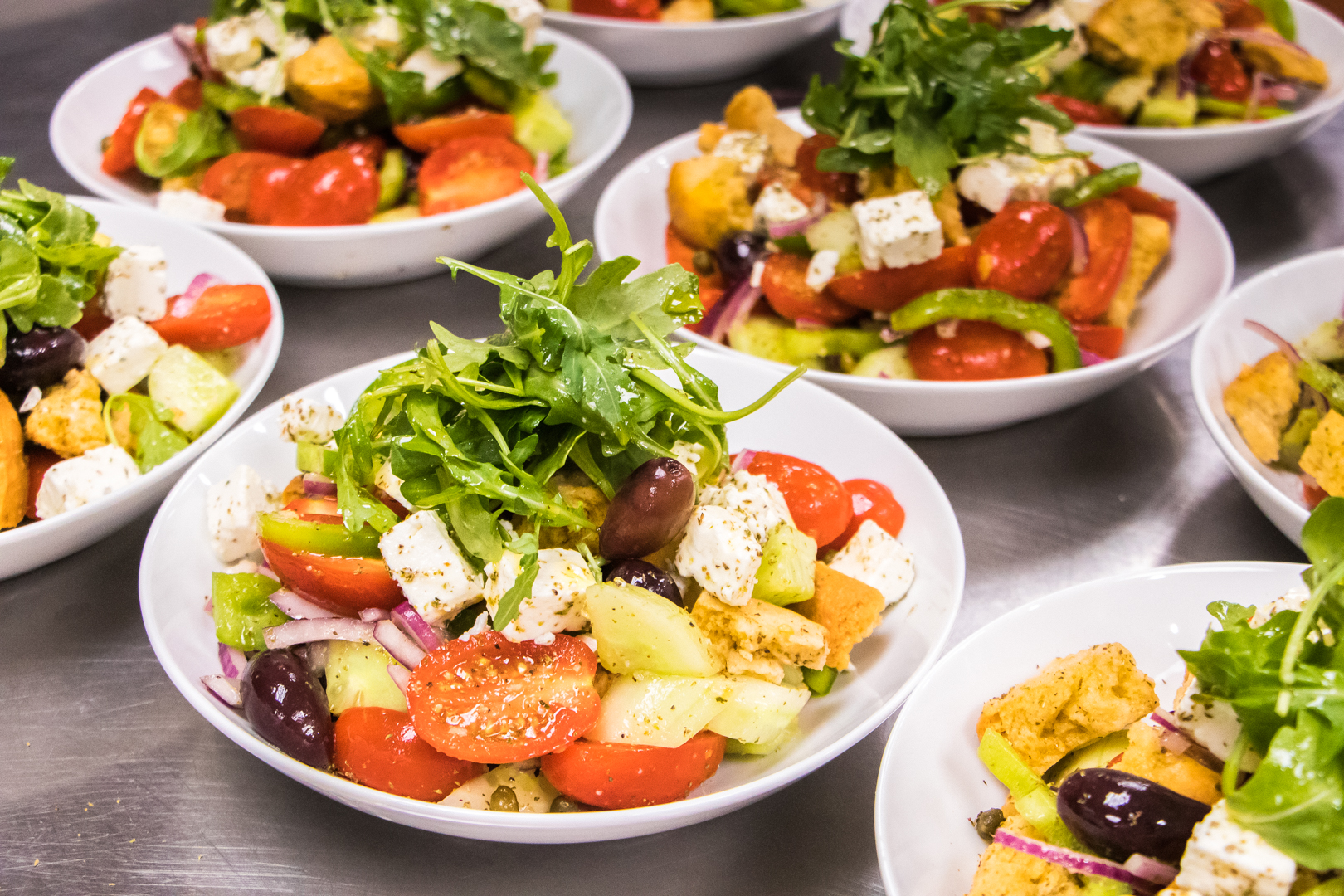 Greek salads at Avli on the Park

“The official presidential portraits of Barack and Michelle Obama are leaving Washington for the first time and making a stop at the Art Institute,” reports Block Club Chicago. “Michelle Obama’s hometown and the former president’s adopted hometown is the first stop for the portraits, which hang in the Smithsonian’s National Portrait Gallery.” The Art Institute will display the paintings June 18-August 15 and plans a range of events during that time.

Theaster Gates will create the 2022 Serpentine Pavilion in London, the first non-architect to get the annual commission for a temporary building from the Serpentine Gallery in its twenty-one years, the Architects’ Journal (UK) reports. “The Serpentine Gallery told the AJ it was too early to discuss Gates’ plans for next year’s pavilion but said it was ‘very excited’ to be working with him.”

Gregg Bordowitz, Arnold J. Kemp and Lynne Tillman will discuss the book, “Eat of Me: I am the Savior,” this Sunday at 4pm Central time. (Zoom link.) The “False Hydras” exhibition is Kemp’s first solo presentation in Los Angeles and contains recent photography, print and sculpture works “that consider the refraction of biographical narrative through social signifiers such as race and gender,” L. A. nonprofit space JOAN relays in a release. “An artist, poet and educator, most recently as Dean of Graduate Studies at the School of the Art Institute of Chicago, Arnold J. Kemp has been making and exhibiting critically engaged art about race, sexuality, appropriation, and authorship for the past twenty-five years. While often described as an artist’s artist, Kemp has found his greatest kinship with writers, specifically those affiliated with the New Narrative movement out of San Francisco.” Further details here.

“It is with the spirit of philoxenia (a welcoming of strangers and an eagerness to show hospitality); meraki (putting the best of one’s self into work); and kefi (living life joyfully) that Avli announces the opening of its fourth and flagship restaurant, Avli on The Park—a Mediterranean-focused venue in the Lakeshore East neighborhood,” Avli announces in a release. It’s located in the former III Forks space at 180 North Field, where the Chicago River meets Lake Michigan.”Avli will be an airy, comfortable but elegant, 13,000 square-foot modern Greek taverna. Features include cozy two-sided stone fireplaces, a colossal U-shaped bar, and breathtaking views of Lakeshore East Park from sweeping floor-to-ceiling windows. A spacious outdoor roof deck with heated cabanas will afford diners with luxurious year-round comfort.”

After two-and-a-half years in the West Loop, contemporary Japanese Michelin-starred tasting menu restaurant Yügen on Randolph announces its closure, with the last day of service on Saturday, May 29. “Chef Katsumura will be taking time to focus on personal needs, which the executive team wholeheartedly supports, acknowledging that it is much more important than business,” the restaurant relays in a release. “Albeit a difficult decision, the team at Yügen is recognizing the incredible culture they’ve built, standing together, supporting each other, and celebrating all they’ve accomplished as they exit together tastefully.” The executive team is planning a new, future establishment. (The word “Yügen” represents an evocative concept in the Japanese language, meaning “the power to conjure indescribable appreciation for the simplicity of beauty.”)

“Restaurants and bars desperate for a lifeline swarmed to apply for a new government grant to help them pay for rent, utilities, supplies and payroll,” reports the Los Angeles Times. “In just ten days, the Small Business Administration has received 266,000 applications asking for $65 billion in aid, more than twice the amount provided by Congress. Industry lobbyists and activists, who spent a year begging Congress for help before lawmakers acted earlier this year, are already asking them to replenish the fund and keep local, well-loved restaurants afloat as the economy begins to recover. Joining their call is a bipartisan group of representatives and senators already working to persuade colleagues to put more money in the fund.”

Chaz Ebert reports on the in-person and hybrid events coming in 2021, including the dates for the Chicago International Film Festival, which will be October 13-24. “We’re planning for a hybrid edition of our festival that will combine the best from the traditional in-person festival experience with the many positive outcomes and increased accessibility from the online and outdoor/drive-in screenings from last year,” Mimi Plauché, artistic director, tells Ebert. “The different components will all take into account the most up-to-date safety protocols to ensure a fun, memorable, and safe experience for all of our audiences.”

At the Reader, Rebecca Aizin talks to independent bookstore owner Nina Barrett about her lawsuit versus the omniconglom Amazon. “Independent bookstore owner Nina Barrett has a lot on her plate—or actually, her bookshelves. Seven years ago, Barrett, 60, and her husband, a librarian, opened Bookends & Beginnings by the Northwestern University campus in Evanston, and now, just after a recent expansion of the store, she’s the single named plaintiff of a class action lawsuit against Amazon,” Aizin reports. “The lawsuit, filed last month, said Amazon colluded with ‘Big Five’ publishers in a price-fixing scheme that limited competition.”

“As [Lightfoot] reaches her two-year midway point as mayor, her spokeswoman says Lightfoot is granting 1 on 1 interviews – only to Black or Brown journalists,” NBC5’s Mary Ann Ahern tweeted Tuesday. Gregory Pratt: “I am a Latino reporter [at the Chicago Tribune] whose interview request was granted for [Wednesday]. However, I asked the mayor’s office to lift its condition on others and when they said no, we respectfully canceled. Politicians don’t get to choose who covers them.” Carol Marin: “Greg Pratt gets it right. As usual. It’s a very good lesson for our journalism students to learn. Public officials don’t get to pick their reporters. And reporters need to stand up for fellow reporters. Thank you, Greg.” WGN anchorman Dan Ponce: “Agreed, Mr Pratt.”

The Lolla In Full

Lollapalooza announces its 165 attractions for the July 29-August 1 weekend across eight stages in Grant Park to celebrate thirty years of the festival. Top of the bill are Foo Fighters, Post Malone, Tyler The Creator, Miley Cyrus, DaBaby, Marshmello, Illenium, Journey, Megan Thee Stallion and Roddy Ricch. “In accordance with current local public health guidance, full vaccination or negative test results will be required to attend Lollapalooza 2021. For patrons who are not fully vaccinated, a negative test result must be obtained within twenty-four hours of attending Lollapalooza each day. Details on the festival entry process will be available in early July.” Tickets, if any are left, are at lollapalooza.com. “Still wanna know how Naperville is canceling RibFest from an abundance of caution, but Lolla, etc are on full speed ahead,” tweets the Tribune’s Kevin Williams. “Lolla logistics are interesting. Will almost certainly lead to looooong entry times at peak hours. Wonder if N’Ville couldn’t/wouldn’t adopt such a policy?”

“Lyric Opera of Chicago promises thrilling music, captivating stories, world-class singers, and exciting productions” that went on sale by subscription early Wednesday evening, the Lyric announces in a release. “Lyric welcomes Enrique Mazzola as its new music director; invites audiences to experience the more accessible configuration of brand-new seats in the Lyric Opera House; welcomes The Joffrey Ballet as the ballet company-in-residence; and offers a new Lyric production as season-opener, six new-to-Chicago productions and one special concert. Lyric remains fully committed to the health and safety of the entire Lyric family and has made slight adjustments to the audience experience with this in mind, including shortened opera running times and offering virtual streams for ticketholders.” The season’s listed here.

“This has been a year of great planning, introspection and change for the theater industry. It is so exhilarating to see theatre companies gear up for live, in-person performances again,” executive director Deb Clapp says in a release. “The industry is watching CDC guidelines for safety and, as more theatres announce opening plans, we look forward to gathering together again soon.” For a comprehensive list of both virtual and in-person Chicago productions, visit the League of Chicago Theatres websites, ChicagoPlays.com and HotTix.org.

Steppenwolf Prepares The Loft For Lift-Off

Steppenwolf Theatre Company has announced initial programming details for The Loft, its dedicated education space that takes up the entire fourth floor of Steppenwolf’s new Arts and Education Center, designed by architect Gordon Gill of Adrian Smith + Gordon Gill Architecture. “Kicking off with a virtual Loft program series this summer and opening to students and educators in the fall, The Loft will inspire the next generation of theater participants, expanding the reach of Steppenwolf’s education programming from 20,000 students to 30,000 annually. The Loft includes three dedicated learning spaces for young adults and will feature an expanded range of in-person and digital programming for students and community, as well as showcasing artwork created by Chicagoland youth selected through the Loft Teen Arts Project.”

The Chicago Cultural Center will reopen to the public June 2, with the exhibitions “Jeremiah Hulsebos-Spofford: League of Nations” and “what flies but never lands”; “Chicago: Where Comics Came to Life, 1880–1960” will open June 19. “Visitors will also be greeted with new visitor amenities including a reimagined Welcome Center and Learning Lab — and Buddy, a shop created with the Public Media Institute to give Chicago’s artists and small manufacturers a place to showcase and sell their goods and artwork,” the Cultural Center says in a release. Further information here.