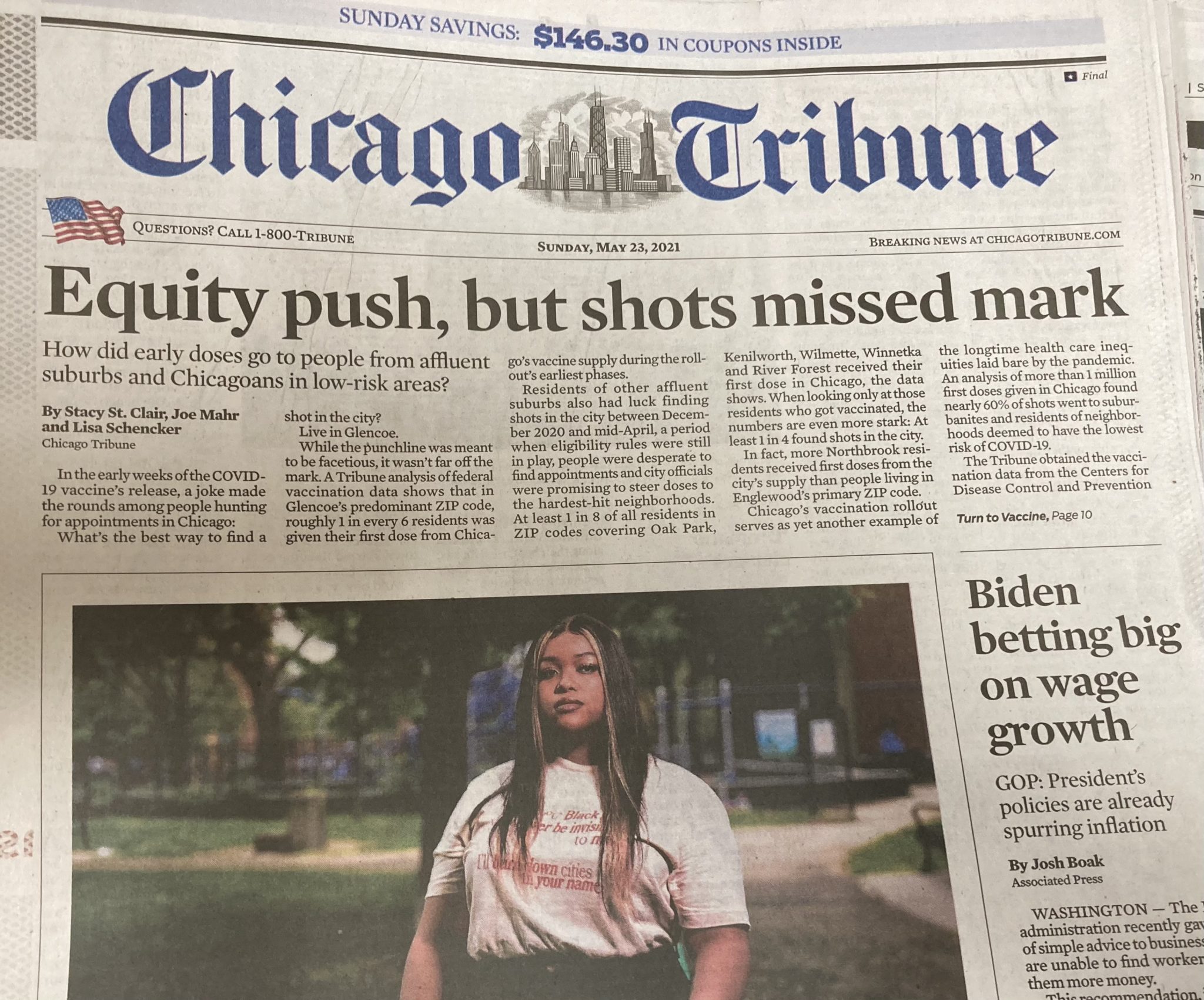 The first Pullman neighborhood residential development in sixty years is open, after an $18 million investment. “A collaboration of nonprofit groups worked to rehab two long-vacant 1880s buildings at 11137-49 South Langley Avenue that are on the National Register of Historic Places,” reports Block Club Chicago. “A new, 32,000-square-foot building was constructed between the two, creating a complex now called the Pullman Artspace Lofts.”

Vaccine Shot Could Be Poured

Representative Mike Zalewski of Riverside has proposed that bars and taverns be allowed to offer customers a free alcoholic drink with proof of vaccination. He’s also working with the Illinois Liquor Control Commission to file an emergency rule or guidance, reports WGEM. “We really do think this will be managed by the licensees,” Zalewski told the station. “He stressed this won’t create ‘COVID-19 happy hour’ since the bill only allows a promotion with one free drink. The proposal passed unanimously out of the House Executive Committee [and] heads to the House floor.”

Chef Brian Jupiter will host the James Beard Foundation’s Summer Taste America culinary series at Frontier on Tuesday, July 13. Taste America will have in-person events in ten cities nationwide, bringing chefs and diners together to once more safely celebrate local independent restaurants and build support for industry recovery in the aftermath of the pandemic. Tickets are available by the pair at $300, here.

Eater Chicago reports on ways that the hospitality industry hopes to entice workers back into their workforce. “As the pandemic has laid bare, restaurant workers consistently faced harassment and untenable hours for low wages, all without a safety net in the form of benefits or career advancement. Perhaps job seekers are still not lining up because a $50 interview bonus will not protect against customer harassment; $1,000 after three months won’t pay for childcare; and free mozzarella sticks are not equivalent to affordable health insurance. As one restaurant employee told Eater, the real incentivizing will be to ensure restaurant workers, post-pandemic, feel secure: ‘What can we do to make it so the people who provide food are not constantly, no matter how much they work, on the thinnest ice in the world?'”

Tuesday night via Zoom, Conversations at the Newberry presents Abraham Zapruder’s granddaughter Alexandra Zapruder and University of Chicago professor Jacqueline Stewart using the most famous home movie in American history, the twenty-six seconds and 486 frames of Zapruder’s 8mm footage of the assassination of John F. Kennedy at Dealey Plaza in Dallas, Texas. The pair will look at “the connections between home movies, family history, and difficult memories, as well as the emergence of citizen journalism.” Tuesday, 5pm, details here.

… to the surprise of few, the dismay of most. Columnist Mary Schmich: “We just received the official TribPub press release confirming the sale of the company to Alden. It notes that 81.28% of the shares held by non-Alden stockholders voted to approve the merger. I’d like to thank the other 18.72 percent. They are going to heaven.” Ann Marie Lipinski: “Chicago is a city that rebuilt itself after destruction by fire yet it can’t save its newspaper. What a dark day.”

At Jeff Bezos’ Washington Post, media columnist Margaret Sullivan’s column about the deal for the still-profitable newspaper group is headlined “America’s rich people could have saved local journalism — and perhaps democracy. They refused,” and is captioned, “There’s a healthy population of plutocrats along the shore of Lake Michigan, but none lifted a finger to buy the Chicago Tribune and keep [the Orlando Sentinel; the Baltimore Sun; the Hartford Courant in Connecticut; the South Florida Sun Sentinel; the New York Daily News; the Capital Gazette in Annapolis; the Morning Call in Allentown, Pa.; the Daily Press in Newport News; and the Virginian-Pilot in Norfolk] out of the hands of a job-slashing hedge fund.” “‘Chicago’s wealthy class failed the city by refusing to rescue the Chicago Tribune from a hedge fund,’ wrote Mark Jacob, a former Tribune editor. ‘A newspaper is both a watchdog and a binding agent. The weaker the media, the more inequitable a city is allowed to be. Rich Chicagoans sent a signal that they do not care.’”

At PBS Newshour, David Folkenflik shorthands what’s at stake: “You eliminate the ability of reporters to cover City Hall, to cover great corporate actors, cover sophisticated figures whose decisions have great implications for the lives of your audience and people in your region. If you no longer have enough journalists and give those journalists enough time to do the reporting, to figure out and then explain what’s going on in the communities around them.”

The Tribune’s Chris Jones is nonplussed by the technicalities offered on Friday by Los Angeles Time owner Patrick Soon-Shiong, who holds a twenty-four percent stake in Tribune, as part of his claim that he “abstained” from voting, as it has been a passive investment. “As with most carefully calibrated abstentions, decisions made with knowledge of the likely outcome, this one was no different at all from a vote for Alden.” Block Club Chicago senior editor Dawn Rhodes, formerly with the Trib: “Coward. There is no way to spin this. Utterly spineless.”

Tribune Columnist Rex Huppke held a Friday evening Twitter valediction: “I can’t be bothered with people who view newspapers as businesses to be squeezed for profit, or as disposable investments. None of us got into this to make money. We got into it because we have the unshakable ailment of giving a damn about the world around us and wanting to find ways to make it better, in whatever small way we can. Some do it through investigations that quite literally save and change lives. Some do it through features that enlighten and inform. Some do it with surgical editing skills, some do it from behind a camera, or by covering beats like hawks. Some do it by making readers laugh, or think, or cry. It’s the sum of all those parts that makes a newspaper great, and the desire to do such things can’t be dictated by hedge funds or feckless billionaires who lack the courage to take a stand. So we will work. And we will continue to do our very best for our readers and our communities. And we will fight like hell, and as one, against anyone who puts dollar signs above democracy. Because, at the end of the day, this is what we do.” Former Tribune Architecture critic Blair Kamin: “May 21, 2021–a day that will live in infamy in the history of The Chicago Tribune and American journalism.” Mother Jones editor-in-chief Clara Jeffery: “What a wasted opportunity to save journalism.”

The TRiiBe’s Interview With The Mayor

The TRiiBe presents “an abolitionist’s midterm conversation” with the mayor: “On national news, Lightfoot presents herself as a progressive queer Black woman—but does she truly understand the Black liberation struggle?” … “When Mayor Lightfoot entered the room, she was impressed by my Air Jordan 1 Retro High OG ‘Dark Mocha’ sneakers. And I couldn’t hide my delight to see her in a well-fitting and cute suit. Lightfoot’s suit choices have been a running joke on Black Twitter, and although I’m a critic of the mayor’s politics, I had to let her know that the suit was giving what it was supposed to give.” Bella BAHHS asks Lightfoot the questions; Lightfoot dances. Late in the piece: “By this point, revolutionaries, I was livid. I wanted to walk out… I couldn’t believe that she was sitting in my face telling me that we should not abolish qualified immunity because it will make policing a less attractive job. But I had an interview to finish… I left City Hall thinking that having a mayor who isn’t afraid to have a pro-Black journalist day is nice, but having one who implements pro-Black policies that we could benefit from every day would be better.”

Black Journalists MIA At The Top

“Black journalists are still largely MIA from nightly national newscasts as anchors, mostly invisible on editorial boards and as news directors of television networks,” writes John W. Fountain at the Sun-Times after the Mayor’s kerfuffle-cum-stumble about excluding journalists from interview availabilities, something Mayor Lori Lightfoot pointed out to a lot of people’s chagrin. “She didn’t lie, though she clearly stepped on toes. Dear Mayor Lightfoot, Thank you, for acknowledging the decades-old journalism elephant in the room. Black journalists’ perspectives, insights and ideas remain sparse on the daily platter of American journalism. This despite the Kerner report’s recommendation long ago that news media hire, promote and retain reporters and editors of color. This amid the perpetual lie that, ‘We can’t find talented journalists of color.’ Truth is, I never wanted to leave Chicago. But to achieve my journalistic dreams, I had no other option. It’s simply my journey of reporting while Black.”

“Because of the sacrifice of so many Chicagoans, we are but once again safely gathered and will literally flip the switch on our iconic summer Chicago,” Mayor Lightfoot said before the fountain was turned on, reports the Tribune’s Paige Fry. “When Buckingham Fountain roars back to life, just know it is also a symbol of our city roaring back to life.” The event was livestreamed as a promotion on ComEd’s Facebook page and began with remarks from WGN weatherman Tom Skilling before the switch was hit by the winner of a sweepstakes sponsored by the electric utility.

Illinois Humanities is accepting applications to distribute more than $1 million to Illinois cultural institutions affected by the pandemic. The funding will help Illinois’ critical humanities and cultural nonprofits survive during the ongoing crisis. The funding is provided by the National Endowment for the Humanities as part of the $1.9 trillion American Rescue Plan Act. The grants range from $5,000 to $10,000, aimed to provide general operating support for humanities nonprofits as well as humanities-based project grants. Nonprofit organizations based in Illinois with annual budgets of $2 million or less are eligible to apply. The application deadline is July 15, 2021. Details are here.