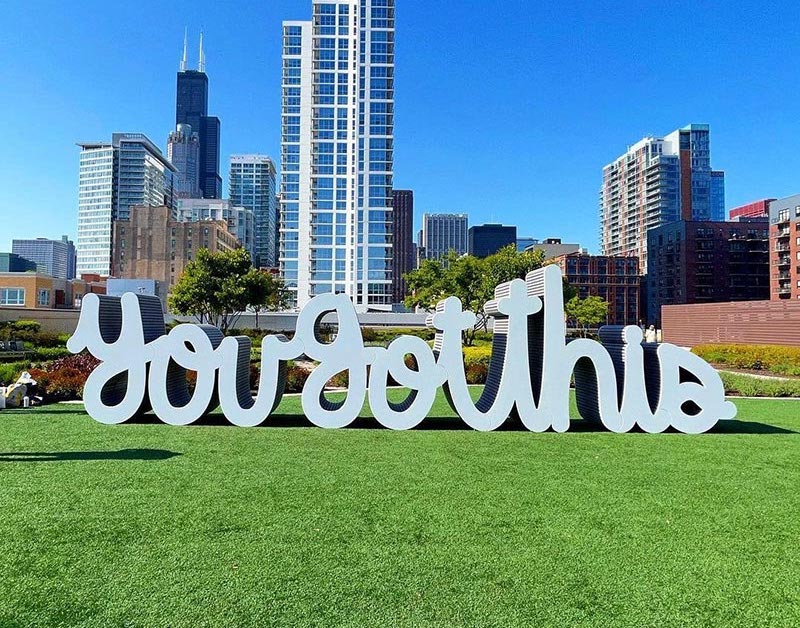 Matthew Hoffman Says “You Got This” In South Loop

Matthew Hoffman (Newcity Design 50 Hall of Fame), best known as “custodian” of the ubiquitous “You Are Beautiful” sentiment, completes a permanent piece: “What an incredibly beautiful day to finish this permanent installation at Roosevelt Collection Shops in the South Loop. It gives me hope that better weather & better days are ahead!” Hoffman posts on Instagram, along with an image of the twice-human-sized words, “You Got This” styled as handwriting in white against the grass and landscape and sky. The message, Hoffman says, “helps celebrate Mental Health Awareness Month.”

Hundreds of Protest Plywood Storefronts Will Be On Show In Minneapolis, New York and Chicago

“Memorialize the Movement” will be exhibited in multiple American cities, Maya Salam reports at the New York Times. “[I]t’s so important that they be preserved,” Leesa Kelly, the New York organizer said. She “had little connection with the arts world before this project,” writes Salam. “Because this is Black history, and not just Black history, it’s American history.” “Motivated by a similar impulse, other groups in New York and Chicago are also gathering and transforming these symbols of unrest into objects that bear witness to a staggering year — hoping to answer the question, in their own ways, of how to memorialize what their cities endured while stitching together a national portrait.”

CTA To Dust Off 125 Facilities This Year

“The CTA launched a new strategy in that department, announcing ‘Refresh & Renew,’ a program to deep-clean and upgrade ninety percent of rail stations,” reports John Greenfield at Streetsblog Chicago. “Throughout the pandemic, our number one goal has been to provide our customers and employees a safe, clean and healthy travel environment,” CTA President Dorval R. Carter, Jr. says in a statement. “’Refresh & Renew’ is our way of rolling out the welcome mat for our returning riders. Clean and well-maintained stations are an important part of our commitment to providing a comfortable transit experience.”

Signs of some times: Bill Savage sights a graffiti mural of “Mayor Richard M. Daley’s smug mug being removed by the city’s own graffiti blasters.” Bonus: sign for eternal parking meters in the foreground.

Architectural Digest offers a tour of the Detroit home of Melanca Clark and her husband, Moddie Turay, with its museum-level collection of works by Black artists. “As the daughter of abstract expressionist painter Ed Clark—one of the most notable African American artists of the twentieth century, who died in 2019—she takes great pride in showing off his ‘never-for-sale’ pieces. There’s also an impressive array of works by the elder Clark’s artist friends including Beauford Delaney, Herbert Gentry, Sam Gilliam and James VanDerZee. ‘The art for us is what makes our home.'”

“On a leafy block of well-appointed townhouses,” reports The Real Deal, “two connected 1870s-era buildings stood out. They were once workers’ cottages that became a dairy, then a 5,400-square-foot private home when Deborah and Ron Clarkson bought the property around forty years ago.” What happened to the two buildings and the triple lot? Megamansion, maybe. “A year after it was sold for $5.85 million, the property at 1820 North Howe is again on the market… The pair of 150-year-old homes that once stood there have been demolished. The owners who bought the triple lot in Lincoln Park last May have reconsidered their plans to build a mansion… It is being listed for $6.75 million, about $1 million more than what they paid in May 2020… The 77-foot property allows for a home of up to 15,500 square feet.”

Nick Kindelsperger checks in with Jenner Tomaska and Katrina Bravo, formerly of Next, about their next moves this summer, with Esmé in Lincoln Park. “Esmé means beloved,” Tomaska tells Kindelsperger of the French word. “It’s our love letter to Chicago, our way of giving back and saying thank you. We’ve been fortunate to be successful, and that’s the reasoning behind it. I love the hospitality world, but is just opening another restaurant enough?”

“This is a wish come true,” Chicago Japan Film Collective co-founder Yuki Sakamoto, tells the Reader of what is reportedly the first-ever Japanese film festival held in Chicago. The virtual festival runs from May 25-May 30.

New York Times’ media columnist Ben Smith weighs in on the Alden Global Media-Tribune Publishing deal from Back East: “There’s an alternate history where Trib management makes better decisions, invests in journalism & product, & the Trib is a competitive national brand — maybe right of center, more Midwest focused than NYT/WaPo. It’s a huge missed opportunity, and no reason you couldn’t do it now,” to which the Trib’s Chris Jones tweets back: “We don’t need to be right of center. Straight center would work just fine.”

Is Alderman Standing In Way Of Muddy Waters Museum?

Ald. Sophia King continues to create obstacles for the Muddy Waters MOJO Museum, the museum says in a release, as well as Waters’ great-granddaughter Chandra Cooper. The Muddy Waters home was on its way to a landmark nomination at the June 3 Commission on Chicago Landmarks meeting, but that decision was “disrupted” by Ald. King, who insisted that the home be pulled from the agenda. The National Trust for Historic Preservation awarded the MOJO Museum a $50,000 grant from its African American Cultural Heritage Action Fund and a nonprofit was formed to oversee development and operations. The group reports no difficult contractors, rising costs, or even complications because of the pandemic. “I’m calling on everyone around the world who has been influenced by my great-grandfather Muddy Waters to help us put a stop to this unfounded interference coming from Ald. King’s office,” Cooper says now. “My great-grandfather loved the city of Chicago, the culture and its people. This great city inspired his music and helped him to [affect] the world with his talent. He would be very proud of what we have accomplished and what we are working to do in his honor.”