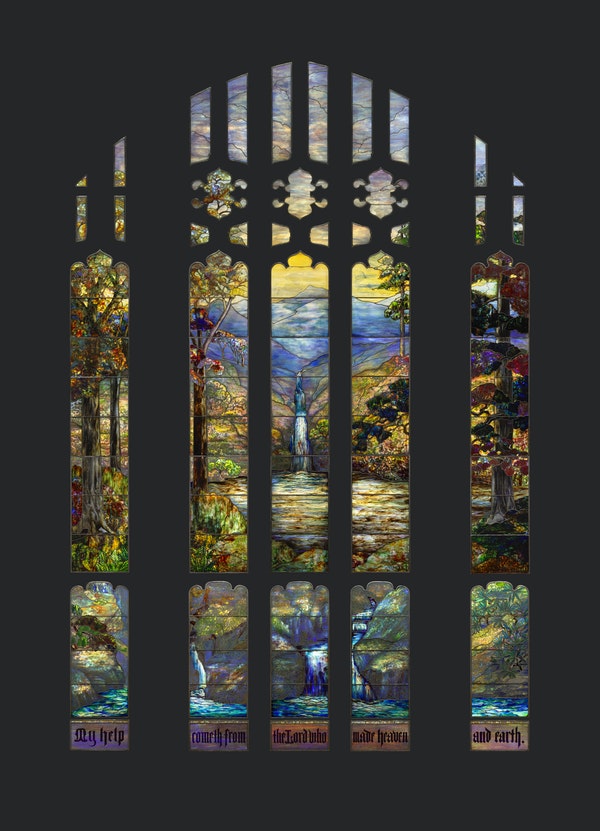 The Hartwell Memorial Window, “A stunning achievement in stained glass,” made its Art Institute debut this week. “With dazzling light and vibrant colors, the window captures the sublime beauty of nature, depicting Mount Chocorua, one of New England’s most beloved peaks, at sunset,” the museum announces. “This recently acquired work—designed by Agnes F. Northrop for Tiffany Studios—was a commission from Mary Hartwell in honor of her husband for the Central Baptist Church of Providence, Rhode Island. Located at the top of the Art Institute’s Grand Staircase near the Michigan Avenue entrance, the magnificent Hartwell Memorial Window will greet visitors with radiant beauty for many years to come.” The 1917 “window is composed of 48 panels that are each made up of different glass types and combinations. Inspired by the view from Frederick Hartwell’s family home near Mt. Chocorua in New Hampshire, the majestic scene captures the transitory beauty of nature—the sun setting over a mountain, flowing water, and dappled light dancing through the trees—in an intricate arrangement of vibrantly colored glass.”

“It’s not a waste of space, it’s a celebration of space,” says the late James R. Thompson in Nathan Eddy’s prize-winning sixteen-minute advocacy short “Starship Chicago” (2017), on Vimeo. “Despite initial construction flaws and hefty refurbishment costs, this singular architectural vision of an open, accessible, and inspiring civic building—defined by its iconic, soaring atrium—remains intact. Chicago preservationists are gearing up for a major battle to save the city’s most provocative architectural statement.” (Other interviewees include Helmut Jahn.)

1916 Andersonville Home To Be Demolished For Condos; Bronzeville’s The Forum Will Be Restored

City Council has approved the demolition of an Andersonville home on North Ashland for a building with four condos that will cost $600,000-$700,000 each, reports Block Club Chicago. Also from Block Club: Bronzeville’s The Forum, “once the Epicenter Of Black life In Chicago,” gets city council approval to restore the nineteenth-century edifice on East 43rd. “The change to commercial zoning boosts an ongoing redevelopment aiming to provide a banquet hall, retail and restaurant space… Entrepreneur Bernard Loyd pouring his own money into remediation and repairs. Loyd, who owns Urban Juncture, launched a crowdsourcing campaign late last year… raising less than half of the $50,000 goal… It will take at least $20 million to bring The Forum back into operation.”

For the three days leading up to its June 7 reopening, the Sheraton Grand Chicago will host the world’s largest game board on its facade. Continuing its play with window designs of the past year, the hotel’s south-facing windows along the river “will light up with three unique designs” at dusk each evening. “Each design will add together to create a hidden three-word riddle, which Chicagoans can decode on June 6 with the lighting of the third and final design. Once guests figure out the answer to the word puzzle, the first person to submit the correct answer via the Sheraton Grand’s website will win an exclusive overnight stay in the 2,408 square-foot Presidential Suite.”

Fran Spielman writes that reaction to Mayor Lightfoot’s stealth proposal to shut down package liquor sales at 10pm has gotten her attention. Business Affairs and Consumer Protection Commissioner Rosa Escareno told the Sun-Times, “I’m not gonna predict where we land. But it’s definitely gonna be a dialogue and a conversation… I embrace what they’re telling me… But we have to make the issues that our residents are bringing us… central to this conversation.” Lightfoot, at a separate news conference, said she wanted to “reach an accommodation,” but small business owners have “got to… be better actors in these communities. Nobody should suffer because of liquor sales that stretch into the early morning hours that then become a real magnet for problems in neighborhoods.” Downtown Alderman Brendan Reilly: “My preference would be to use our administrative tools to crack down on bad actors and… perhaps, negotiate on the closure hour.” Spielman quotes Pat Doerr, managing director of the Hospitality Business Association of Chicago cautioning against changing “the character of our city known worldwide… There’s a Frank Sinatra song about Chicago — that toddling town Billy Sunday can’t shut down. That is the character of our city. We are not Wheaton.” (Three examples for offhanded comparison: Normal, Illinois sales hours are until 1am most nights; Wheaton, 10pm; and Utah’s state-owned liquor stores in Salt Lake City are open until 1am.)

The American Royal Association announced its 2021 class of inductees to the Barbecue Hall of Fame: Ollie Gates, Rodney Scott and Chicago’s Meathead Goldwyn. The induction ceremony will take place on Saturday, September 18 during the 2021 American Royal World Series of Barbecue at the Kansas Speedway. Election into the Barbecue Hall of Fame is barbecue’s top honor and recognizes the significant contributions to the advancement of barbecue. Goldwyn has reached over fifteen million people since 2016 with barbecue and grilling information through AmazingRibs.com. “Meathead, The Science of Great Barbecue and Grilling,” made the New York Times Best Seller List along with top ten lists at Amazon, BBC, the Tribune, Wired and Epicurious. “Along with his team, Meathead has explained how grilling and barbecue work from a scientific standpoint to an audience in the millions. He was the first to explain the cause of The Stall, and the complete science behind the Smoke Ring as well as create an innovative curing calculator, salt conversion calculator and has debunked numerous old husband’s tales surrounding barbecue.”

Kevin Clark, thirty-two, who played drummer Freddy “Spazzy McGee” Jones in 2003’s “School of Rock,” was struck and killed while biking at a notoriously dangerous intersection on the 2600 block of North Western at 1:20am Wednesday morning, reports the Sun-Times. “Kevin was a beautiful, beautiful soul, who lived every moment,” Clark’s cousin Matthew Portman said. “He was all about being present and enjoying what he had. He had a simple and beautiful life.” Jack Black remembers Clark on Instagram; over 1.5 million viewers had “liked” Black’s post by early afternoon Thursday. “His most recent project was the band Jess Bess and the Intentions. ‘They were unbelievably fantastic and they would’ve gone somewhere,’ his mother said.”

Non-union newsroom employees have already been offered buyouts after the $633 million acquisition of Tribune Publishing, reports Robert Channick at the Trib. “Tribune Publishing is required to negotiate any buyout offers for union newsroom employees directly with the local guilds that represent them, according to Jon Schleuss, president of the NewsGuild-Communication Workers of America, whose local chapters represent the Chicago Tribune and other Tribune Publishing newsrooms… Alden completed its purchase of Tribune Publishing late Monday [and] immediately saddled the formerly debt-free Tribune Publishing with two loans totaling $278 million, removed CEO Terry Jimenez and installed Alden President Heath Freeman to lead the company, [now] the second-largest newspaper owner in the U.S. behind Gannett.” NPR media correspondent David Folkenflik: “Union members at multiple Tribune newspapers say they’re told Alden Global Capital intends to seek voluntary buyouts company-wide. Alden just loaded Tribune with $278 million in debt for its $630+ million acquisition. Imagine layoffs ensue if buyout goals not met. $60 million of that debt carries a 13% rate – it was borrowed from Media News – Alden Global’s other newspaper division.” The Morning Call received its buyout offers on a letterhead emblazoned with “Local Newspaper Logo,” which elicited this response from their Guild: “Clearly our new owners are in a rush. We are The Morning Call. Not ‘Local Newspaper.’ We would also like to remind our new owners — and more importantly our members — that this offer is subject to bargaining.”

Getting around the city can be simpler and cheaper this summer: one-day passes are temporarily reduced to $5; three-day passes $15; and for a full week, $20. That’s a twenty-five percent savings, reports Time Out Chicago.

“Airbnb said last week that until further notice, it is imposing a global ban prohibiting gatherings of more than 16 people, including overnight guests and visitors, regardless of host authorization. In addition, no disruptive parties or events are allowed,” reports WGN-TV.

In Search of Dese, Dem and Maybe Dose

Edward McClelland seeks “the classic Chicago accent” in Beverly for Chicago, looking at recent research on the flight of local lingo.

“If the state’s 2019 law to legalize recreational marijuana stacked the deck in favor of wealthy business owners who already had a foothold in the industry, a  measure approved in the House would reshuffle that deck to give minority business owners a stronger chance to break in,” WGN-TV reports. Representative LaShawn Ford (D-Chicago Heights) told WGN, “There are zero Black owners in the cannabis industry today or Brown, or majority white woman. I’m not surprised, because when the bill was written, the industry helped write it. They knew exactly how they would be at an advantage.” Ford’s measure, House Bill 1443, was approved 70-33.