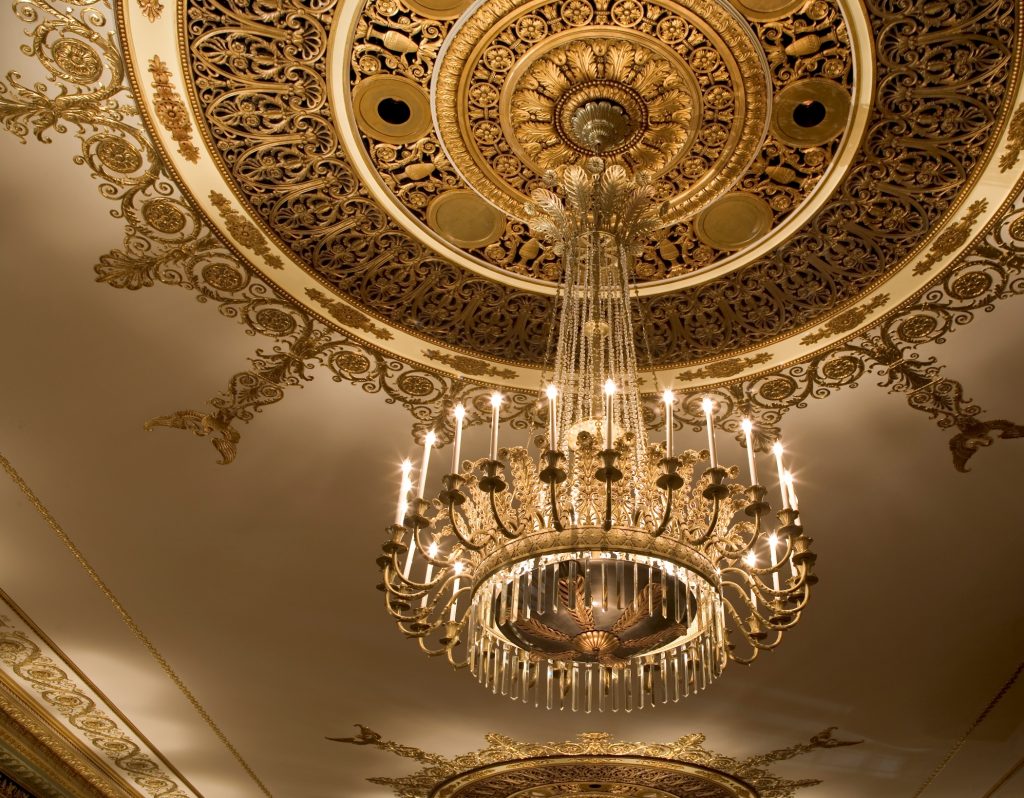 The reopening of the Palmer House will coincide with its 150-year anniversary, allowing it, as Hilton Hotels says in a release, “to continue its legacy as the most iconic and famed hotel in North America.” Reopening a grand hotel  is no easy task, Hilton Hotels relates. “‘The team at Palmer House vacuumed over four miles of carpet, changed 10,000 light bulbs, and for the first time, filled 14,600 gallons of water into our new swimming pool.’ said Dean Lane, area general manager, Palmer House, a Hilton Hotel. ‘We have faced the most challenging year for the travel industry and Chicago community, but in the face of adversity, Palmer House has continued to rise like a Mythological Phoenix, allowing our legacy as one of the most iconic hotels in Chicago to live on.'”

“I could fill ten columns with tales from Melman’s restaurants — his Lettuce Entertain You Enterprises has some 120 in Chicago and nine states,” writes Neil Steinberg at the Sun-Times. “I can still see my 18-year-old self, piling a Ritz cracker with the salty black caviar from the salad bar at Fritz and just staring at it, held six inches from my nose, marveling, agog that I, Neil Steinberg, a schmendrick with a bowl haircut from Berea, Ohio, was now gorging on caviar on the periphery of a major metropolis with my similarly blessed pals, skyrockets one and all, fuses lit, about to go whizzing toward unimaginable greatness… I feel compelled to remark upon the wonder that Melman’s first restaurant, R. J. Grunts in Lincoln Park, is marking its 50th anniversary Thursday, having survived Vietnam, Nixon, several recessions and wars, Five Guys and, most recently, a plague.” Steinberg sets the scene for Grunts: “The doors swung open June 10, 1971, at 11:31am, a time immortalized on their menus, which are goofy in a Grateful Dead meets Robert Crumb cartoonish fashion. The place is known for its casual vibe and capacious burgers, but the meal-in-itself salad bar there was believed to be the first in the continental United States, [Rich] Melman having read about rudimentary salad bars in Hawaii, of all places…”

“Over the past decade, business boomed,” reports Block Club Chicago in a vest-pocket history of J. P. Graziano’s. “Graziano estimates they often sell fifty sandwiches per hour. The house specialty Mr. G sub has been listed among the best dishes in the city. Graziano credits the businesses’ success to his great-grandfather, his grandfather, father and uncles. ‘Personal relations is what Graziano does. I saw these guys do it for years and years and years in front of me, and I know that worked,’ he said.”

“Niquenya Collins cooks irresistible food — just ask fans of her takeout-only restaurant Cocoa Chili, her family and the guy who once stole some right off her backyard grill,” the Tribune prompts of food critic Louisa Chu’s profile. “Cocoa Chili has appeared on nearly every best and hot restaurant list in the city since opening in February. The beautifully executed dishes have not necessarily developed from family recipes or global travel — but many are born from Collins’ careful study of food that is quintessentially Chicago.”

Dom’s, from the Mariano’s founder, has opened on the edge of Lincoln Park. “The owners of Dom’s combine grocery store experience with venture capital and hope to open 25 locations in the Chicago area and beyond. The first location opened Tuesday morning at the corner of Diversey and Halsted on the border of Lincoln Park and Lakeview,” reports Eater Chicago. “The space is meant to be experiential with Instagram-friendly lighting so shoppers can snap shots of dishes like the Fresh Prince of Chicago, a callout to Will Smith’s TV show that combines Chicago’s Italian beef with a Philly cheesesteak (skirt steak, pickled sweet peppers, fontina, giardiniera aioli),” Eater enthuses. “A room with a skylight feels like a West Loop restaurant and there’s patio seats in front and a pickup window along Diversey marked by a loading zone where customers can hop out of their cars and pick up special party orders like whole porchettas and charcuterie trays. Dom’s co-founder Bob Mariano raves about grilled cheese with tomato sauce: ‘It’s the best grilled cheese I’ve ever had,’ the 71-year-old says with a smile.” Adds the Tribune, “The team is already planning additional locations with a goal of [testing] the model in the Chicago area before expanding elsewhere.”

“The 87-year-old dive bar and indie music venue, The Hideout, is reopening July 6,” reports Block Club Chicago. “The venue is opening for patio-only service in July and August with plans to welcome people back to its indoor bar in September. The Hideout will host the outdoor shows, but skip the indoor show and indoor bar service to protect staff and patrons.” Co-owner Tim Tuten said, “At The Hideout, we love to have reckless fun but we love to do everything as careful as possible. We’re building it as we go along. We’re hoping everyone’s vaccinated.”

With 62 Days Until Trial, R. Kelly’s Lawyers Take Off

R. Kelly’s Chicago attorneys move to withdraw from his racketeering trial two months before it’s set to begin in New York City, reports Jason Meisner at the Trib.“While we realize that this request comes close to trial — and although we are ready to proceed to trial as scheduled in August — our reasons for withdrawal are significant and it is impossible, in our belief, for us to be able to continue to properly represent Mr. Kelly under the current circumstances,” the filing stated. “If the court deems it necessary, we are willing to [serve] as effective stand-by counsel.” The judge “could decide, however, to deny the move given the proximity to the trial, which will attract worldwide attention and is set to begin Aug. 9 after numerous pandemic-related delays. Jury questionnaires had been set to go out to a pool of hundreds of potential jurors next month.”

The brother of Chicago rapper Lil Durk was killed in an early Sunday shooting that also wounded a police officer at a strip club in south suburban Harvey, reports the Sun-Times. “Police were investigating if another fatal shooting hours later was possible retaliation. Dontay Banks, who performed as ‘DThang,’ was killed in a chaotic scene at Club O, where ‘multiple shots’ were fired and ‘lots of weapons recovered.'”

The Joan W. and Irving B. Harris Theater for Music and Dance announced its Harris Theater Presents season for 2021-22. Beginning with a free outdoor event on the Harris Theater Rooftop in August, the Theater will reopen to the public for the first time since March 2020. “The 2021-22 season represents both an extension of the Theater’s global approach to programming under Patricia Barretto, who died of breast cancer last year, and the vision of new leadership for an expanded Harris Theater footprint in Millennium Park and deeper connections across the city,” the theater says in a release. “The theater will resume normal operations this fall, two developments of the last year continue in the 2021-22 season and beyond. In Fall 2020, the Theater established the Creative Future Fund, and opened its doors to independent Chicago artists for free rehearsal usage and providing expanded support to its Resident Companies, the not-for-profit arts and culture organizations who call the venue home. The Theater also launched the HT Virtual Stage, premiering forty-six virtual programs (many created exclusively for the platform) since January 2021 and drawing more than 22,000 unique users to experience free, on-demand content from the Theater’s local and international collaborators. The initiatives were critical to maintaining audience engagement and supporting Chicago artists during the pandemic, and will evolve as live performances return.”

“The Chicago Auto Show, recalibrated this year as a summer event, will include an outdoor street festival that will look like a mini-Taste of Chicago,” reports the Sun-Times. “The show’s producer, the Chicago Automobile Trade Association, said the festival will be on Indiana Avenue, next to McCormick Place’s West Building, the home of the main event. Attendees can head outside to visit food trucks by local operators, check out new vehicles, drink Goose Island beer and hear local musicians.”