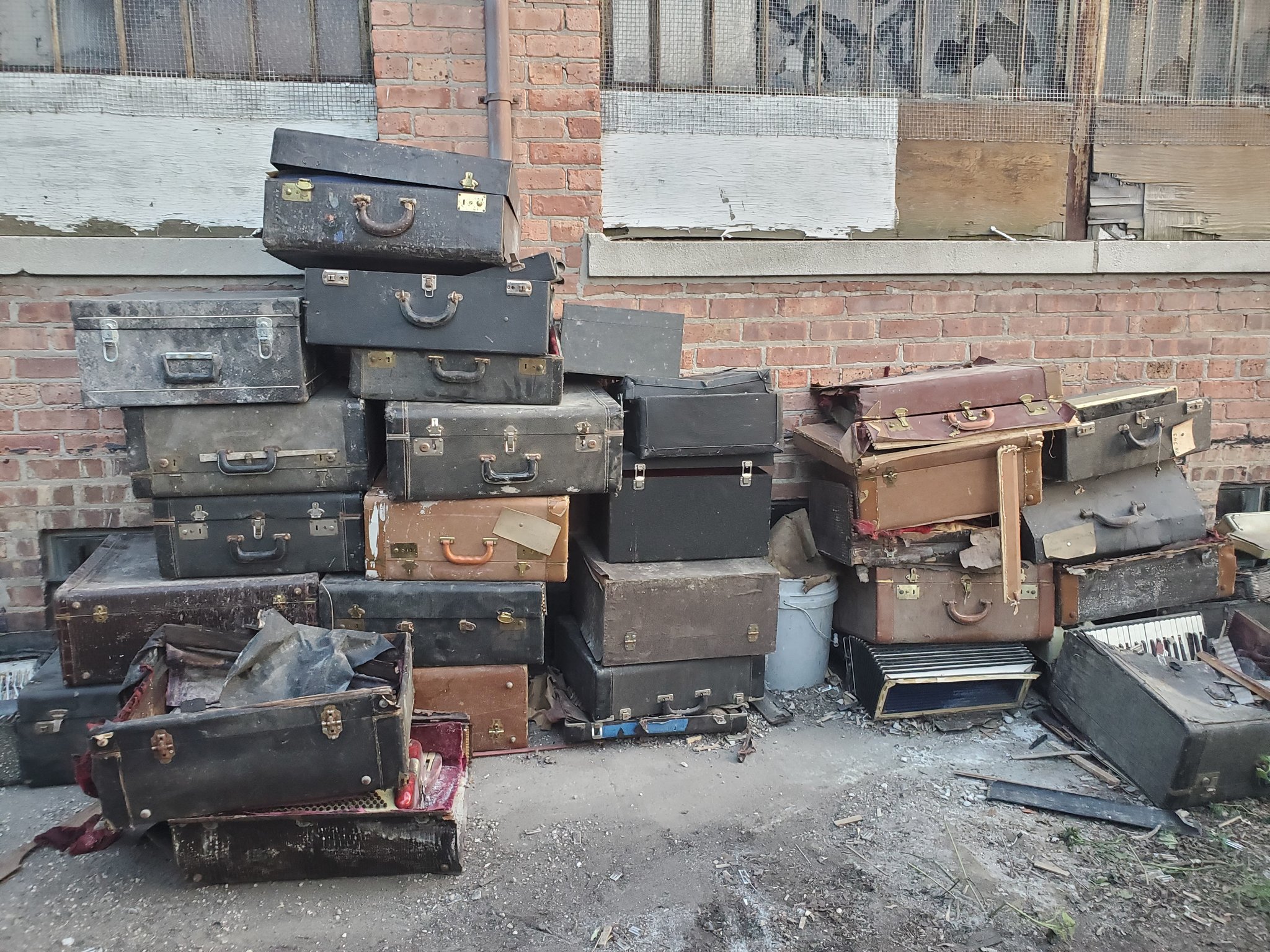 Longtime Chicago bartender Nick Kokonas (not the Alinea Kokonas but of Longman & Eagle, GreenRiver) launches a historical cocktail book with sixty tonic-based cocktail recipes tonight at Avondale Bowl, reports Mike Sula at the Reader. The book “examines the cinchona tree’s role in ‘imperial colonization, religious prejudice, denial of science, corporate greed, and extreme nationalism.’ In other words: ‘the story of the development of modern civilization.'” Monday night’s tonic bar pop-up and release party is $30, with a copy of the book, a tasting, a Kokonas cocktail and a swag bag.

Behind The Scenes In Uptown’s Demera Kitchen

Madeline Kenney savors a visit to Demera and a talk with owner Tigist Reda. “Reda opened Demera in 2007 in hopes of sharing her culture’s hospitality and authentic and colorful Ethiopian dishes with Chicagoans. It hasn’t always been easy — she’s had her fair share of growing pains as a rookie restaurateur — but over the years, Demera has become one of the city’s favorite Ethiopian dining spots.”

Nini’s Deli Reopening In West Town And Will “Double Down”

“We have decided to double down on our Christian worldview and reopen our family business for the glory of God alone!! … We know it is an interesting time to be a vocal Christian business, but we also know all Christians are to be a light in a dark place, and this is the place we are called to.” Juan “Juany” Riesco wrote on Facebook of the apparent reopening of his deli in West Town on Noble Street a year after homophobic and anti-Black Lives Matter outbursts by Riesco, reports Block Club Chicago. (Here’s a forty-nine-second video of Riesco’s performance.) Eater Chicago has a comprehensive compilation of story and video about the aftermath of Riesco’s testifying his beliefs.

A Pulitzer For Mitchell S. Jackson

Mitchell S. Jackson,writing for Runner’s World, took a 2021 Pulitzer for feature writing for an essay on Ahmaud Arbery. (Jackson is also part of Newcity’s 2020 Lit 50.) The freelance article by the University of Chicago associate professor had already won the National Magazine Award for feature writing. From Jackson’s essay in Runner’s World: “Peoples, I invite you to ask yourself, just what is a runner’s world? Ask yourself who deserves to run? Who has the right? Ask who’s a runner? What’s their so-called race? Their gender? Their class? Ask yourself where do they live, where do they run? Where can’t they live and run? Ask what are the sanctions for asserting their right to live and run—shit—to exist in the world. Ask why? Ask why? Ask why? Ahmaud Arbery, by all accounts, loved to run but didn’t call himself a runner. That is a shortcoming of the culture of running. That Maud’s jogging made him the target of hegemonic white forces is a certain failure of America. Check the books—slave passes, vagrancy laws, Harvard’s Skip Gates arrested outside his own crib—Blacks ain’t never owned the same freedom of movement as whites.” Jackson’s response on Twitter: “Oh. My. God!!!!!!!!!!!!”

Save Our Stages Lollygagging On Saving Our Stages

After six months, the $16.1 billion-dollar federal Save Our Stages program remains a lollygagger: “According to a report released this week by the Small Business Administration, which distributes the Small Venue Operators Grant (SVOG) loans, there have been 14,020 applications requesting funding totaling around $11.4 billion,” writes the Gothamist. “Of those, there are 4,661 currently in review, which are considered the most in need—places which suffered 90% or more revenue losses during the pandemic—as part of the first priority period… The SBA was supposed to have reviewed all of those 4,661 priority applications by [last week], but only ninety of those have been awarded the funds, and of those ninety, only forty-eight have been live venues… the government has released $127 million from that $11.4 billion pot of money. The SVOG program provides eligible movie theaters, live venue operators and promoters, talent representatives, and performing arts organizations with grants equal to 45% of their 2019 gross earned revenue, up to a maximum of $10 million.”

James Lott, music minister who recorded famed gospel performers and led “one of Chicago’s finest contemporary gospel choirs” at Sweet Holy Spirit Church of Chicago was 53. The Maureen O’Donnell obit: “James Lott was 16 when his mother Dorothy and 15-year-old sister Tonjia were stabbed to death at their home in Woodlawn. Bishop Larry D. Trotter tried to comfort him, but it was all too much for the young man.” “He took off running, the pain was so heavy,” Trotter, the longtime senior pastor of the church told O’Donnell. “But soon young James did something that had the congregation marveling at his strength, Trotter said: ‘He directed the choir at his mother’s funeral. …  I’m so used to seeing this fella directing a song, and, if the sound wasn’t right, running from the choir to the back of the church, talking to the sound man, and then he’d be back hugging the singers,’ Trotter said… The role of music minister encompassed everything from making sure that choir robes are immaculate to overseeing rehearsals, song selection, the sound system and arrangements.”

Bobby Rush In The NYT

“On the heels of winning his second Grammy in March, and on the verge of publishing a memoir in June, Bobby Rush, now in his 80s, is enjoying a moment of recognition,” writes Brett Anderson. “A lesser-known figure compared to many of the luminaries he has considered friends and mentors, including Elmore James, Muddy Waters and B.B. King, Rush is one of the last remaining Black blues musicians who experienced the horror of Jim Crow-era racism and participated, however tangentially, in the genre’s postwar flowering. ‘I may be the oldest blues singer around, me and Buddy Guy.’ … Rush sat at the edge of a couch at his son’s house in Jackson, slouching to peer into a laptop screen and trotted out a quip he uses onstage: ‘If I’m not the oldest, I’m the ugliest.'”

“If anyone in Chicago is looking for a broken accordion, there are a ton in the alley north of W North Ave between N Newcastle & N New England,” musician Owen Ashworth posted Friday on Twitter. Wistful replies ensued. On Sunday, mystery solved: “there use to be a family-owned music store called Walles Music on that block of North. Walles Music originally opened on S. Cottage Grove & W 76th in 1929, where the Walles Family ran an accordion school. The owners’ son Jay took over the family business as some point & moved the store to the W. North Ave location in 1968. Walles Music closed in 2014 when Jay Walles passed away.” Replied Chicagoan Celia Fern Mooradian: “I am a former accordion repairer: Do not take accordions off the street in this condition. You’re fighting an uphill battle of rusted reeds, rotted wax and wood, not to mention literally pumping mold spores into the air every time you use the bellows.” One forager, however, reported success: “I snagged this one! It’s busted as hell but will look gorgeous on my wall once it’s cleaned up a bit. It’s covered in rhinestones and a quick Google tells me that it was probably made for the 1933 World’s Fair.”

“This is the story of a 53-year-old man who has jumped into Lake Michigan every day for nearly a year,” writes Julie Bosman at the New York Times. Dan “O’Conor’s jumps have followed the complete arc of Chicago’s seasons, from the gloriously warm to the punishingly frigid and back again. And they have nearly traced the pandemic, too, from its early months till its waning days in the Midwest… The daily jump began as a private ritual, a way to escape the demoralizing news of the day, get a little exercise and cheer himself up with a bike ride and the splendor of the lake. One year later, it has become something else entirely. What was once a solitary morning dip in the lake now attracts a regular crew of spectators: family members, friends, casual acquaintances, fishermen and, on some days, a pair of chatty women from Poland who stop by on their daily stroll. The jump is a musical performance, too, ever since Mr. O’Conor began inviting local bands — many of them out of work because of the pandemic — to serenade him as he leaps into Lake Michigan.” Writer Robert Loerzel tweeted video clips at the one-year mark: “A crowd has gathered to see ‘Great Lake Jumper’ jump into Lake Michigan for the 365th day in a row.” Featured: an introduction by Tim Tuten and accompaniment by Jeff Tweedy… Annnnd… Jump number 365.

Is Chicago The “Perfect Place” For Your Thirties?

Edward McClelland in Chicago magazine: “Chicago is just as affordable as the little hometowns they fled, and more affordable than any other big city in this country – at least for renters. For the young and ambitious, no American city offers the same combination of affordability and opportunity as Chicago. The octogenarian essayist Joseph Epstein once wrote, longingly, that “Chicago seems a city for the young, a place where to be in, say, one’s early 30s seems ideal.” Having spent my early thirties in Chicago, after moving here from Decatur, I can attest to the truth of that. Here are a few reasons living in Chicago can actually be a better bargain than in Central Illinois, not to mention New York or San Francisco.”