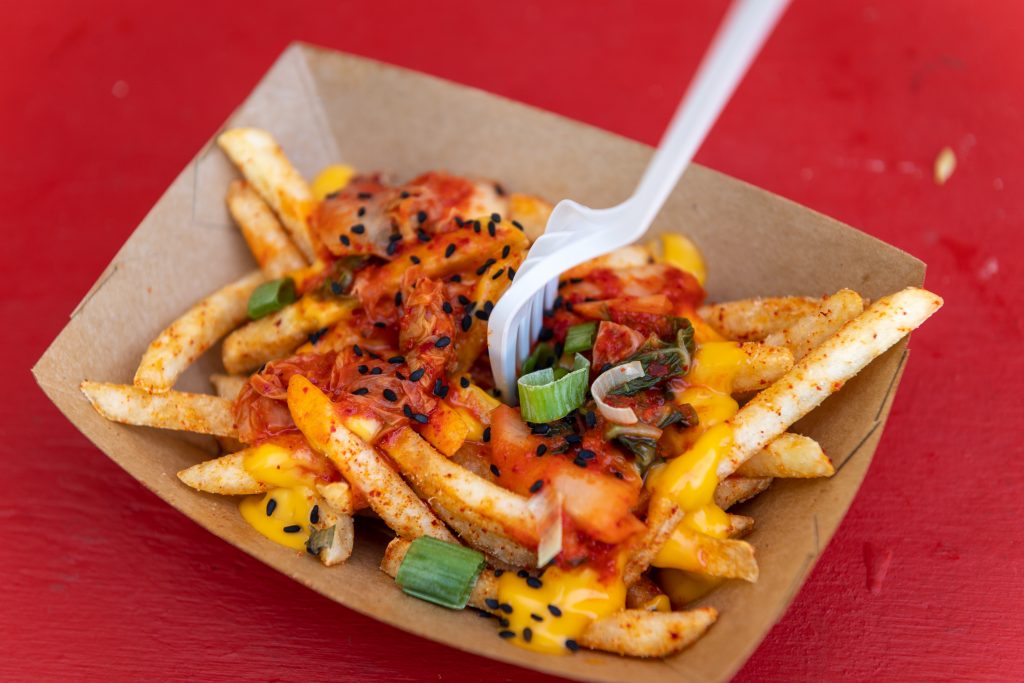 The New York Times style magazine, T, surveys sources around the country for advice on how to spend on art. The Chicago voices: gallerist Monique Meloche and collector and board chair-elect, the Art Institute of Chicago Denise Gardner. Meloche: “There are plenty of lists out there that will tell you: ‘Here are the top five artists this week on Artsy,’ ‘Here are the top five artists at this auction,’ but it’s not like, ‘here’s the best stereo system.’ You have to trust yourself more because you can’t go on Yelp and figure out what artist you’re going to buy… Contemporary art has become so much more accessible in a broader landscape, right? It’s there. It’s on ‘Empire,’ it’s in the movies, it’s a much more important thing just in pop culture. So it’s more at people’s fingertips than people think, and they should have a little more confidence in their opinions. It’s not, ‘What should I buy?’ It’s more like, ‘Can you help guide me?'” Gardner: “I believe in doing a bit of homework. Educating yourself and reading up about the kind of art you’re interested in is really essential. There are a lot of great books about art.”

“Throughout the past year, artist Joel Sheesley painted the Farnsworth House and surrounding landscape en plein air, deftly capturing the dramatic juxtaposition of Modernist architecture with the natural world,” reports the Farnsworth House. The work he created is featured in “Less (and) More: Modernism Greets the River Landscape,” an exhibition of Fox River landscape paintings that give viewers a sense of the land and environment that surround the Farnsworth House. The Conservation Foundation and Farnsworth House will hold a free opening of the exhibition on Sunday, July 11, 2:30-4:30pm, with Sheesley in attendance and signing copies of “A Fox River Testimony,” which features more than seventy of his paintings of the Fox River. After July 11, the exhibition can be seen with the purchase of a guided-tour ticket.

In North Lawndale, a group of street vendors bypass renting to buy their own kitchen. “City rules forbid vendors from preparing food at home or on the street. The kitchen gives them a stable place to prepare tacos, tamales and other goods — and even expand their businesses,” reports Block Club Chicago. “A cooperative of street vendors now owns a shared West Side commercial kitchen they had rented for five years, part of a decades-long journey for the small business owners who long risked being fined or arrested when trying to make a living. Cocina Compartida de Trabajadores Cooperativistas bought the community kitchen at 3654 West 16th this spring… providing a lifeline for people on a small budget selling food to make a living. Buying their own space is a huge victory for the collaborative — and it’s something the thirty-five vendors didn’t anticipate when they started organizing together. ‘We have a place to do our work in peace, with dignity, to achieve prosperity. …This is a treasure,’ said Luis Melendez, a vendor who is president of the co-op.”

For the second year in a row, Black-owned restaurants around Chicago will commemorate Juneteenth by offering food specials for either $6.19 or $16.19. The two-day promotion will run June 18 and 19. The Tribune maps ninety-five eateries.

“Home Depot hot dogs in Chicago are something of a marvel,” prompts the Trib about Nick Kindelsperger’s behind-the-scenes column, “thanks to Makowski’s, a 101-year-old sausage maker in Bridgeport and J. P. Graziano, an 84-year-old local Italian deli.” Writes Kindelsperger, “Because of the lack of atmosphere and the limited menu, including a complete absence of fresh-cut fries, I wouldn’t put Fixin’ Franks up against iconic Chicago hot dog stands like Red Hot Ranch, Superdawg or Jim’s Original. But it’s also not trying to compete in that game. Instead, Fixin’ Franks is just an unreasonably good and convenient spot to grab a Polish sausage, and Chicago is beyond lucky to have it.”

PB&J: Pizza, Beer, & Jukebox is teaming up Friday, June 18 to Sunday, June 20, with Chicago Craft Beer Festival to bring the ninth annual event to Fulton Market. Ticketed guests will receive admission to the tasting area, samples of more than forty beers from all around the Midwest and beyond. Guests will receive a commemorative tasting glass and tasting guide and have access to live music acts. Tickets are $29.99 here.

In an audience survey conducted by the Film Center, over sixty-five percent of patrons responded that they would return to the theater “today,” with eighty-five percent ready to return by August. The Film Center reopens its doors Friday, August 6; opening attractions include pandemic-delayed “Annette,” a Sparks-written musical directed by Leos Carax (“Lovers on the Bridge,” “Holy Motors”) starring Adam Driver and Marion Cotillard, after its July 6 Cannes debut and a year-delayed centenary retrospective of the films of Federico Fellini. The Film Center will offer a free small popcorn August 6-August 20 to audience members who present proof of full vaccination.

“They want it to be an unconventional film treating urban street life, one that isn’t so much about uplift or redemption as about hard realities,” reports the Trib of a fiction feature in the works by Gabe Klinger (Newcity Film 50) and Dreyana Grooms. “Theirs is an unlikely partnership. Klinger, 38, is a white North Sider born in Brazil who has directed two well-regarded films, the romantic drama ‘Porto’ and the documentary ‘Double Play: James Benning and Richard Linklater.’ Grooms is a Black South Sider from the Low End neighborhood around the Dearborn Homes who, while keeping up her grades in school, was also hanging with a neighborhood ‘gang clique’ — as Klinger has put it in trying to sell the movie — and whose life was going sideways at best after the murder charge and then a subsequent gun charge…”  “It kind of feels like I got my family and my friends and my team on my back. And I want this movie to shine for them, for the community,” Grooms tells the paper. “I know it’s violence. I know it’s jail. I know it’s all that that’s involved. Through it all I want them to see like the wildness and how it really is growing up in Chicago. And not just the Low End or the South Side or the West Side. This should shine a whole light on how it is in Chicago.” Says Klinger, “It was very important for Dreyana to, in her words, ‘keep it raw.’ And so it’s not about forcing suspense or plot into this, it’s about showing things as they are. And I think we really believe there’s a power in that.”

Chicago South Side nonprofit journalism production company The Invisible Institute was the only local organization to win this year. Invisible Institute won in the “National Reporting” category, along with staffs at The Marshall Project, Alabama Media Group and The Indianapolis Star, reports Crain’s, for a yearlong investigation of police K-9 units and the damage they inflict called “Police Dog.” “The report beat out finalists at the New York Times and The Wall Street Journal. The organization was also a finalist in the Audio Reporting category for its investigation into the 2016 killing of Courtney Copeland, a 22-year-old Black man, outside of a Chicago Police station. Staffs at The Intercept and Topic Studios helped with that podcast, called ‘Somebody.'”

“How To Stop Hedge Funds From Wrecking Local News”

“Alden now controls the Baltimore Sun, the Chicago Tribune, the New York Daily News, the Allentown Morning Call, the Virginia Pilot, the Orlando Sentinel, the Hartford Courant and the Capital Gazette of Annapolis,” writes Steven Waldman at the Los Angeles Times. “All of these papers are now owned by an economic interest divorced from the communities they serve. Some 1,200 newspapers are now owned partially or entirely by hedge funds, private equity or investment firms, according to Penny Muse Abernathy, an expert on the local news industry. The problem is not that hedge funds or private equity firms are run by evil people. It’s that when it comes to newspapers, their aim has been to maximize cash flow by slashing costs (namely, the reporting ranks), without investing in digital subscription growth that could make the papers sustainable in the long run.” Waldman begins his suggestions: “While these seem like seismic forces, we can counter them if we adopt a strategy to ‘replant’ struggling newspapers back into communities. Hundreds, if not thousands, of the 6,700 local newspapers in the U.S could be strengthened if acquired by local nonprofit institutions.”

“Chicago drill was one of the most thriving rap scenes in the country, until local government and police tried to force it out of the city,” writes Andre Gee at Complex: “Former Chicago mayor Rahm Emanuel resented the Chicago drill scene so much, he didn’t even want a hologram of Chief Keef to perform in the city, arguing that it ‘posed a significant safety risk.’ In 2015, Chief Keef planned to hold a benefit performance for 22-year-old Marvin Carr and thirteen-month-old Dillan Harris, who were killed by stray bullets during the fatal shooting of GBE rapper Capo. Keef, still exiled from Illinois because of child support warrants, devised a plan to beam into the venue from LA via hologram. But first, he had to find a venue. Keef’s co-manager Merk Murphy diligently worked to book the benefit concert, but the Emanuel administration, a local alderman, and even local pastors were on the prowl to deter venues from hosting it. Murphy tells Complex that city officials repeatedly called him about the show, and for weeks, Chicago cops followed a truck containing hologram equipment to such an extent that Murphy had to hide it with large drapes whenever it was parked. ‘There were a bunch of threats,’ he reveals. ‘First they were real subtle, like, “Hey, man, what’s going on? We just want to make sure that everything is OK.”‘ I was like, ‘What do you mean? Everything’s fine.’ Next thing you know, a venue would call and be, like, “Yeah, we can’t do it.”‘” More at the link.

Mercury Theater Chicago will celebrate its reopening at an Open House at the Venus Cabaret, 3745 North Southport on July 10 and 11 in conjunction with the Southport Arts Fest. “The Open House will be a joyful event to welcome audiences for live music and cocktails and the opportunity for guests to meet the new leadership team of artistic director Christopher Chase Carter, managing director Shane Murray-Corcoran and newly announced cabaret director Honey West, along with executive producers Walter Stearns and Eugene Dizon,” the theater says in a release. Mercury Theater Chicago staff and performers will be welcoming patrons, friends and neighbors, with live entertainment by Mercury Theater Chicago alumni. The Open House is free and reservations are not necessary. Cocktails crafted by beverage director Sarah Wurz will be available for purchase. The schedule of performers will be available in advance at the theater’s site.

While there will be no Chicago Blues Festival, Gospel Music Festival or Jazz Festival this year, the City will permit dozens of free and affordable special events throughout the summer, including Taste of Chicago To-Go and Fourth of July fireworks. DCASE will lift the remaining capacity limits for events (aside from normal venue capacity) and will not require advance registration. All summer events will adhere to the latest public health and safety guidelines, with mobile vaccinations at many City-sponsored events. “Chicago’s arts landscape has been devastated by the pandemic, but I’m excited to see our music clubs, theaters, and festivals come back to life and energize Chicago,” said DCASE Commissioner Mark Kelly in a release. “During this 2021 Year of Chicago Music, our ‘Chicago In Tune’ festival will emerge as a joyous month-long celebration of Chicago’s amazing music scene. Our Chicago Presents and other neighborhood programs will animate our entire city with music, theatre, and dance. The arts have suffered greatly, but culture is coming back to Chicago — big time.” Details on the raft of attractions are here.