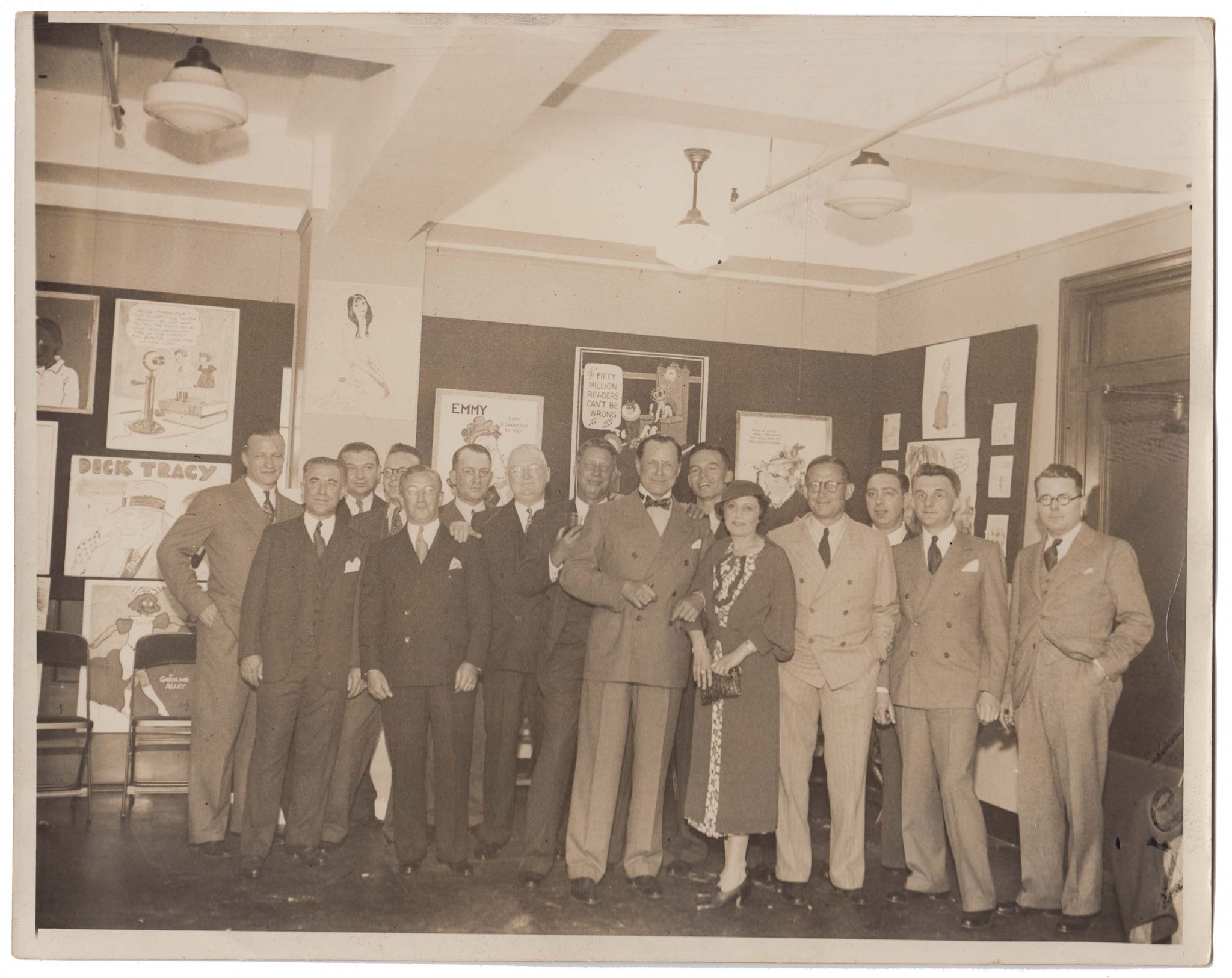 “CHICAGO: Where Comics Came to Life (1880–1960),” curated by Chris Ware and Chicago’s Cultural Historian Emeritus, Tim Samuelson, is open at the Cultural Center. “A significant but often overlooked contribution to American art and culture is Chicago’s role in the development of the early comic strip,” DCASE writes in a release. “Through its countless newspapers and its publishing industry, Chicago led the transformation of comics from daily fantasy and joke features into ongoing stories grounded in the textures and details of real life, its first real step towards legitimacy as an expressive language and semi-literary art form. The exhibition focuses on the origins of the comics in popular publishing, the immeasurable importance of African American cartoonists and publishing, the first woman cartoonists and editors, the first daily comic strip, and finally the art and comics of undeservedly forgotten Frank King, who with ‘Gasoline Alley’ captured not only the rhythms and tone of everyday existence in his characters that aged not only at the same daily rate as its newspaper readers, but were also fictionalized versions of real people.” (The exhibition is designed and planned as an intentional historical companion to the concurrently appearing survey of contemporary Chicago comics at the Museum of Contemporary Art, in which Ware’s work also appears.)

The Museum of Contemporary Photography at Columbia College Chicago (MoCP) held DARKROOM, their annual benefit auction virtually, bringing in over $200,000 to support the museum. Funds raised at DARKROOM will provide critical support for the museum’s exhibitions, collections and community engagement initiatives for the 2021-2022 season. More here.

If approved by the City Council, as expected, construction of the 73-story 1000M residential project, with 738 apartments, Helmut Jahn’s tallest Chicago building, could restart as soon as this fall, writes Ryan Ori at the Trib. “The zoning change requested would allow Time Equities, JK Equities and Oak Capitals to shift the building at 1000 South Michigan to apartments, from condominiums… Changes would include reducing the height of the building to 73 stories and 805 feet tall. That’s a reduction of one floor and 27 feet from the previous plan. The new plan would allow for as many as 738 apartments, an increase of 217 units from the condo design.”

Pressing for a “compromise” with herself after proposing a 10pm cork in the keg, Mayor Lightfoot argued the midnight curfew on liquor sales “strikes the right balance,” reports the Sun-Times on the range of stuff in the omnibus post-pandemic bill at hand. “I’ve always thought that midnight was the place that we should land… Surely, if you need to buy liquor, you can get it by midnight to tide yourself over until the next morning, if that’s what your intent is.”

“We’re so thrilled to announce that our preservation of eight films by amazing cartoonist and filmmaker Heather MacAdams will be funded by the National Film Preservation Foundation,” the Chicago Film Society sneaks on Instagram. “Which means that someday soon there will be NEW PRINTS of these incredible films for us to show you. NFPF can’t reveal the full title in their press release, but one of these photos can confirm the unredacted title of ALL FUCKED UP.” The 2021 list of funded preservation projects for “orphan films” by NPFF can be found here.

About the longevity of Chicago journalism institutions, Roger Ebert wrote in an open letter to the disgraced former sports columnist Jay Mariotti in 2008 in a column, “Jay The Rat,” “I started here when Marshall Field and Jim Hoge were running the paper. I stayed through the Rupert Murdoch regime. I was asked, ‘How can you work for a Murdoch paper?’ My reply was: ‘It’s not his paper. It’s my paper. He only owns it.’ That’s the way I’ve always felt about the Sun-Times, and I still do. On your way out, don’t let the door bang you on the ass.” Now, after thirty-eight years at the paper, the combative, archconservative, George Soros-bashing Kass calls it quits. Kass’ final column includes his memory of how he abruptly became a columnist: editor Howard “Tyner and managing editor Ann Marie Lipinski took me to lunch at Shaw’s. They selected the ‘no smoking’ section and ordered iced tea. I drank the iced tea. Lipinski handed me a rolled-up page from the Tribune, tied with a red ribbon. Inside was a news photo of the pope. ‘That’s Page 3,’ said Ann Marie. ‘That’s your page now.’ They’d just offered me the best job in the world: writing a column four times a week in Chicago, my hometown.” Writes Kass, “What happens next? An adventure happens.” In the meantime, the sixty-four-year-old former Tribune columnist will run a blog, awaiting Substack cash or other substantial offers. Online response was dry: Tweets Tribune City Hall reporter Gregory Pratt: “Good luck John. I honor the journalist you once were, not the out-for-himself pundit you became.” WTMJ talk radio host Jeff Wagner: “A bloodbath of sorts at the Chicago Tribune as many longtime employees take buyouts and head out the door. John Kass, a media rarity as a conservative columnist, will certainly be missed.” Former Tribune editor Mark Jacob on unfinished Kass business: Kass “declared on May 11 that the 2020 election may have been ‘rigged.’ When people challenged him, he said Twitter was a poor place to talk about it so he’d write a column. 38 days later, we’re still waiting for that column.” And Reader writer Leor Galil: “I have so many thoughts, but my heart goes out to every single person who has had to put up with this guy’s shit.”

On The Tribune’s Rapid Writer Exodus

Old saying: beware of a business where the talent walks out the door each day. Or, beware of a business plan where the talent takes the cash and walks out the door one week in June 2021. “Sunday’s edition of the Chicago Tribune includes the farewell columns of John Kass, Mary Schmich and Heidi Stevens. With still more to come. Surreal,” observes Robert Feder. “It is astonishing to watch so many talented writers leave the Tribune. Not all hedge funds destroy brands to generate quick cash, but that seems to be the story at the Tribune,” tweets Tim Calkins, marketing professor at Northwestern University’s Kellogg School of Management.

Chicago Tribune Guild president Gregory Pratt reminds us of a key villain behind the entire Alden Global Capital mishegoss: “I wish the best for L.A. Times journalists. But our newsroom is losing about a quarter of its staff (roughly 40 people) because Dr. Pat Soon-Shiong sold us out to Alden Global Capital with a gutless non-abstention ‘abstention.’ Let the record reflect he’s no journalism hero.” (The occasion is an interview with CNN’s glib media interlocutor Brian Stelter, where he pats the former largest Tribune Publishing shareholder on the head for his vague East Coast-versus-West Coast ambitions.)

“Happy to share some exciting news,” journalist Tina Sfondeles announced via Twitter. “I’m joining the Politico team as a White House reporter and will be penning the West Wing Playbook with Alex Thompson,” she writes. “I’m extremely grateful to the Politics Insider team for welcoming me to Washington. And I’m excited to work alongside my former Sun-Times colleague Natasha Korecki!”

Mary Schmich: Out After Twenty-Nine Years

Institutional memory, schminstitutional memory: “A little voice has long told me, ‘When it’s time to go, you’ll know.’ It’s time. I leave the Chicago Tribune with deep gratitude for my colleagues, the Tribune readers and the people whose stories have helped me understand the world,” tweets Pulitzer Prize-winner Mary Schmich on her final column for Alden Global Capital. “This vast, Northern metropolis mystified me,” she writes of her arrival in Chicago nearly thirty years ago; and of her departure, “I’ve never written a column that I didn’t wish was better, including this one. But I’ve done it as well as I knew how, never forgetting, even when I cursed the constant deadlines or felt bad that I couldn’t answer all the email, that there was nothing better than being granted this education and this connection with the world, with all of you.” And, one final paragraph: “-30-“

“We had twenty-six Chicago Tribune Guild journalists apply for the buyout,” Gregory Pratt writes on Twitter. “It’s up to our colleagues to break their own news. It’s sad to lose so many colleagues but we are resilient. We honor everyone who’s leaving and also those who stay. We will continue our fight… It’s roughly a quarter. Painful.” NPR media correspondent David Folkenflik: “Assuming all or most of these applications are accepted, about a quarter of Chicago Trib newsroom guild would be taking the buyout. Another fourteen non-Guild said to be seeking it as well. Loss of forty journos – rough toll on already shredded Trib ranks.” Trib City Hall reporter John Byrne: “Having a morning when doing the minute-by-minute journalism work is helping me disassociate myself from the larger rottenness unfolding in the Tribune newsroom as dozens of talented reporters take Alden buyouts. Easier to worry about the immediate fate of police oversight.” Tribune columnist and editorial writer Steve Chapman: “Over my career, I’ve written close to 4,000 editorials for the Chicago Tribune. Today I wrote my last one… I’m leaving the Chicago Tribune after 40 years as a staff columnist & editorialist. My twice-weekly column, syndicated by Creators, will continue to run in the Tribune and other papers. I’ll also be writing for other outlets. Thanks to my editors & readers.” (Rick Telander replies: “What a Trib loss! But life goes on. Keep writing, Steve–your knowledge and reasonableness are rare these days.”)

Eric Krol, a now-former editor: “It’s my last day at the Chicago Tribune. Loved the work, and worked with so many talented people. Don’t know what’s next.” Shannon Ryan, former college football and basketball reporter: “A tough decision, but I will be among those leaving the Tribune… Beyond thankful to have worked with such gifted, driven and passionate reporters during my time… I’ve loved all the friends I’ve made along the way – from Chicago to Champaign and beyond. It’s been an absolute blast. Please continue to support Chicago Tribune journalists – your watchdogs who keep the powerful accountable, who tell the story of Chicago and who bring you the heartbreaks and joys of our city teams – by subscribing.”

“Fritzie devoted her life to combating hatred and prejudice,” the Skokie-based Illinois Holocaust Museum and Education Center said, in a statement, of their president since 2010, Auschwitz survivor Fritzie Fritzshall. “She tirelessly fought hatred, telling her harrowing story of survival and articulating her insights on current issues, including the rise of anti-Semitism and the refugee crisis.” The Tribune’s obituary recounts the details of her experience. “Fritzshall remained an active member of the community up until her death [and] spoke extensively about her experiences in the Holocaust and advocated for social justice issues, including immigration and the refugee crisis… ‘Fritzie was the heart and soul of our museum,’ said Susan Abrams, the museum’s CEO. ‘All who were touched by her will never forget. She was an inspiration to me and to so many others.'”

No Air & Water Show This Year, But Blue Angels Will Still Fly

“There won’t be an Air and Water Show this summer — but the city will have air show events,” reports Block Club Chicago. “The U.S. Navy Blue Angels will do a solo demonstration noon-1pm on August 21-22 along the lakefront, with practice 10am-2pm on August 20.”

Figure Out The Loop Yourself With Self-Guided Tours

The Loop has been divided into three walking tours of its myriad murals, writes the Sun-Times.“Our goal is to get Chicagoans back into the Loop,” Jessica Cabe, the public relations and communications manager for the Chicago Loop Alliance tells the paper. “‘These murals became fixtures in the city after our Activate [pop-up festival] events, and the routes to see them range from casual to more suited for the urban explorer.’ Most of the murals are surprisingly well-preserved; the Chicago Loop Alliance allocates part of its budget to ensure the murals are free of graffiti and extreme weather damage.” Info here.