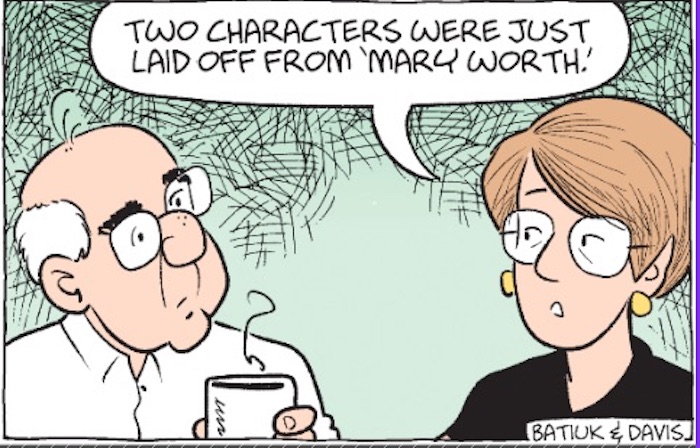 The Times Gets Around To Remembering Karl Wirsum

Roberta Smith writes the obituary for Karl Wirsum’s May 6 passing: “With titles like ‘Lana Turner With Her Own Eyebrows Before Schrafft’s’ and ‘Some Underwear Over the Rainbow,’ Mr. Wirsum’s art was suffused with a great deal of humor. But the man himself was quiet and reserved, with tastes on the spartan side. Very health conscious, he had followed a macrobiotic diet since the 1970s and went running nearly every day until he was 75… Mr. Wirsum’s achievement rested on his highly original synthesis of multiple sources — high and low, ancient and modern, East and West — and his fusion of organic and geometric forms. His figures almost inevitably combine a kinetic exuberance with something more sinister. Their masklike faces grin and grimace.”

Chicago-based Icelandic artist Baldur Helgason perks up Artsy: he “has built up a passionate collector base with his playful approach to portraiture, which blends elements of caricature with art historical allusions,” writes Benjamin Sutton for Artsy. “In the past week, his works have elicited the most dramatic week-over-week increase in inquiries of any artist on Artsy, fueled in large part by his recent solo exhibition on the platform, ‘Bad Timing,’ with London’s Ramp Gallery. Already, the number of collectors who’ve inquired about his work on Artsy this year has nearly doubled the total number for 2020. This surge in demand on the platform comes amid rising overall art market interest in his work in the U.S., his native Iceland and beyond.”

The Chicago Botanic Garden will begin to charge for admission in 2022 for the first time since its 1972 founding, reports Patch Winnetka-Glencoe. The new fee for non-members, ranging from $10-$26 will be accompanied by a drop in parking fees. “Built on mostly unincorporated portions of land owned by the Cook County Forest Preserve district, the garden is owned by the county and operated by the Chicago Horticultural Society,” Patch describes. The 385-acre attraction has seen a forty-three percent increase in attendance over the past ten years, according to a release. “Jean Franczyk, the garden’s president and CEO, said in a statement that the new admission fee and reduced parking fees will help cover the cost of maintaining the garden to meet the increase in demand while still providing accessibility.”

“The thirty-three Northern catalpa tree saplings arranged in a council ring along a Wing Park trail in Elgin aren’t much to look at now, but Rob Vandermolen promises that in twenty years, they will become a living, breathing work of art,” reports Gloria Casas for the Trib. “The idea is to create a canopy. The trees are happy growing together and supporting each other,” Vandermolen tells Casas. “In ten years, it will be nice. In twenty years, this will be a destination. It’s going to be a place for people to come and just dream, meditate or read a book. It’ll be a place of calm and quiet.” His inspiration came from “The Overstory” by Richard Powers. “An overstory is the top foliage from multiple trees that combine to create an overhang or canopy under which people can walk or sit. In this case, the trees will form a circle known as a council ring, which provides an access to its interior.”

“The world looks to Chicago for innovative approaches to architecture, urban planning and the arts, and the contributors and partners assembled for ‘The Available City’ carry that legacy forward,” says Chicago Architecture Biennial founding board member Michelle T. Boone. “Chicago’s neighborhood and cultural leaders are eager to welcome the world back to Chicago in September 2021.” CAB has announced neighborhood and community partner sites and organizations to collaborate with contributing global design leaders and present installations and programs when the Biennial opens on September 17. “These partnerships are part of artistic director David Brown’s vision for ‘The Available City,’ asking how design can foster collective engagement and agency to identify new forms of shared space in urban areas. Brown selected community-focused partner organizations to highlight a range of innovative approaches and ideas that can transform a vacant space into a community resource. A continuously updated list of Chicago Architecture Biennial 2021 Partner Sites with extensive descriptions of the collaborations is here.

Fooditor writes about the end of Chicago Style. “It is a lesson as old as history—whip up the mob for your own purposes one day and you may find it coming for you the next. It happens frequently in the hothouse culture of social media, and an example of it may be happening this week to Shelby Allison, owner of Lost Lake and co-founder of Chicago Style, a woman-focused cocktail conference held in 2018 and 2019… The New York Times described it in 2018 as ‘a new cocktail conference with a political twist,’ and it seemed a self-declared exemplar of a new, more inclusive and frankly, woke approach to bartending culture, in a field that has often been male and was often sexist… And now it’s announcing its ‘sunset’… ‘Ahead of our April 2021 virtual training series, a member of our community reached out to us with concerns about the ways in which we — as individuals and as an organization — have faced conflict and caused harm in the past. We are so grateful to this person for their call-in, and we’re very sorry to those we have let down. We recognize that we each have work to do, and have engaged the guidance of professionals to advise us as we hold ourselves accountable for doing that work.'” Much more at the link.

“As Chicagoans dined at Black-owned restaurants to celebrate Juneteenth, one of its most iconic vegan restaurants celebrated a renaissance,” reports Eater Chicago. “Since 1981, Soul Vegetarian, the 75th Street restaurant that has been ahead of the curve, offering meat- and dairy-free items like protein tidbits, the barbecue twist and veggie gyros, reopened on Saturday, June 19 with Mayor Lori Lightfoot presiding over a ribbon-cutting ceremony in Chatham… Co-owners and siblings Arel Brown and Lori Seay, the children of founder Prince Asiel Ben Israel, in 2017 purchased the 112-year-old building at 205 East 75th with the goal of completely remodeling the building.”

Design professional association AIGA features Obiora Nwazota’s “Nkemdiche” in its “50 Books 50 Covers” winners. Michael Workman wrote about the book in Newcity last month: “This sumptuously designed and illustrated volume by Obiora Nwazota and his team is bound like a children’s book, but is also a designed art object in its own right. Presented as a social ‘hairstory’ folktale, it telescopes and uses the value and sacredness of hair in traditional as well as contemporary Black and brown cultures to thread a well-imagined conceit of the bearded women of Igboland. It’s a place also known as modern-day Nigeria where, in this alternative timeline looking back onto a practice that never existed, the women would languish beneath the Udala trees, ‘grooming their beards’ while they ‘swapped stories and exchanged juicy gossip.'”

“Talk about sweet sorrow,” tweeted Chicago Tribune editor-in-chef Colin McMahon. “Once again, Mary Schmich takes on a difficult and nuanced assignment—the farewell column (most drip with sap and suck)—and she nails it.” Pioneer Press columnist Georgia Garvey files the buyout column: “I don’t know what exactly to say, that’s true, but more importantly, I don’t want it to be over. I don’t want to stop writing this column. I don’t want to no longer be a newspaper person. I don’t want to take that final step, walk out the door and leave the Tribune, even though I know that it’s time.” Director of content and business editor Mary Ellen Podmolik: “After almost 13 years on the Chicago Tribune’s business team, I am taking a buyout and off to search for the next challenge. I leave with a wealth of friendships formed with colleagues and people I’ve met along the way. I’m thankful for the trust Chicagoans placed in me to tell their stories, for the opportunity Mike Kellams gave me to become an editor and for the faith Peter Kendall placed in me to lead the department and build a truly kick-ass team of business reporters and editors… The Tribune has been informing and entertaining readers, and holding the powerful accountable, since 1847. News isn’t free. Please subscribe.” Columnist Dahleen Glanton: “My dad… told me in 1989 that it was time for me to ‘get a job and keep it.’ So, I did for 32 years. Now, I’ve decided to take the buyout and will be leaving the Chicago Tribune this week along with many of my colleagues. It’s been a wonderful ride!” And from “Crankshaft”: breaking news.

The Lyric Opera of Chicago shares news of the death of American soprano Gianna Rolandi. Following a highly successful international performing career of two decades, Rolandi retired from the stage in 1994 and was appointed the first director of vocal studies for Lyric’s Ryan Opera Center in 2001, later becoming the program’s director from 2006-2013. Rolandi continued to teach individual singers privately. Beyond her artistic career and immense accomplishments in performing, coaching and teaching, Rolandi was the wife of Lyric music director Sir Andrew Davis. “All of us at Lyric Opera of Chicago join Sir Andrew, Ed, and the entire classical music world in mourning Gianna’s passing. Gianna was an inspiration and shining light for so many of us: how we will miss her wisdom, humanity, artistry and overflowing heart. We have been incredibly fortunate that Gianna was such an important part of our Lyric Opera family for more than twenty-five years,” says Anthony Freud, general director, president and CEO of the Lyric.