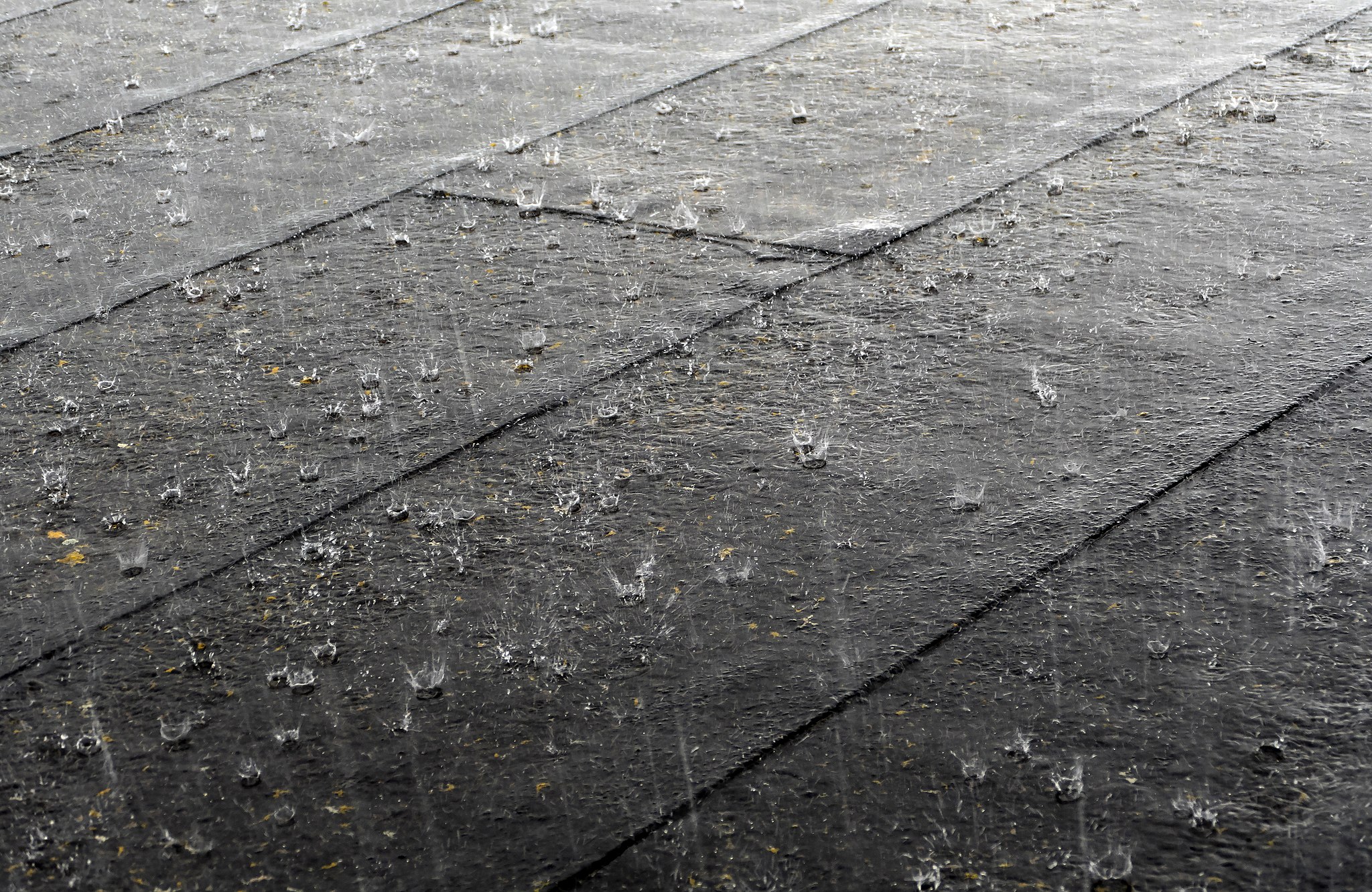 Hard rain on a roof in Sweden/Photo: W. Carter

ARIES (March 21-April 19): In his poem “Litany,” Aries poet Billy Collins testifies that he is “the sound of rain on the roof.” He also claims to be “the moon in the trees, the paper blowing down an alley, the basket of chestnuts on the kitchen table, and the shooting star.” He does make it clear, however, that he is not “the bread and the knife” on the table, nor the “crystal goblet and the wine.” What about you, Aries? What are all the earthy and fiery phenomena that you are? Are you, as Billy Collins suggests, “the dew on the morning grass and the burning wheel of the sun and the marsh birds suddenly in flight”? Now would be an excellent time to dream up your own version of such colorful biographical details.

TAURUS (April 20-May 20): “Why else keep a journal, if not to examine your own filth?” wrote poet Anne Sexton. And yes, Sexton did have a lot of filth to explore, including the physical abuse of her daughters. But most of us don’t need to focus so obsessively on our unlovely aspects. Keeping a journal can also be about identifying our ripening potentials and unused riches. This approach would be especially fun and wise for you Tauruses right now. The coming weeks will be an auspicious time for deep introspection that frees capacities and powers you have only partially activated up until now.

GEMINI (May 21-June 20): Journalist Sam Anderson marvels at his young daughter’s project: a small plastic dome-like structure that houses a community of ladybugs. All they need to consume, for weeks at a time, are “two water-soaked raisins.” I don’t think you’ll need to be forever as efficient and hardy as those ladybugs, Gemini, but you may have to be like that temporarily. My advice? Don’t regard it as a hardship. Instead, see it as an opportunity to find out how exquisitely resourceful and resilient you can be. The skills you learn and refine now will be priceless in the long run.

CANCER (June 21-July 22): Cancerian poet Linda Hogan says she doesn’t like to be parched. She wants to be like “a tree drinking the rain.” I think every Cancerian has similar dreams: to be steadily immersed in engrossing feelings, awash with intimate longings, flowing along in rhythm with the soul’s songs. The coming weeks will be prime time for you to relish these primal pleasures. It’s probably best to avoid an outright flood, but I think it’s wise to invite a cascade.

LEO (July 23-Aug. 22): Actor Lupita Nyong’o had a starring role in Steve McQueen’s film “12 Years a Slave.” She praised his directorial skills. She loved the fact that he told her, “Fail, and then fail better.” Why? “That kind of environment, where failure is an option, is magical,” she said. It allowed her to experiment freely, push herself beyond her previous limits, and focus on being true to the character she was playing rather than trying to be a “good actor.” I think these are excellent principles for you to keep in mind during the coming weeks.

VIRGO (Aug. 23-Sept. 22): Virgo-born Wayne Shorter is a legendary jazz composer and saxophonist. He has been making music for over sixty years, often with other legendary creators like Miles Davis and Herbie Hancock. The New York Times described Shorter as “jazz’s greatest living small-group composer and a contender for greatest living improviser.” Bass prodigy Tal Wilkenfeld, who isfifty-three years younger than Shorter, tells the story of a show she performed with him. Just before going on stage, Shorter came up to her, sensing she was nervous, and whispered some advice: “Play eternity.” Now I’m offering that same counsel to you as you carry out your tasks in the coming days. Be as timeless as you dare to be. Immerse yourself in the most expansive feelings you can imagine. Authorize your immortal soul to be in charge of everything you do.

LIBRA (Sept. 23-Oct. 22): Libran author Paula McLain says the word “paradise” is derived from the ancient Persian word pairidaeza, meaning “walled garden.” For her, this association suggests that making promises and being faithful to our intentions are keys to creating happiness with those we care for. Paradise requires walls! To scrupulously cultivate freedom, we need discipline. If we hope to thrive in joyous self-expression, we must focus on specific goals. I bring these thoughts to your attention because now is a pivotal time to work on building, refining and bolstering your own personal version of paradise.

SCORPIO (Oct. 23-Nov. 21): Thousands of twenty-eight-pound bars of twenty-four-carat gold are stored in the Bank of England’s underground vault. To gain entry to the treasure trove, bankers use metal keys that are three feet long. They must also utter a secret password into a microphone. According to my reading of the astrological omens, you Scorpios can now gain access to a more metaphorical but nevertheless substantial source of riches. How? The key is a particular scene in your imagination that has recently begun to coalesce. It is an emblem of a future triumph or breakthrough that you will accomplish. As for the password, which you will also need, it’s vigorous rigor.

SAGITTARIUS (Nov. 22-Dec. 21): Somehow, I have lived all these years without ever coming across the rare English word “selcouth.” Today, as I meditated on the exotic astrological portents coming up for you, that word appeared—arriving on my phone via text message from my Sagittarius friend Lila. She told me, “I have a feeling that life is about to get intensely SELCOUTH for us Sagittarians.” I looked up the unfamiliar word and found these synonyms: unusual, marvelous, strange, magnificent, scarce, wondrous, weird, rare and exotic. Those terms do indeed coincide with my interpretation of your immediate future. So Happy Selcouth to you, dear Centaur! Celebrate with awed appreciation!

CAPRICORN (Dec. 22-Jan. 19): Lexicographer Jonathon Green provides us with the following nineteenth-century slang words for the sex act: horizontal refreshment, strumming, playing at romps, cully-shangie, taking a turn at Mount Pleasant, dancing the blanket hornpipe, honeyfugle, giving a hot poultice for the Irish toothache, and—my favorite—fandango de pokum. In accordance with astrological potentials, I recommend that you consider trying them all out in the next four weeks. In other words, experiment with shifting your approach to belly-bumping and libido-gratifying. If you don’t have a human partner, do it alone or with an angel or in your fantasy life.

AQUARIUS (Jan. 20-Feb. 18): If a lover or spouse is perpetually churning out fantasies of you in their imagination, they may be less than totally tuned in to the real you. Instead, they may be focused on the images they have of you—maybe so much so that they lose sight of who you genuinely are and what you are actually doing. The same possibility exists for other allies, not only lovers and spouses. They may be so entranced by their stories about you that they are out of touch with the ever-changing marvel that you are always evolving. That’s the bad news, Aquarius. Here’s the good news: The coming weeks will be a decisive time to correct such distortions—and revel in the raw truth about you.

PISCES (Feb. 19-March 20): Here’s how art critic Walter Pater characterized the work of Piscean artist Michelangelo: “sweetness and strength, pleasure with surprise, an energy of conception which seems to break through all the conditions of comely form, recovering, touch by touch, a loveliness found usually only in the simplest natural things.” I’ve been waiting for the arrival of astrological aspects that would mean you’d be an embodiment of that description. And now they are here. Congrats! For the next thirteen days, I will visualize you as a fount of ever-refreshing grace—as a fluid treasure that emanates refined beauty and wild innocence.

Homework: Tell me how you like it the best. Write to [email protected]