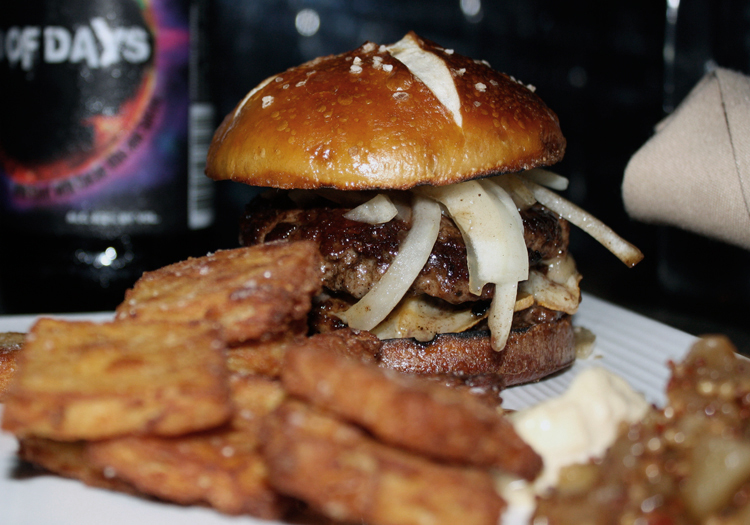 A Table, Donkey And Stick burger; part of Trib burger 25

“A Chicago developer hopes to nail down city approval for a Near North Side apartment tower, after taking the unusual step of increasing the height from its previous proposal despite vocal opposition from neighboring condominium owners,” reports Ryan Ori at the Tribune. “Fifield Cos. will present plans for a thirty-nine-story tower at 125 West Maple, in a virtual meeting hosted by the Gold Coast Neighbors Association and 2nd Ward Ald. Brian Hopkins. The 303-unit proposal also is on Thursday’s Chicago Plan Commission agenda. Fifield’s revised proposal is a reduction from the forty-three-story, 406-unit plan that was unveiled last July. But it’s taller than a twenty-nine-story proposal Fifield showed to residents of a neighboring condo building, the Gold Coast Galleria, last fall.”

“The defining feature of the Arlington Heights property is its size,” reports the Trib of the potential site for a new Bears stadium. “At 326 acres, the site is far too big for any single use, developers say. While an industrial park could fill the space, village officials don’t want that. Housing in the suburbs is always in great demand, but school districts can’t handle too many homes without building expensive new schools. Offices and retail buildings already have rampant vacancies. A balanced mix of uses could work, developers say, if there was a large, marquee, anchor tenant to increase the value of the surrounding land. Arlington International Racecourse was just such a use on the site but now is past its prime, built for a sport that has had generally dwindling attendance and revenue in Illinois for decades.”

The hardest-hit segment of the Chicago restaurant business during the pandemic was the hundred or so food trucks on the streets, reports Crain’s. “Food trucks, so dependent on downtown office denizens for survival, may be out of luck if the… work-from-home revolution permanently upends 9-to-5 office life.” Events help some companies, but “They must be choosy about where they go, to ensure an event or location is financially viable. Evanston catering company Soul & Smoke won’t dispatch its food truck to an event unless it can make $3,500 on the weekends [or] about 250 barbecue brisket sandwiches.”

While dissing Kuma’s and Fatso’s and Epicurious discarding beef recipes, the Trib’s Nick Kindelsperger goes for twenty-five Chicago beeferies: “An explosion of new burger joints has shaken up the scene. I can’t remember a time when there were so many outrageously great burgers around… I know many honorable human beings who swear they love grain-based veggie burgers, and I’ve found a couple I don’t mind. But the few weeks in 2018 I spent eating veggie burgers was one of the most excruciatingly boring experiences of my eating career… I can’t get past the fact that beef simply tastes better. It’s more complex, juicier and has a more pleasing texture. For now, beef is king. I’d rather have the occasional astonishing burger than numerous mediocre ones.” Among the selections: Good Measure; The Stop Along; Charly’s Burgers; Donkey, Table and Stick; Ludlow Liquors and The Loyalist.

After thirty years in the Loop, family-owned Luke’s Italian Beef enters into the Hall of Fame, reports WGN TV. As the 135th honoree, “Vienna Beef planned to present their hall of fame award on April 1, 2020 but delayed due to the pandemic… The Vienna Beef Hot Dog Hall of Fame was created to honor hot dog operations that have achieved longevity and developed into neighborhood landmarks.”

Reservations for the restaurant from Next Restaurant alum Jenner Tomaska are live for the August opening, reports Eater Chicago. “Tomaska and wife Katrina Bravo want to give Lincoln Park a different type of fine dining restaurant, allying with local artists — including notable photographer Paul Octavious — in creating special collaborative meals.”

“Rebecca and Kimberly George closed their Milwaukee Avenue storefront last year,” reports Block Club Chicago. “Now, they’ve found another building in the neighborhood and have launched a GoFundMe to buy what could be the new home for the bookstore. ‘We just decided, instead of hinting at what we were doing, we were like, “Let’s just lay it out there and see what people think,”‘ Rebecca George said. ‘Because everyone wants us back. Right? It’s just, we need to be honest that we’re so close. But we need some help getting over that last hump to make it happen.’ … George said they have several investors funding a permanent location, but any money collected through GoFundMe would give them a much-needed boost.”

“The family of detained journalist Danny Fenster and their congressman are raising concerns about the health of the [journalist] being held in a prison in Myanmar that is experiencing an outbreak of COVID-19,” reports the Detroit News. “U.S. Rep. Andy Levin, who represents the Fenster family in Congress, said during a recent call U.S. officials learned that Danny began experiencing chest congestion and a fever earlier this week but has not been tested for the virus.  The U.S. Embassy has also been denied in its requests to vaccinate Fenster for weeks as the virus situation in the country has worsened, Levin said.”

Editor Liam T. A. Ford exits the Trib after twenty-three years with these words: “I hope after these initial buyouts, Tribune Publishing’s new owners take the long view, and realize they can grow their business by investing in their product. I’m not one of those to say that the old guard of newspaper leadership did nothing to try to respond to the web. But today, if you’re not covering at least the most important events in your community, you’re not serving your readers, whether you’re a small weekly, a startup nonprofit news site, an NPR station or a big newspaper. If people realize they can get their news elsewhere, they’ll go elsewhere. And if you don’t have the staff getting to know people in your community, then you might make a few years of profits, but you won’t be around in the long term. If a news organization doesn’t reinvest in the newsroom and the product it’s selling—and the reporters who find the news—it won’t continue to have readers or viewers. In the end, even the marketplace of ideas is a marketplace—and if you’re a company trying to make money, your product—in this case, information—had better be the best it can be.” More here.

Marti Lyons is the new artistic director of Remy Bumppo Theatre Company. She was selected after a national search led by ALJP Consulting, with a search committee composed of select staff, core ensemble members, board members and members of the local community. Board of directors president Joan Callahan: “Her nationally respected artistry combined with her warmth and passion for collaboration and commitment to multitudes of perspectives will be key for our continued growth. She has a deep respect for our history of ideas, language and ensemble process and will use that to deepen our connections to our present audience and engage with new.” Lyons: “I am thrilled to join Remy Bumppo as artistic director. Remy Bumppo and I share a passion for language-based work. We also share a love for both ensemble-based work as well as new collaborations. I join Remy Bumppo in a transformative moment in the company, in the country and in the world. As we transform, we honor the work that has come before while striving to ever better ourselves. We are committed to anti-racist and anti-exploitative practices and to operating with transparency, accountability and integrity. I am excited to embark on this journey.” Lyons most recently directed “I, Banquo” by Tim Crouch at Chicago Shakespeare Theatre and the audio production of “Kings” by Sarah Burgess for Studio Theatre in Washington, D.C. Next, Lyons will direct “Cymbeline” at American Players Theatre. More here.

Art on theMART is looking for Chicago-based dance artists and companies with a strong visual practice to create an original moving-image artwork and accompanying audio to be projected as part of Art on theMART, a public new media art platform. The projection will be a part of Art on theMART’s 2022 season, in partnership with the Chicago Department of Cultural Affairs and Special Events. Finalists will receive $1,000 to submit a full proposal that includes a video sample; the commissioned artist or artist collaboration will receive an award of up to $25,000. Deadline is August 9; apply here.