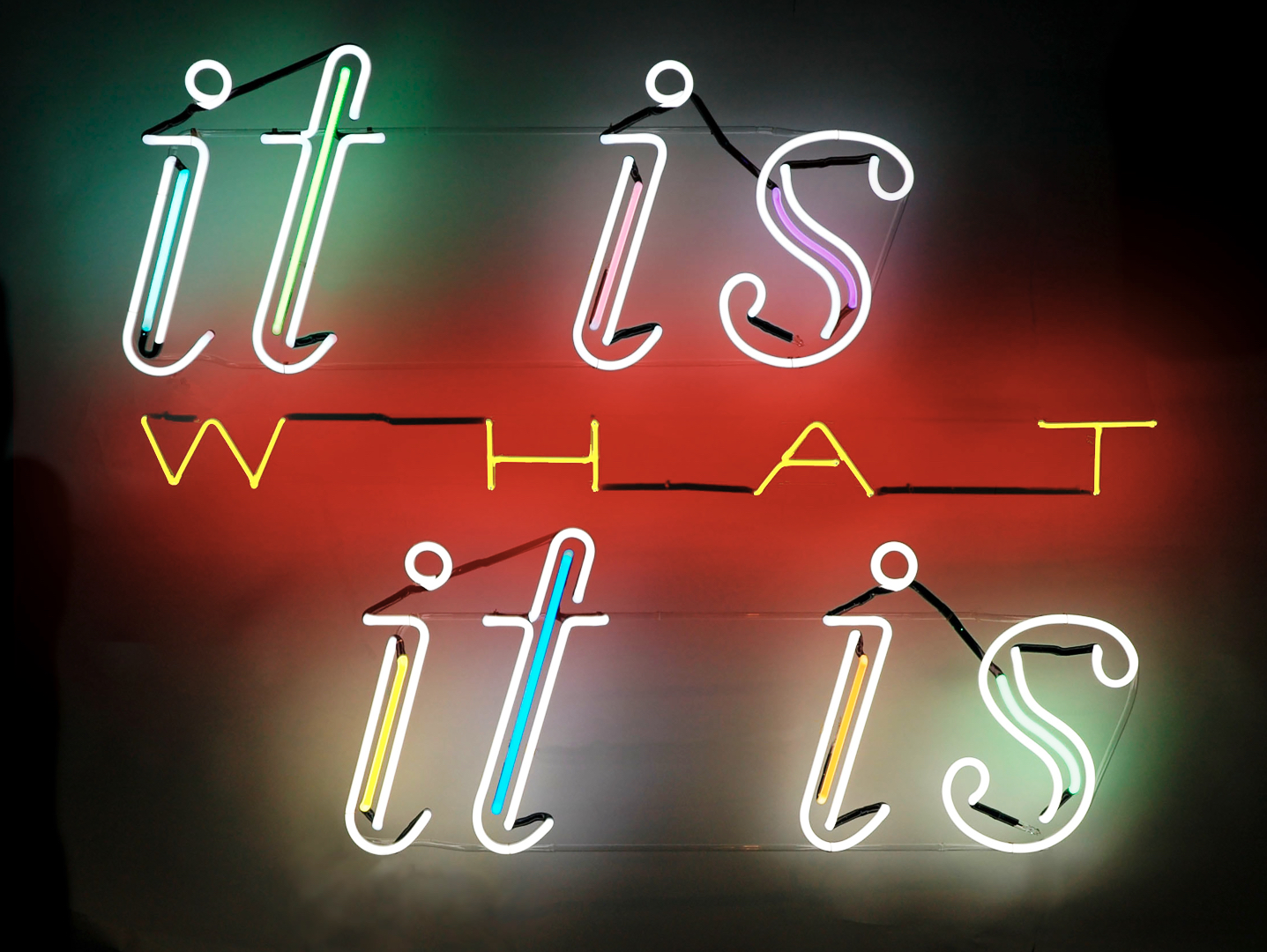 “It Is” by Jacob Fishman

The Neon and Light Museum has set a pop-up for eight weeks starting in September in River North’s former Nacional 27 space, with seventy or so professional neon and light-based sculptures in an immersive exhibition. Among the pieces highlighted by the museum: John Bannon’s “Breathe,” a fourteen-foot-tall perspective-based neon sculpture that when seen from the west, an image of a mature woman smelling a rose appears, while the view from the north reveals an image of a young girl blowing the seeds of a dandelion; “Circle’s Edge,” Monika Wulfer’s installation inviting participation with activated gas trapped in glass tubes; and an iconic neon self-portrait by John Lennon. Other artists include British artist Sarah Blood, feminist neon artist Zoelle Nagib, pop sign artist Jason Pickleman, neon master bender Jacob Fishman, the digital imagery of Detroit’s Annica Cuppetelli and Cristobal Mendoza, the projected light of Gary Justis and the language play of San Francisco’s Helen Lee, and abstract sculptor Michael Young. The Neon and Light Museum is an expansion of the On Neon show presented in 2020 by the Ken Saunders Gallery. More here.

Real estate developer Robert Meers took on challenges other developers didn’t see worthy, reports Crain’s. “‘Though he was polished, he could push all the right buttons, get it done, whatever it took,’ says Ward Miller, executive director of Preservation Chicago. At sixteen stories, the Burnham and Root/Holabird and Roche-designed Monadnock was the world’s largest office building when completed in 1893. But by the time Meers and partner Bill Donnell took on the challenge in the late 1970s, it was headed for foreclosure after losing tenants and suffering… remodeling indignities: lobby staircases removed, fluorescent lighting installed, entrances added. The back-to-the-original plan guided subsequent top-to-bottom projects, including LaSalle Street’s Rookery, according to Miller. ‘It was a very radical idea at the time. Nobody knew what the general public would think of these full restorations.'”

Amazon plans a delivery station on the former Central Steel site in Gage Park after paying $35 million, reports Crain’s, “part of its push to expand its distribution network to keep up with surging online sales and speed up delivery times.” It will be “a warehouse that serves as the last stop for packages… before they’re delivered in vans to customers’ homes… The facility will open in ‘a couple years.'”

A garage with delayed structural repairs at a noted fifty-seventy-story Gold Coast condo tower on Chestnut Street has been shut down, reports Dennis Rodkin at Crain’s. “Last week’s report of delayed structural repairs at a high-profile Gold Coast address kindled fears [of a Surfside-style disaster], but the situation here is different…. City officials moved quickly to shut down a Gold Coast garage last week, reassuring residents of the condo tower above it.”

The California Clipper Reopens This Fall

Humboldt Park’s California Clipper will reopen under a new management concern, the Orbit Group, Block Club Chicago reports, as will the former Café Marie-Jeanne space with a bar and Italian-themed restaurant. “The two establishments will be run by Orbit Group’s chef and partner Matt Troost, formerly of Three Aces and Charlatan, beverage lead Kristina Magro, who’s worked at Lone Wolf and Prairie School, and Ben Fasman, from Sao Song, Estero and Big Star. Fasman will serve as general manager of the Clipper.” “We want to see this corner of the city come back to life,” marketing director Jessica Garza tells Block Club. “The hospitality industry took a huge hit… We want to help bring [it] back to life over here, and do what we can for it.”

“It’s important that we get families back in the Loop,” says a manager for the Berghoff restaurant and its Adams Street Brewery, reports the Sun-Times. “Like many restaurants, the Berghoff lost some of its staff due to the pandemic’s budgetary impact, with happy-hour and lunch crowds scarce during the past year.”

New York and Pennsylvania abruptly removed mandates allowing to-go liquor, reports Eater Chicago. At least fifteen states have made to-go liquor sales permanent, according to the Gothamist. Eater: “In an ideal world, governments would see that many restaurants still need to be markets and wine shops and casual liquor stores to generate the minimum required to stay open. In the absence of that leniency, restaurants will have to adapt again with the hope that they can endure whatever comes next, even if there’s no warning.” No report from either source on the fate of booze-on-wheels in Pritzker’s Illinois or Lightfoot’s Chicago.

The Underground Chicago is enthused about its  reopening. “The Underground’s reopening over the weekend of July 16-17 heralds the return of Chicago’s nightlife. ‘The pandemic has wiped out many live music and nightclub venues across the country'” the Underground quotes Billy Dec in a release. “Historically, nightclubs have had a pivotal role in cultural evolution. The Underground family fought to stay alive and reopen because we see it as a major responsibility—it’s our duty to elevate our community platform so people can come together to celebrate music, fashion, dance, art and design. .. We look forward to constantly elevating and innovating our industry and The Underground experience fueled with excitement, creativity, service and positive energy.” The release continues, “Just as the country’s emergence from the influenza pandemic of 1918 brought about the Roaring Twenties, Dec and the Underground team are launching a secret new sister venue inspired by the Roaring Twenties called The Underground Cocktail Club. Set to open Lollapalooza weekend, the cocktail club will be housed in the same building as The Underground, but with a separate entrance and will evoke an elevated feel of the twenties with an explosion of color and a heightened focus on cocktails and live performance with a 1920s-decorated stage over and behind the bar.” Details are forthcoming here.

Women’s Financing Intensive, from WIF & Sundance Institute, has chosen twelve feature film projects to provide tailored support, including “The Untitled 19th* News Film,” produced and directed by Heather Courtney, Princess Hairston and Chelsea Hernandez, with Diane Quon [Newcity Film 50]. The initiative equips filmmakers with financing strategies and introduces them to leading financiers. The story of the untitled film: “In 2020, a fearless group of journalists, seek to upend the status quo of the mostly white, majority male legacy newsrooms by launching an all-women and non-binary news start-up. Building a newsroom that reflects the communities they’re writing about, The 19th* News could be a model in these changing times.” More here.

Blair Kamin remembers former Tribune business reporter and columnist Bill Barnhart of almost three decades as “a wonderful man and consummate pro.” The Trib obituary: “‘He was the consummate professional who was very knowledgeable and very humble,’ said Mary Jane Grandinetti, a former Tribune business editor… ‘I think that Bill’s greatest contribution to all the people who worked with him over the years was to instill in a lot of people to do the job the correct way,” said former Suburban Trib reporter Tom Witosky… Barnhart took a job covering business for the Chicago Daily News in 1976. ‘Bill was unperturbed, unhurried and always made his deadlines,’ wrote former Chicago Daily News business reporter Dan Miller… ‘He was a steadying influence when investors and readers needed clear, accurate reporting.’ After the Daily News folded in 1978, Barnhart moved to the Chicago Sun-Times. In August 1979, Barnhart joined the Tribune as a business reporter, and in 1983… began writing a column… ‘The Bottom Line.’ His reputation as an unflappable performer was maintained in all his roles.” Crain’s publisher and executive editor Jim Kirk: “a kind soul and wicked sense of humor. A wonderful colleague and mentor.”

Rate hikes posed by U. S. Postmaster General Louis DeJoy “could present one more damaging blow to community newspapers already reeling from the coronavirus pandemic and advertising declines,” a trade group tells AP. “Rates on periodicals would increase by more than eight percent as of August 29, according to agency filings. The price jump is part of a broad plan pushed by DeJoy to overhaul mail operations. The impact of the periodical rate increase is expected to be felt most by small daily and weekly newspapers, as well as rural newspapers, which depend on the Postal Service since they have shifted from using independent contractors for deliveries. In response, publishers potentially could be forced to further reduce staff or forgo home deliveries entirely and instead send papers to communal news racks, or even shutter their papers.”

Victory Gardens Theater will hold a series of free Town Halls to introduce artistic director Ken-Matt Martin to the Victory Gardens community and discuss Victory Gardens’ future. The first event, “Ask Me Anything with Ken-Matt Martin” will be on Zoom on August 2. “Community members will have a chance to ask Ken-Matt questions, to hear his vision for the theater’s artistic future, and to meet some of the artists who are part of the next wave of Victory Gardens’ work.” “During the first weeks of my tenure at Victory Gardens, I embarked on a ‘listening tour’ to connect with Chicago artists who have been deeply connected to the Chicago theater community, in order to talk about the history, celebrate the artistry and craft a new future,” Martin says in a release. “These town halls will welcome people together, including those who already love Victory Gardens and any new or curious patrons and artists—to express their thoughts, to ask questions and to learn what is in store. As we plan to welcome back audiences to our venue during the upcoming season, we strive to inspire meaningful civic change within our city and nation and live up to the values of the theater. These town halls are the first step in joining together in communication, shared vision and community.” RSVP here.

Vroom With A View: Big Auto Shows Pull Up To Chicago

The Chicago Auto Show returns: “Manufacturers have been unveiling new product for the past year with little public exposure since most major auto shows were canceled,” reports Crain’s. “The Chicago show is not a complete return to the pre-pandemic era, but it will be close. For starters, there will be a media preview the day before the show opens to the public. Jeep and Volkswagen will hold press conferences, and vehicle presentations are scheduled by Ford, Kia, Lexus, Nissan, Ram, Toyota and Volkswagen. No splashy vehicle reveals are planned, but just having physical presentations after so many virtual ones is a step forward.”