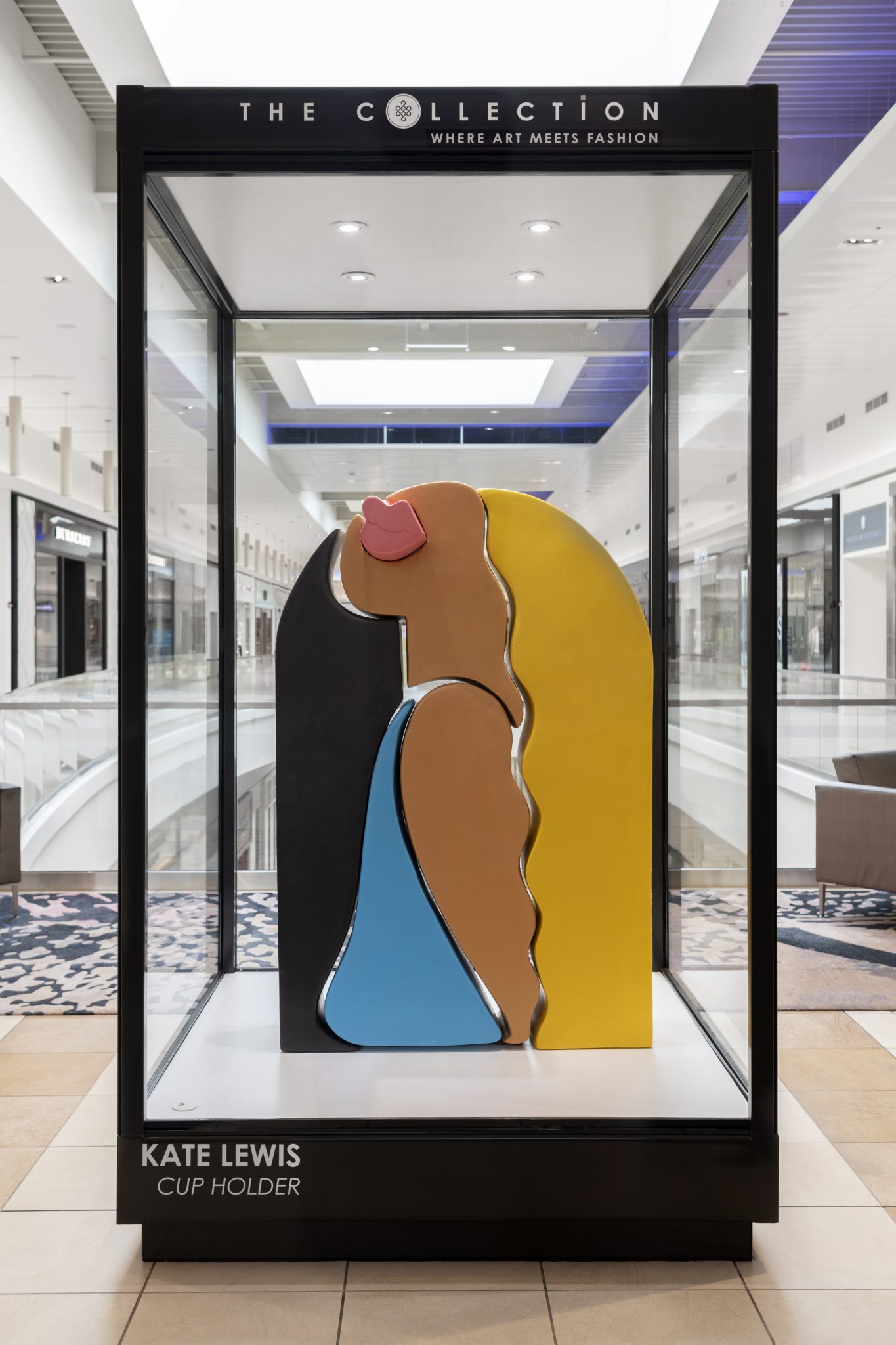 “Thought Vortex,” the twelve-foot-high sculpture by the first winner of the Chicago Sculpture Exhibit’s Richard Hunt Award, 2018 School of the Art Institute of Chicago graduate Gwen Yen Chiu, has been unveiled at the intersection of Lincoln, Fullerton and Halsted, reports Nichole Shaw at the Sun-Times. “I sketched the piece out when all the Asian hate crimes started happening in the U.S.,” said Chiu, twenty-eight. “I started thinking about the BIPOC community, immigrant families and all the first generations here, and it was just all these thoughts. And that’s kind of what the vortex is representative of — these never-ending thoughts.”

Chicago artist Kate Lewis has installed her first sculptural works, collectively titled “Functional Art,” at “THE COLLECTION: Where Art Meets Fashion” at Fashion Outlets of Chicago, where they will be on display through the end of the year. Known as a muralist, Lewis’ work can be found across the United States, notably a 180-foot section of the Chicago Riverwalk, a mural within Wrigley Field and full-building mural wraps in New Buffalo and Las Vegas. Her first foray into sculptural works, “Functional Art” is inspired by the playfulness and borderline impractical nature of chunky, yet sleek, Art Deco and Modern furniture styles. Blending her signature geometric and architectural line work styles, Lewis uses patterns and illusions to create pieces that challenge the viewer’s perspective, both figuratively and literally.

“Virgil Abloh — the fashion designer, DJ and pundit of pop culture — is about to become the most powerful Black executive at the most powerful luxury goods group in the world,”  reports Vanessa Friedman at the New York Times. “LVMH announced it was acquiring a sixty percent stake in Off-White, the luxury streetwear brand Mr. Abloh founded in 2013 and which he still designs, alongside his job as artistic director of Louis Vuitton men’s wear… Mr. Abloh, 40, will be taking on a bigger role within LVMH, working [in] Wine and Spirits (LVMH owns Krug, Dom Pérignon and Hennessy, among thirty brands) and Hospitality (more than fifty hotels, including the Cipriani in Venice and Le Manoir aux Quat’Saisons in Oxfordshire), smashing silos and bringing more diverse voices to a variety of brands. ‘I’m getting a seat at the table,’ Mr. Abloh said cheerfully, speaking by Zoom from Chicago, where he lives.”

The City Council’s Finance Committee agreed to earmark $60 million to build city streets, a new park and other infrastructure needed to pave the way for the “Bronzeville Lakefront” project, reports Fran Spielman at the Sun-Times.

“For the last few months, passersby have seen people coming in and out of Fat Rice, the Logan Square restaurant that closed in June 2020 after workers painted a picture of a toxic work environment under owners Abe Conlon and Adrienne Lo,” reports Eater Chicago. In August, Conlon and Lo are opening NoodleBird at the location, which will serve Fat Rice dishes such as egg tarts and pork and ginger dumplings. Louisa Chu reports at the Trib: Lo tells Chu, “NoodleBird is our transformation concept.” Conlon adds, “It’s an Asian-inspired diner that serves the casual street food of Macao and other multicultural Asian countries.” Chu asked what they had been doing since closing the restaurant under a cloud. “A lot… We’ve been working with great professionals that have helped develop ourselves and our team so that we can be better leaders.” Lo: “We have been working with a great HR partner,” she said. “We realized we weren’t necessarily the best with managing people.”

Restaurant-bar The Duplex, just opened at 3137 West Logan Boulevard, will feature rotating menus from micro-concepts, giving local chefs who otherwise would not have the resources to start their own restaurant the space and opportunity to showcase their talents. Owner LeQoinne Rice wants an equal and transparent workplace for employees, so has created a position-less environment with an optional pooled-tip model for both front- and back-of-house workers, along with plans to provide healthcare in the future. The opening menu includes fried-chicken sandwiches from The Kluckerz; Mexican-inspired cuisine from Lime and Radish; and a collaborative weekend brunch menu from partner chef David Rodriguez (formerly of Whisk and Son of a Butcher) as well as two tenant chefs. The Duplex aims to rotate the resident menus and concepts every six months. Live music and local DJs are featured, along with margarita pitchers. Menus and more here.

Edison Park’s Zia’s Trattoria plans to close its location in September and reopen as Zia’s Social in Norwood Park in October, reports Block Club Chicago.  Executive chef and co-owner Joe Calabrese “also owns Café Touché in Edison Park with his wife. The couple also owned Zia’s Lago Vista in Lakeview, which is being replaced by a five-story apartment building. Calabrese said he wants to give back to the neighborhood where he grew up.” “The neighborhood is ready for a restaurant,” Calabrese tells Block Club. “There really has been nothing but pubs and taverns in this neighborhood up until now. To bring in a food-driven place is our vision.”

Foxtrot’s got tens of millions to spend to take over storefronts that merchants were forced to vacate because of COVID-19, reports Lauren Zumbach at the Trib. “Chicago-based upscale convenience store startup Foxtrot is doubling down on its expansion with plans to open 50 new stores within the next two years,” she writes. “The company, which has nine Chicago stores and two each in Dallas and Washington, D.C., raised $42 million in funding in February and said it would have 19 stores by the end of the year.” Foxtrot now wants sixty-three locations by the end of next year. “Foxtrot has been growing during the COVID-19 pandemic and saw opportunities in empty storefronts left vacant as other retailers struggled, said CEO and co-founder Mike LaVitola. ‘We know how important getting that right location is.'”

Run For The Shortage At Taco Bell

Taco Bell cops to the nationwide ingredient shortage and supply disruptions, reports WGN-TV. “Sorry if we can’t feed your current crave,” Taco Bell, owned by Yum Brands, posted at the top of its site, WGN’s Nexstar newswire observes. “Due to national ingredient shortages and delivery delays, we may be out of some items… Due to national transportation delays happening throughout most of the industry, we may temporarily be out of some items. Apologies for the inconvenience and we hope to feed fans’ current Taco Bell cravings again soon.”

The Chicago Digital Media Production Fund has awarded a total of $100,000 in grants to eight Chicago artists for the production of their socially progressive web series, short films and a narrative podcast. An independent panel of twelve film community peers and media professionals reviewed submitted proposals. Digital media of any length or genre were eligible, as long as they addressed social justice issues or represented  points of view of those historically marginalized by mainstream media, be appropriate for youth, and be made available for free online in order to reach the widest possible audience. All projects are scheduled for completion by July 28, 2023, and will be online for the public to access in the following year. The projects: “The Untold Stories of Terrence & Avelah,” Maxwell Emcays, $20,000; “Even Saints Bleed,” Sar Cohen, $15,000; “Half Truths and Full Lies,” Tirtza Even, Meg McLagan, Elyse Blennerhassett, $15,000; “Whole + Six Feet Apart,” Monty Cole and Isaac Gómez, $15,000; “My Mother Is An Artist,” Maya Horton and Julia Mondschean, $12,000; “No Shelter,” Harley Foos [Newcity Film 50] and Rozalinda Borcila, $12,000; “Tarak,” Sankalp Raju, $7,750; and “The New Girl at School and Other Terrifying Horrors,” Ali Abbas, $3,250. More here.

The iO comedy house’s longtime owner, Charna Halpern, has sold the building and the iO brand to a pair of local real estate executives, reports the Sun-Times. “The buyers, Scott Gendell and Larry Weiner, intend to reopen the space at 1501 North Kingsbury and resume offering improv shows and classes.” Halpern did not cite the price for iO, which had listed earlier for almost $13 million. Halpern “closed iO in June 2020, citing the absence of revenue and the ongoing expenses of property taxes, utilities and two mortgages during the pandemic-related shutdowns of all live theater in the city.” Halpern told the paper that the new owners want to reassemble former management, and she’s open to helping. But “I don’t want to be a boss or anything like that.”  Halpern told The New York Times: “It’s a huge relief that this thing I’ve been working on for 40 years is going to continue.” “For Halpern, who has run the theater from the beginning and — along with her partner Del Close — helped transform improvisation from a marginal art form into a bustling business, it is unclear what her role will be going forward… ‘The other day I turned over the keys, and when they walked me out and said, “Thank you, Charna,” it was the first time I cried. It really hit me.'” No opening date on the horizon: relicensing the bar and restaurant is required and the roof requires extensive repair.

Critical Context, a new writing residency in partnership with the Harris Theater for Music and Dance, will host the 2020 See Chicago Dance Fellows, D’onminique Boyd and Tristan Bruns, for a paid residency program. Beginning this fall, the Critical Dance Writing Fellowship program, which launched in 2020, in partnership with the JOMBA! dance festival in Durban, South Africa, will feature writers from four countries gathering virtually from August 16 – September 5. For information, sponsors and more go here.

“Summer Of Stories” Comes To Parks On South And West Side

PlayMakers Laboratory will present “Summer of Stories,” free theater performances for children and families, from July 26-28 in parks on Chicago’s South and West Sides. The shows feature stories written by Chicago students during creative writing workshops conducted by PlayMakers Laboratory  in conjunction with Chicago Parks Summer Camps. The stories are adapted for the stage and performed by PML company members, under the direction of artist director Brandon Cloyd. More here.

So few days left but so many events here.

Illinois Caverns is reopening, reports the Trib. “A tourist attraction dating back more than a century, the Illinois Caverns is the second largest cave in the state. In 2010, officials closed the cave to the public in an effort to slow the spread of white-nose syndrome, a fungus that kills bats… The Illinois Department of Natural Resources announced the cave would reopen after more than a decade. Now, visitors can once again don hard hats and wade through an underground stream to explore the cave’s geological treasures.”