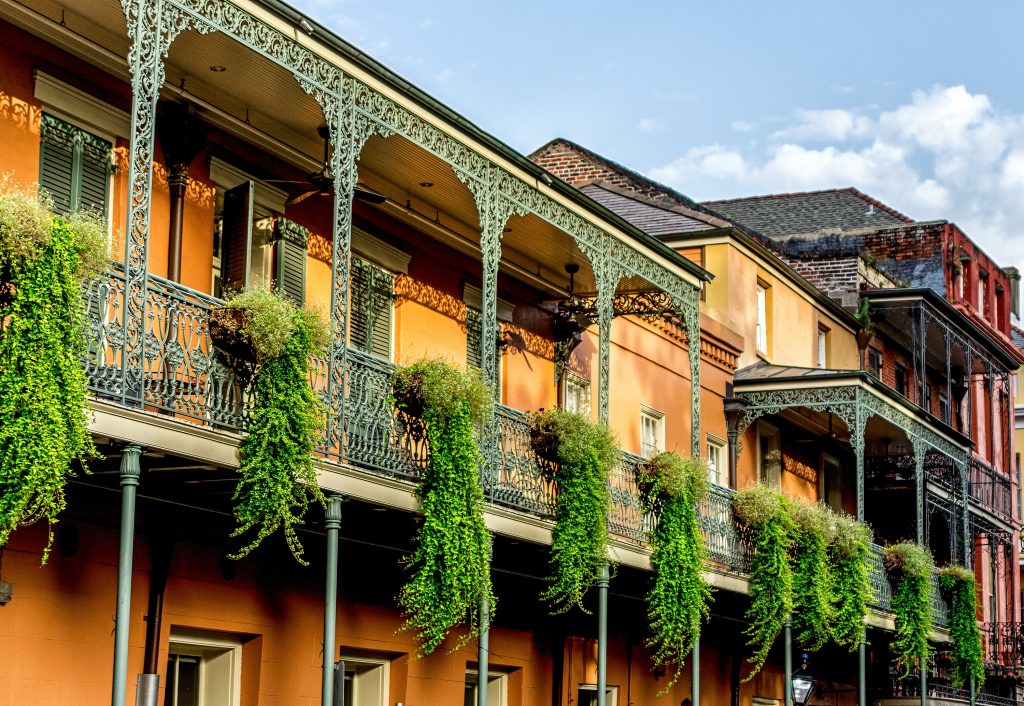 It was mid-afternoon in New Orleans and so humid that the inside of my head felt like a sponge. Walking through the French Quarter along Bourbon Street, I gazed at a man wearing a black tunic, riding a unicycle, with the rainbow flag painted on his shaved head. I saw another man, dressed in pirate garb with a green-and-yellow parrot on his shoulder. Happy Hour in New Orleans. I continued past the parade of outdoor bars and turned on Dumaine Street toward the New Orleans Historic Voodoo Museum. Inside the dark room I saw a collection of dolls, gris-gris and carved wooden figures, some dating back to the eighteenth century. A collection of altars combined Catholic symbols like crosses and plastic statues of Jesus with symbols of the voodoo religion and items like cigars, rum bottles, money, dice and beads. A human-sized skeleton with a top hat, perhaps representing Baron Samedi, and an alligator’s head, decorated with beads, peered out from the wall.

Standing underneath a painting of Marie Laveau, I told the caretaker how I had been interested in the subject since I was a teenager. Growing up in Chicago I heard songs like Muddy Waters’ “Got My Mojo Workin,” Junior Wells’ “Hoodoo Man Blues” and Lonnie Brooks’ “Two Headed Man” so much that I learned how to play them, which in turn led me to reading books on the subject and striking up a long friendship with Papa Doc Pulaski, who owned a voodoo shop in Chicago. The caretaker and I kept talking, between groups of tourists shuffling through. I even took out an old wooden harmonica I kept in my travel bag and demonstrated a few riffs.

As if somebody turned out a light, the sky darkened. The wind banged the house’s old wooden shutters. Thunder roared and lightning flashed. Hot raindrops exploded off the sidewalk like fireworks. Horses pulling carriages veered off their paths. Drenched tourists tried to continue their drunken revelry on the streets and bar patios. The few visitors still at the museum left. I headed toward the exit. But the caretaker stood before it.

“You are an artist and a special person,” she said. “Stay and rest until the storm passes.“

She led me to the back and opened the door to a sheltered area. Filled with sandy brick, ferns and cast ironwork, it was a typical French Quarter courtyard. She pointed to a white wicker couch. “You can stay here.” The storm continued. The staff locked the doors and closed the museum. The driving rain banged off the tin shelter. Putting my head back I realized I was alone with a group of strangers, inside the Voodoo Museum.

I could hear the footsteps of the staff members walking on the old wooden floor, and muffled conversation. A white woman with tattoos, wearing black, large earrings, goth in a time before it was mainstream, walked back to the courtyard. She asked me to play my harmonica and I did.

“These songs all talk about black cat bones, mojo hands, ‘fixin’ people, and casting spells,” I said. This was the culture they grew up with and they put it into their songs. But I later learned the difference between voodoo and hoodoo. Hoodoo is the more commercial form, with practitioners charging money for charms and spells. This is probably what made its way up to Chicago.

Outside the storm raged. The rain was pounding vertically, horizontally—in all directions like a child scribbling with a thick leaded pencil. The woman who I was talking to told me she did not work there but served as a volunteer.

“People come in here asking if we can turn somebody into a zombie or asking if the voodoo dolls can get up and attack people,” the woman said. “A lot of them want to know how to put curses on old boyfriends. They think this place is like something out of ‘Tales from the Crypt’ or some late-night movie. Voodoo is a religion that is based in Africa and has been practiced for hundreds of years. We are a community here in New Orleans that has the same beliefs and practices going way back, but people look at us like we are strange or freaks or get scared and run out the door, not even taking the time to find out what we are really about.”

We continued talking about the city of New Orleans, my vacation, and the history of the city as they tidied up. I closed my eyes. I hesitated. What would happen if I fell asleep? With my head resting against the pillow on the white wicker chair I remember dreaming. When I awoke the air was somewhat cooler. I could still hear talking inside. Worrying about catching a plane the next morning I walked toward a gate and let myself out onto Dumaine Street without thanking them. The storm had stopped but the streets were still empty. Waiting for the St. Charles streetcar I was warm and dry. I thought of how nice everybody was to me, trusting me and providing shelter while they closed up. As the streetcar approached I thought of a line from a famous play, something about… “the kindness of strangers.”