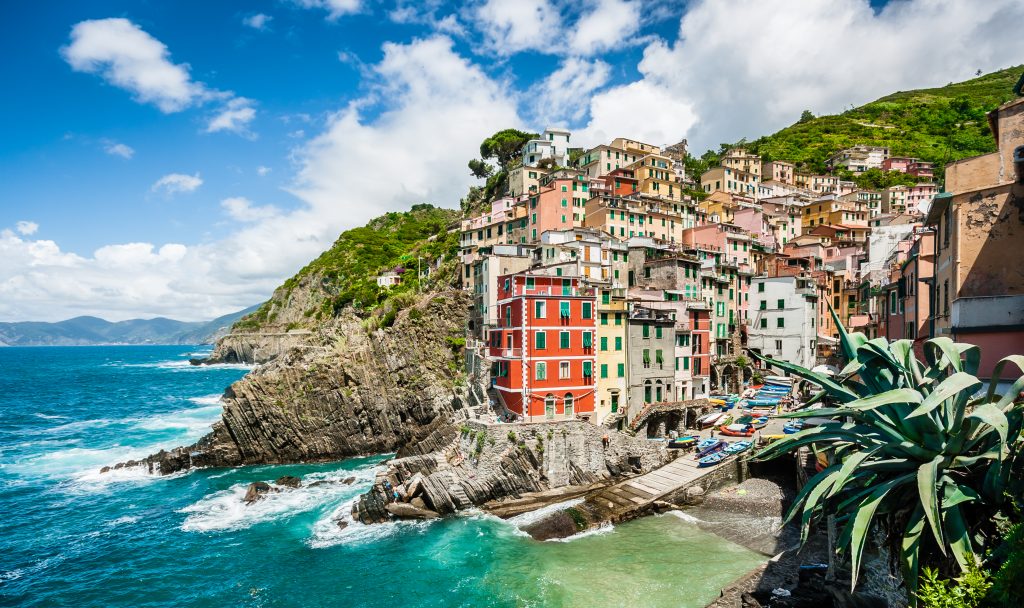 Riomaggiore, one of the five famous fisherman villages of Cinque Terre in Liguria, Italy.

In Italy, August 15 is a national holiday; it’s called Ferragosto, from the Latin Feriae Augusti, referring to the festivals of the Emperor Augustus (though these days it’s a celebration of the Virgin Mary). Italians not only take the day off; they take a large chunk of the month surrounding it as well, and head to the country’s coastal resort towns. This phenomenon is so pervasive that if you visit any major Italian city in August, you’ll find only dazed tourists wandering through ghost towns.

Not only will Italian families return to the same resort every year (usually renting the same beach house), entire neighborhoods will move en masse—with the result that when they wake up in the morning and go out to greet the day, they see the same faces they’d see over their backyard fences at home. They exchange the same gossip about the same people, cook the same meals they cook at home, drink the same cocktails and watch the same TV shows. In the truest sense of the word, this is a vacation (in Italian, vacanza); all these city dwellers have really done is packed up their lives and moved them somewhere else. In every other respect their days play out exactly the same.

There must be something, then, about the act of leaving behind a physical space that provides renewal. The phrase “going on vacation” puts the emphasis on the act of desertion; a destination is only hazily implied. Compare this to the British, who don’t go “on vacation;” they go “on holiday.” The emphasis is on where they’re headed, not what they’re leaving behind. For Britons, it’s a journey; for Italians it’s an abandonment. The Brits aim toward; the Italians flee from.

Americans, of course, go “on vacation” as well, and with similar implications. But for us, the concept has an additional, psychological element. Unlike Italians, we’re attracted to the idea of slipping not merely our physical moorings, but our histories, reputations and behaviors. A new setting becomes an invitation to try out a new self. Since you’re only away for a week or two, the risk of a failed reinvention is diminished; you just abandon the new identity when you return. In fact, the briefness of the time span seems to embolden vacationers to make choices they wouldn’t ever make at home; the unsustainability of the new self becomes its chief attraction. At least one American city where the economy is fueled by tourism has not only recognized this, but made it an official slogan: “What happens in Vegas, stays in Vegas.”

This summer is different, because the places we’re vacating are our most intimate interior spaces. We’ve been shut up, in varying degrees of isolation, for more than a year, and the identities we’ll be trying out are the ones we haven’t used since the spring of 2020; we’re hoping they still fit (or in some cases, hoping they don’t). This summer, more of us will be going both on vacation and going on holiday—eagerly leaving behind the confines of our physical and spiritual four walls, while also actively seeking to find who we’ve become by weaving that recovered self into the greater tapestry of a newly reawakening human society.

In that sense, then, it’s not really a matter of going “on vacation” or going “on holiday”; it’s a matter simply of “going.”